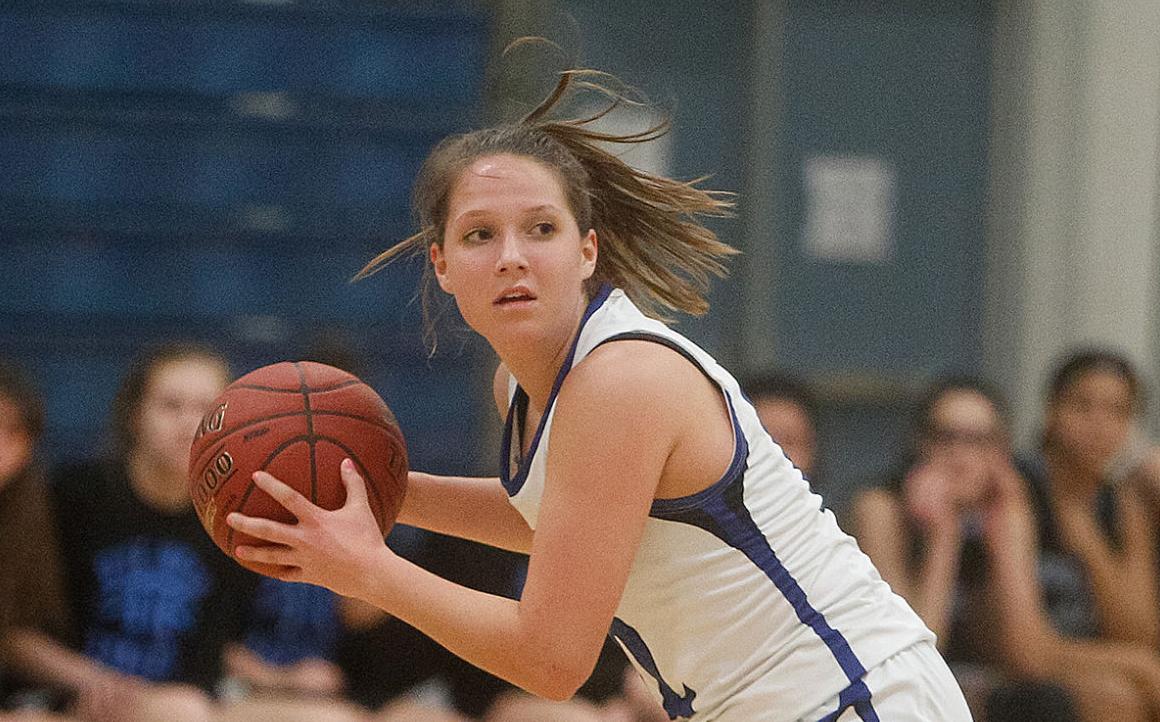 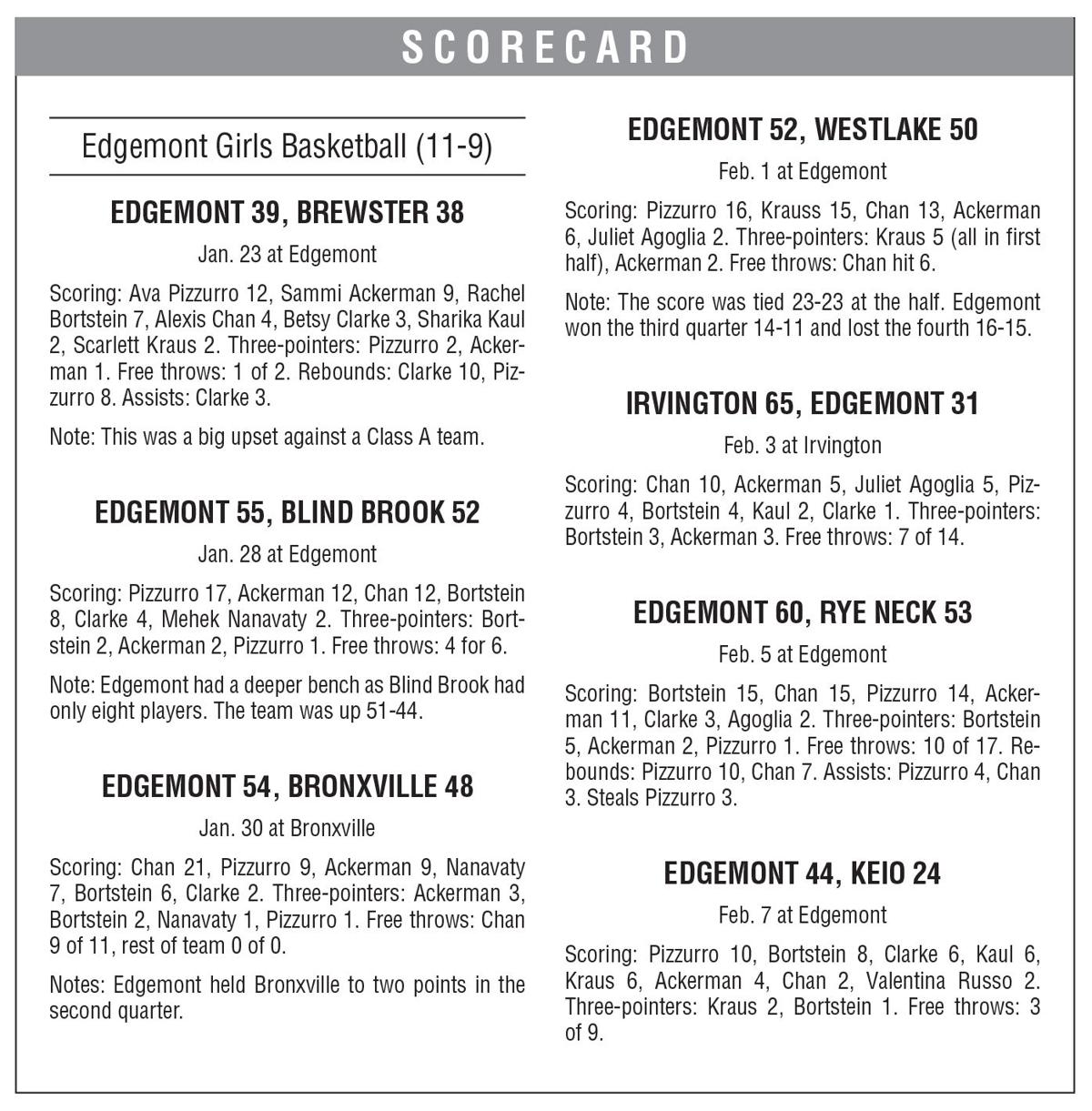 When Alexis Chan was an eighth-grader in her first year on the Edgemont varsity girls basketball team, her coaches decided that since nothing else was working, they’d try something new. For two years, Edgemont ran a variation on Grinnell College’s “The System,” where offense was king and the more you shot the more you had a chance to rack up points.

That meant the next year when then-freshmen Sharika Kaul and Ava Pizzurro and then-eighth-graders Sammi Ackerman and Rachel Bortstein joined the team, they also were indoctrinated with a fast-paced, shoot-the-ball mentality.

“All holdovers from the very popular ‘System,’” joked Larry Giustiniani, who was then assistant coach to Mike Tracy, whose idea it was to go rogue and change things up at a time when traditional basketball wasn’t serving Edgemont well.

For the 2017-18 season, Edgemont went back to a regular style of play and shared a league title with Bronxville, the program’s first since 1982. Last year and this year, Edgemont won the title outright. That’s not because they stopped playing their variation of “The System,” but because they did it in the first place.

“We owe Mike Tracy, whose idea it was, a debt of gratitude and that’s not a friend trying to make someone feel good,” second-year head coach Giustiniani said. “I thought about it recently. I’m watching some of the kids come up and there is a bit of a hesitancy to shoot the ball sometimes, a bit of, ‘I missed, I feel terrible.’ I’m seeing it.

The times have changed for sure, but the core of that “System” team now has three league titles to proudly display on a banner that wasn’t added to for decades. Prior to the title three seasons ago, Edgemont only had four others, so now they are one away from doubling that number.

“It means a lot to them because they don’t have a lot of things in their trophy case, no gold balls here, no sectional semifinal memories,” Giustiniani said. “I think for the most part the kids accept themselves as student-athletes at an academic first and second and sports third type of culture gladly and happily. When they get a chance to play and be part of something it means a lot.”

The Panthers did something Giustiniani doesn’t recall ever having happened against Rye Neck in a huge win that helped clinch the league on Feb. 5: Edgemont had four scorers in double digits. Of course it was four of the girls who grew up in “The System” era — Bortstein with 15, Chan 15, Pizzurro 14, Ackerman 11.

“When I see the new kids coming up they’re great kids and basketball is well and alive here, but you see that not wanting to miss,” Giustiniani said. “I don’t think Sammi Ackerman or Rachel Bortstein have met a shot they didn’t like in the last three years and that’s because they’re just liberated. They don’t hesitate. They’re juniors and they were eighth-graders then. They’ve won games for us because of clutch threes. They’re not afraid.”

As impressive and exciting — and key to the win — as all the points were, Giustiniani said, “There were other parts that each one of them contributed that made me proud as a coach,” adding, “Ava I’ve seen score six when playing 30 minutes, when she might have 15 rebounds, six assists, three steals, a block, a charge. Everybody is starting to do that stuff. We call them ‘will plays.’ We have a will drill at practice where it’s all about rebounds, loose balls.

“Alexis is getting to the line and making them. And we have lots of assists that game. And Sammi does so much off the bench.”

Strong down the stretch

Two of the big games that really got Edgemont rolling were a 39-38 win over Class A Brewster and a 55-52 win over Blind Brook, a team that topped Edgemont earlier in the season 69-63 in double overtime, back-to-back Jan. 23 and 28. In one game the Panthers were fighting back and forth for the lead and in the other they were fighting to hold a lead.

Both times Edgemont got the job done at home.

“Obviously it feels good to win,” Pizzurro said. “We’re all keeping each other up and we all have each other’s backs. We’re staying positive and not getting ahead of ourselves while we’re winning. We’re understanding the feeling of winning at keeping that composure, staying calm.”

Two other key seniors, Kaul and Betsy Clarke, had big moments to help hold off Blind Brook between breakups, steals and rebounds. Clark also had four big points in the win.

“Everyone is stepping up and doing what they’re supposed to,” Pizzurro said. “Betsy and Sharika are big components of that.”

Against Brewster, Pizzurro, Ackerman and Bortstein all had key baskets in the final two minutes.

Edgemont was able to handle a full court press from Brewster and played defense and got the baskets down the stretch. Pizzurro hit a three-pointer with two minutes left to go up by two. With 36 seconds left, Ackerman’s three gave the team the lead back and with seven seconds left trailing by one, Bortstein drove to the basket to score the winning basket.

“They were loose and free and easy,” Giustiniani said. “I guess they felt like they had nothing to lose, that they weren’t supposed to win that game. It really was terrific to watch. This is a really unselfish team. They’re really good kids. They buy into what I want without any questioning of any kind. They listen to me like, ‘You’re the coach, we trust you, we’ll do what you want.’ Nobody needs to be the star. Nobody needs to be the best on the team. Nobody is going for any point total.”

Staying calm was key, according to Pizzurro. “If we lost ourselves and started going crazy we wouldn’t have had it,” she said. “We learned more how to stay calm and composed. We know we have the skills to do it. It’s fun knowing we all can score, we all can do it. We’re a well-rounded team skillwise.”

The team was able to use the Brewster win to push them to the next win over Blind Brook. In the end, Edgemont won 6 of 7 games to end the season, the long loss being to powerhouse Irvington, which Giustiniani said “rearranged our furniture.”

“One of our early goals was to win the league,” Chan said following the Blind Brook game. “Knock on wood I hope we can do that… If we sweep we win it clean. That would be the first time ever winning three in a row and two years ago was the first time since 1982. It would be really big, really exciting. Then in sectionals, postseason, we want to do as well as we can.”

Kaul and Clarke made big hustle plays and rebounds late in the Blind Brook game to help the Panthers keep a 51-44 lead and earn a three-point victory.

“Shark is a true unsung player that you don’t get in the box score,” Giustiniani said. “She sets great screens. She opens up and rolls perfectly off those screens, which is so important to the person getting that screen to know someone is always going to be there. That’s not always the case. She rebounds and keeps balls alive from tipping them away from people. Defensively she’s 100 percent on every play. I don’t even know what she scores and that’s a cherry on top.”

Clarke brings a similar skill set to the floor. “Betsy will allow how she’s shooting to affect her and I had to point out to her that she’s the leader in rebounding, steals, deflections and assists,” Giustiniani said. “I had to actually tell her about those things because people think the game is the ball in the net — either you did it or you didn’t do it. But they still have a big role.”

And it’s not just the veterans doing damage. Sophomore Scarlett Kraus got a start Feb. 1 against Westlake — a 52-50 win — and scored 15 points to go along with 16 by Pizzurro and 13 by Chan. Kraus was on fire in the first half, hitting five three-pointers for all of her points.

The Panthers needed a starter against Bronxville in the previous game, a 54-48 win — and while Kraus didn’t see much time, Giustiniani had her on his mind, so when he needed someone for Westlake, he knew that her competitive nature would “give me a good game if I started her.”

“She’s been burning to play and she started out 5 for 5 from three,” Giustiniani said. “The coach for Westlake called a timeout and went box-and-one on Scarlett Kraus. After the game he goes who is 21?”

Kraus is a second-year varsity player and she’s been trying to make the most of her playing time on a veteran-dominated roster. The minutes were up and down until her big start.

“It was really exciting and I’m glad I played well,” she said. “I hadn’t been shooting that well this season, so it was good to get it going.

“I really worked on shooting with Coach [Mike] Cozza before the game started because I felt like I was off and I think that really helped.”

While the seniors and juniors have been dominating the playing time, Kraus understands what they mean to the program, and next year’s team certainly doesn’t want to be the team that breaks the league title streak.

“It’s going to be hard without them next year, but we have people coming up from JV and hopefully we can keep it going,” Kraus said.

More important, however, is the upcoming postseason.

“We just need to keep playing hard during practice and hopefully get some scrimmages in so we can keep in a game mindset,” Kraus said. “The hope is to get a home game, win and keep going.”

As he did earlier in the season to help turn the team’s fortunes around on and off the court, Giustiniani will look to his captains to set the tone in the postseason preparation, which will feature scrimmages, conditioning and going back to the basics. “It’s my hope to be able to create a second season environment and lean on the captains and seniors again,” Giustiniani said.

Edgemont was an opponent teams used to schedule when they were looking for a win. Now the target the Panthers have on their back, especially within the league, is because they’re having trouble beating Edgemont.

“Everyone really comes after them in the league,” Giustiniani said. “This is their county center, trying to beat Edgemont for the league. None of us are playing for that other stuff. This is it and they brought their best, a strong effort from Bronxville and Blind Brook. These are tough games. People are having great shooting games against us. Each team has been better the second time and I’ve been complimenting each coach. People are getting up for us.”

And Edgemont is responding accordingly.

No. 9 Edgemont will be at No. 8 Bronxville Thursday, Feb. 20, at 5 p.m. for the first round of the Section 1 Class B tournament. The Panthers topped the Broncos twice this season in league play.