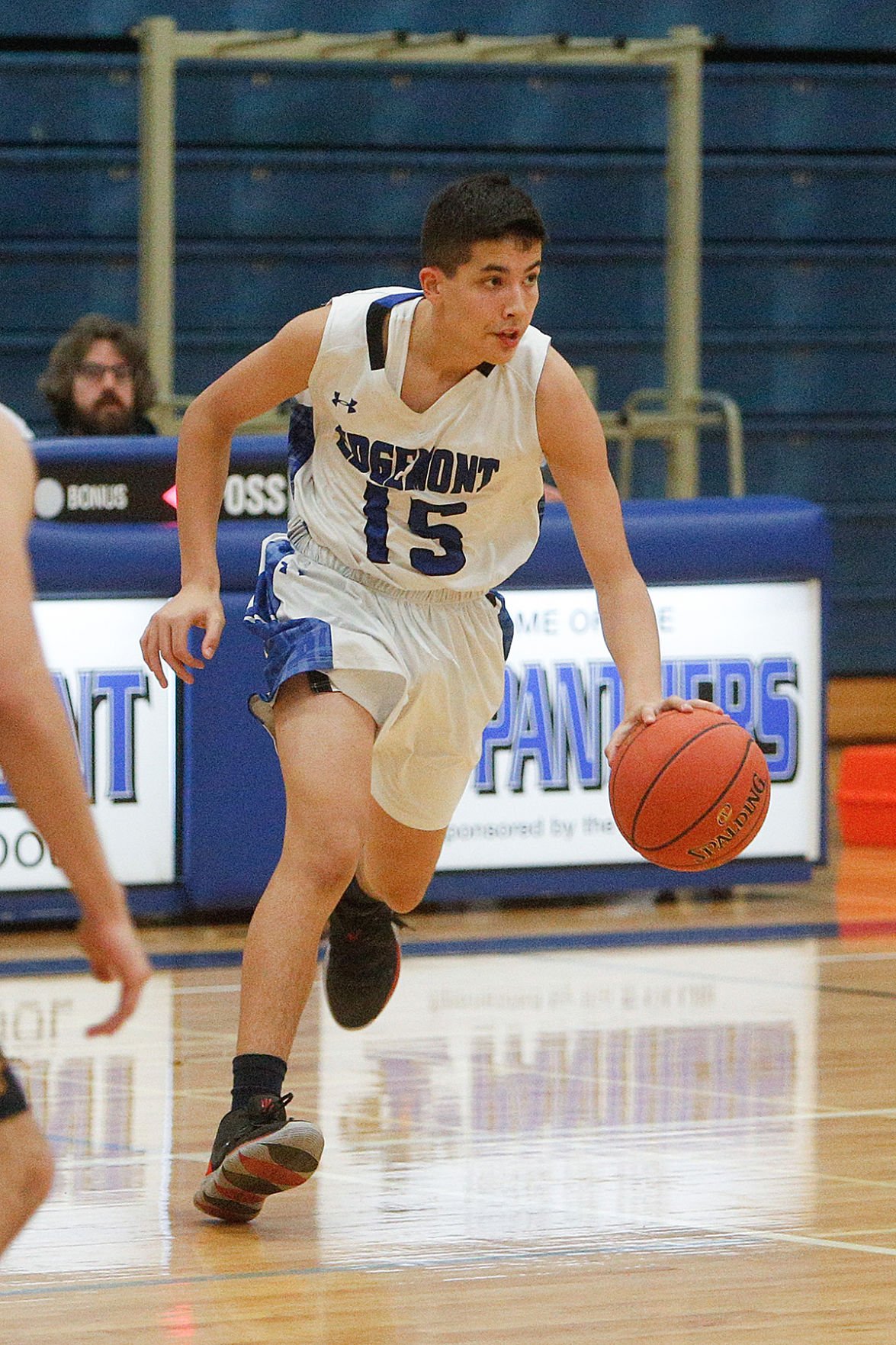 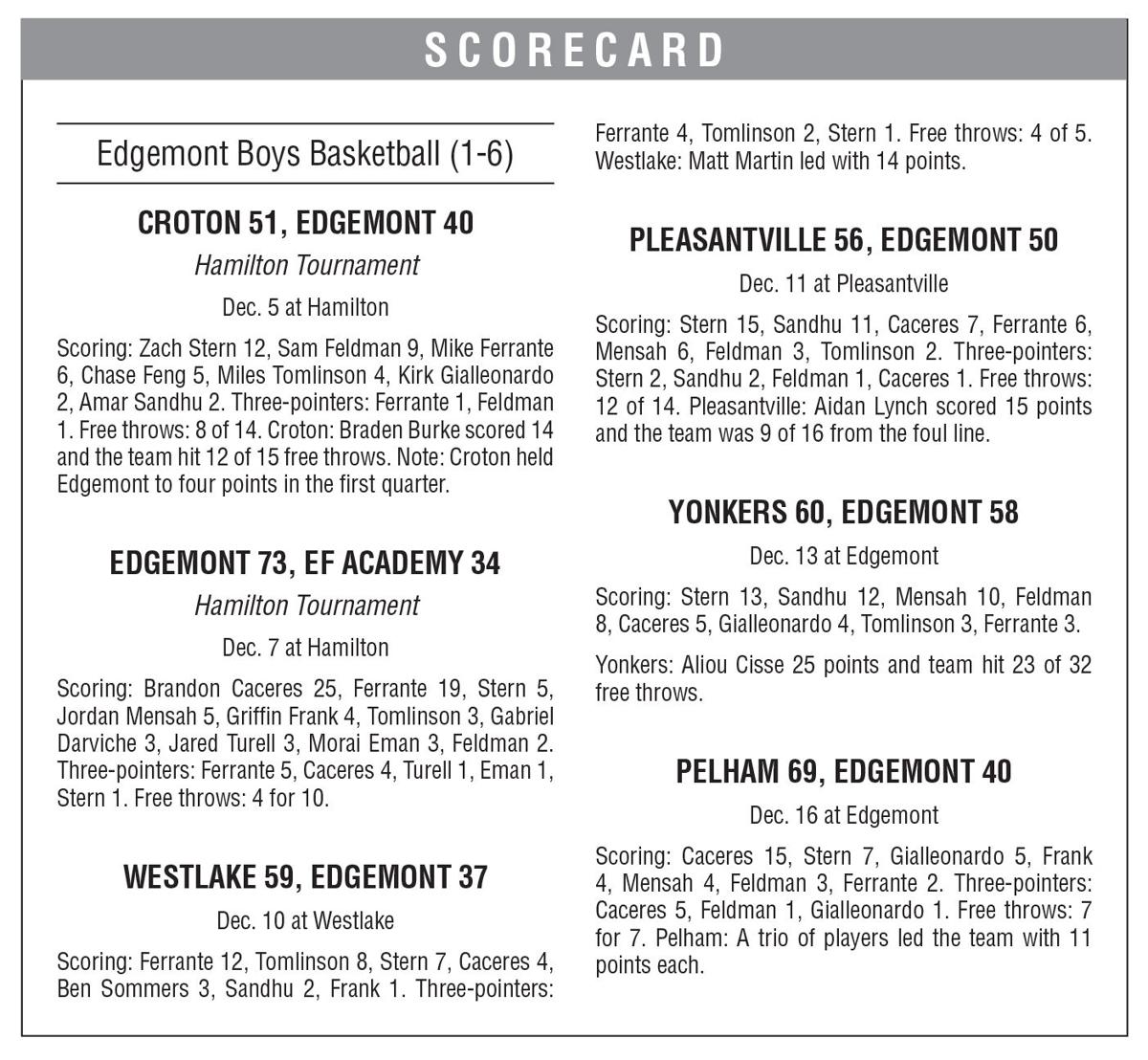 In back-to-back games, sophomore Mike Ferrante scored 19 and 12 points against EF Academy and Westlake, respectively. He’s been below 10 points in Edgemont’s five other games, with the lone game he didn’t put the ball in the basket being his first varsity game on opening day.

“I think my strength is shooting — obviously it didn’t go in today — but I think I need to work on my defense and hustle more,” Ferrante said following a 60-58 loss to Yonkers on Dec. 13. “But I think my shot is definitely the best part of my game.”

Ferrante is Edgemont’s lone underclassman. Coach Craig Moses had Ferrante on his radar from summer ball, but needed to see something more in tryouts before he took him up from junior varsity.

“Coming into tryouts this year we were thinking maybe, maybe not,” Moses said, adding, “I’ll be the first to admit he’s been a pleasant surprise.”

With point guard Chase Feng tearing his ACL 30 seconds into the Dec. 7 blowout win over EF Academy, Ferrante has largely been stepping up in that role. He not only handles the ball and can put it in the basket.

“Right now I’m over the moon with Mike,” Moses said. “He is not only an incredibly coachable kid, he’s like a sponge. He just learns and learns and learns. He’s made a very dramatic improvement from one year to the next. He’s a really confident shooter. He makes very good decisions. I think even with his friends he’s an underrated passer. He is going to be one heck of a player… There’s some learning curve for him, but he has a really bright future.”

Ferrante is still a work in progress, but he’s growing up quickly on the court. “I think I’m learning from seniors like Miles [Tomlinson], Amar [Sandhu] and Zach [Stern],” he said. “They’re teaching me a lot and I’m contributing to the team as much as I can.”

Edgemont is 1-6 this season, but lost 56-50 and 60-58 to Yonkers in back-to-back games. The Yonkers game was particularly telling for Moses, who watched his team stand its ground toward the end of the third period as it looked like Yonkers was about to pull away.

“Coach called a timeout and told us the game was slipping,” Ferrante said. “The crowd got into it, our bench got into it and we just played harder as a team.”

Amar Sandhu hit a three-pointer and had a putback and then picked off the final pass of the quarter that he nearly put in from halfcourt. It was 47-41 heading into the fourth.

“It was nice to see them put it together a little bit,” Moses said. “I think that gave them a big confidence boost, which we desperately needed. A couple of guys came up with some really big plays and we finally got a charge, which helps swing the momentum.”

“They played with heart, they were resilient, they fought their way back,” Moses said. “They’re never going to quit on the game. They’re always going to play hard no matter what the scoreboard says. That’s something as a coach that I’m very proud of.”

The second game of the season, a 51-40 loss to Croton at the Hamilton Tournament on Dec. 5, was a focal point for Edgemont.

“It was the first time I ever felt like we left something out of the court, that maybe we could have given just a little bit more,” Moses said. “After that since then against Pleasantville, which was a tough game back and forth, and then again against Yonkers I really think the thing that is undeniable about this team now is their heart. They will absolutely fight to the end. I love that about this team. They addressed that issue after that Croton game and they’ll never give up.”

A third of the way through the season, the Panthers are looking to shake off a rocky start and head into league play with new resolve to start racking up some victories.

“Ultimately we’ve talked a lot this season about poise and being able in those crucial moments to do things like take care of the basketball, execute minute details a little better,” Moses said. “The tools are there and as soon as they put that extra attention to detail — running shoulder to shoulder tight off screens, boxing out every play, getting on the floor for every loose ball, not letting one slip by — those little things when they finally put it together will definitely work out in our favor.”

Moses would also like to see some more consistency in scoring and limit turnovers.

“If I had to pick one area that’s pretty staggering to me right now we need to improve our ball control,” Moses said. “We turn the ball over way too much and it’s kinda silly, unforced errors sometimes where we’ll actually create a turnover ourselves and give the ball right back. Basketball is a game of runs and it completely takes the momentum away from us every time we do something well defensively. That’s the area I’d like to focus on most as we move forward.”

In addition to playing a strong game against Yonkers, it was also the Suits and Sneakers fundraiser for Coaches vs. Cancer.

“That’s something that's close to my heart this year,” Moses said. “I lost my grandfather last June to cancer. It’s been really hard on my family, but he was an amazing role model for me and I’m happy to raise some money tonight and be able to give a donation that hopefully will fight what is just a terrible, insidious disease.”

It was an off-court lesson for the Panthers.

“We’ve talked about how, especially here at Edgemont, we’re all very lucky to have the opportunity to be not only in a great community, but to play basketball,” Moses said. “Not everyone gets that opportunity and I want them to feel how lucky they are and to cherish it. I’ve told them before that I love basketball more than anything, but it’s bigger than the game sometimes. There’s always things that are going to be more important. I hope that helps put things in perspective for them and continues to as we move forward.”