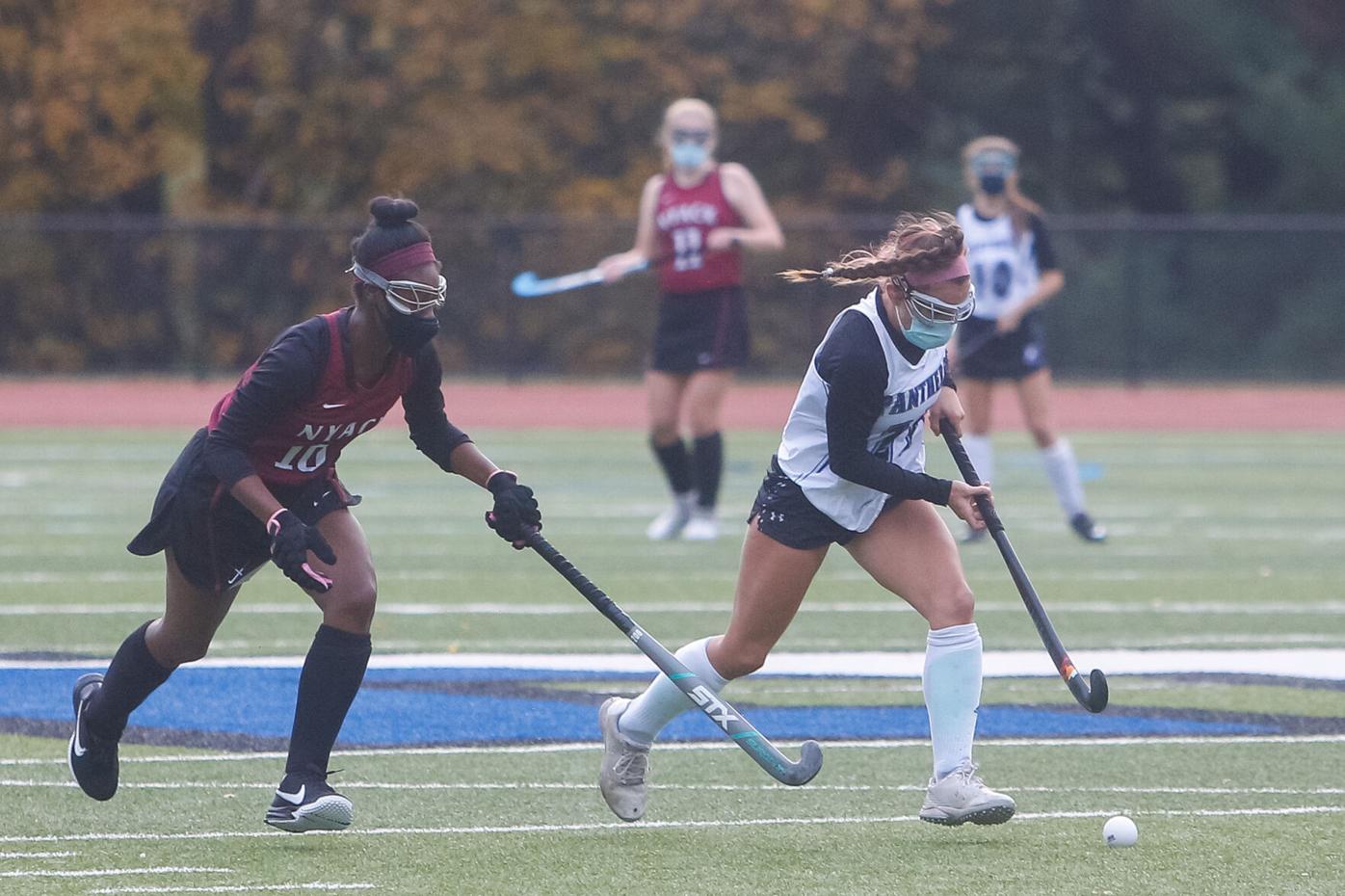 Zaza Aslanian had a hat trick in a 3-2 win over Nyack. 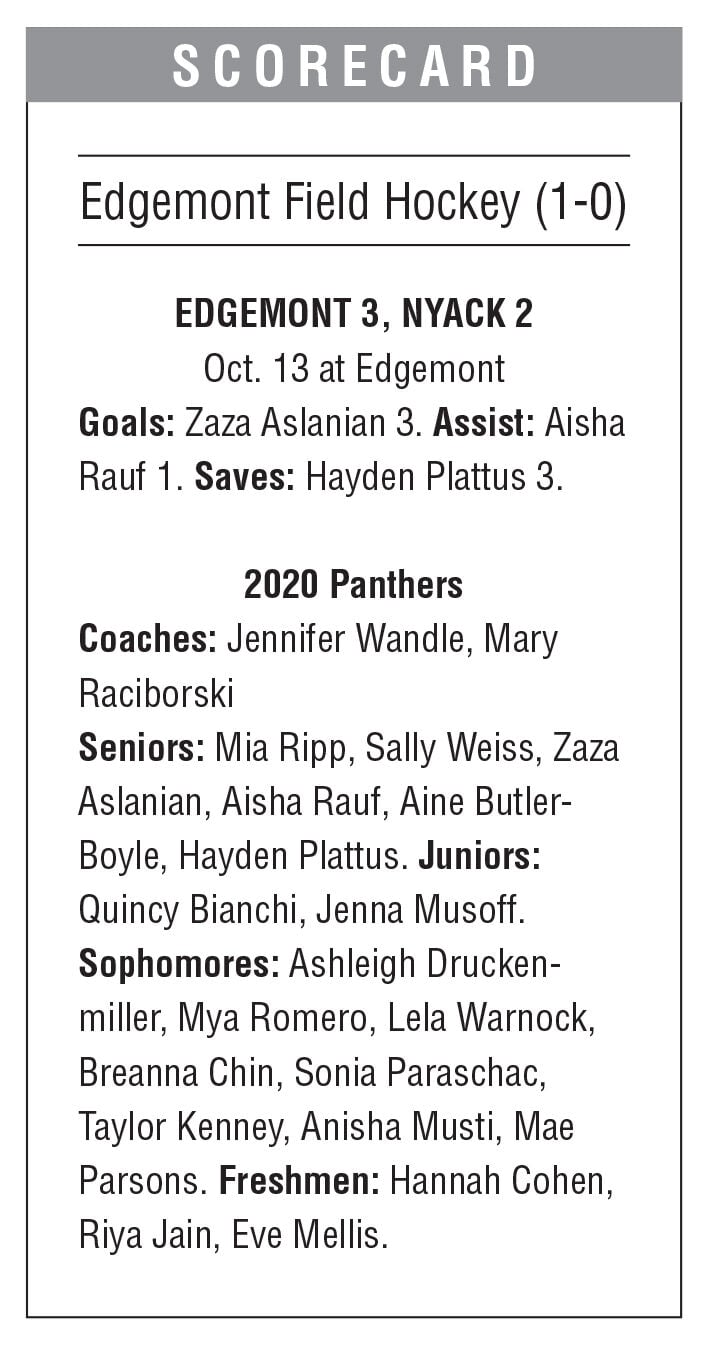 Zaza Aslanian knows to treat every game like it could be the last one of the season. Playing with her typical hard-nosed intensity, Aslanian led the Edgemont field hockey team to a 3-2 opening day/senior night victory Tuesday, Oct. 13.

With the second hat trick of her career — her first game sophomore year in a homecoming loss — Aslanian made her presence known early and often against visiting Nyack at Blanford Field.

Assisted by fellow senior Aisha Rauf, Aslanian got the Panthers on the board just under six minutes into the first quarter. (The sport moved from 30-minutes halves to 15-minute quarters this fall.) On a penalty stroke in the second quarter, Aslanian made it a 2-0 game.

Edgemont had a defensive lapse with 20 seconds left in the half. Nyack made a strong pass with senior goalie Hayden Plattus coming out of the cage and it was a tight 2-1 game going into the senior night festivities.

At halftime, Edgemont celebrated the six seniors who are the core of the team. Aslanian, Aine Butler-Boyle, Mia Ripp and Plattus are all four-year starters, while Sally Weiss is a three-year starter and Rauf is a first-year starter in her second year on the team.

“My seniors played incredible today,” first-year coach Jennifer Wandle said. “I am so proud of them. They have been such great role models for their younger teammates and I know they have been looking up to those girls. They have them as their models and know to follow them on the field.”

Just 3:23 into the third quarter, Aslanian scored again following a terrific save by the Nyack goalie for an insurance goal and a 3-1 lead.

“It was awesome getting that first goal in,” Aslanian said. “We were all in. Then at halftime having a second my dad was all like, ‘You got this; thank you so much for this.’ I’m a very emotional person and I cried and I wanted to do it for my brothers who are here and my parents who give every single day to field hockey. I wanted to do this for them on senior night, something special.”

With just over four minutes left in the quarter, Nyack edged closer to pull within one. Both defenses held strong the final 19:16 of the game and 3-2 was the final score.

Aslanian’s performance really opened Wandle’s eyes, which were tear-filled watching her play. “She had an amazing game today,” Wandle said. “Her head was into it. She was 100 percent ready to go today. I think that kind of lifted the team. They saw she was on fire and they wanted to be up there with her. It was amazing to see.”

With only two juniors, a sophomore class of eight and three freshmen, the tone is being set for the future.

“I think all of our girls really stood out today,” Wandle said. “It was nice to see them in a game situation. We had some girls playing newer positions and girls that have never played field hockey before and they played incredible today. I have a lot of younger girls and some are very timid, but seeing them out there today you would never have guessed that’s the way they started out.”

Aslanian was impressed with freshman Eve Mellis in her varsity debut.

“Watching Eve Mellis, a freshman, contribute to this on the field was something amazing,” Aslanian said. “It was awesome to see each grade bring something different and if you can combine all those and work together it’s going to be an amazing season.”

Wandle and assistant Mary Raciborski focused on team building and connecting on the field in preseason and it paid off.

Going in, the Panthers, who were 3-10-1 last year, didn’t know what the season would hold for them.

“With COVID we didn’t know what to expect and we didn’t have that much time to practice, but I think it paid off,” Rauf said.

The 2-0 and 3-1 leads were key. “It was really exhilarating,” Rauf said. “You’re constantly looking at the clock and making sure everybody is where they’re supposed to be and just trying to make sure you’re working your hardest.”

The win was the biggest reward. “It feels great to win,” Weiss said. “We did a great job communicating. It’s all about communication and getting to know each other and trusting each other with the ball. All we want to do is keep winning. This is a great start to the season. We want to keep that going.”

For athletic director Anthony DeRosa, everything has been out of the ordinary, but he’s long said he’d do anything to get kids back to playing sports. Senior night on opening day was definitely out of the box.

“I thought it would be a little bit strange doing it for the first game of the year, but once we were doing it it didn’t seem strange,” DeRosa said. “It is the right thing to do, but we’re hoping doing everything right with all the precautions in place that we’ll have a full season. We’re not guaranteed it, so we want to make sure we honor our seniors after so many of our seniors last year didn’t get that opportunity.”