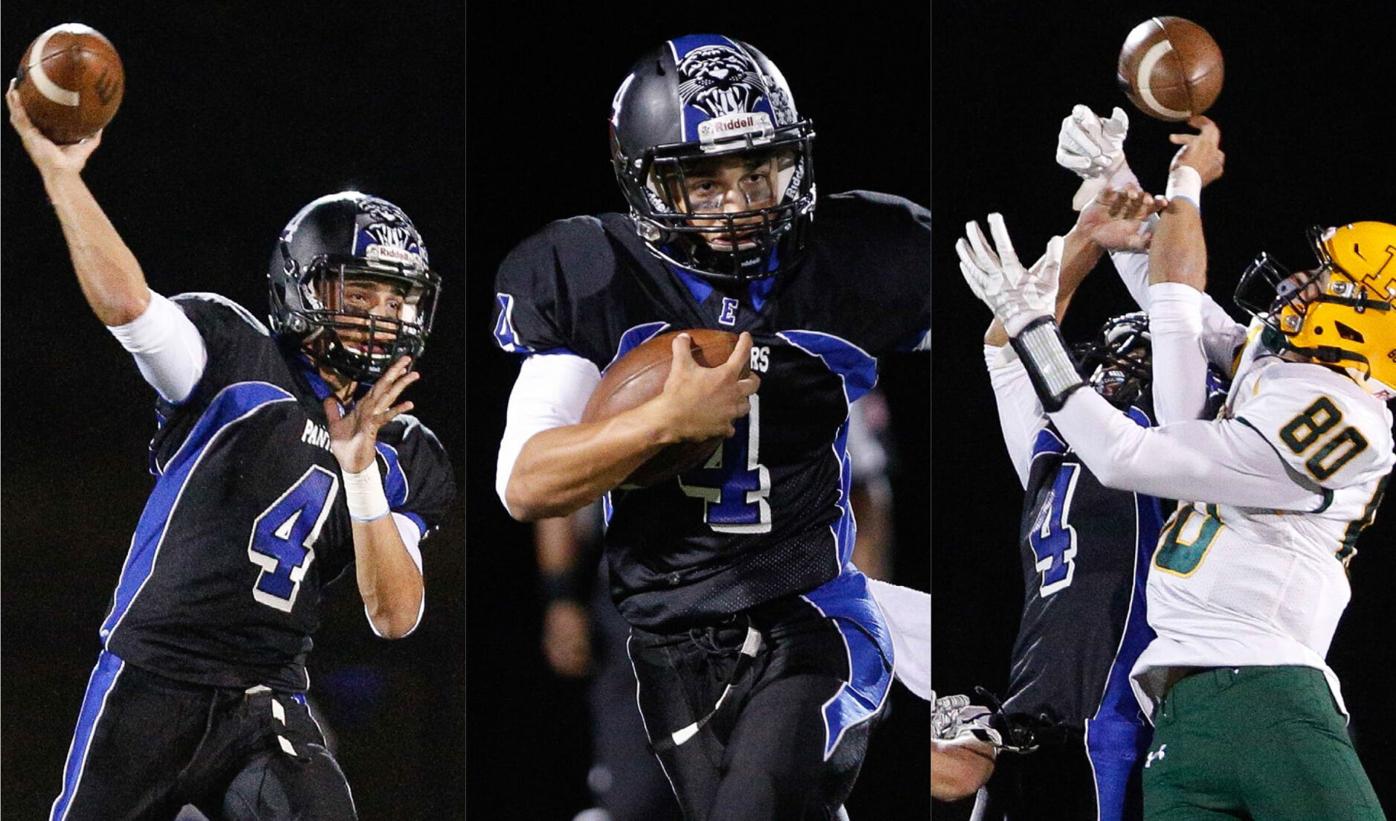 Edgemont senior Kirk Gialleonardo will bring his versatility to Lafayette football in the fall. 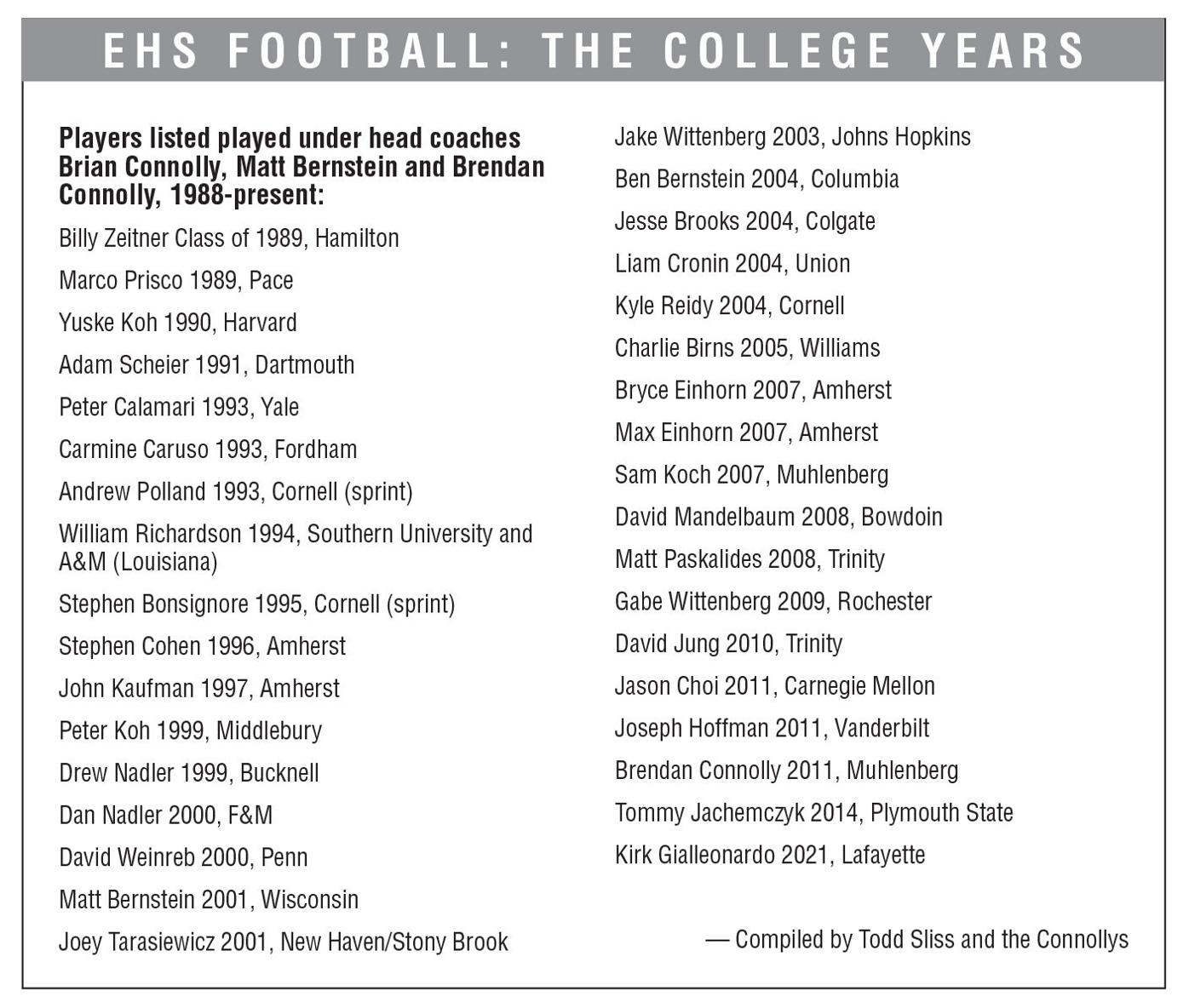 On the third play of the season, Edgemont senior Kirk Gialleonardo turned a surefire loss of yardage — a snap over his head — into a 30-yard gain after her recovered the football and did what he does best. Unfortunately for the playmaker, he broke his collarbone at the end of the play, closing the book on an already difficult COVID-19 senior season.

“That’s not a play most kids will make,” coach Brendan Connolly said. “You’re losing 5 or 10 yards on that and he turned it into a 30-yard gain.”

A week later, however, Gialleonardo got the pick-me-up he needed when Division IAA Lafayette coach John Garrett offered the 5-foot-9, 165-pounder a spot on the team next fall. Connolly pointed to gritty, heads-up plays like the snap recovery as a big reason Gialleonardo garnered attention from college coaches.

“I feel like it’s a perfect fit for me and I’m just really happy the recruiting process ended up working out very well for me,” Gialleonardo said.

Like most things over the past year, the recruiting process was rocky for Gialleonardo, who didn’t start contacting coaches until after his junior year, so he was already playing catch-up in sending out his highlight tape with help from Connolly. Gialleonardo was getting looks and offers from Division III schools, but he had his sights set at playing Division IAA.

“It was really tough to get in contact with a lot of DI schools because of the pandemic and they weren’t really recruiting New York kids because we didn’t have a fall season,” Gialleonardo said. “They wanted senior tape. They passed up on a lot of the kids from around here. I ended up getting preferred walk-on spots from Sacred Heart and Wagner like three months ago, but I didn’t feel like their schools suited me very well.”

Gialleonardo said he entered the process “with an open mind” and was planning to apply to schools strictly academically too until he got “a lot of interest for football.”

Gialleonardo’s top Division III choice was Union College, but when Lafayette called early this week, he committed right away. “I feel like it’s a totally different atmosphere DI vs. DIII,” he said. “I didn’t have a problem playing DIII — I really wanted to play football somewhere — but my top DIII choice was Union, a small liberal arts school like Lafayette. I feel like that school really fit me well and I would rather play AA than DIII. The coaches have been great to me throughout the process. I’ve been talking to Lafayette since the beginning.”

Gialleonardo joins a long list of Edgemont players to play at the next level — including many IAA players, mostly Ivy League — though over the last decade it’s been a very small number, which includes his current coach, a 2011 Edgemont grad who during his own junior year had to step up to play quarterback at Edgemont when classmate Joseph Hoffman got hurt. Connolly went on to play at Muhlenberg, while Hoffman was a walk-on at Vanderbilt.

Connolly knows that Gialleonardo is a throwback to players from the 1990s and 2000s who came before him, a multisport athlete who was a building block for the small school program. “You don’t get there by accident,” Connolly said. “It’s good to see a kid who worked so hard to get that at the end.”

It didn’t occur to the then-undersized Gialleonardo as an underclassman that he could play at the next level. Freshman year he didn’t play much and sophomore year he was mostly on defense as a free safety, getting a few snaps behind and some handoffs from then-QB Anthony Langiulli when the team moved to the triple option. Gialleonardo had a breakout season as a junior and his hard work in the weight room, speed clinics and offseason were paying off.

“I just kept getting bigger as the years went on and coaches Brendan and Brian Connolly have really been there for me the whole time,” Gialleonardo said. “As much as we’re a small program I’ve been lifting hard all four years, been working hard all through the summer.”

Ending his senior season without a highlight reel was tough for Gialleonardo after a year of anticipation for the coming season, which was delayed by the pandemic. Edgemont was once again in the independent league, a two-time finalist and defending champion from 2019 looking to dominate after not being hit hard by graduation. Senior season was supposed to be the pinnacle of Gialleonardo’s career after joining the 1,000-yard rushing club and passing for over 900 yards, too, as a junior.

“This is what I had been looking forward to my whole time here at Edgemont,” Gialleonardo said. “It was really tough for me, but I have been on the other players to step up. I think they really will. We had a really tough day that Saturday. It was a crazy game and I’ve never seen anything like that happen before. I’m really looking to do my PT and I’m going to try to be back better than ever.”

Connolly noted that college coaches “get paid to win,” so they were taking players they could see succeed now. That Gialleonardo didn’t give up and had the goods from his 2019 highlight tape is a testament to him as a person and a player.

“He’s a quick, twitchy kid, a great athlete, obviously a great football player and a great leader, which you can see on the tape,” Connolly said. “He needed to stick with the process and luckily it worked out in the end for him.”

Between his defensive prowess, his hands and his speed/agility, Gialleonardo has what it takes to succeed. He also has the smarts.

“He’s a very instinctual player, knows where the hole is going to be before it’s there, so he makes the cut early and does a great job setting up his blocks,” Connolly said. “When you have a kid who is a great athlete and a great football player like that you put him all over the field where you think the ball is going to be on defense to try to make the play and on defense you get him the ball as creatively as possible. He allows you a lot more freedom and creativity as a coach and also makes you a better coach because he can make plays off script that you can’t account for.”

Gialleonardo, who was a key member of Edgemont’s basketball team, showing the same type of grit and explosiveness on the hardwood as he did on the gridiron, knows he’s going to Lafayette as an “athlete” who will battle for any number of positions, including slot receiver, running back, cornerback and “they said possibly even” quarterback. He expects to redshirt, play special teams for a year and then begin competing for playing time as an upperclassman. Connolly said he’ll be a “hybrid” used wherever he belongs.

Gialleonardo said he’s mostly pain free just over a week after his injury and looking forward to a month of rehab and getting back to work in late May or early June. Connolly said “luckily” it’s a broken bone that will heal, not ligament damage, which typically worries coaches because that can lead to recurring issues. “The collarbone is a fairly common football injury, so it’s not a huge red flag,” Connolly said.

For Connolly, Gialleonardo’s achievement is a big deal for the program.

“I’m hoping it can show kids that you don’t have to be the biggest kid to be successful,” he said. “When Kirk came up as a freshman he was 5-foot-3, 110 pounds. He learned and came in and was able to play. Hopefully we can use that blueprint to tell kids, ‘I don’t care how big, fast or strong you are, if you put the work in and you’re willing to do whatever it takes, you have a future.’ Hopefully this can be a launching point for us.”