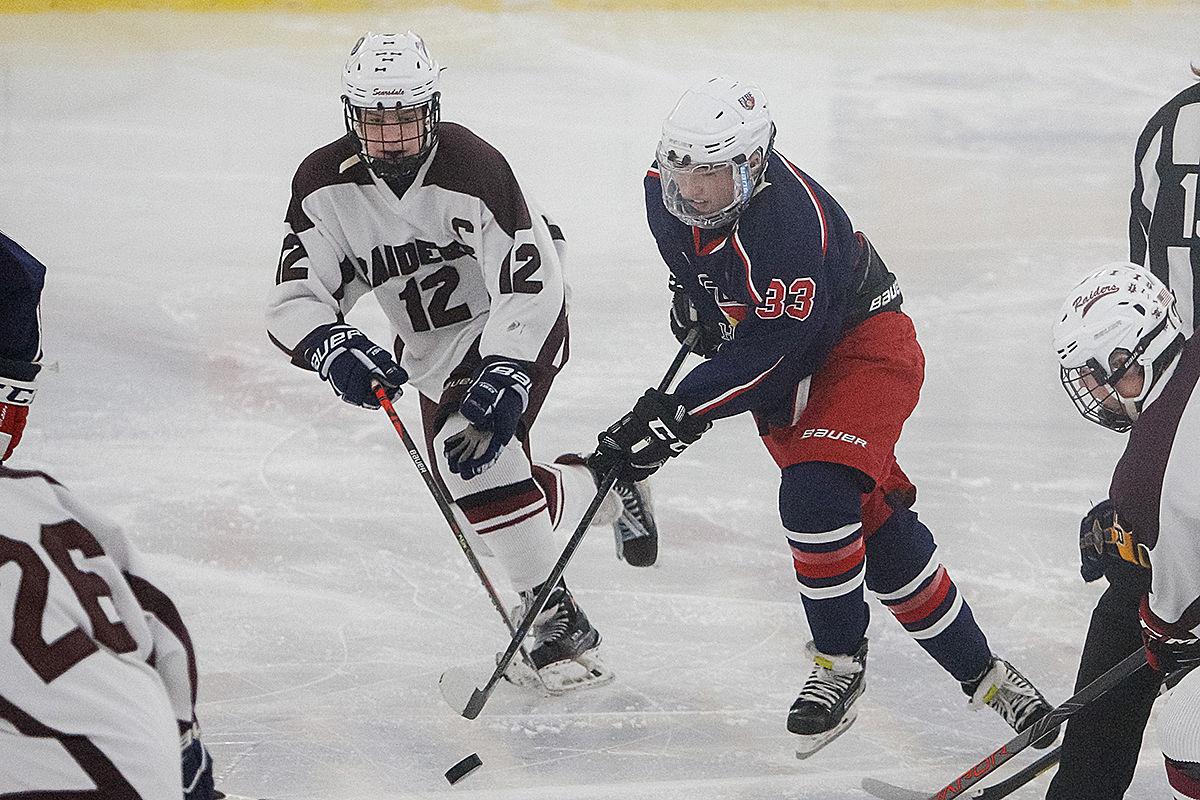 Anderson Ng of Edgemont and Josh Bock of Scarsdale battle for a loose puck.

The Scarsdale ice hockey team made a reservation for a trip to the Section 1 Division 1 semifinals. On Tuesday, Eastchester/Tuckahoe/Bronxville/Edgemont cancelled the reservation and made one of its own.

With a stunning, shocking, surprising 5-3 win — empty-netter with 38 seconds left — No. 11 ETBE turned the ice hockey world upside down against the No. 3 seed in the quarterfinals.

Scarsdale was the favorite based on regular season play — Scarsdale had a tougher schedule and a 10-9 record — but what wasn’t taken into account for ETBE’s lackluster record of 8-11 was that the team was rarely at full strength.

Little did Scarsdale expect to head into the locker room after 15 minutes in a scoreless deadlock with ETBE.

“It was stressful, very stressful,” Eastchester senior Matt Luna said. “The 0-0 first we were not expecting. We came into the game ready to play, ready for whatever Scarsdale was going to come at us with and we came prepared.”

Said Scarsdale senior Arthur Mortreux, “We gave them hope in the first period and that was all they needed. They outhustled us to loose pucks. They hit more. We weren’t there mentally.”

The first period was a morale victory for ETBE.

“We played a strong period, we played well,” ETBE coach Steve Forzaglia said. “We had some chances and we didn’t get a goal, which would have been nice, but it helped prove to them to see we were able to play with them. Mentally, yeah, we knew they were Scarsdale, we hear they’re good, but it gave us the edge to say, ‘We can skate with them.’”

Scarsdale, on the other hand, skated off the ice in disbelief. It was written all over their faces.

The Raiders reacted by scoring the first goal of the game 49 seconds into the second period as freshman Brian Nicholas put the puck in the net for a 1-0 lead.

“That surely got us fired up and we should have kept going, but we allowed them to get two goals in like 15 seconds and that really killed us,” Mortreux said. “We need to learn to bounce back better from big mistakes.”

Eagles senior Matt Luna did the impossible, scoring twice against goalie Max Kushnick, the first a wraparound prior to a whistle, within 15 seconds at 10:52 and 10:37 for a 2-1 ETBE lead.

“Honestly this could have been my last game, so I had to score,” Luna said. “And two goals was an absolute dream comet true.”

Luna’s performance inspired ETBE. “It got the whole bench pumped,” Edgemont junior Anderson Ng said. “He’s a senior, it’s his last year and he knew it could be his last game. To finish off and be clutch like that is unbelievable.”

Forzaglia knows what Luna is capable of and there was no better time to show it. “That’s your senior captain, what you want in big games, for him to step up and play big,” Forzaglia said. “Those two goals were huge.”

At that point Scarsdale, which platooned in goal much of the season, warmed up Ethan Fehrenbaker for two reasons: 1) To attempt to spark the defense and 2) to break ETBE’s momentum.

It didn’t quite go as planned as ETBE went up 3-1 2.5 minutes later as Bronxville freshman David O’Shaughnessy scored with 8:08 left in the second period.

Just under four minutes later, Scarsdale got a goal from its lone senior starter, Luke Schur, who put a shot past Eastchester junior J.P. Rosabella, a shot Rosabella never had a chance to see coming.

“He’s been practicing real well this past week and we mixed him up a little bit into the offense and he had a great few goals in practice on back-to-back days, so we gave him some shifts at forward and he did exactly what we were hoping he was going to do,” Scarsdale coach James Synowiez said.

With the game at 3-2 with 4:16 left in the second, both teams knew the next goal could determine the outcome of the game, and it did as Eastchester junior Luke Ferrara extended ETBE’s lead to 4-2 with 1:21 left in the period.

“Once it was 3-2 we knew we had to close it out because it was back in their reach,” Ng said. “Then we needed 15 more minutes of hard hockey, which is what we were talking about between the second and third periods and we got it done.”

Scarsdale had a penalty in each of the first two periods, ETBE none, but the three penalties in the third period had a major impact on the game. ETBE got in the box first with 10:20 left, and second just nine seconds later. Just as the first penalty was releasing, Nicholas scored for the second time, which also released the second penalty. It was a 4-3 game and the teams were back even on the ice.

Scarsdale junior Charlie Berridge was hit with a four-minute major for a hit from behind with 5:21 left in the game, putting Scarsdale at a major disadvantage as they tried to tie the game short-handed.

With 38 seconds left, O’Shaughnessy’s empty-netter sealed the win and soon ETBE was able to celebrate the upset.

Three nights earlier, ETBE got its first program postseason win since 2013, the first since Edgemont joined for the 2014-15 season, by beating No. 6 Cortlandt, a team they had lost to 4-3 in the regular season.

“They played their hearts out,” Forzaglia said. “They played a great game on Saturday, a better game tonight.”

Going from Cortlandt to Scarsdale was a big jump in competition level, but ETBE was up for it in a spot where they had nothing to lose.

“It’s a different team, so I knew that we had to play our top game and show that we can play with top teams,” Forzaglia said. “Our record wasn’t great and we had other issues, but it shows we can skate. When we have a full team we have a damn good team. I think people are starting to realize that.”

It’s one thing to believe you can win, but to actually do it was a great feat. “This is huge,” Ng said. “To beat a team like this is just unbelievable to me. I thought it took heart, resilience and just grit. We straight out out-worked them. They’re a very talented team, but I think we’re the hardest working team in the section.”

Luna was always hopeful something like this would happen during his time with the program. This year it finally came together.

“Seeing all the talent we had coming up each year I just knew we were going to get better and better each year,” Luna said. “We finally got to that stage, we’re winning two playoff games… We’ve been waiting for a playoff run for years, so hopefully we can take this as far as this goes and see what happens.”

Unlike the player and fan reaction following a 7-3 win over Cortlandt in the first round, Scarsdale was gracious in defeat.

“I give their kids a tremendous amount of credit,” ETBE assistant coach Rob Striar said. “They played an incredible game, they played really hard and at the end of the game pure class. They wished us success, told us we were one of the toughest teams they played all year. That’s a top-notch team from a player and coach standpoint.”

The Raiders were left shaking their heads, but they put the loss on themselves and reflected on what had just happened.

“[ETBE] showed us hard work and effort,” Synowiez said. “They served us up a slice of humble pie and it was just clear from the beginning of the game through the third period. We got outworked to loose pucks on the boards. They had a game plan with their wingers high in their defensive zone and they were a little back in forechecking us and we just didn’t shoot the puck enough. We tried a few different things and some shifts we did them and some we didn’t. At the end of the day hard work beats talent and that’s the bottom line.”

Cutting the deficit to 3-2 and then going down 4-2 was Scarsdale’s season in a nutshell. The Raiders often had trouble in tight spots, which is where close games slipped away.

“So many times this season teams have capitalized on scoring the next goal after they scored on us in less than a minute and a half,” Synowiez said. “We talk about resiliency and face-off tactics on the draw at center ice and we didn’t execute unfortunately.”

For the fourth year, Scarsdale seniors Schur and Mortreux were unable to get to the semifinals. They wanted a third shot at Mamaroneck after losing 6-3 and 3-2 to the Tigers this winter.

“I think we came into this game thinking, ‘It’s ETBE. Four schools to field one hockey team, how good can they be?’ But it doesn’t really matter about talent when the talent’s not working hard,” Schur said. “They outworked us fully — all three periods, full 45 minutes. That’s really all she wrote.

“They beat us to loose pucks. They had one guy in the corner, we had two and they still beat us. It was just a lack of hustle and they capitalized on it. We didn’t come out with a foot on the gas and they did. They were ready to go.”

What is truly exciting for both teams is that they graduate a combined five players — Schur and Mortreux for Scarsdale, Luna, Paige Leven and Jake Box for ETBE — and had major contributions from freshmen — five for Scarsdale, two for ETBE — this season. The upside and potential rivalry going forward for two teams that rarely play each other is good for the sport and should they see each other again in the future this sectional game will be on the minds of both teams.

“The two biggest classes are the juniors and freshmen and that means a lot of seniors next year for the first time for us,” Synowiez said. “I just hope we’re able to get past that quarterfinal game by outworking the other team. All week we’ve been preaching seeding doesn’t matter, scores throughout the season don’t matter when it’s playoffs. You have 45 minutes to prove you are the better team. When you don’t, you’re not.”

Added Synowiez, “Brian [Nicholas] did as much as he could, but he couldn’t do it all.”

Both Scarsdale seniors talked about the “culture” the team is trying to create on and off the ice. The main issue all winter was playing a full 45 minutes with urgency on the ice.

“I just hope they now understand and they have that taste, that sour taste that I’ve had since freshman year,” Schur said, noting that clean, physical play is the key to the game, and adding, “I really hope the kids can take that away out of all the life lessons I’ve attempted to teach these kids. Just take it in stride, but leave everything on the ice. This flew by. Really.”

Schur and Mortreux expect big things from the Raiders going forward with the entirety of the 2019-20 season hopefully being a lesson well learned on and off the ice.

“I loved growing up with Luke and all the juniors for three years,” Mortreux said. “It’s a great experience. They’ve grown so much and I’ve grown as a person as well because of them. It’s a great family.”