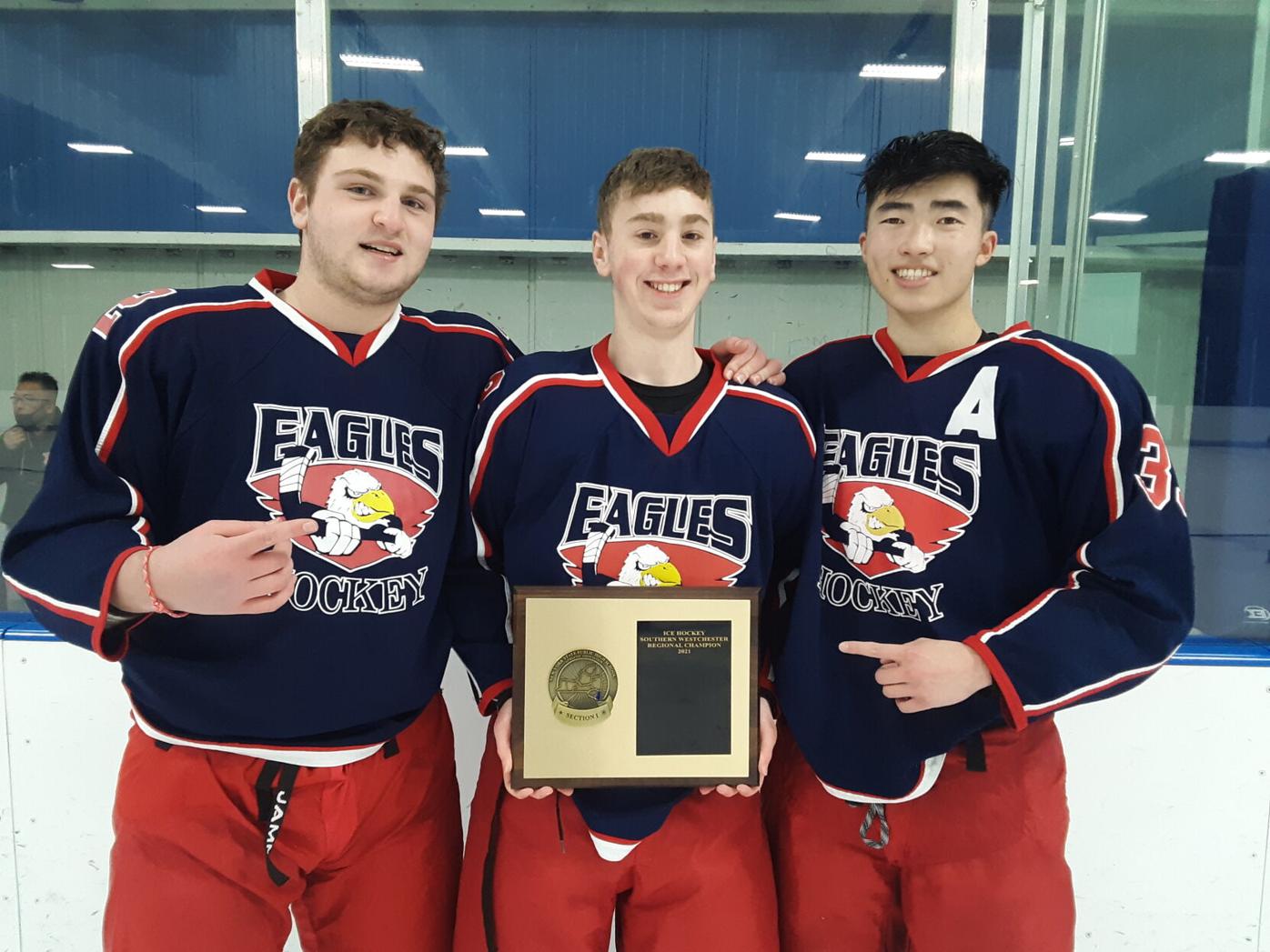 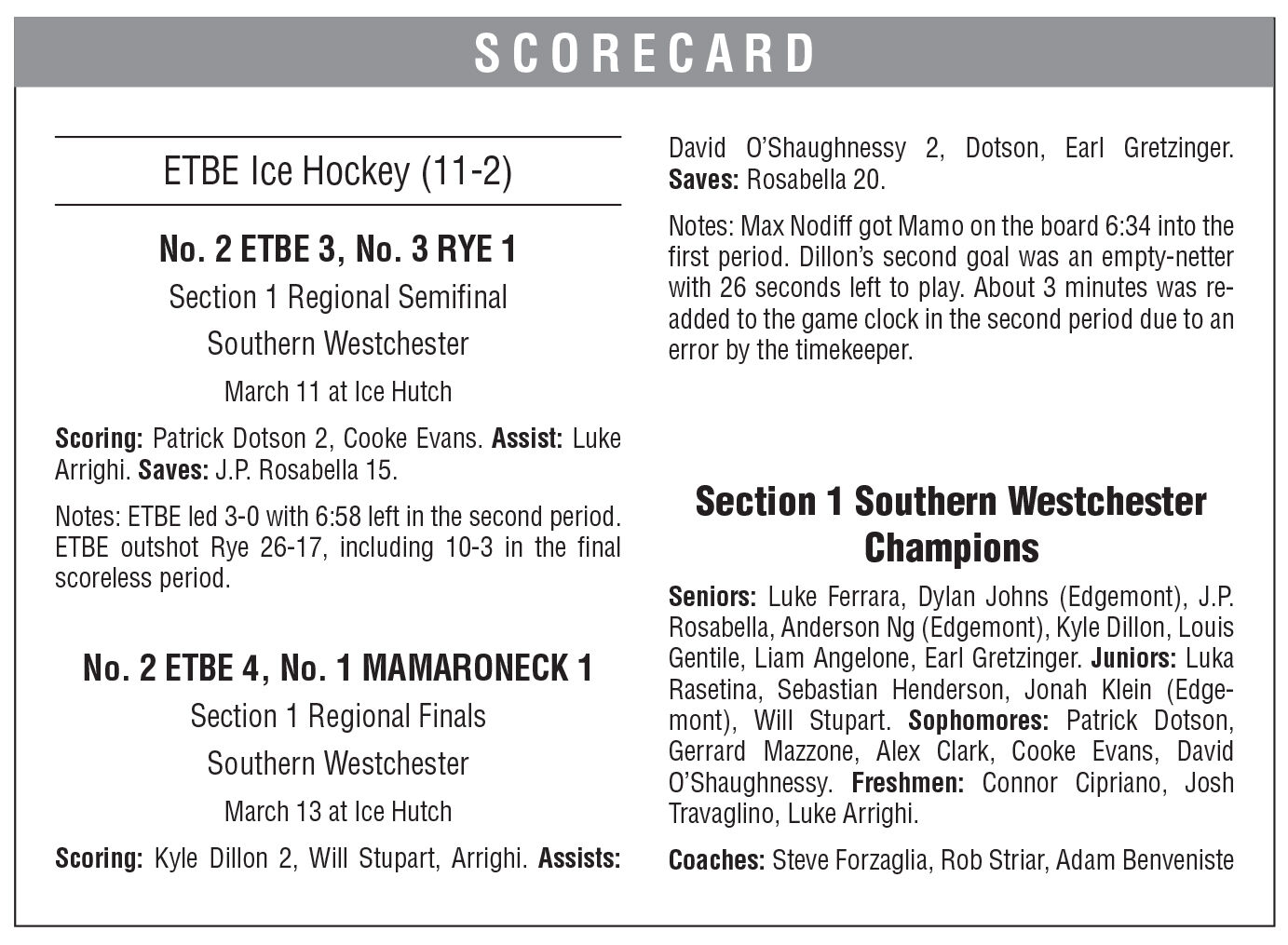 For the first time in its seven-year history, Eastchester/Tuckahoe/Bronxville/Edgemont had a winning record. This year that 11-2 record included three playoff wins, including the Section 1 Southern Westchester Regional Final.

“We’ve worked four years for this,” Edgemont senior Anderson Ng said. “Each year in playoffs we were getting farther and farther. Freshman year we didn’t even make it. Sophomore year we made round one and last year we lost in the finals. This year to win it all is something special. I never would have even dreamed of this. I still can’t believe it.”

In the late 1990s and into the 2000s, Edgemont was part of the Sledgemont (Sleepy Hollow/Edgemont) merger and in 2004-05 Valhalla was added to form Sledgehalla. Edgemont exited from the sport following the 2005-06 season, but came back to join the existing ETB program, adding the second E on the end for the 2014-15 season. After a pair of three-win seasons, ETBE was 8-8-3 in 2016-17 and made sectionals, falling 4-3 in overtime to Mount Pleasant.

When this year’s eight seniors were freshmen, the team was 5-13-1 and didn’t make playoffs. The next year they were 7-12-1 and lost 9-1 to Rye Town/Harrison in their first taste of sectionals. Despite an 8-11 overall regular season last winter, and an 11th seed, ETBE’s entire roster showed up for playoffs and the team beat Cortlandt 7-3, Scarsdale 5-3 and Mamaroneck 2-0 before falling 5-1 to Suffern in the finals.

The key, the team saw, was attendance, which had been a problem every year. This year the team was only largely short-handed once in the regular season as they were missing 3 of 4 defensemen in a 4-2 loss to Mamaroneck. Given that fact, they were confident heading into the rematch.

Against New Rochelle, the coaches got to use everyone on the roster in the third period, but for the Rye and Mamaroneck semifinals and finals, they went with goalie J.P. Rosabella and 10 skaters: the defensive duos of Sebastian Henderson/Patrick Dotson and Earl Gretzinger/Cooke Evans and the lines of Luke Ferrara, David O’Shaughnessy and Kyle Dillon, and Ng, Will Stupart and Luke Arrighi.

“They never quit, they never stopped,” coach Steve Forzaglia said. “We had complete faith in them. We just kept the rotations quick and short and they played our system and the last two games we got that lead on them and then just shut them completely down. Rye, we gave up three shots in the entire third period. Tonight they had nine and five of them were right at the very end when they were done.”

“It’s exhausting,” Ng said. “I think we all enjoy it, but sometimes we could just use a break.”

Against Rye, ETBE went up 3-0, with Dotson scoring two goals, with 6:58 left in the second period and held Rye to only three shots in the third period.

Max Nodiff got Mamo on the board 6:34 into the first period, three seconds of game time after Rosabella had gone down in the net after being hit and play stopped for several minutes.

Dillon tied the game 54 seconds into the second period and Stupart put the team ahead on a deflection off an O’Shaughnessy shot. Arrighi made it 3-1 and Dillon scored on an empty net with 26.5 seconds left in the final period.

Forzaglia has been coaching the team since the ETB days and has long coached with assistant Rob Striar. “They’re a major factor of the program.” Ng said. “They hype us up in between periods and get us going. They’re a big part of this win tonight.”

There were two levels of disappointment for ETBE in that 1) the team didn’t get to have a full bracket to try to win and 2) there was no state tournament to advance to in their best shot at making it far.

“We don’t have the history of a program like some teams,” Forzaglia said. “When you have that team that’s good and together and working and you see it you definitely want to go on. Listen, we got a trophy out of it, we got a plaque, we’re the last man standing in Section 1 for our bracket, so I’m good with that, too.”

“It’s a great group of seniors that have really worked with the younger kids to get them going,” Forzaglia said. “Now the younger kids see what it takes to get to that level. Now you hope that continues to build without them. That’s the hope.”

While the team will miss the seniors — notably longtime goalie Rosabella, who fueled last year’s playoff run with All-Section play — key players like Henderson, Stupart, Dotson, Evans, O’Shaughnessy and Arrighi will be the core to build around next winter.

“You always have guys going out and you always have guys coming in,” Forzaglia said. “You hope the guys coming in pick it up and we keep running with it. They saw what it took last year to go to the finals and they saw what it took this year to win, so we want to keep building on it. We’ve got a couple of good pieces coming back. We’ll run with next year next year, but right now we’re enjoying tonight.”

“The future is bright,” Ng said. “A lot of the young players are a big part of this team and I think they’ll make a serious run next year.”

Having four schools come together is a challenge, but part of what makes ETBE special.

“That’s what makes our program unique,” Ng said. “Some of these other teams, they’re all from the same school, but here we have to learn and adapt and get to know one another. That’s definitely another hurdle to gelling together, but with this group we made it happen.”