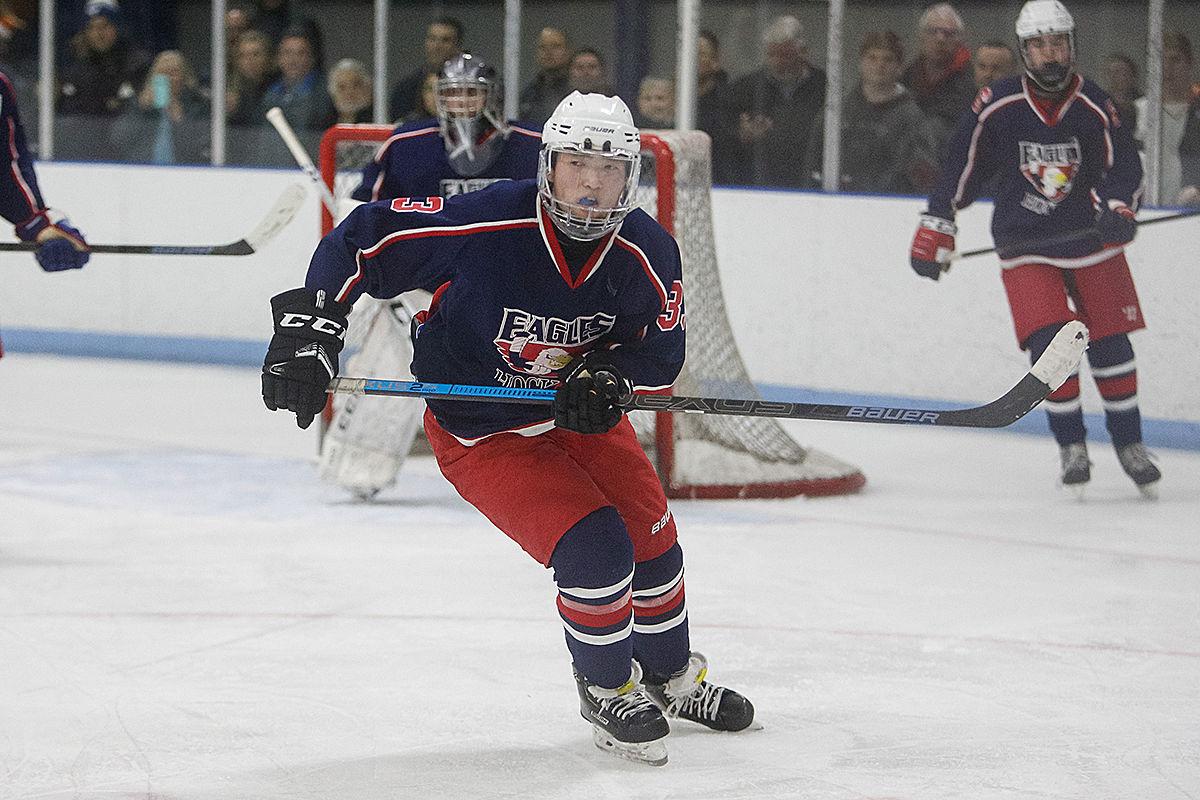 Anderson Ng pictured in the semifinals. 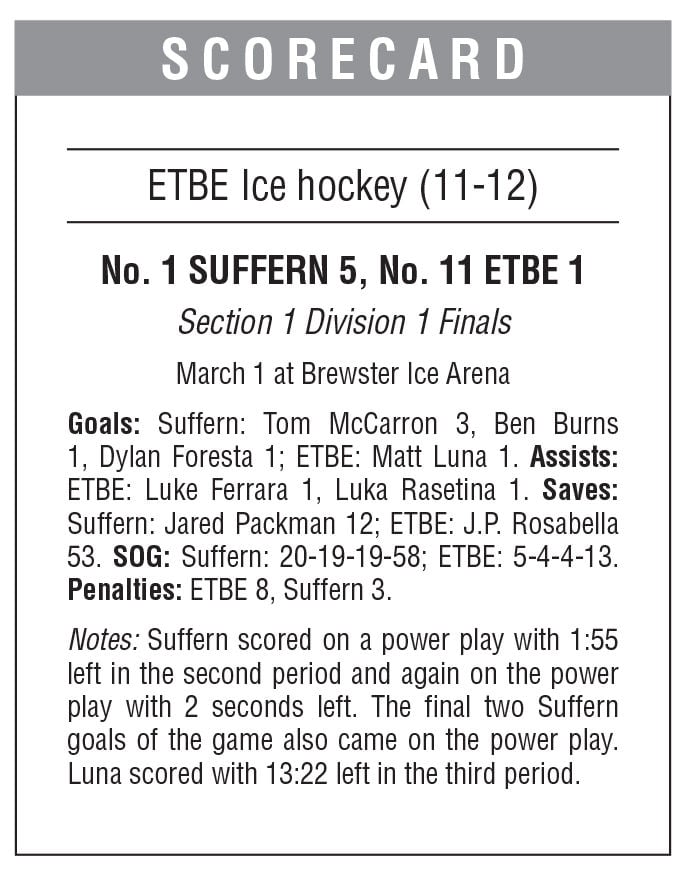 “The puck stops here” was Eastchester/Tuckahoe/Bronxville/Edgemont goalie J.P. Rosabella’s modus operandi during the first three games and nearly two periods of the finals of sectionals. He’d allowed six goals in the first three wins, but in the finals it wasn’t that he couldn’t stop the puck against No. 1 Suffern — it’s more that he saved 53 shots and allowed five to get in, while his team took only 13 shots and put one in.

No. 11 ETBE’s miraculous run, which included wins over No. 6 Cortlandt (7-3), No. 3 Scarsdale (5-3) and No. 2 Mamaroneck (1-0), put the Eagles in the finals against the top-ranked team in the state and Suffern displayed its depth by finally wearing ETBE down late in the game.

“It was 0-0 for 28 minutes,” coach Steve Forzaglia said. “I told them when they got out there to enjoy every moment. Eastchester had a giant fan bus. We had a packed house. There were a lot of kids. It was loud and fun and it was a great atmosphere.”

The first goal came with 1:55 left in the second period on a power play. Then with two seconds left in the period another man-up goal gave Suffern a 2-0 lead. It became 3-0 just 20 seconds into the third period.

“That one hurt,” Forzaglia said of the second goal. “If we can get through that, we’re only down 1-0 going into the third period. That kind of demoralized us a little bit and I didn’t agree, didn’t think it was a penalty.”

There were more penalties called in the Suffern game than the Scarsdale and Mamaroneck games combined. In the finals it was an 8-3 edge in favor of the top seed.

“They were calling a much tighter game than the last two,” Forzaglia said. “Not that the Scarsdale and Mamaroneck games were letting things go. They were just different games and there was no need for penalties.”

Eastchester senior Matt Luna got ETBE on the board just over a minute after Suffern’s third goal, but in the final 3:30 of the game, Suffern added two more power play goals in the 5-1 win.

Despite the loss, Rosabella put together an otherworldly postseason.

“He was out of control,” Forzaglia said of the finals. “He made some fantastic saves, made all the saves he had to make. Our defense did a good job for the most part of clearing in front or covering and blocking other shots that got through. J.P. just made a ton of saves that first period.”

“In the first period we kept it scoreless,” Edgemont junior Anderson Ng said. “The second period they had one and then with two seconds left it was tough. We definitely kept it close in the beginning. We kept fighting to the end. We were right there, so close. J.P. kept us in it. I want to give a lot of credit to him. I don’t even know how he did it.”

Rosabella made more than a save a minute in the finals, which is an incredible amount of pressure to withstand.

“Wow, when you put it like that it’s mind-boggling,” Ng said.

“They just have four lines of skill, talent and speed,” Ng said. “They come at you so hard. They have such good team chemistry. They were moving the puck really well. We struggled to even get the puck. They had good communication and they were an overall force.

“I think we can learn a lot from that team, how they play, how they work together.”

In the first three rounds, ETBE showed no fear against their opponents. It was the same in the finals as they were used to playing against teams they were expected to bow down to.

“You try to talk about it before the game,” Forzaglia said. “You’re here because you beat six, three and two. We’re not a 16 seed in the first round playing the one because you have to. They’re playing them because they earned it. We didn’t want them to worry about who it is or what’s on their jersey. We wanted them to just go out there and play the way they did to beat six, three and two. That was the message we were sending.”

Just playing in a game of that magnitude and being in that atmosphere was worth it for Ng. The crowd, which grew with each upset, had a big impact on ETBE for the playoff run.

“That was an unreal experience,” he said. “I’ve never seen a crowd so big. So many fans. That’s the most people I’ve seen from my school to show up for a hockey game. Since we’re a combine team we got so many fans from the four schools and to see them unify into one is amazing.”

It was also a great learning opportunity. “I learned so much and I think my teammates learned a lot, too,” Ng said. “Not only did we show that we can compete with top teams, we also showed the heart we have. For next year for sure I’m looking forward to a big run.”

ETBE’s 8-11 regular season record was in part due to a four-game suspension Luna received as a result of a penalty his coaches did not agree with and being short-handed due to other commitments, both hockey and otherwise, all season long. At full strength, the Eagles finally showed what they are capable of at full strength after either not making the playoffs or losing in the first round the previous five years since Edgemont joined the merger.

“They played hard, they showed guts, they showed heart and they didn’t quit,” Forzaglia said. “Me and [assistant] Rob [Striar] are both extremely proud of them and how they played this year. We’re still in shock about the run we just made. Never in a million years did I see that coming.”

The lone graduating ETBE starter is Luna, who had some key goals throughout the season.

“Matt is an integral part of the team, he’s the captain and he’s a great locker room presence,” Ng said. “He always pumps us up before, during and after the games. He’s a great motivator. It’s going to be tough, but I think coming into next year I think everyone is going to have to step up and fill that role that we’ll be missing.”