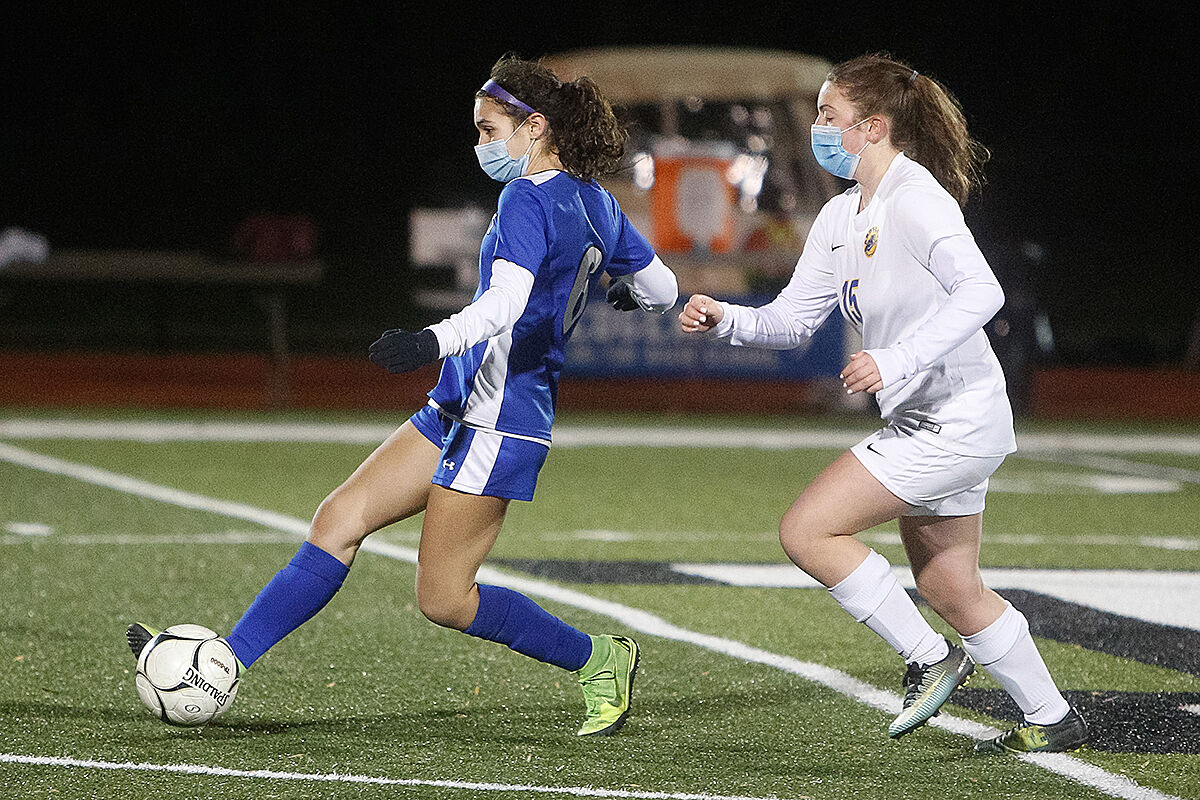 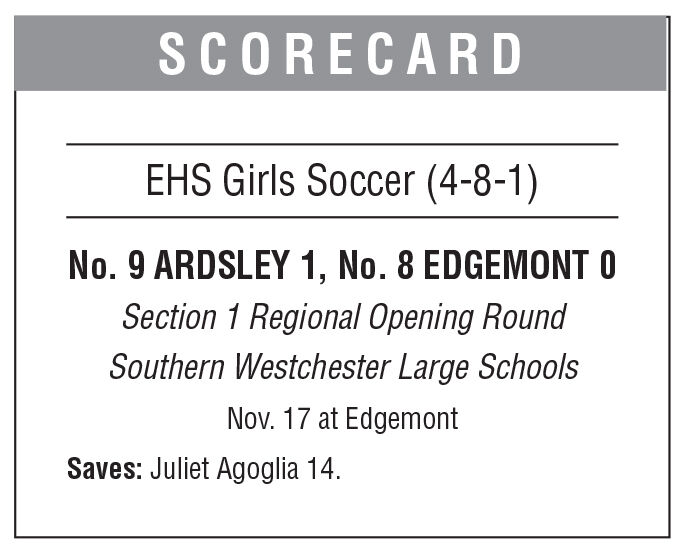 Coming into the Section 1 regional game having already tied and defeated Ardsley during the regular season, the Edgemont girls soccer team was hoping to win the season series and advance to the quarterfinals.

No. 9 Ardsley netted the lone goal of the game over the No. 8 seeded home team. Despite outscoring Ardsley 5-3 this season, Edgemont ended its season in disappointing fashion with a 1-0 loss.

“We dominated the play,” Edgemont coach Eric Brand said. “We had several scoring opportunities and we just couldn’t put it in. They put one in and that was it.”

“Juliet played really well for us,” Brand said. “Even the goal was a rebound. She tipped it, it hit the post, came back onto the field, we tipped it, they tipped it and it went in. It was a scramble and it could have gone either way.”

Brand believes his team was capable of advancing, but needs to learn how to win as a program. That’s going to be the next step next year with a large roster of returning starters.

“Edgemont girls soccer has not always been very successful,” Brand said. “I have to sometimes convince them that they deserve to be. They work hard, but some of them feel like when they lost it’s just another game, which is a good attitude, but because of quarantine we only had one senior on the field yesterday. Daphne [Ballas] was just beside herself when the game was over because her career ended.”

Still, senior Daphne Ballas walked off the field proud of her team’s effort.

“In the playoff game, even though we lost, I think we showcased ourselves well and played hard all the way through, and in the end we just got unlucky,” she said.

The first two times Edgemont and Ardsley played the scores were 2-2 and 3-1.

“Going into the Ardsley game we knew it would be difficult to win,” junior Alexandra Kahn said. “We had tied and won in the past, though in both games we really had to work our hardest to succeed. We tried to have the mindset to be the hardest working team on the field, which we did for most of the game, but we had our moments that ended up hurting us in the end. Overall it was a really competitive game from both sides.”

Due to the pandemic, the playoff system was altered this year and there were AA and A teams playing in the same bracket. The winner was playing for the chance to take on No. 1 Scarsdale, an undefeated AA power. “That would have been rough for us, but I would have taken it,” Brand said.

Senior Zoe Vickery’s final game ended up being against Peekskill in the 10th game of the season. She scored a pair of goals, but also got taken off the field due to an injury. Little did she know she wouldn’t have a chance to play again. The team was also without sophomore Brielle Suissa, the first off the bench, for postseason.

Ballas was the team’s leading goal scorer and Vickery was the team’s assists leader, so that’s a dynamic starting duo the Panthers will be losing, along with fellow senior Aaliyah Sayas.

“Though I have not been playing with the seniors as long as my teammates I can truly say that they made the few years I did play with them the most memorable,” Kahn said. “Both Zoe and Daphne always worked so hard on the field and really united the team on and off the field. I am going to miss them so much next year.”

Seven juniors will return, as will 10 eighth through 10th graders. Eighth graders Isadora Mello and Eliza Press, who filled in for Vickery against Ardsley, played a substantial amount of time.

Edgemont was 4-8-1 in its first year in Class A and just about every game was competitive down to the playoff game, which wasn’t always the case in past years, certainly not last spring.

“Overall this season, the team exceeded my expectations,” Ballas said. “Even though we moved up a class, we worked really hard and gave it our all and I was really proud. I think this was a good experience for the younger players because they got to get a taste of playing varsity soccer, which is probably more competitive than they thought. I think they can take their experience from this year and learn from it for the future. There is a lot of potential on the team and I’m excited to see how they do in the coming seasons.”

Kahn added, “Playing with this mindset and wanting to make the most of our short season, the team worked well together and played great soccer.”

Brand was thrilled with the season for many reasons, including competing hard every day, getting the most out of the young players, getting through an entire regular season while many teams did not, making a good showing in playoffs and enjoying working with every player on his roster.

“They did everything I asked of them,” he said. “They’re a really good group. I never had to try to motivate them; I rarely ever raised my voice. They tried really hard to do everything we asked of them. Even my wife said to me, ‘You seem like you’re having a really good time coaching this group.’

“During these times of struggle you find out what you’re truly grateful for and what you enjoy. The school I’m at, we don’t have kids yet. For me every day to go be with kids and try to fulfill my calling is something I was really grateful for.”