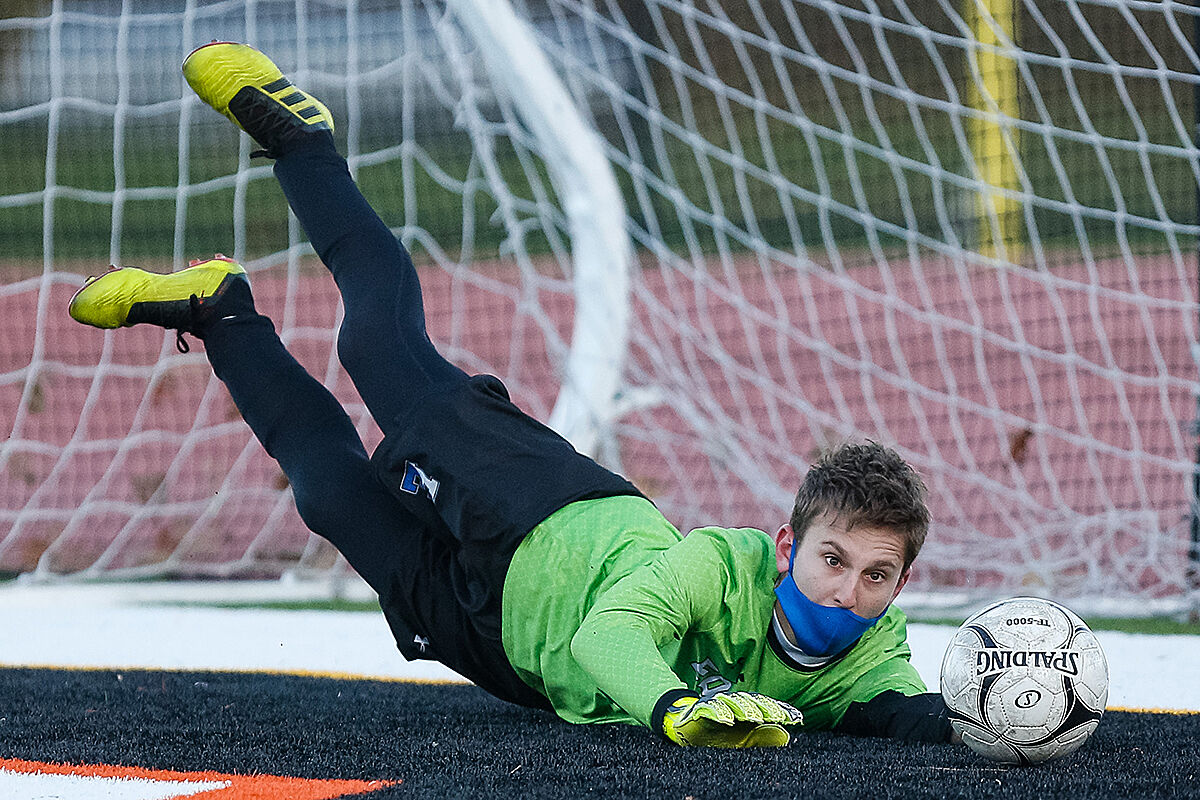 Will Mellis with the PK save. 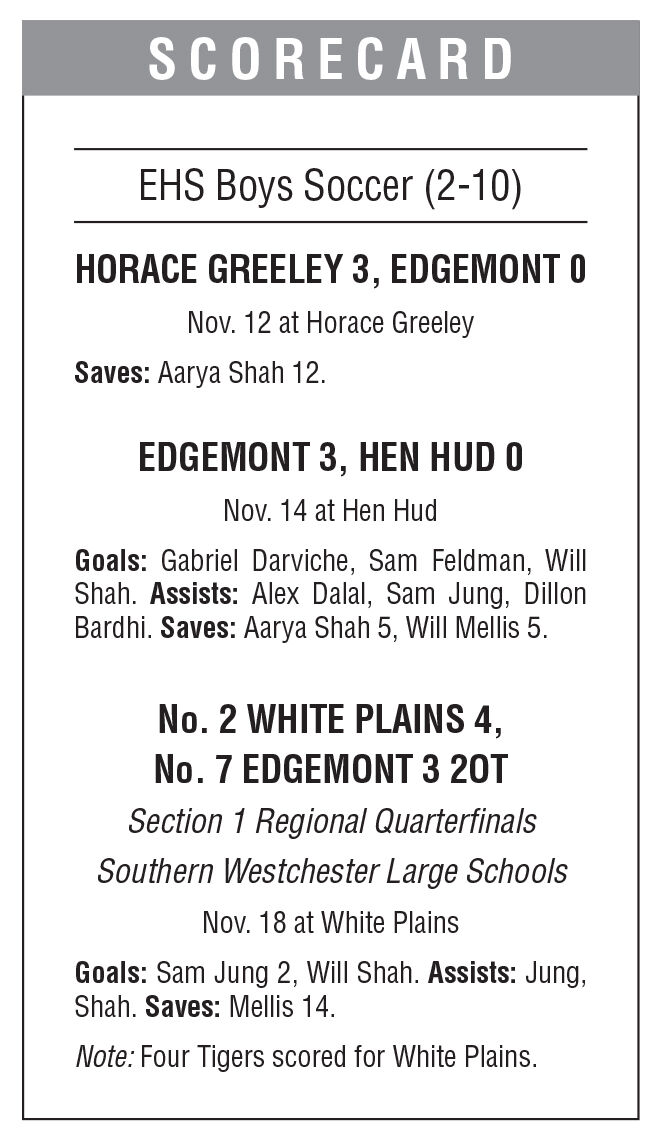 A David and Goliath reference seems appropriate here. If only…

…Goliath hadn’t held on for the victory.

By a 4-3 score in double overtime, No. 2 seed White Plains, a Class AA power, hung on to defeat No. 7 Edgemont, a team that moved from Class B to Class A this fall, a team that won only two games, featured a six strong sophomore class and any other year would not have made postseason, a team that was playing the final half game of the regular season and the Section 1 regional quarterfinals with its fourth — yes, fourth — option at goalie.

No outsider would have guessed that junior Will Mellis, who made 14 saves against White Plains, including stopping a key penalty kick in regulation, was not only not Edgemont’s starting goalie, but not a goalie at all.

“He had fun,” coach Mike Cozza said. “He was pumped every time he made a save and I think the guys fed off that. The more saves he made we knew he could keep us in the game. We built on that. It all started with Will.”

Cozza didn’t tell White Plains about Mellis until after the game. “The coach was shocked to hear that,” Cozza said.

With veteran junior captain Sander Schuchat quarantining due to potential COVID-19 exposure starting before Edgemont’s final two regular season games, backup Aarya Shah, a junior, getting hurt in the final regular season game after colliding with an opposing player from Hen Hud and third option Ethan Lei, a senior, on quarantine, that left Mellis, whose lone experience in net was during a couple of junior varsity blowouts back in the day and some varsity practices.

“We put Will Mellis back there and he had a great time,” Cozza said of Mellis’ varsity goalie debut. “He looked comfortable, very confident. He has good hands. He’s a tennis player, so his hand-eye coordination is there and he kept the shutout for us.”

Against Hen Hud, Mellis made five saves and held the shutout for the final 35 minutes of a 3-0 win.

“I just played for fun sometimes, but I don’t have that much experience,” Mellis said. “It puts pressure on me, but I am just doing whatever is asked of me to help the team win.”

The Panthers appreciated what Shah and Mellis did in their limited opportunity in net.

“Even though our main goalie is out you have to trust the second goalie and then the third goalie because in the end that’s who we’re going to play with for postseason,” senior Dillon Bardhi said. “You trust in their abilities and treat them like they’re the first goalie.”

Shah had been doing well in goal in his game and a half, holding Horace Greeley to one goal until the final minutes when the Panthers pushed up to try to create offense and he had a shutout for 45 minutes against Hen Hud before the injury.

“I think Aarya played his game, stepped up for Sandy,” Bardhi said. “He held his own, made some saves. He’s not as vocal as Sandy, so there’s not as much communication back there and the centerbacks needed to step up for that. The transition was good overall.”

He added, “Will for not being a goalie did very well. He had a clean sheet, which is very impressive.”

And yet the underdog, starting only three seniors to White Plains’ nine, almost pulled it off in the playoffs.

“I said when we were warming up that the soccer gods are doing this to us for a reason this year,” Cozza said. “They made us move up, they made us play the competition we played, and then a AA White Plains team in the tournament when it’s 20 degrees outside. They were setting us up for next year because at this time of year it’s going to be the state finals and if we do move back to B we’ll be ready for it. There’s a reason we had to go through this this year and it’s going to be rewarding next year.”

Competing with White Plains wasn’t easy, however. The home team led 2-0 at halftime. “Mellis made some great saves to keep it 2-0,” Cozza said. “As the game went on the more talkative we grew. At halftime we had a little talk to keep them up and keep them positive.”

Five minutes into the second half, junior Sam Jung scored after he, Bardhi and sophomore Will Shah played the ball down the side. That goal definitely took White Plains by surprise.

After the Panthers committed a hand ball in their own box, White Plains was awarded a penalty kick, which Mellis stopped with a dive to his left. A few minutes later, Jung scored on a PK to tie the game at 2-all.

White Plains scored once again prior to the second mask break for a 3-2 lead, but with 10 minutes left Jung fed Shah for another game-tying goal.

“We had chances in overtime as well, a couple of through balls to Gabe [Darviche] and we had one or two offside that were just barely offside if it was offside,” Cozza said.

After a failed clear by Edgemont, White Plains put the winning goal past Mellis in the second overtime. “It was nice ball in upper 90, nothing we could do about it,” Cozza said.

Cozza and assistant David Villalobos wanted to take the pressure off their players, so in the practice before the playoff game they kept things loose by having a four-team mini-tournament.

“We had some fun and we told them to play the same way against White Plains and we’ll be in the game,” Cozza said.

Despite a 2-10 final record, the coaches spent the season helping their players build trust with one another and that’s what helped make players like Bardhi, Jung, Shah and senior captain Gabriel Darviche into such a force up top.

Shah was a weapon at both ends, while senior captain Alex Dalal, Lei, sophomore Max Yang and junior Michael Mirtchev were key defenders this season. Sophomores Tapan Sidhwani, Liyam Yaghoobzadeh and Ben Kirsch were also forces for the Panthers.

“Hen Hud started it and today it continued,” Cozza said. “They trusted everybody, no matter who was on the field. They trusted their teammates and it showed.

“[White Plains] is not one of those games you lose and you wonder why you didn’t play well. It’s the one time we lost, but we played our hearts out and left it all on the field. We couldn’t give any more.”

Trust and communication were key for Bardhi. “At first no one was talking — there was no communication — so we were not really successful,” he said. “At first we would only pass to people that we knew, people we could trust would be on the ball.”

The Panthers were competitive in most of their games this year and while they were hoping to sweep the final week and win three to end the regular season, they did take 2 of 3 to gain some momentum.

“We knew that every team would make the playoffs, so we had to keep working every practice to try to get better,” Mellis said. “We knew we’d have that shot to upset someone in the playoffs so we kept working.”

Prior to the White Plains game, Bardhi said, “We’re the underdog, so our chances are going to be slimmer, but what a story in the making if we win.”