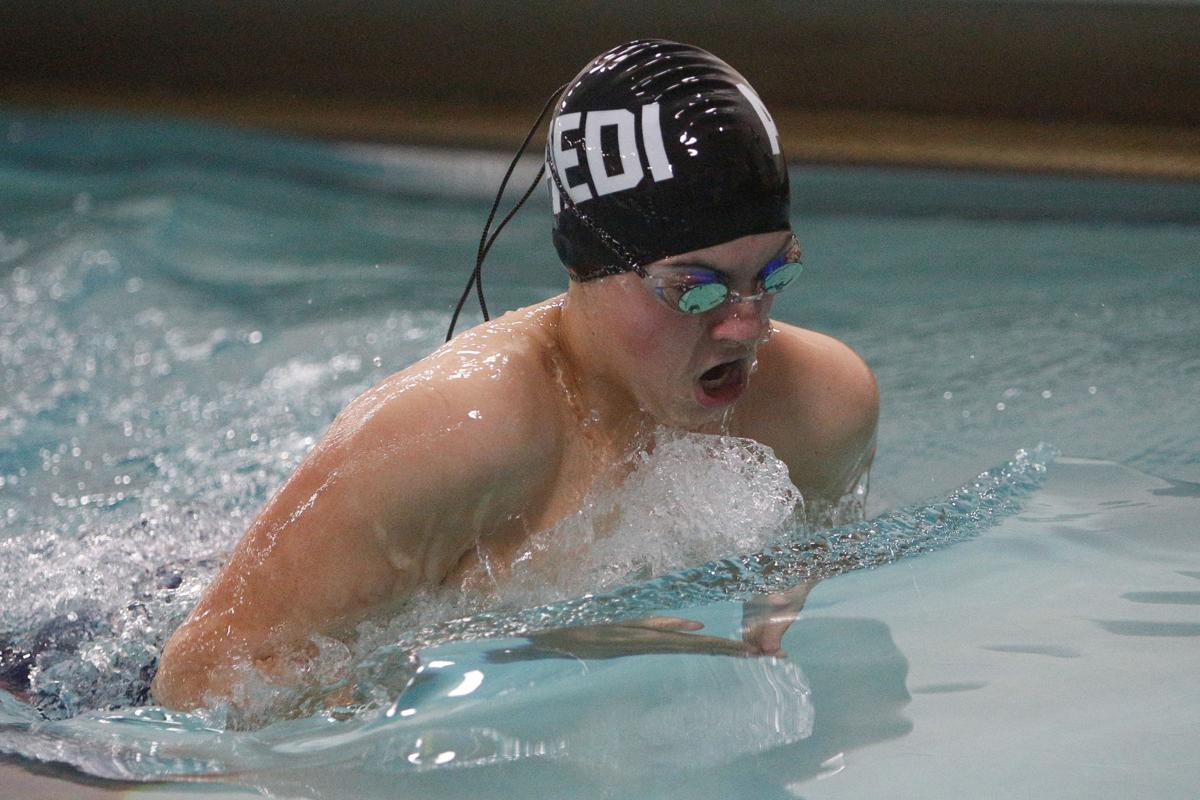 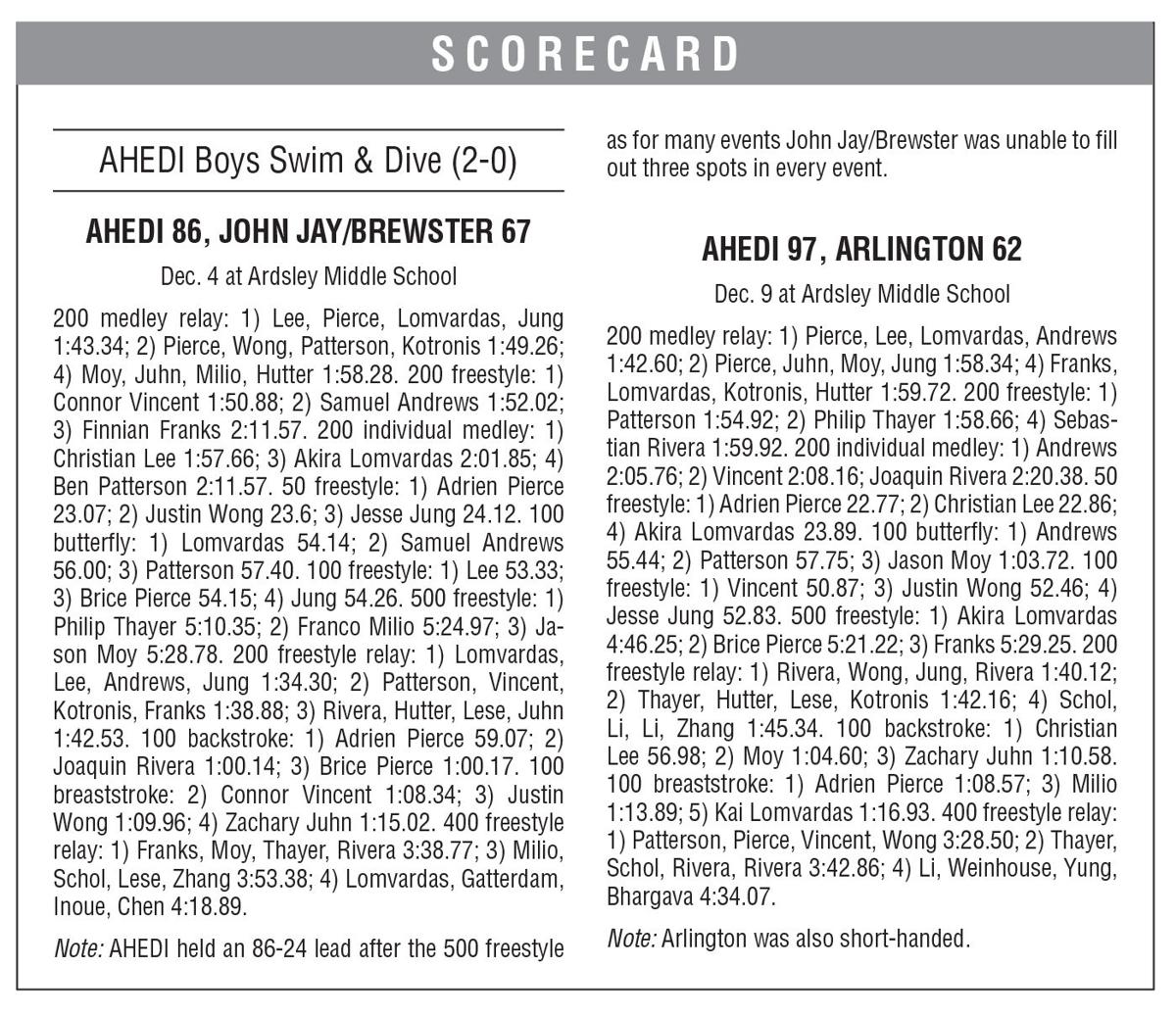 The surprise Section 1 runner-up team from last winter is certainly going to feel the loss of elite graduated swimmer Jon Ma, but the Ardsley/Hastings/Edgemont/Dobbs Ferry/Irvington boys came back with more depth and faster times overall. This was on display in the first two blowout meets of the Conference 1 season.

“It’s one of the best teams, I believe,” Edgemont senior Max Li said. “We’re a lot stronger this year and we’ve been getting stronger every year since I came here. At first we were barely able to stay in the division and I was one of the faster swimmers, but now I’ve seen many of my teammates shoot past me in speed, so now I consider myself to be somewhat average. We have a good shot of winning many things this year.”

Li is a fifth-year AHEDI swimmer, so he was around when the team didn’t have much firepower in the water. That has evolved into powerhouse status, much the way the girls and their SHEDI team in the fall went from barely hanging on to being a two-time section champ.

“I feel like we’re spreading the wealth a little bit,” coach Tobey Saracino said. “We have more depth this year that’s really pulling in points. It’s not just the top spot, but we’re pulling in firsts and seconds consecutively, which is great for these kids. We’re trying to get these kids on the blocks and incorporated into every event to see what their level is at this point.”

Knowing they wouldn’t be challenged much early on, the first two meets were a chance for the coaching staff to get a better feel for the team, as opposed to putting each swimmer in his best event and unnecessarily going for broke too early in the season.

“We’re really just trying to get a gauge for where the guys are right now,” Saracino said. “Coming into the season you may see some fast times and you may not. It’s the time to get a good idea of where they are and then start filling in some of the holes as we go forward. This group has veterans that are very fast coming in.”

In the team’s second meet against Arlington, Edgemont sophomore Akira Lomvardas hit the state cut time in the 500 freestyle, while Edgemont freshman Christian Lee came close in the 50 freestyle and 100 backstroke. Both were state qualifiers last year and have high expectations this winter.

“From last year my teammates have cut down seconds on races and that’s big for our team,” Edgemont freshman Justin Chen said. “Seeing that early is good and I’m sure they will improve more throughout the season.”

Chen is in his second year on the team and while he’s not yet chasing state cut times, he does want to make it to sectionals at some point in his career. “That’s a goal I’d wanna do,” he said. “I want to improve technique, time, speed — everything really. In the two meets I’ve improved, so that’s good.”

Edgemont senior Jesse Jung is in his fourth year on the team and he’s seen steady improvement and time drops over the years.

“It was consistently going to practice, being on top of my schoolwork and balancing it, which was hard,” Jung said. “I got through it and it’s senior year now. It’s very cool how far we’ve come.”

For Li, it’s the friendships, bonds and camaraderie built that helps push him in the water.

“Since I started swimming on the team in eighth grade I have built a lot of interesting friendships on the team, whether it’s friendly or funny or chatting or some physical joking or simply in the water itself,” he said. “I’ve built a lot of strong bonds that are very valuable with kids from all of the schools. You need that for any sports team.”

That’s Li’s motivation: “When competing you often find it very stressful, so it’s essential to have friends back you up. Even in practice usually you’ll think the same thing. You might be trying something different or changing something to get slightly faster, so it helps to have people behind you. That social interaction is valuable.”

With five schools and six grade levels it’s an interesting and diverse mix for AHEDI, but it’s a formula that is paying dividends and Edgemont is helping lead the way with a growing talent pool.

“Christian and Akira coming back are very strong,” Saracino said. “Justin Wong has dropped times considerably. Jesse Jung is swimming fast from the start. It’s great to see where Franco Milio is and we’ve got him and Kai Lomvardas, some of the younger kids we’re starting to get a gauge on as well.”