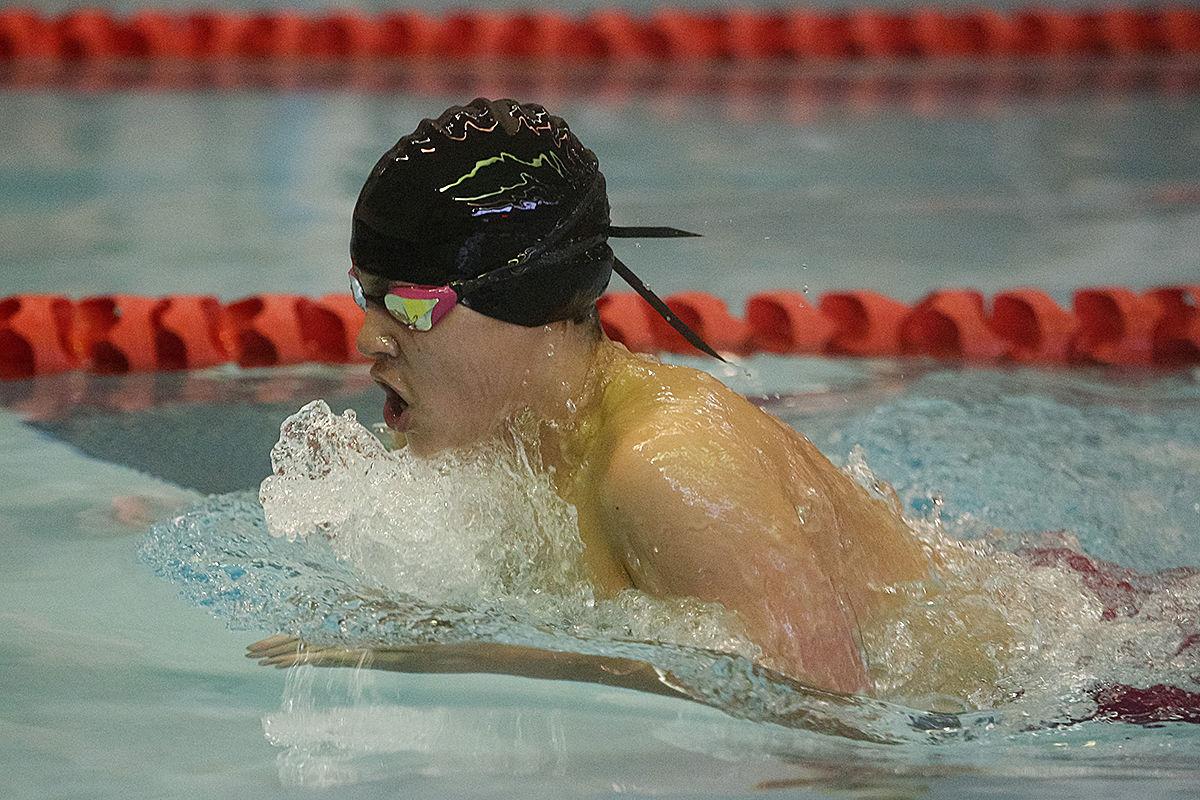 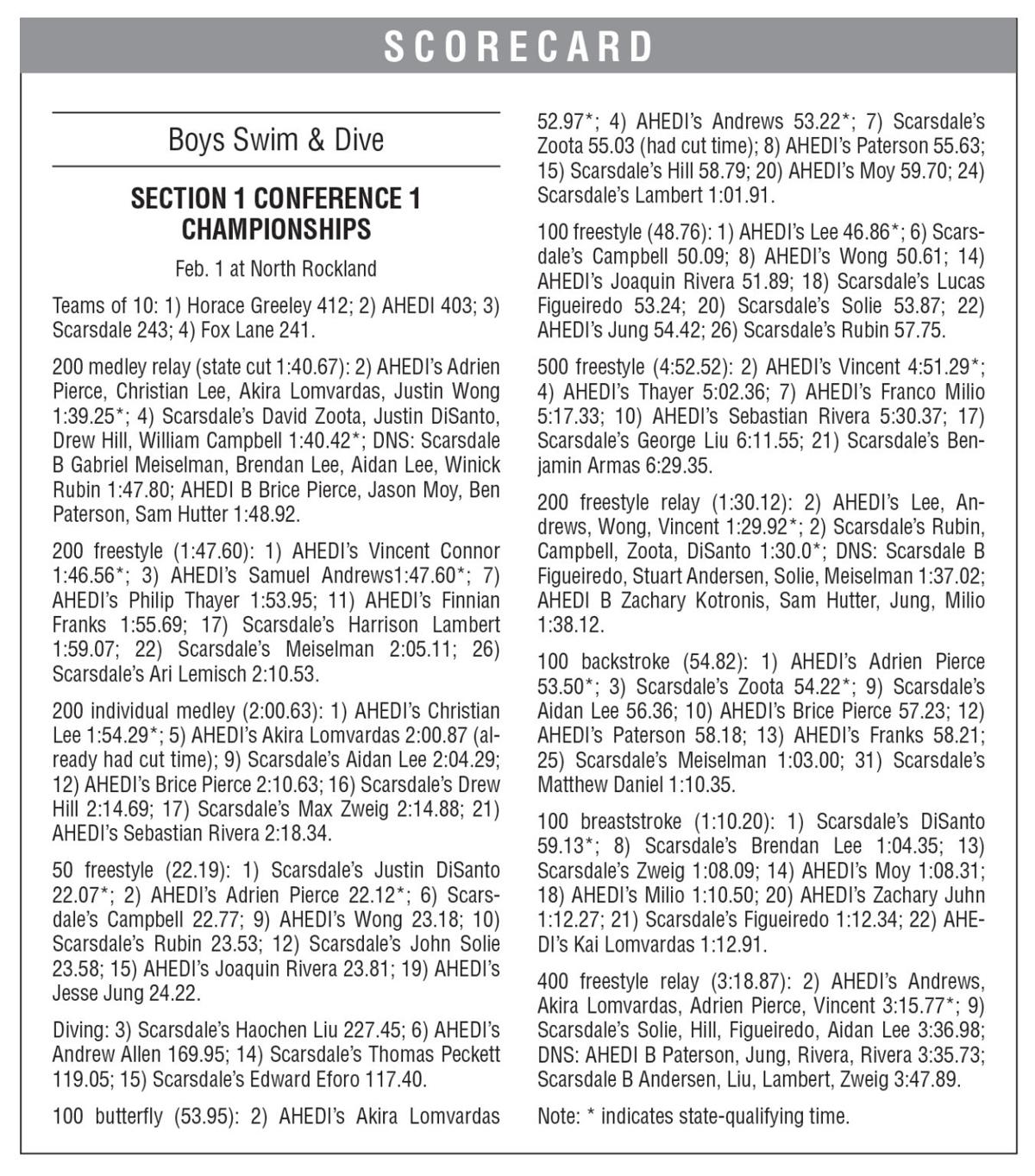 In postseason swim meets, 40 points are awarded to the winner of each relay, 34 to the runner-up. Had the Ardsley/Hastings/Edgemont/Dobbs Ferry/Irvington boys won any of the three relays, they would have beaten Horace Greeley for the second time this season.

Instead, Greeley avenged a regular season loss at the Section 1 Conference 1 Championships Saturday at North Rockland. Horace Greeley swept the relays, with AHEDI the runner-up each time, and narrowly won the team title 412-403.

That final relay to close out the meet, the 400 freestyle, saw Greeley top AHEDI by .99 seconds. The gap in the 200 medley relay was .71 seconds, while the spread in the 200 freestyle relay was .92 seconds.

AHEDI is already looking forward to the season series tiebreaker at sectionals Monday and Tuesday at Felix Festa Middle School in Rockland.

“We still have some tricks up our sleeve for sectionals, so I’m curious to see what happens there,” coach Tobey Saracino said. “Overall it was a very good meet for these kids. Yes, it’s always great to come in first, but to come in second and have a solid meet to a team that never really loses, except to us, is just really exciting for these kids. Now they have a lot more to go after at sectionals.”

“We just had a solid day,” Saracino said. “We had some great swims. Zach Juhn went his best time ever in the 100 breaststroke in his senior meet. He went down from 1:17 to 1:12. That’s a huge drop for him and his parents were here to see it. It’s just really exciting when everybody has great swims.”

AHEDI was the Section 1 runner-up last year and is looking to unseat Greeley as the top team.

“It was really fun to go all the way and get second place here,” eighth-grader Kai Lomvardas said of his first championship meet. “I’ve learned a lot of things this season. The older kids on the team are really good at cheering on the younger kids and they’re good at making us feel good.”

He added, “We need to swim fast at sectionals and win.”

The team has the experience of triumph and defeat to serve as motivation going forward.

“It’s been a great season and they’ve done a great job proving themselves,” Saracino said. “And we’ve got plenty more to go. I told them, ‘Today was fast — next meet’s gotta be faster and states has to be the fastest.’”

Scarsdale may have been a distant third place with 243 points, but the Raiders had a tremendous meet, especially in comparison to last year when they sent a small group to sectionals and only two individuals to states. At conferences, the Raiders qualified both the 200 medley and 200 freestyle relays for states, along with two individuals, who had already hit their cut times during the regular season.

“They showed up big-time,” coach Inga DeNunzio said. “We had a lot of team discussions and relay discussions about them wanting to make it. It almost seemed at one point like I wanted to make it more than they did. It finally switched that they were like, ‘Ya know what, we can do this.’ The last couple of weeks definitely upped the confidence level and also upped the desire. Some of them don’t want it to end. It’s either extend it now and go to sectionals or it’s over. Or it’s extend it and go to states. They all wrapped their heads around that, stepped up and went for it.”

Justin DiSanto won a pair of conference championships in the 50 freestyle and 100 breaststroke, giving him extra confidence heading into sectionals.

“The medley relay and the 200 free relay — that was the goal from Day 1 from our preseason practice,” DeNunzio said. “It’s a team and we have a lot of great swimmers individually, but collectively we haven’t had too many relays do as well, so I wanted to put that focus on doing something together.”

Brendan Lee is a past state qualifier who also had a tremendous meet as a senior.

“He just took four seconds off his 100 breaststroke time,” DeNunzio said. “We’ve been working so hard on that and to see him do that today really helped. He’s been working so hard and he’s not swimming year-round. He focused a lot on school, on academics. He’s going to Villanova, which is what he wanted. This is a bonus season for him and he wanted to do this for himself.”