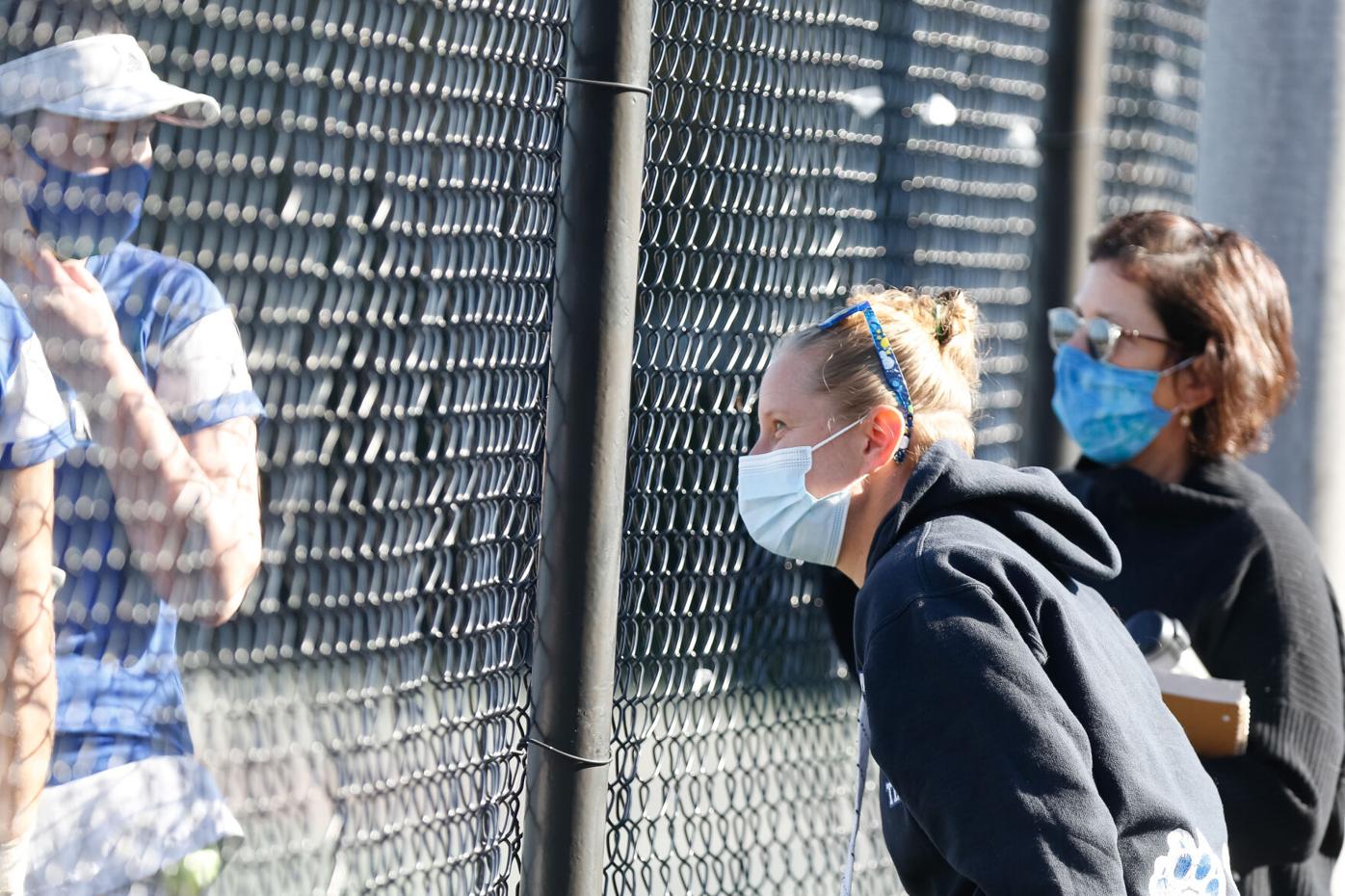 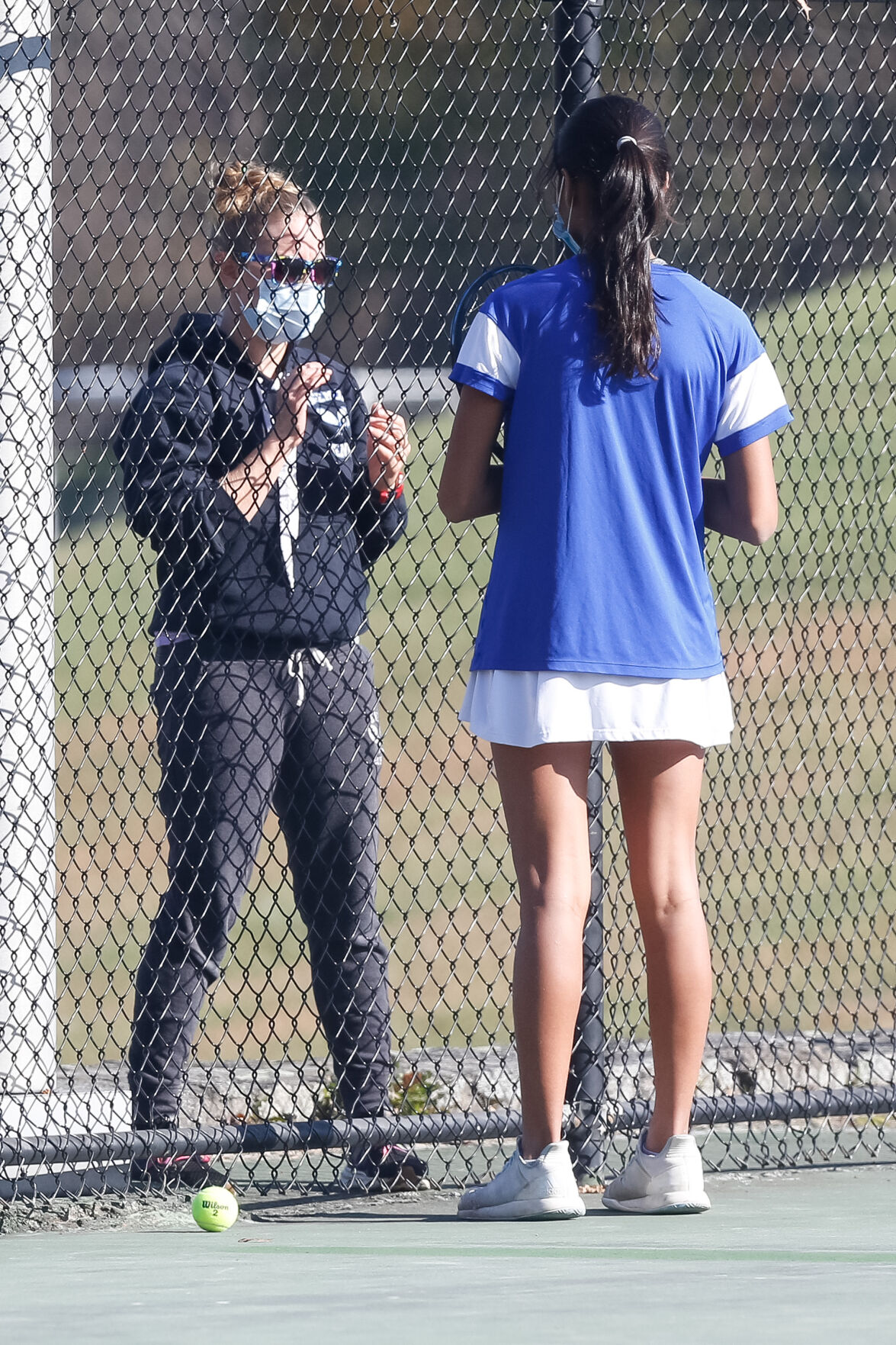 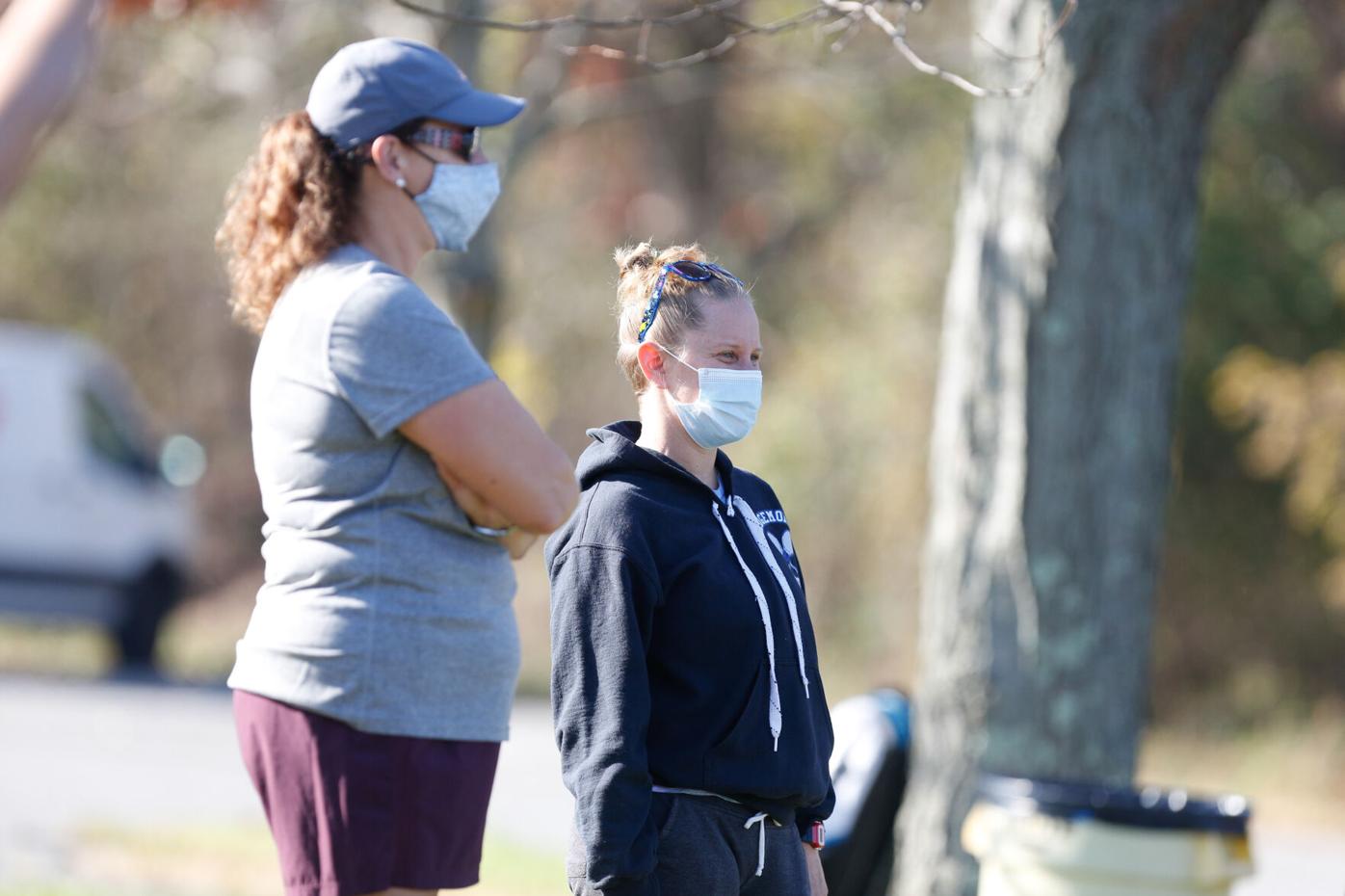 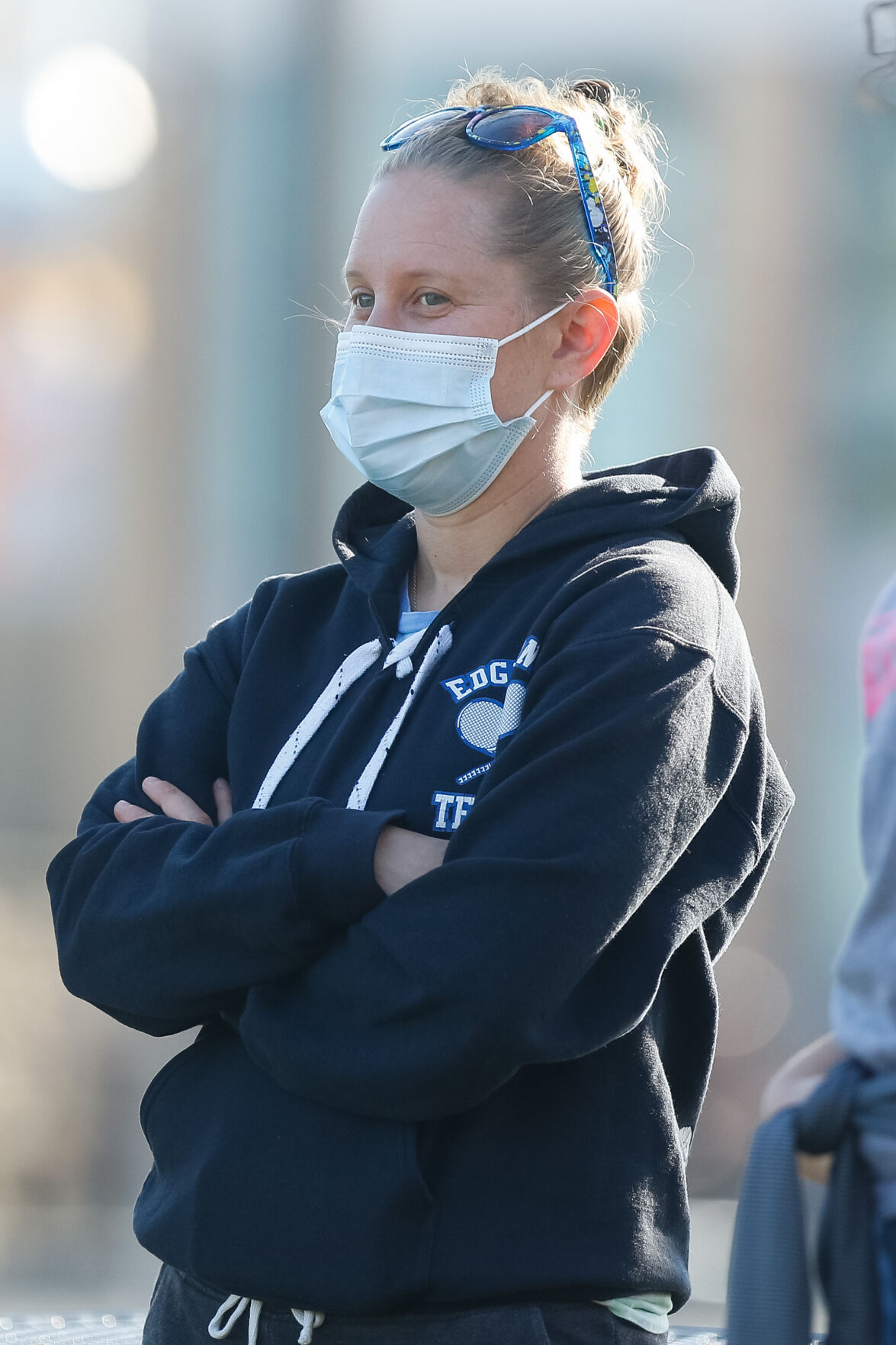 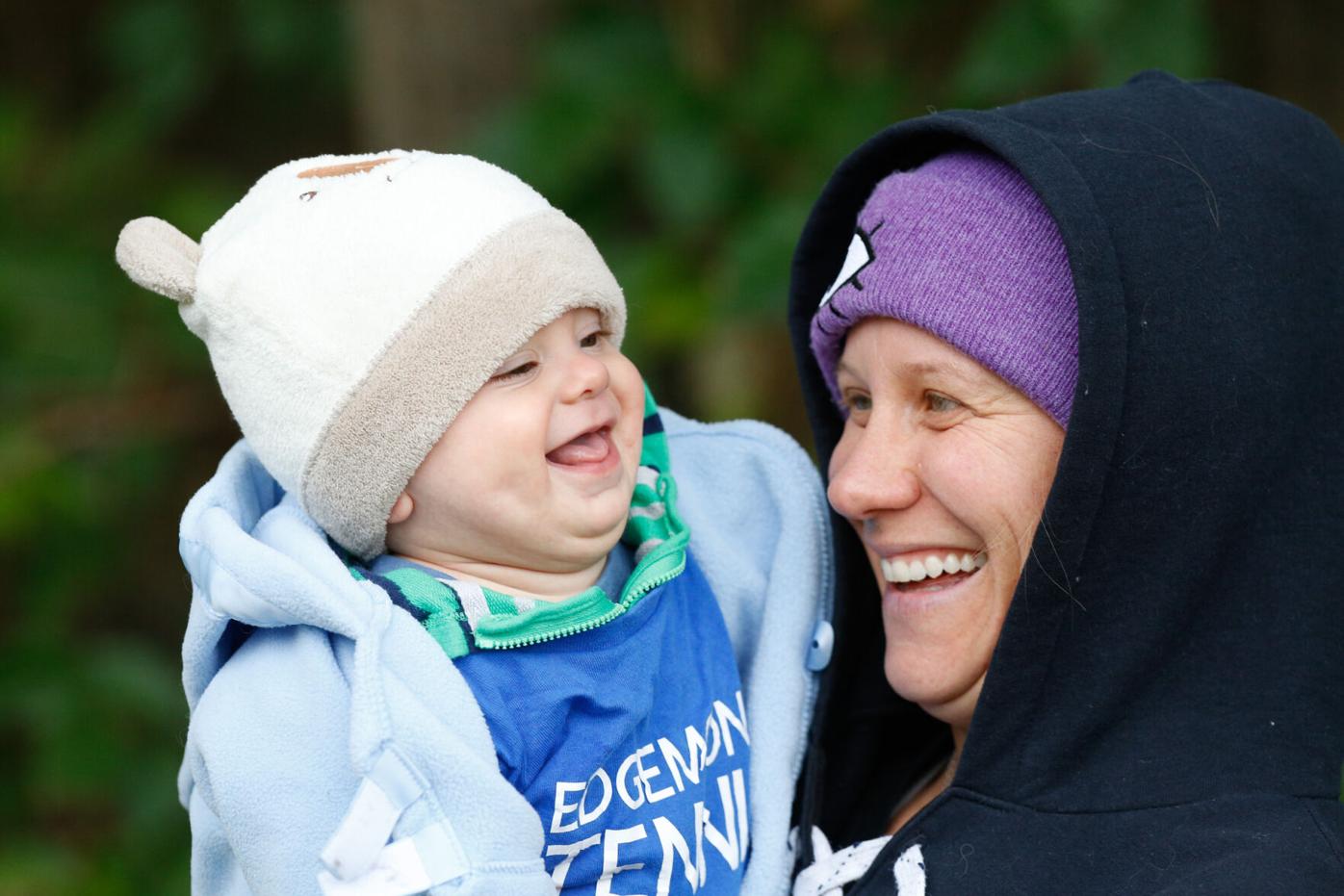 Zander and Katie Feinstix in the fall of 2019

Katie Feinstein may have spent her formative years as a three-sport standout at Edgemont High School, but it was coaching tennis the last nine years at her alma mater where she truly “grew up.” Not only did she learn a lot coaching tennis for nine years, but she changed careers, got married, had a baby and even changed her last name to Feinstix, a combination of her Feinstein and wife Jacqui’s last name, Stix.

The 1999 EHS graduate announced to the girls tennis team early in this COVID-19 impacted season that this fall would be her last coaching the Panthers. It was a difficult, emotional decision, but by the time the season started a month late, Feinstix and her family had already moved from Yonkers into their new house in New Paltz.

Feinstix called coaching at Edgemont “an honor” and “one of the joys of my life,” and she knew the only thing that might have prevented her from relocating would be the student-athletes she had become so connected to. That said, the pandemic has opened her eyes even more to the world around her and going from a “postage stamp sized lot” to a spacious acre upstate was a decision Feinstix and her family will not regret.

In her adult life, Feinstix has been in catering, media and was a physical education teacher in Connecticut, where she coached middle school tennis before taking over for Jim San Marco. Now she is a yoga instructor — as is Jacqui — and a personal trainer. She has finally found her niche.

“Katie has always had a fantastic relationship with her players,” Edgemont athletic director Anthony DeRosa said. “She was a student at Edgemont, she has that connection back to Jim San Marco and she’s really kept the program competing at a high level, taking kids to states pretty much every year. She’s definitely going to be a big loss to the program. I was a little taken aback when she told me — it kind of came out of left field — but it’s good for her, good for her family and I’m sure she’ll find somewhere to be involved in tennis.”

DeRosa now has to find a boys assistant and a girls head coach and he’s hoping he might be able to “get a two for one,” saying, “I’ll probably start looking at that when we come back from winter break.”

As and Edgemont student-athlete, Feinstix had multiple varsity coaches in each of her three sports, tennis, basketball and softball, but the one that stuck out for her was her tennis coach senior year, San Marco, Edgemont Class of 1963. San Marco had a significant impact on Feinstix in that short three-month season that has never left her. She and Nina Zeitlin made states for the second time, winning the Section 1 title as seniors, despite Feinstein suffering an injury.

“I think I learned the most as a coach from San Marco,” she said. “If you’ve watched sports with Coach San Marco he doesn’t miss anything. And he’ll give you a drill on how to correct and improve all those things. I’m a different kind of coach. I’m a little more standbackish.”

Feinstix uses some of his famous San Marco-isms, and being in touch over the years his thick binder of drills, but took her own approach to building a tennis family and using fitness, often yoga, and a good mindset to fuel her players from the No. 1 player to the exhibition player.

“These kids spend so much time together for the three months, more than you see your family, that it has to be a positive vibe or else it’s not fun,” Feinstix said. “At the end of the day you’re here to compete and to play and to be outside. Yeah, it’s fun to win, but we’re here to play tennis, a lifetime sport. A small percentage will play in college, so the high school experience is like nothing else.”

When San Marco was ready to hang up his coaching hat, he handed Feinstix to then-athletic director Ray Pappalardi.

“I’ll never forget the phone call when Coach San Marco called me and said, ‘Are you ready to coach? I’m ready to hang up my shoes, are you ready to step in?’” Feinstix said. “I had been coaching middle school in Connecticut and I wasn’t sure if I was ready to just step in, go into a varsity program, but I knew this opportunity wasn’t coming along again. As I started talking about it I knew I could.”

In San Marco’s final year as the girls coach in 2011, he had not only the two-time New York State doubles runner-up team of seniors Christine Ho and Casey Rogovin, but the third place team of then-freshman Tomo Iwasaki and then-sophomore Alexa Goldberg.

The next two years under Feinstein, Iwasaki and Goldberg placed second and first, and remarkably Iwasaki then took second in the state in singles as a senior, an amazing feat.

Though the Panthers didn’t send anyone to states from 2015-17 — then-sophomore Ariella Zagorsky and then-senior Shruti Kanna lost the third-place match to Harrison in three sets in 2017 — the duo of Zagorsky and OIga Lew-Kiedrowska made states, advancing to the quarterfinals as juniors in 2018, after topping Scarsdale 7-6, 7-6 in the third-place match at sectionals, and the round of 16 as seniors as Zagorsky suffered an injury in sectionals, much like Feinstix had before her. In the third-/fourth-place match that year, with Section 1 sending its top four, Edgemont defaulted to a different Scarsdale team due to the injury, knowing a spot in states was guaranteed.

Starting the spring of 2013, Feinstix was the boys roving tennis instructor under head coach Jeff Menaker, who had succeeded San Marco with the boys team. Menaker was Feinstix’s roving coach the previous fall.

“He was a huge help back then,” Feinstix said of Menaker. “He was my assistant and he was a wealth of information in high school tennis. That was awesome. And he knows tennis. He knew every girl we played, everything about their tennis game.”

When junior varsity boys tennis coach Mark Romney replaced Menaker for the spring of 2015, Feinstix, though she still worked with the younger levels at times, became the varsity assistant. Romney called her “the technical director for the program.”

“I have to say when I started with the boys I was a little concerned how they were going to treat a female coach and once I started it wasn’t a concern at all,” Feinstix said. “It was just something in my head. I think they are very different. The girls are more spirited with team bonding and the gear, all that kind of stuff, and the boys just want to play. None of this other stuff. I love them both, the different vibes. I think when push comes to shove they all have a love and a desire to play.”

Romney noted, “She relates equally well to both boys and girls. Not every coach can do that.”

For the five straight league titles the boys have from 2015-19 (there was no season in spring 2020 due to the pandemic), Romney credits his assistant coach as much as anyone.

“There are no better hands for that than Katie,” he said. “She has that amazing ability to quietly communicate with kids, to connect with kids. The other thing about her is that Katie’s horizons in the world aren’t limited to sports. I think that’s fair to say. She’s an extraordinary person in many regards. Sports is one of them. She lets the kids know sports is part of something larger.”

Both Feinstix and Romney enjoy their league rivalries, but they also like to challenge their teams. For them, a loss is better than constant 7-0 wins.

“It’s the only way to get better,” Feinstix said. “In the last league we were in we’d be competitive with a couple of teams and the rest you win 7-love. I said to the girls this year I’d rather go out and get challenged and lose than be out there wining 7-love. It’s how we improve and go up against these bigshots. We’re a little school, but we can hang with Rye and sometimes Scarsdale, and Harrison. I think we want to go up against them. It can be humbling some years, but we’ve got to push these kids.”

It wasn’t until the fall of 2019 that Feinstix got an assistant coach of her own with the girls as Wendy Zimmerman served in that capacity the last two seasons, which served not only the best interests of the tennis program, but allowed Feinstix to be a mom to her son Zander, the team mascot, who will turn 2 in February.

Zimmerman could certainly relate to Feinstix as a community member who had two boys, Max and Ethan Cutler, go through the program.

“It’s been amazing,” Feinstix said. “Last year Zander was a baby and I was still nursing, so she could take the bus and meet the team there and I’d be able to go home and put him to bed. It enabled me to be a mom and a coach, which for tennis is hard. You’re here at 2:30, home at 8 and it’s a lot.

“From the other aspect, having her eyes and ears and brain, she loves tennis, plays a lot of tennis, loves to watch tennis. She’s invested in Edgemont. I love her as a person and I love her as a coach. She’s a really good addition to the program.”

Romney credited Feinstix with being a great role model for the girls in her program as she coached each individual based not only on their skill level, but also taking into account their emotional needs and maturity level.

Junior captain Dani Friedman made a farewell video for Feinstix not only from this year’s girls team, but players going back to 2012 as well. It was called “Once a Panther, Always a Panther.”

One player called tennis “the best times I’ve had at school,” adding, “It’s something I look forward to every day.” Another said, “You made it such an amazing experience and I can’t imagine it without you. Thank you for teaching me about tennis, teamwork, sportsmanship, how to carry yourself on and off the court.”

When she graduated last year, Zagorsky said, “Coach Katie has been a huge support system for me the last six years. I can’t imagine having a coach who cares more about her players. She created a team where everyone can be comfortable being themselves and she made tennis enjoyable. I can’t imagine another coach being able to do that. This year we were all crying coming off the court after this long journey.”

From her own playing days to the success San Marco had as coach to the impact she herself has had on the program, Feinstix confidently hands off the legacy to the next generation of players and coaches.

“I’m going to miss Katie; Edgemont is going miss Katie,” Romney said. “Of course, her coaching career is not over.”