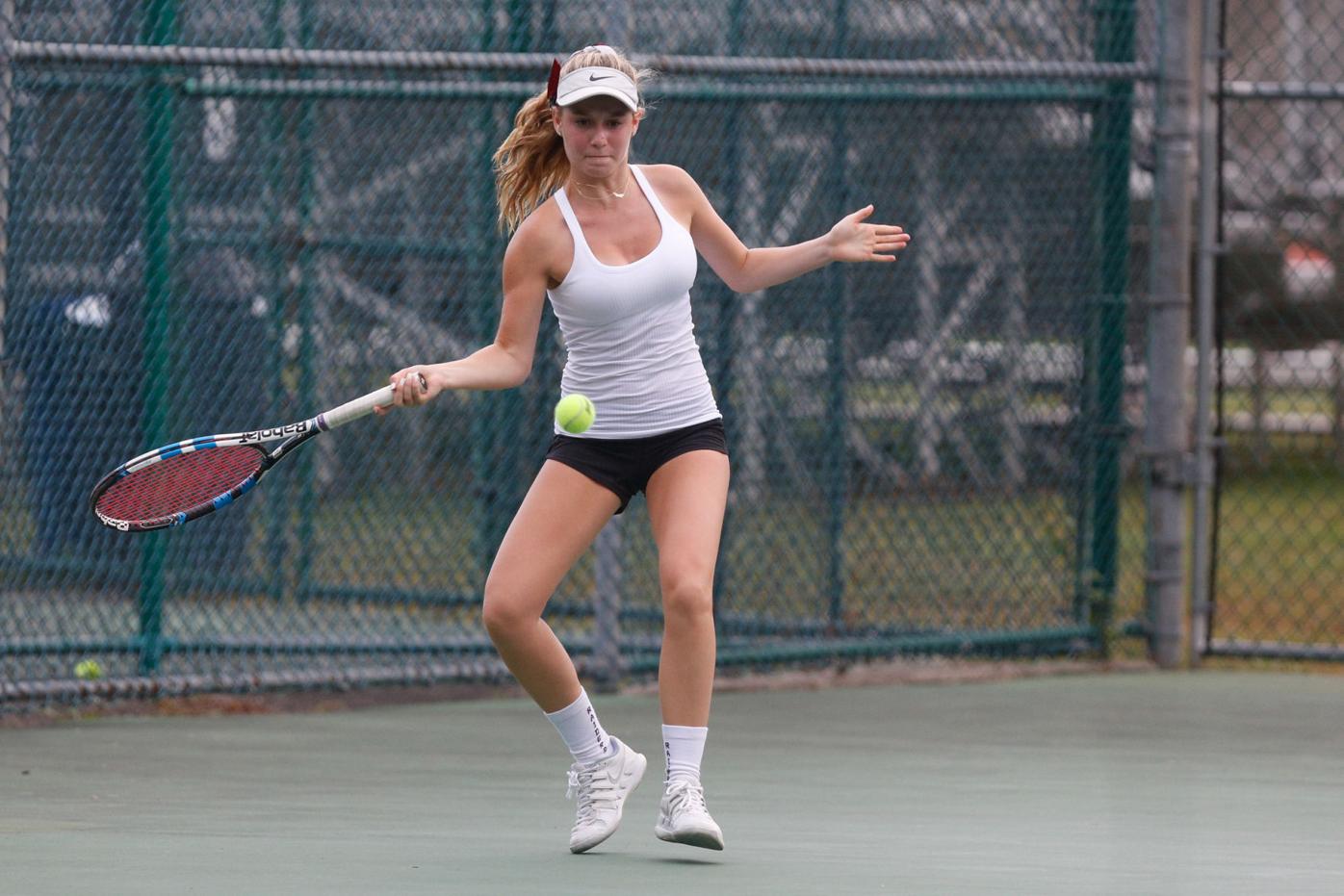 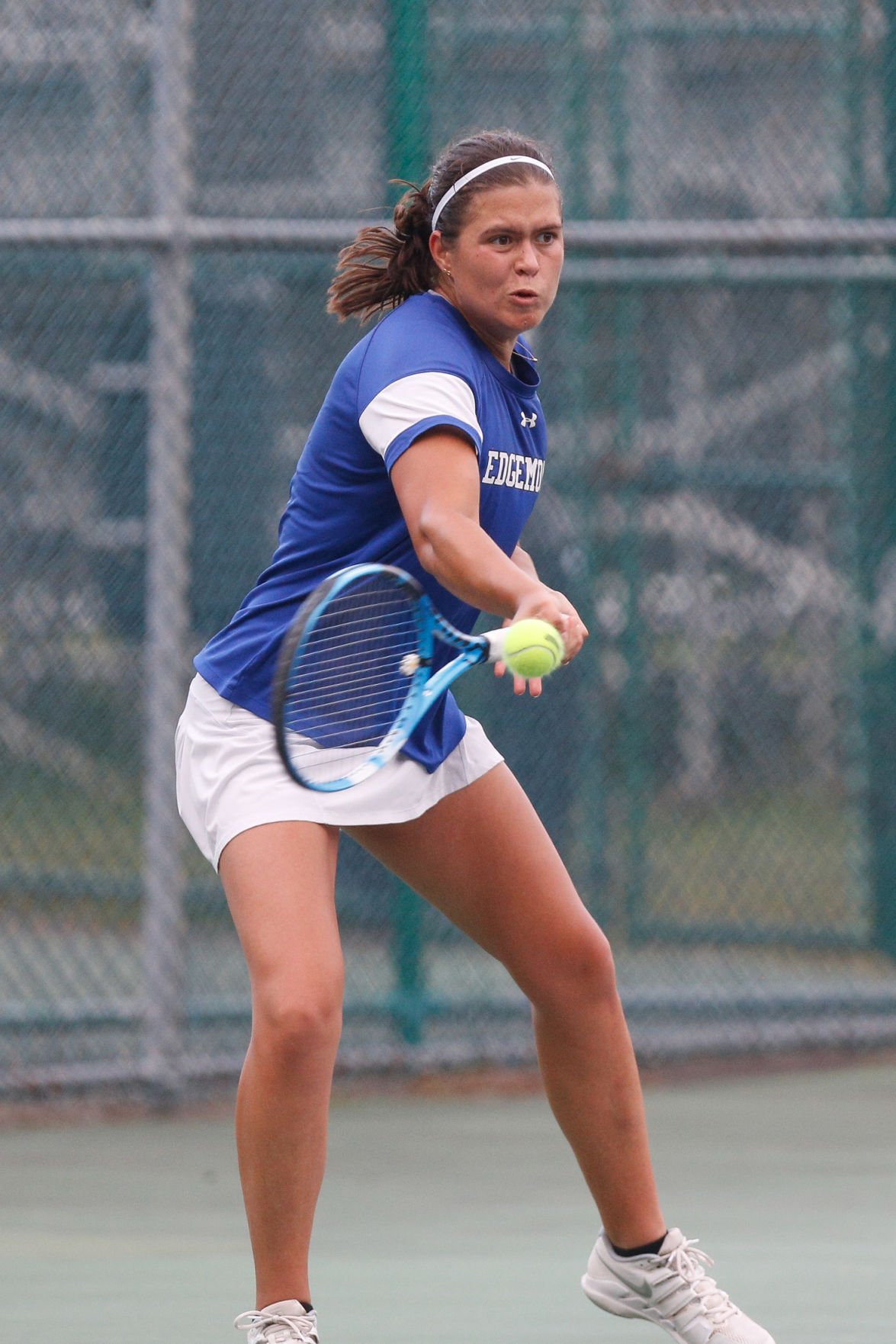 A large rock sits outside the tennis courts at Scarsdale High School with a plaque commemorating the girls tennis team’s decade-long dominance within Section 1, a 117-match winning streak that stretched from 1990-2000.

It was Ursuline that finally ended that streak after many close calls over the years. Coach Jennifer Roane pointed to the rock Monday, Sept. 16, following a 7-0 sweep of Edgemont and said, “I don’t want to jinx it, but I’ve been coaching here a long time and even when we did this back in the 2000s with that streak, we never started a season like this.”

She was referring to her team’s fourth 7-0 sweep in four matches thus far this season. “We’ve played some tough teams, league and nonleague,” Roane said. “I’m happy. The girls, especially some who didn’t have a great day last Friday [against Mamaroneck] even though they pulled out a win in a third-set tiebreaker, I said it was a new day and they needed to get back out there. They got that experience under their belts and they’re good.”

She added, “Can we keep this up the whole season? I don’t know about that.”

Scarsdale being successful this season is not a surprise with veterans — mostly juniors — returning for another year of action. The doubles lineup is so deep this year that the team that was one win away from states last fall is now playing third doubles this season.

“I think our goal after each match will be to reflect on what we did right, what we did wrong and get better and better,” Roane said. “We want to play our own game. If we’re playing someone weaker we can’t get into a routine where you’re playing their game because when you do play a team that’s better than you, then you’re like, ‘Oh, no.’ If you’re used to getting on the court and playing your own game I think it’s better.”

Senior Maggie Inirio-Akuetey and junior Emily Anne Tsai played together last year and were that one win away from states, having lost to the Edgemont duo of Ariella Zagorsky and Olga Lew-Kiedrowska, Edgemont’s top two singles players, in sectionals. This year, despite some chronic injuries, Inirio-Akuetey and Tsai feel they are stronger than ever, despite the Mendes sisters, Laura and Luisa, and the team of Megan Niu and Maggie Maronilla leapfrogging them in the doubles lineup.

“I feel like we communicate better and we’re definitely more aggressive at the net,” Inirio-Akuetey said compared to last year. “Being singles you play mostly baseline, so it’s an adjustment to come up, serve, volley. You have to get in that routine of doubles and communication.”

Being a fourth-year varsity player and a captain this year has Inirio-Akuetey excited for her final season.

“It’s my last year, so I want to go as far as possible,” she said. “Right now it’s to qualify for conference, place and take it to sections. Last year we came in fourth and we didn’t go to states. That was difficult and we know what it’s like so we want to get farther this year.”

Tsai said the two have known each other since late elementary school and they had played together at times over the years, but last year was the first chance they had to team up full time. They enjoy the challenges that come both from within the team and the other schools they face.

“I like being challenged,” Tsai said. “It does help. Maggie and I want to be able to go to states this year and it was very hard for us last year. It gets us ready for the harder matches. It’s better to win when you’re challenged than against a team that’s not good.”

With Scarsdale being so dominant, the expectations for Scarsdale tennis are higher than it has been in several years.

“This year we have a good lineup and everyone wants to win,” Tsai said. “This is our fourth 7-0 win and everyone is thinking about that. That’s helping us because we want to win 7-0.”

If the sweep streak should end, the winning streak should continue based on the team’s depth. “It helps because, say you don’t win, you have everyone else to rely on,” Tsai said. “You can have a bad day and your team can pick you up, so that’s good.”

The Raiders are also showing the ability to adapt when players are out. The team had to shift the doubles lineup with Luisa Mendes out against Edgemont and later in the week they knew they’d be missing singles player Zoe Tucker and doubles player Sabrina Siegel out on a field trip. Roane’s plan was to put Devin Goldman at third singles.

“Not only are they talented, but they’re flexible and accommodating to play in a different spot,” Roane said. “Devin said, ‘OK,’ which is good because you want them to say, ‘Put me in, Coach,” to contribute to the team. Tennis being an individual sport, sometimes that doesn’t always sink in.”

Edgemont coach Katie Feinstein was proud of the way her team played against Scarsdale, though she wasn’t expecting to get swept with a veteran lineup of her own that has fared better against Scarsdale in the past.

Edgemont also had some lineup adjustments in the absence of Alexis Chan and Lauren Alexander.

“It’s a super strong team we’re playing and there were a bunch of deuce games,” Feinstein said of Scarsdale. “I don’t think we played badly. I think we played up to our opponents.”

Most impressive was the first singles match between Tucker and Lew-Kiedrowska, which Tucker won 6-3, 6-3.

“These girls are playing some really good tennis,” Feinstein said. “They both move really well and they’re both really fierce and mentally tough. It’s fun to watch the best of the best. Zoe and Olga are competitors.”

Edgemont always plays tougher competition and larger schools to prepare for postseason and this match was no different.

“You’ve always got to go out there and do your best,” Feinstein said. “What I love about these girls is I ask what they did well or could have done better. Even though one of our dubs teams lost 0 and 1 they were like, ‘Coach, we had a lot of deuce games and I think we played really well. When you’re playing a team that might be better skillwise and you come off and say you did your best and lost, it’s all good.”

Senior Ellie Rieger and sophomore Lora Tikvanska, a varsity rookie, have played fourth through second doubles this season. Against Scarsdale they faced Inirio-Akuetey and Tsai, falling 6-0, 6-1.

“It’s a fun time, but it’s disheartening sometimes playing a team that’s better than you, but I guess if you try your best and keep playing well you can do better,” Rieger said.

Both Rieger and Tikvanska are typically singles players, so they are adjusting to their new roles.

“I hope to continue working as a doubles pairing and improve,” Rieger said. “I played singles last year, so I’m really new to doubles. It’s fun becoming better. It’s a completely different sport, really. The dynamic is interesting and I’m enjoying it.

“It was hard at first, but I’m hoping I’m improving.”

As a sophomore, Tikvanska has plenty of time to hone her doubles skills.

“You have to speak to your partner, communicate,” she said. “When you’re out there with singles you’re alone, so it’s a different mindset. You have to encourage your partner and yourself. Strategically you’ve got to hit a lot more angles.”

Only a handful of matches into the season together, Tikvanska and Rieger are finding their groove. “It’s interesting to see what you can learn from each team,” Tikvanska said. “As you play them you learn their weaknesses, you learn some new strategies and you have fun playing.”