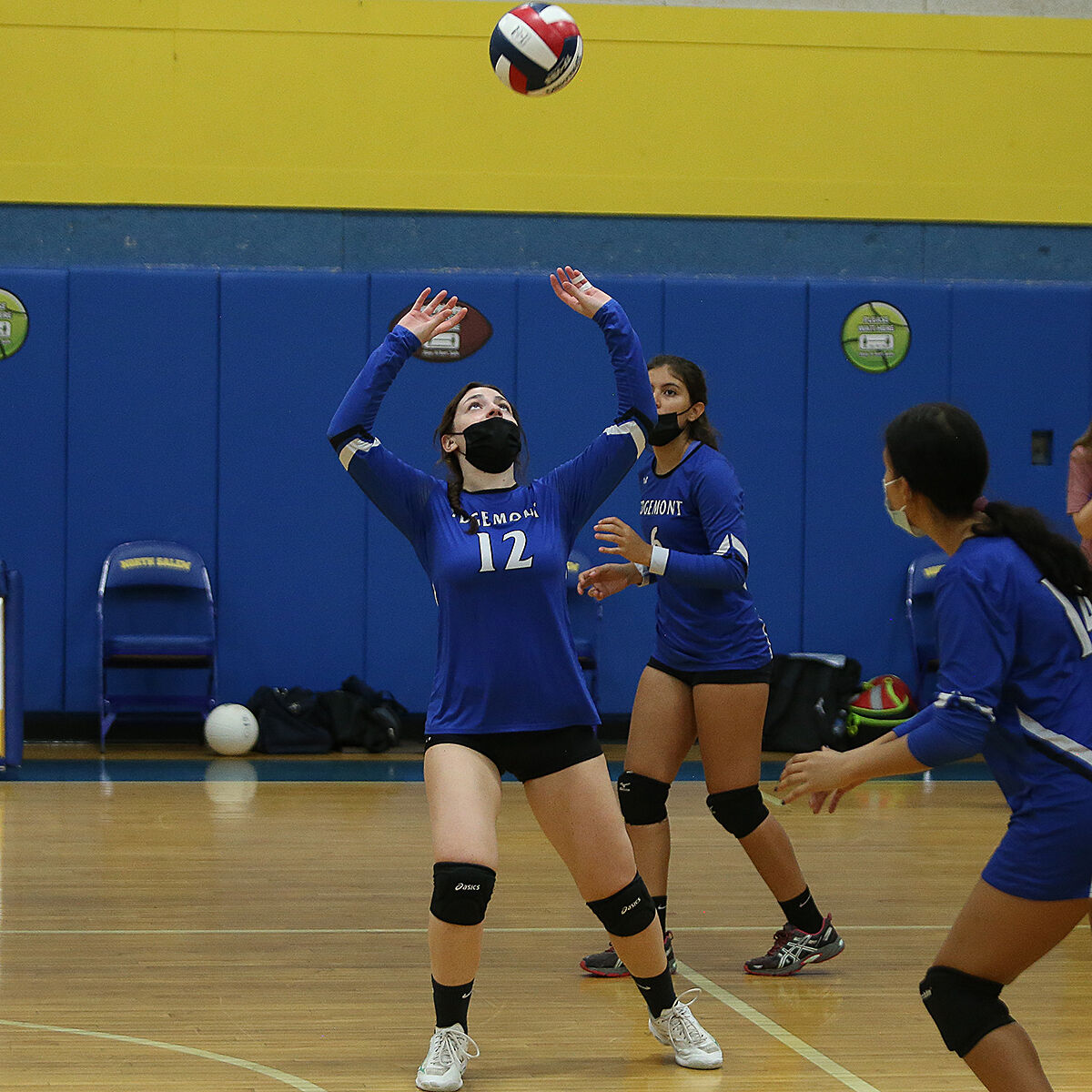 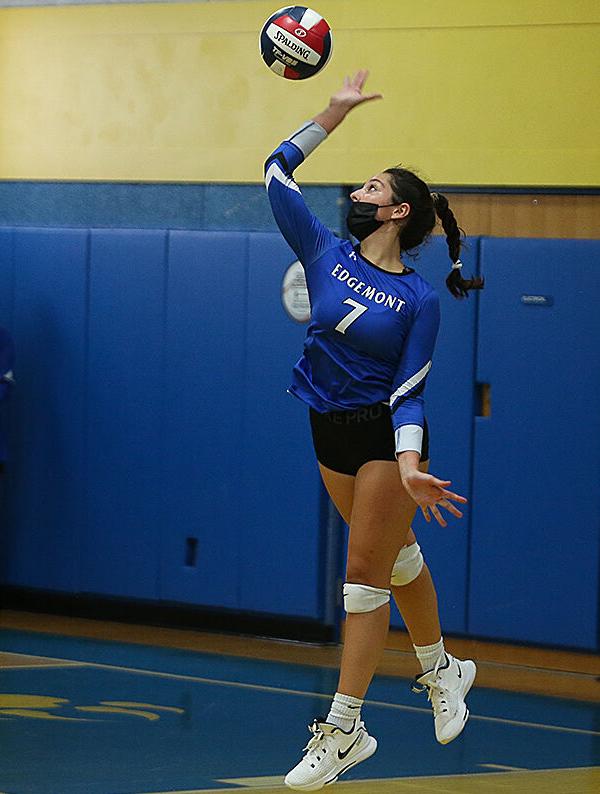 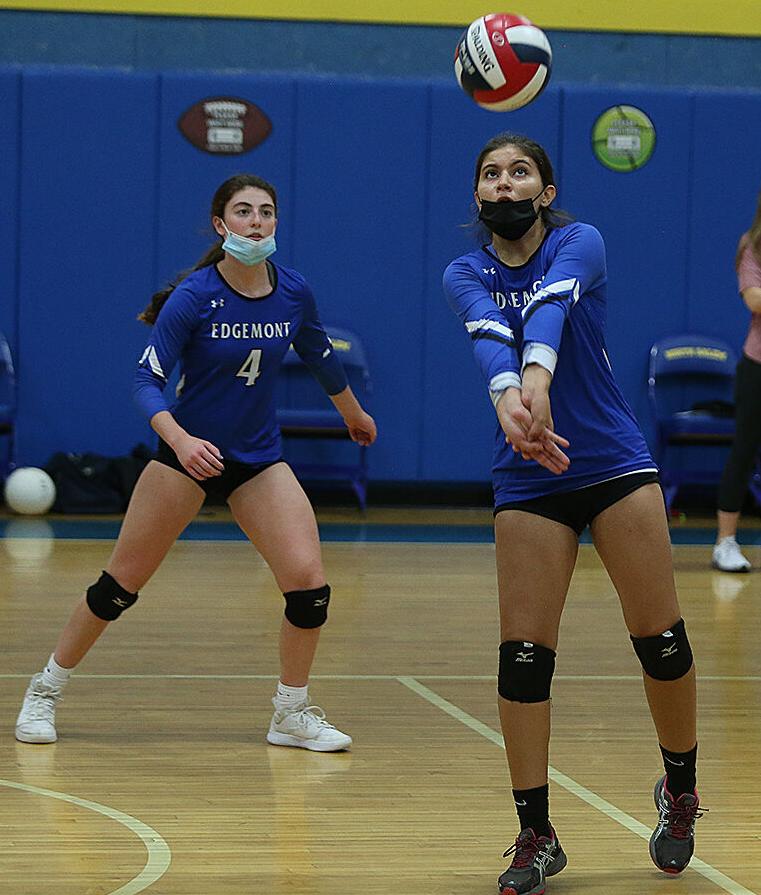 With starting setter Jimena Caballero a late scratch for Edgemont volleyball Monday evening, coach Kelli Kinlen and the Panthers had to adjust quickly against Pleasantville. Going from a 6-2 to a 5-1, relying on setter Emily Ferraro to set all the way around and moving Madison Frain from outside hitter to right side, Edgemont came away with a hard-fought 3-1 victory.

“It was good to see the elasticity they had as a team,” Kinlen said. “We came off a tough loss on Saturday, so I know that was a big reason why they played the way they did in the first set. But I was happy to see their hunger and their drive to play better and eventually win.”

“The first set the energy in the gym was really low from both teams, so there wasn’t anything to feed off of,” senior Carolina Angel said. “We played down and never felt like we were giving it our all and toward the end of the set we were hustling and thought we could win this. In the other sets we put it all together and played as a team.”

Frain and Ferraro were keys to the victory.

“Maddie hadn’t gotten much playing time and we threw her in today and she did really well,” Kinlen said. “I was happy to see they were working together with a new player. And Emily Ferraro played amazing. She was exhausted. She doesn’t normally set all the way around.”

Frain was nervous the entire match and took some time to get in a groove as she was playing an unfamiliar position and trying not to get in her teammates’ way at times, especially on serve-receive in the back row.

“I was definitely scared, but my team was so nice and helpful,” Frain said. “I didn’t know where to go, where to stand. I had to hit from a different angle than usual. My team helped and told me where to stand. I messed up a couple of times. The whole first set was me not knowing where to stand and everyone pushing me the right way. After a while I remembered where to stand at certain points. Then it went great.”

Not only did this match and victory help build Frain’s confidence, but that of her team, too.

“No matter what happens I think we can do this,” Frain said. “We have the best coach and everyone was super positive, nice and helpful. We really were a team today. Me playing this position never having played it before and everyone coming together to help me really showed we are a team.”

Angel had 19 kills in the win, leading the attack, while junior Sidney Burak had a big day with 13 kills. Also in the rotation were returning senior libero Saatiya Naik, senior Elizabeth Tonaj and freshman Alina Baimatova.

“Carolina really took over hitting today,” Kinlen said. “Any time we are out of system like today, they know to send the ball to her. Saatiya played well because we’ve been practicing a lot of our system, if the setter gets the first ball, who goes for the second? We’ve really been drilling Saatiya getting out there and taking that second ball and she did that phenomenally today.”

Angel and Naik have the most experience on the team and Ferraro saw some action last year. Otherwise, it’s a fresh lineup.

“Last year and two years ago it was the same group of people and with our old coach we weren’t really clicking,” Angel said. “Kelli coming up really helped us click to have a coach that’s giving us more structure. Kelli is the reason we’ve changed.

“I think we’re all doing a good job playing as a team, being able to see the ball in the court, what’s going on and being ahead of the ball. Usually with my club team that’s how we are, but here the last couple of years we’ve been that one step behind.”

Building on the win and not taking any steps backward is what the Panthers are now focused on.

“I hope they start playing more like a team right off the bat instead of saying, ‘I’m not used to playing next to this person, let’s see if she goes for the ball,’” Kinlen said. “It’s getting out there and saying, ‘OK, I’m out there, it’s my ball.’ They have a little hesitation because they’re not used to playing next to each other, so I want to build them as individual players with individual confidence so that no matter who you are, who you’re next to, whose gym you’re in, you know that when you’re out there you’re confident and you got this.”

In preseason the team focused on not letting the ball drop and what Kinlen has seen is a team that “embodies” that.

“Even though sometimes they’re diving all over the court to get that touch, even if the ball doesn’t go over I can’t ask for anything more than them going for it,” she said. “That wasn’t happening at the beginning of preseason. And they’re starting to talk more. It looks like a well-oiled machine, like a team that’s been playing together for a while. We can only build on that.”

Edgemont was a bit disappointed in a tight 3-0 loss to North Salem on Sept. 18, falling 25-22, 25-20, 25-21. Angel had 12 kills while Ferraro added four aces. Rebounding to beat Pleasantville was even more crucial following this loss.

“They were a really good team,” Angel said. “In each set we got close and we were battling back and forth and scored in the 20s. They outhustled us a little bit on a Saturday morning. We really weren’t ready for that.”

After topping Pleasantville, the Panthers feel like they are ready for anything.