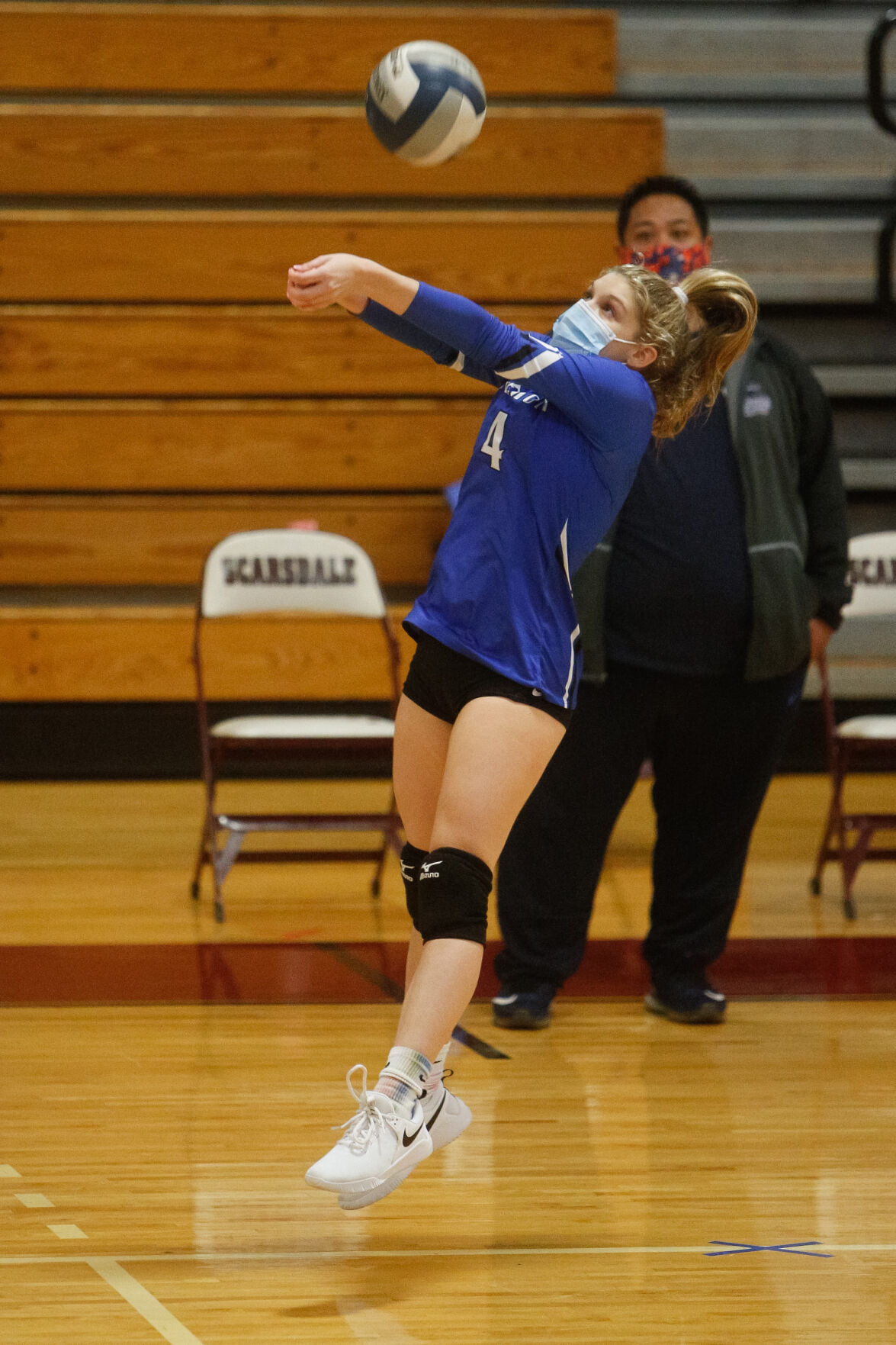 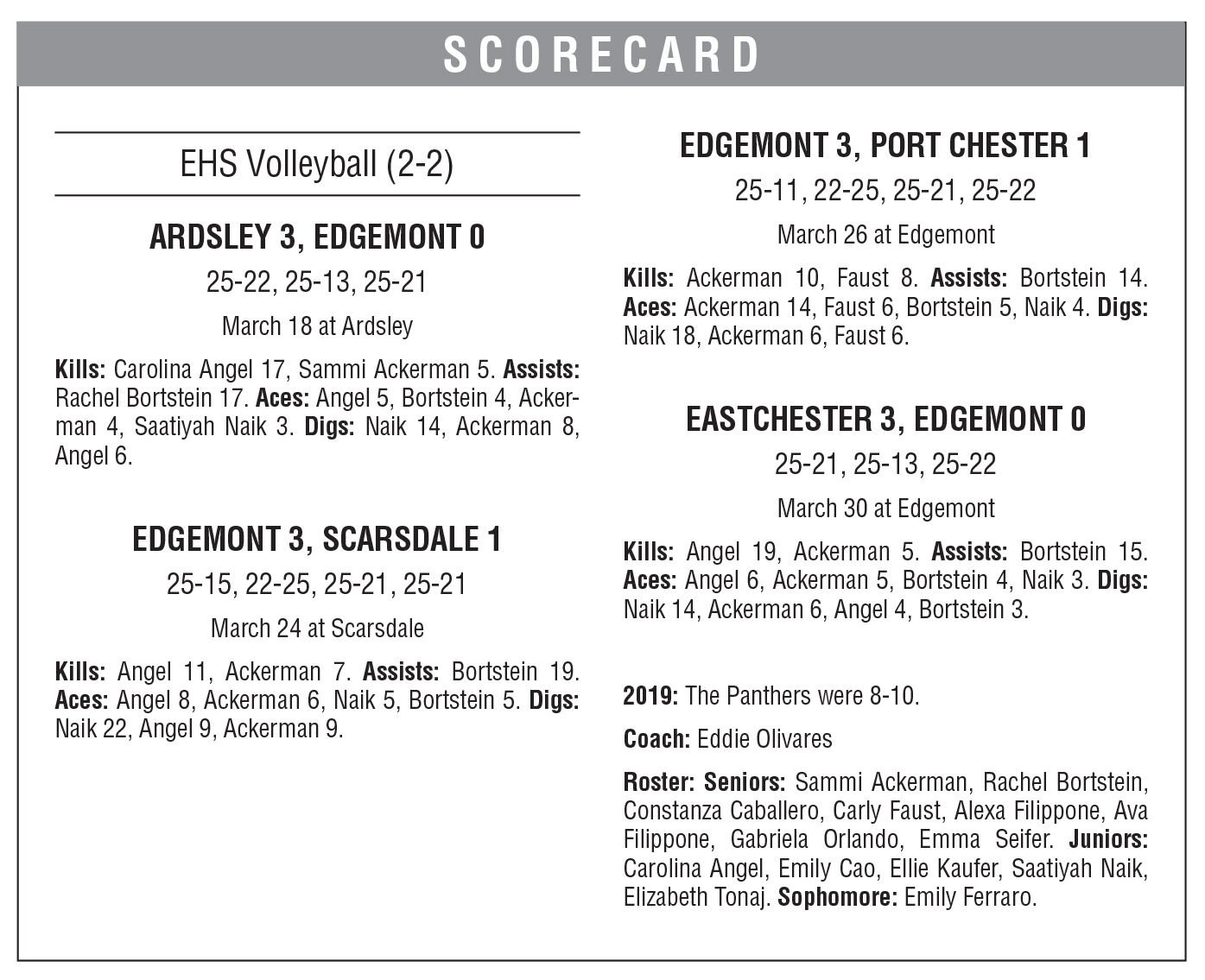 Eddie Olivares is having flashbacks of 2017, when his now core senior class on varsity of Sammi Ackerman, Rachel Bortstein, Carly Faust and Emma Seifer was the driving force on his junior varsity team.

The team’s other two starters are juniors, big hitter Carolina Angel and libero Saatiyah Naik, while senior Alexa Filippone has upped her game and her playing time this season.

Following a close loss to Ardsley and an unexpected win over Scarsdale in the first two matches, Angel, Olivares’ “offensive thoroughbred,” wasn’t available to play against Port Chester and the rest of the team stepped up to secure the win. Faust moved to outside hitter, where she used to play, and Emily Ferraro, usually the backup setter to Bortstein, played defense.

“They picked up the roles quite well,” Olivares said. “There were a couple of hiccups because it’s not their original roles, and that contributes to the score, but once again we were proud to get the win.”

Bortstein was the setter, Ackerman the outside hitter, Seifer the middle and Faust was wherever Olivares needed her at the moment. Filippone had a big day, too.

“In the offseason she did extra work, she played club, travel ball, and has easily made an impact in her senior season, which is very impressive,” Olivares said. “She put in the work knowing it was going to be on her shoulders to step up. Middle was something we were lacking last year because we’re short. She happens to be decently taller, but long arms. That gives us something we haven’t had in past years.”

Bortstein spent the beginning of the season getting used to new teammates and where they like the ball set to, but her main targets are Angel, Ackerman and Faust. Still, she never knows when the lineup might change for any reason, so being prepared is her top priority.

Bortstein has to make quick decisions based on what she sees out of the corners of her eyes and who is in position.

“Everyone is bonding more, creating better friendships and trusting each other,” Bortstein said. “In this game it’s literally all about trust. It’s, ‘You, you, you,’ or, ‘Me, me, me,’ depending on who should get the ball …

“There’s a lot of newcomers so it’s getting them comfortable and figuring out where they like the ball. Everybody has their own thing and likes different spots on the court, so it’s adjusting and being able to adapt to everybody.”

Ackerman plays all the way around, which she enjoys, and has been stepping up as the team’s second best hitter with 27 kills to Angel’s 47. She likes Bortstein playing setter as the two have also been basketball teammates for years.

“We know how we each play and we work really well together,” Ackerman said. “She knows where I want the ball and I know where to pass the ball to her. It’s a connection we’ve built throughout the years.”

Faust was ready to go from right side to outside in Angel’s absence in part because of her own bond with Bortstein.

“Ardsley was a good one for us actually, a good one for us to wake up, to show us where we need to be leaguewise to compete,” Olivares said. “Luckily we showed up that day. They didn’t blow us out of the gym. It was a respectable performance and they had to keep their starters in against us and a year and a half ago they were finalists. For a small school like Edgemont to go in there and they had to keep their starters in, their club players, their best, for us to go against them I didn’t walk out of that gym feeling bad. It was a tough outing for the first day of the year. I was proud of them.”

Beating Class AA Scarsdale in the next match showed Edgemont that it can compete with any team. “They were very excited, very happy,” Olivares said. “They realized they still have what it takes.”

In the 3-1 win, Olivares tried to incorporate as many of the younger players as he could to get them used to the speed of varsity. “And you can see the difference in a shortened season that it’s not that easy to adapt quickly,” he said. “Some of them haven’t been on a court in a long time. Having this opportunity now, they’re going to look great next year with a regular preseason and season.”

With such a strong core of seniors the Panthers have high expectations.

“This is that core lineup we’ve built, so they really needed to have a season,” Olivares said. “Every win to them really means a lot.”

Bortstein said the goal is “to just keep winning and hopeful that we close down. We want to have fun and keep playing for one last year.”

Ackerman sees the improvement and the energy early on, especially after going into Ardsley and making a statement. “I think in the first match we didn’t really know our cheers yet and we were really low energy, but I think once we started playing Scarsdale and then this game against Port Chester our energy has been much better,” she said. “I think from today we can learn not to play down when we play teams and take it point by point. I think that’s really important. We want to build off the two wins.”

Olivares is preparing the team for postseason, where anything can happen. “If we’re polished by then it doesn’t matter who is on the other side of the net,” he said. “I really feel that. The future looks good. Edgemont has created a different program and I’ve got to admit it looks good.”