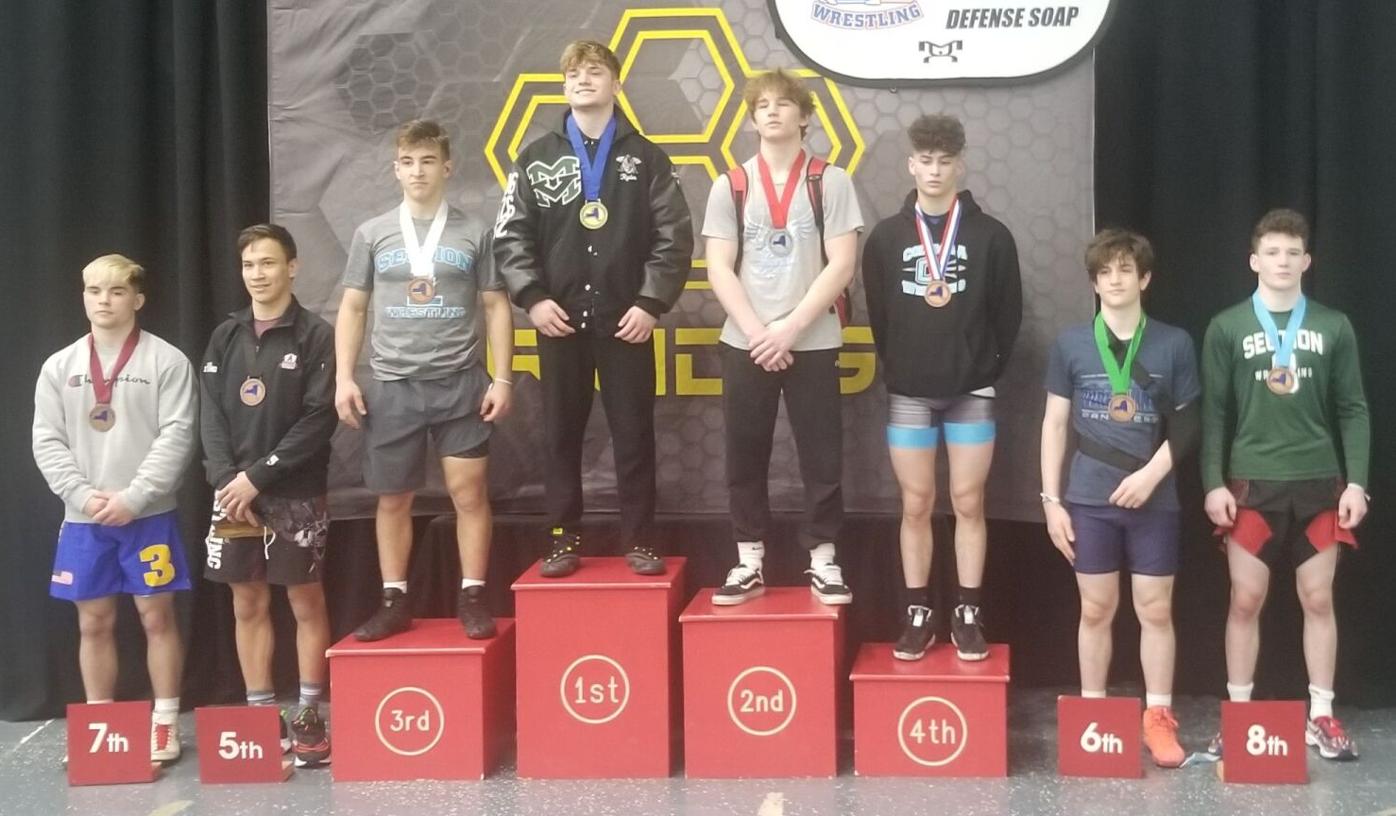 Noah Bernstein had to injury default after the semifinals. He took sixth place at 152 pounds. 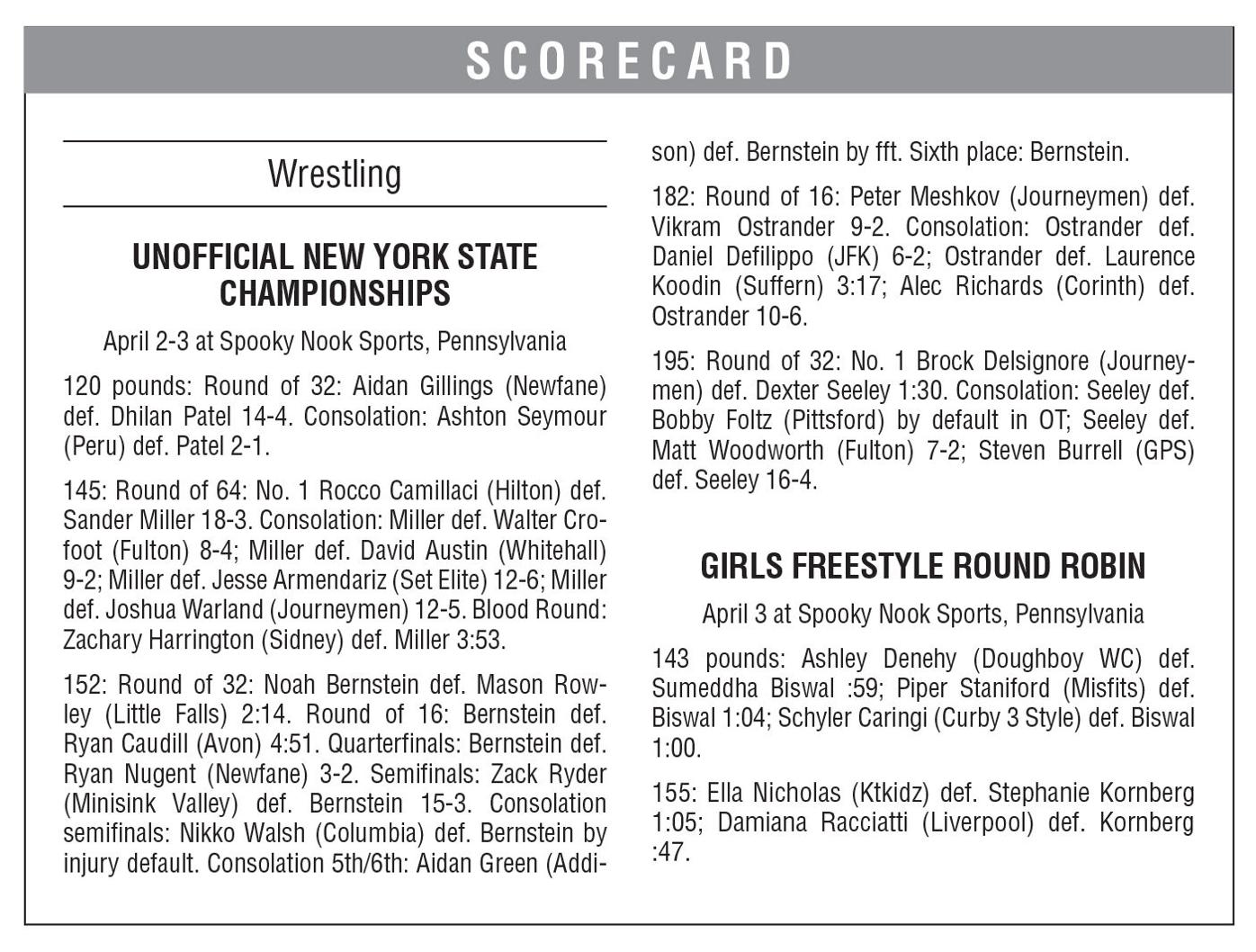 The New York wrestling community is thankful for looser COVID-19 rules in Pennsylvania, which was the site of the privately run, not NYSPHSAA-affiliated unofficial state championships last weekend.

Planned prior to New York’s plans and rules for the high-risk winter sport were finalized, the event featured strict qualifications, larger brackets, a combination of large and small schools competitors, club wrestlers who were not permitted to have a high school season, and relaxed local rules on masking and quarantines.

“I think everyone in the state used this as the equivalent or more than a New York State Championship because you have Division 1 and Division 2 kids wrestling together,” Edgemont coach Pete Jacobson said. “There’s always that kind of lingering conversation after regular states of who would be the ‘real’ state champion if it was a combined tournament. Up until 2004 it was a combined tournament and in 2004 they split into two divisions in New York.

“The cool thing is they had the opportunity to contest that and you had a lot of schools who maybe didn’t run wrestling this winter, but the truth is all of these high level state-caliber kids for the most part were still wrestling at outside clubs, so they were ready to go and wrestling in this tournament regardless of whether or not their school had a season.”

Edgemont Wrestling Club qualified five competitors who made the Section 1 Division 2 finals last winter for the main event, while there were also freestyle tournaments that followed for both boys and girls.

Jacobson said for Bernstein, Miller and Seeley it was “the best tournament of their life,” noting that the other wrestlers “wrestled hard, wrestled well.”

Seeley and Kornberg would not have been able to attend if it were held in New York due to a 10-day football quarantine, but since Pennsylvania follows the CDC’s seven-day quarantine with a negative test, they were able to hop over the border to compete.

Bernstein was Edgemont’s lone place finisher. He made the semifinals and while he could have taken as high as third, he injury defaulted his final two matches after losing in the semis due to a collarbone injury. He placed sixth overall at 152 pounds.

“He really wrestled a great tournament, the best of his life,” coach Pete Jacobson said. “Out of all of the weight classes in the entire tournament, there were only three unseeded wrestlers who made it to the semifinals and he was one of them. That was a huge validation and feather in his cap. And he pinned his way there. He really demonstrated to himself and everyone else that he’s an All-State caliber wrestler this weekend.”

Seeley at 195 pounds and Miller at 145 both drew the No. 1 seed in the opening round. Miller, who was a Section 1 champion last year, was able to wrestle all the way back to the blood round, which had he won there would have guaranteed him a top 8 finish. He wasn’t able to win that match, but had won four straight matches to wrestle his way back to that point. Jacobson was highly impressed with the effort and poise Miller showed.

Seeley won his first two consolation matches before being knocked out of the tournament by “another All-State caliber kid,” according to Jacobson.

“That was great for him,” Jacobson said. “I think it was a very validating way for him to finish his high school career. Dex at this point doesn’t have plans to wrestle in college, so he went into this kind of like the last wrestling tournament of his career potentially. He felt last year like he had a very good chance to win the section this year and do well in the state tournament. He was just hopeful to get this opportunity and it looked like for a few days there he wasn’t going to get this opportunity.”

Ostrander, who will wrestle for the University of Virginia next year, was also 2-2 in the tournament. Ostrander will compete at senior nationals in Virginia Beach in a month, and has a few weeks to learn from this tournament and prepare.

“While Vikram really had his eye on winning the section this year and doing well in the state, he was also able to look at this like another stepping stone to help him get prepared to move on to bigger and better things,” Jacobson said. “He definitely wrestled hard. He did some things well, he did some things he can definitely do better, but I think he got maybe not what he wanted out of the tournament from an outcome perspective, but as his coach I think he got what he needed out of the tournament as far as giving himself a measuring stick against other high level guys.”

Patel was 0-2, but his second match was a tight 2-1 defeat. Jacobson said Patel will take away positive things from the experience.

For seniors Seeley, Ostrander and Biswal it was a final high school farewell. It was Biswal’s final reward for the hard work she put in that wasn’t always rewarded over the years due to lack of opportunity to wrestle compared to some of her teammates. Last winter the Panthers did add the first-ever Section 1 girls bracket to their home tournament, something they couldn’t do this winter with COVID-19.

“I think it was bittersweet,” Jacobson said. “She’s talked about wanting to wrestle in the club level in college and she’s really worked so hard and gotten a lot better. The flip side, this was her first time wrestling freestyle, which is what the women do in college, and there is a little bit of a tactical adjustment you have to make. She went out hard, she represented herself well and I think it was a good way to end her high school wrestling career.”

For the juniors, of which there is a large class at Edgemont returning next year, there are more great things to come, some things this year’s senior class of eight that also featured Greg Florio, Daniel Hahn, Mitchell Kronk, Fernando Lens and Matt McCormack, didn’t have the chance to experience or achieve.

“Sander, Dhilan and Noah are all juniors and they’re all in a great position to really have great success next year, and Steph is part of that really strong junior class,” Jacobson said. “A lot has to happen between now and then for them to reach their ultimate goals in high school, but they’ve put themselves in a position to accomplish it if they put in the time and the effort.”

Jacobson was thrilled to have had a high school season and packed in as many multi-meets and dual meets as he could to get his wrestlers of all levels as many matches as possible. Capping it off for seven wrestlers last weekend on a high note was another positive.

“I think it was a great experience and it was a very well-run event,” Jacobson said. “We’re so fortunate that we got this opportunity this season and we got some version of a postseason, some version of a state tournament. I’m so happy our seniors were able to capitalize on those opportunities. They really went above and beyond this year being great leaders during a very hard 12 months to do that.”