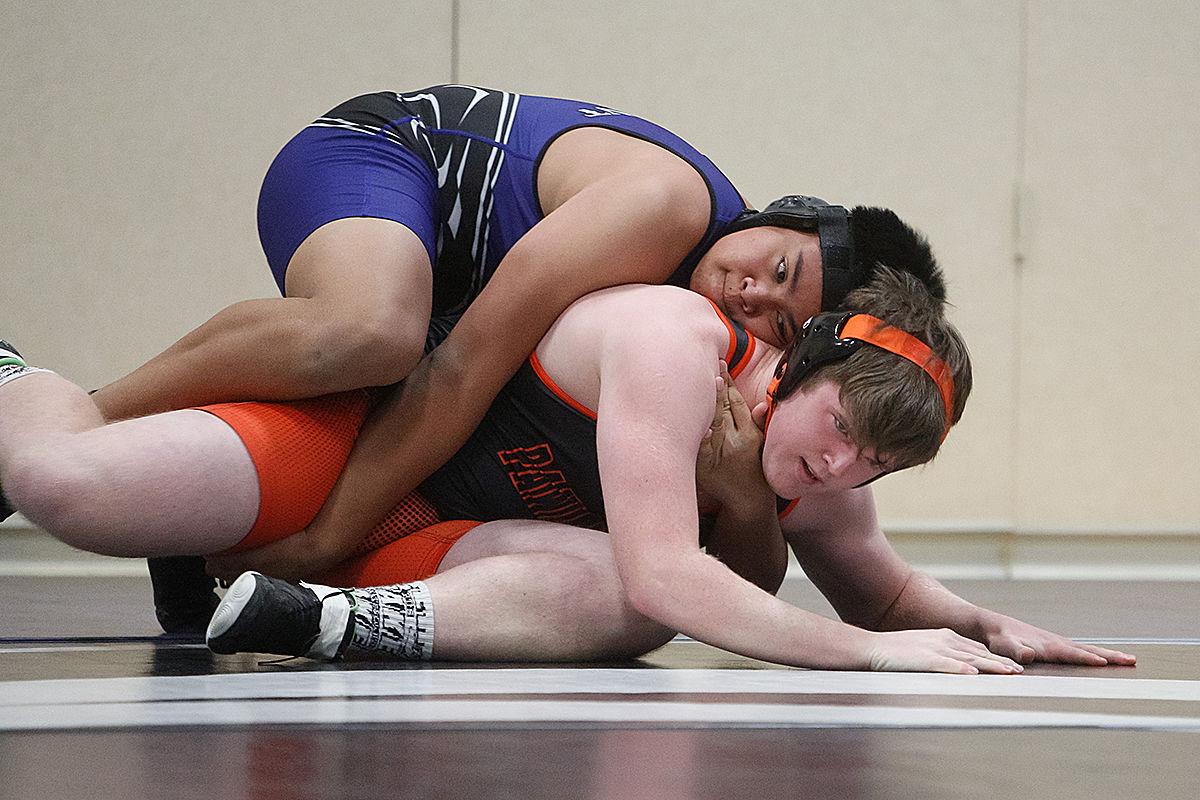 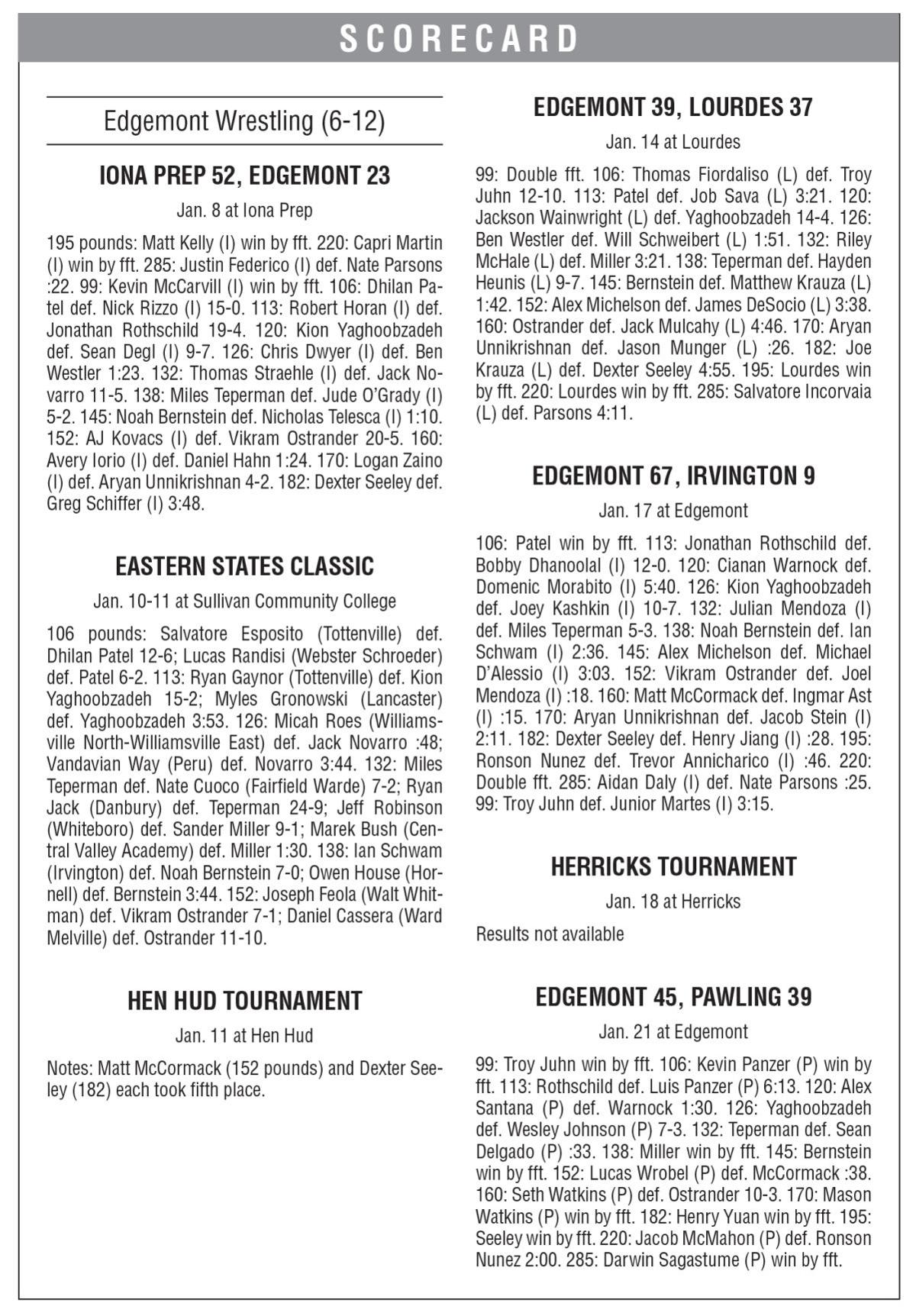 When then-senior Mikey Schwartz’s father died of cancer a week prior to the 2016-17 season, Edgemont wrestling coach Peter Jacobson racked his brain to find a way to use wrestling to help Schwartz through a difficult time in his life. Little did Jacobson know a tradition would soon be born.

For the last four Januarys, Edgemont has hosted Irvington in a Friday night match to benefit the American Cancer Society.

“It seemed like a good, fitting way to be there for Mike and to show support,” Jacobson said. “It was a great night against Irvington. They wanted to be a part of it to both pack the gym with our fans on a Friday night. The donation every year is from Edgemont and Irvington.”

Some of this year’s seniors were on the team when Robert Schwartz died.

“When his dad passed away it was in the beginning of the season and I was a freshman, so I didn’t know Mike that well,” senior Jack Novarro said. “But I remember how most of the team went to the funeral and just focused on making sure he was alright.

“I think wrestling was a place for him to take his mind off things. Mike was always the happiest guy in the room.”

Last Friday, the tradition of the Edgemont-Irvington match continued. “I think it’s really awesome that we get to have this event every year and that will continue after I’m gone,” Novarro said. “The match is always a great event for the community and a building block for our program.”

It was just another part of the program’s longstanding commitment to at least one community service event each year.

“It’s a nice way to reinforce the connection in the program between our alumni and our current wrestlers,” Jacobson said. “That is something we’ve really tried to emphasize because when I wrestled at Edgemont and before that it’s safe to say there wasn’t a family atmosphere in the program, that there wasn’t a strong wrestling culture in our school.”

Edgemont had built its program around community involvement. Keeping former wrestlers in the mix by inviting them to practices, having them volunteer as assistant coaches and having events throughout the year, notably the barbecue in June, has helped Edgemont build a strong network. Jacobson, after all, came through the program, having graduated in 1996 and later assistant coaching with his former coach, George DiChiara.

“One of the things that has contributed heavily to our program is the caring and involvement of our alumni,” Jacobson said. “It’s great for so many reasons. We constantly have alumni coming back from all different years. There were some guys from 1987 today and more recent guys like Georgie Guarnieri and Chris Eppolito and a few other guys I saw.

“It creates a stronger culture, more of a family atmosphere. For our wrestlers to know in a very palpable way that they are standing on the shoulders of those who came before them, that they are watching and what they do matters because they are representing a greater mass of people than themselves. That’s been transformational more than anything else.

The event raised more than $700. “It always gets me to see the generosity,” Jacobson said. “Today, the faculty of Edgemont High School, completely on their own, decided they would raise money as a group for this. And that’s amazing.”

Though Edgemont thoroughly dominated the match to the tune of a 67-9 final score, there was one match in particular that stood out. In addition to the motivation provided by wrestling in memory of Robert Schwartz, Noah Bernstein was facing Ian Schwam for the third time this season at 138 pounds. Schwam not only held a 2-0 lead in the season series, but he broke Bernstein’s nose the last time they met.

“For Noah to come out now and pin him, that was huge,” Jacobson said. “It was really a testament of not letting the situation take your off your game or distract you from whatever you are trying to accomplish. It’s the most prime example of kids maintaining their focus.”

Additionally, Schwam came through Edgemont’s youth program, as Edgemont takes kids from all over. Schwam’s mom went to Edgemont and his stepfather not only wrestled for Edgemont, but was Jacobson’s babysitter.

This was not the first time sophomore Bernstein had a breakout day. At the Shoreline Classic, Bernstein pulled off two upsets against top four wrestlers to place third.

Facing Schwam with additional protection over his face to protect his nose wasn’t easy for Bernstein, but he persevered once again.

“With the mask it feels pretty cool, but at first it was slipping around a lot,” he said. “After I changed my headgear it felt pretty good. I didn’t let it distract me. I feel like these kinds of things will make me a better wrestler. Once my nose is healed and I take off the mask I’ll be more aware.”

The packed house and the charitable component also played into the emotion of the victory.

“It’s a really special thing when we can get a large crowd,” Bernstein said. “It not only supports Edgemont wrestling, but it spreads awareness about something much bigger than our team. Events like this really gets our team excited. A lot of Edgemont pride comes out of it, along with money for a good cause.”

Edgemont won 10 matches by pin, including five in under a minute. The Panthers were extremely celebratory in their reaction to the wins, perhaps motivated by the atmosphere of the event.

“This sport is so physical and personal, so there’s such a mental component to it and you really have to get to a point where every match is the same,” Jacobson said. “I am all about guys being happy when they win, upset when they lose, but one thing I think that our team — and probably every team — could stand to work on a little more is treating every match the same, at least in your preparation. Maybe not in your celebration.”

Often Jacobson has seen wrestlers underperform in unusual circumstances, but Friday was not one of those days. “Both our younger guys and our older guys, you really didn’t see that tonight,” he said.

The regular season is starting to wind down. Edgemont has its tournament this weekend and mid-February will be sectionals.

“Especially since sectionals are coming up, Pete makes it clear we can’t start dying down,” Bernstein said. “We have to increase what we know and really dial in on the things we have to work on, the things we’re good at. We’re going to work harder and work even better to get past teams that have had the edge on us.”