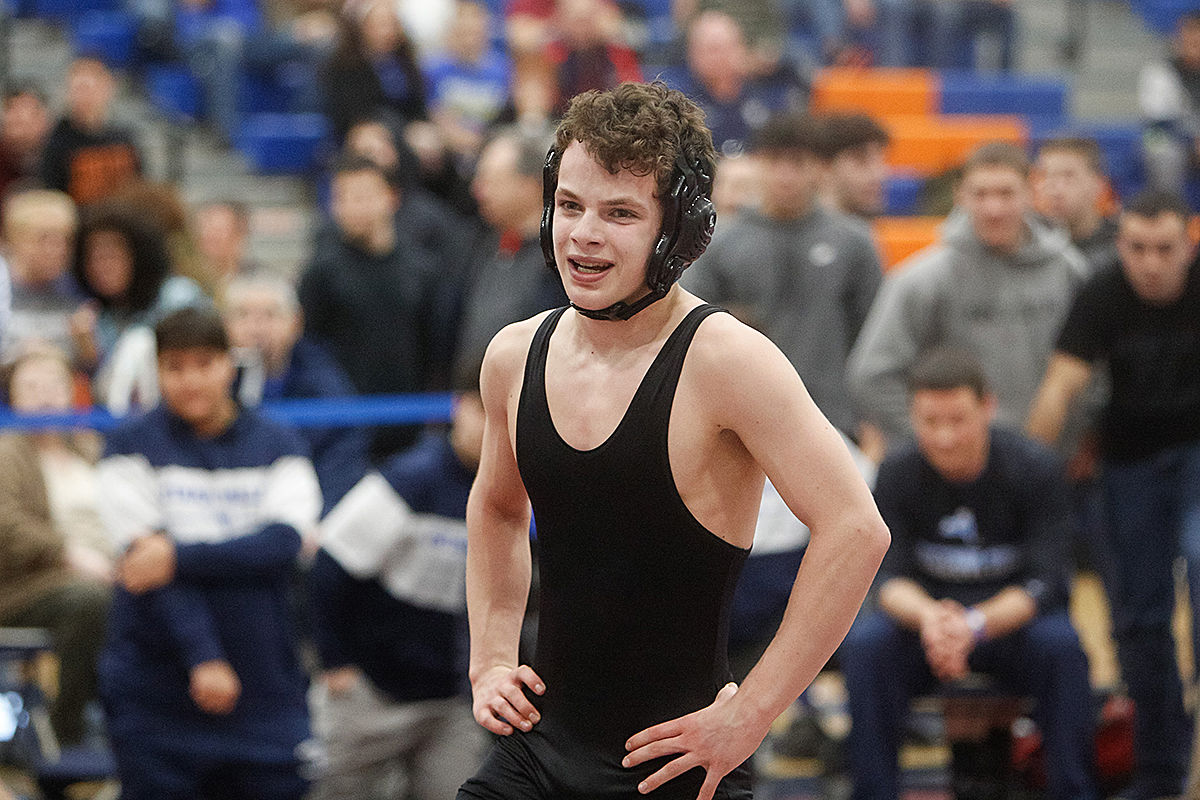 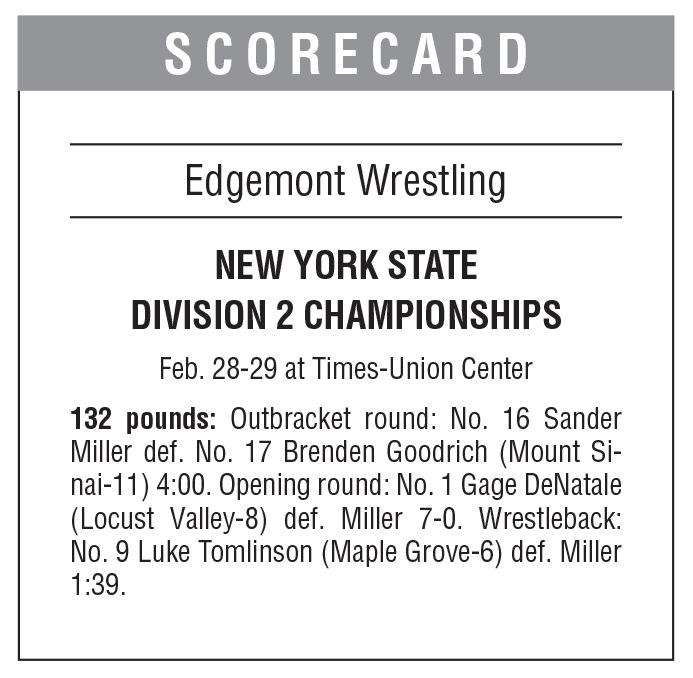 Going from wrestling in high school and college gyms to the Times Union Center in Albany can be a daunting task for a young wrestler. Trading in bleachers for an arena is like jumping from Little League to the Major Leagues overnight.

Edgemont sophomore Sander Miller handled it like a pro. The Section 1 Division 2 132-pound champion was able to get down to business and compete well in his three matches on the first day of the tournament last Friday.

“It was a pretty intense atmosphere, probably the most nerve-wracking — not pressure — but the most intense it’s ever been for me,” Miller said. “It was a pretty good experience for next year when I go up.”

“He was super impressive,” Jacobson said. “He walked out of that tournament knowing he can hang with these guys and he wrestled the best kid in the state and held him to a decision.

“We talk about those things all the time, but when you come out with something tangible that he can hang with a kid like that, it develops a level of intrinsic motivation. The goals are now a lot more realistic and you can see more clearly the path to where you are to where you want to be.”

With 17 wrestlers at each weight class there was one 16 vs. 17 match to get into the main draw, with the winner facing the No. 1 seed in the official opening round. Miller drew No. 16 and despite being down 5-0 in the second period won his match with a pin at the end of that period to advance. Prior to the pin, Miller battled back and the score was tied 7-7 when the official slapped the mat for the pin.

“The first match I was losing at first, but I was pretty confident I could win throughout,” Miller said. “I could feel there were certain times and certain positions I could take advantage of in the match.”

Miller could have folded like many wrestlers would have done in that same spot. Jacobson saw his sophomore’s resilience shine through.

“It’s easy to let those negative thoughts impact your performance and you don’t often see at that level of wrestling people coming back from a 5-0 deficit,” Jacobson said. “He scored seven points in the period, which is pretty impressive. More than anything it speaks to his mindset and his mentality. He really had the confidence to keep wrestling hard.”

Miller was again unfazed in his next match against eventual champion Gage DeNatale of Locust Valley from Section 8. Miller lost 7-0, but got the moral victory by not getting majored, which would have been a loss with a gap of eight points or more.

“It was pretty intense,” Miller said. “He had me down 5-0 halfway through the second period and I was really committed to not letting him major me, I wanted to win, but I also wanted to hold him off as much as I could. That motivated me to keep fighting, either off my back or any position.”

The key for Miller in avoiding getting scored on again were being calm and aggressive.

“It was nice to wrestle the one seed,” Miller said. “He won the whole thing, so I really got to compare myself to one of the best wrestlers in New York State. It really maximized how much I could learn from a match whether I won or lost.”

That was the match in the tournament that showed Miller he belonged in Albany.

“One of his advantages is he has a strong and positive mindset,” Jacobson said. “There’s no way you step into that arena and compete for the first time and there’s not nerves or anxiety. You’re wrestling literally in an arena with a lot of distractions. That said, I think he handled it as well or better than any first-year underclassman qualifier we’ve taken there.”

By wrestling hard the entire match, even with a loss looming, Jacobson felt Miller continued to approach the match maturely. “That’s how you walk away win or lose with no regrets,” Jacobson said.

Jacobson said Miller almost put DeNatale on his back twice because of Miller’s own unorthodox style in which he thrives on being put in and putting opponents in weird positions, particularly when he’s on top.

“It causes guys to react in unexpected ways,” Jacobson said. “As those reactions become more expected to him I think he will dramatically improve his results, which have already been pretty good.”

Miller doesn’t always see the advantages he creates for himself in time to capitalize, but his ability to confuse and frustrate his opponents is a good sign that he’s heading in the right direction.

Miller called it his “skill in funky and unique positions.”

“It came a little naturally at first, so I worked on it a lot,” he said. “I enjoy being in strange positions that I have to fight for to score. I like learning new moves and crazy moves a lot. I would try those out sometimes either before practice or with a friend. A lot of moves really stuck and I’d incorporate that into my wrestling.”

The lone regret for Miller was getting pinned in the wrestleback in 1:39, which signaled the end of the double-elimination tournament for him.

“That was a tough one,” Miller said. “On paper he wasn’t as good as the first seed, but he was very aggressive and I guess I should have come out more aggressive in that match, too. He pinned me and there’s a lot of things I could have done better in that match.”

The lack of experience to recognize opportunities showed most in his final match.

The takeaways for Miller were the important part of the tournament. He knows many of the wrestlers will return next year and that he needs to improve more than they do in order to advance further and place or win the tournament.

“I’ll use the offseason to mainly do what I’ve been doing, to get better, maybe start learning more moves and refining old ones,” Miller said. “And building my strength, too.”

Edgemont has had three state champions — Trey Aslanian (2013), Clifton Lee (2017) and Nicky Meglino (2019) — who all won as seniors. For most of Edgemont’s qualifiers and eventual All-State wrestlers, it was a building process getting better at the tournament each year, which is the benefit of getting there at a young age.

Jacobson isn’t big on labeling anyone as having “potential.” Everyone has potential in his mind to reach some level of success. It’s those who work toward that who are the ones that can hold their heads high no matter the outcome.

“It doesn’t mean a whole heck of a lot if the kids don’t choose the path that enables them to realize that potential,” Jacobson said. “I don’t like to get caught up a lot in a kid’s potential, but that said Sander has to this point shown a willingness to put in the time and effort toward striving to meet that potential. If that continues he’s in a position where he can make an impact at the state level in the coming years.”

Miller has been in Edgemont’s program for three years now. He moved from Cold Spring/Haldane and wrestled modified as an eighth-grader, varsity the last two years. The growth he’s shown comes from his alignment of the principles of the Edgemont program, which includes goal-setting, challenging himself, putting forth a plan to reach his goals and believing in the process that is based on hard work. The confidence he has is a bonus factor.

“This is one of the only times I can remember that I’ve coached at states — and I’ve been fortunate to have coached a handful at this point — where a kid was eliminated from the tournament and I’m more excited for what’s in store for him than I am upset about what just happened,” Jacobson said.