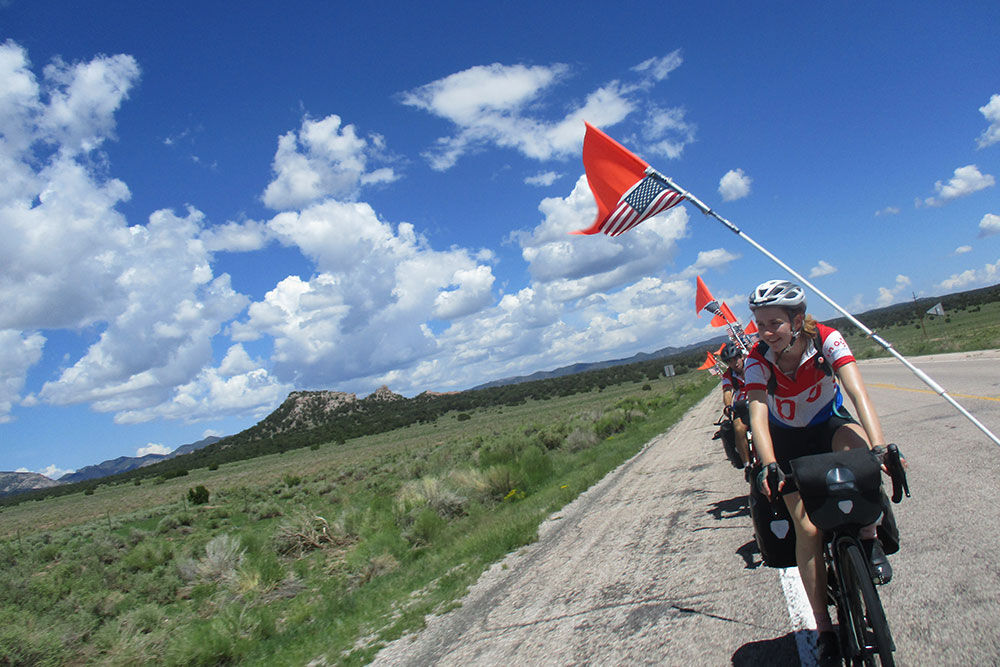 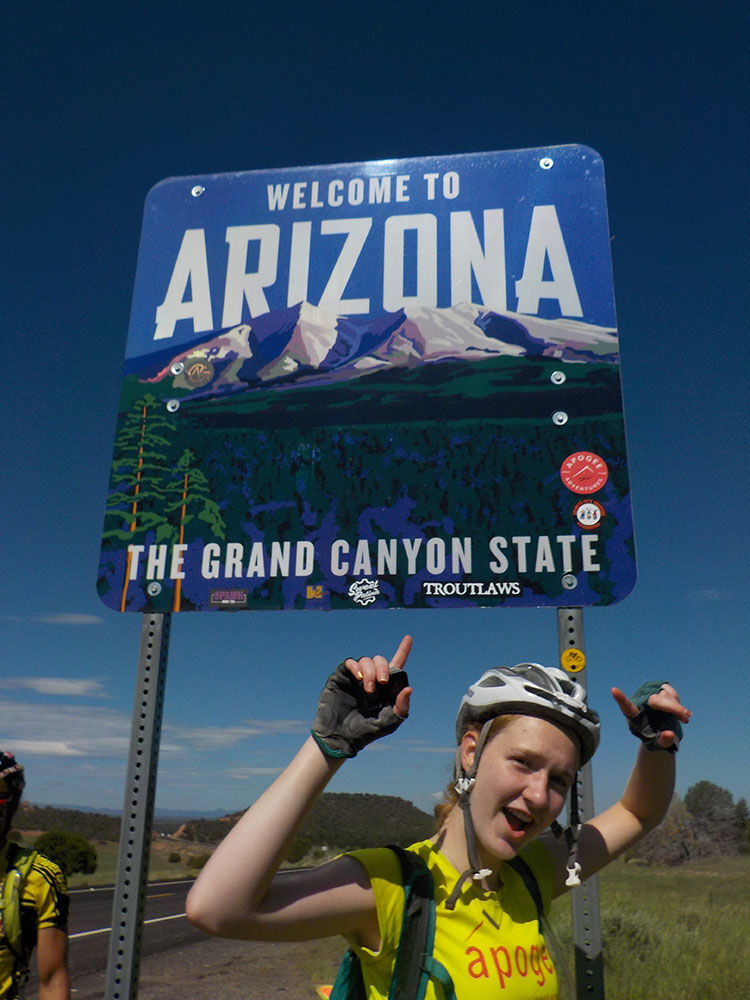 The bike tour took Hurshman through many scenic spots along the way. 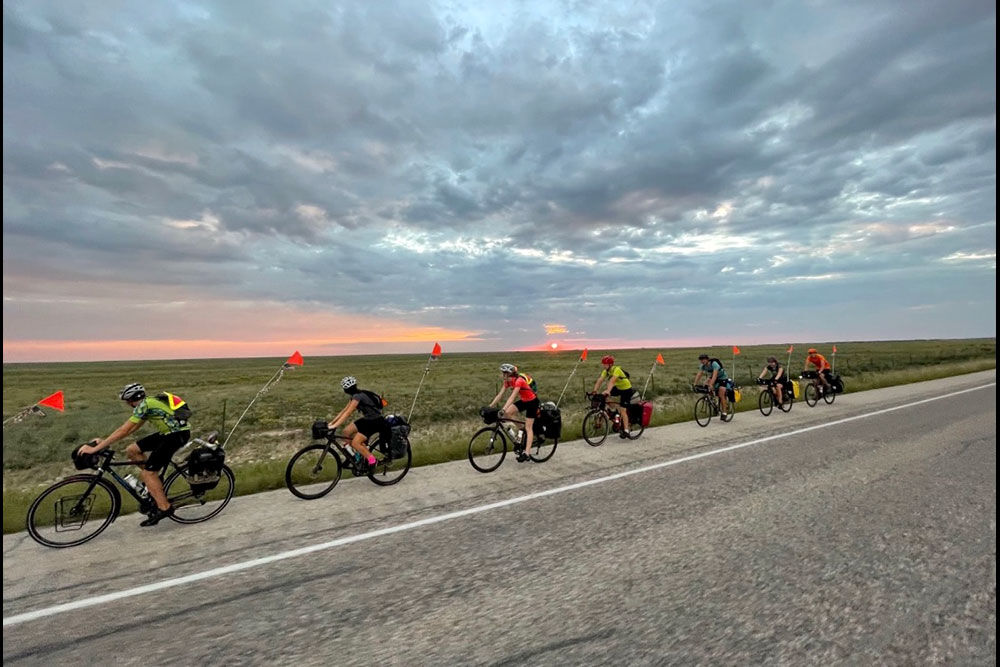 After nearly a year and a half of the COVID-19 pandemic throwing the end of her sophomore year and much of her junior year at Scarsdale High School in a tizzy, Lizzie Hurshman decided that an adventure was just what she needed to break the cycle. Twenty-six hundred cross-country miles later, Hurshman found new perspective on two wheels.

The bicycle tour that began at Folly Beach, South Carolina, on June 30, and ended in San Diego, California, on Aug. 9, was rigorous, challenging and rewarding for the rising SHS senior whose athletic career mostly involved running distance and middle distance for the Raiders.

Hurshman had previously done two shorter bike tours through Apogee Adventures. This was the big ride. “I wanted to do this one for a while because it seemed really cool and after a year of COVID where we couldn’t really do too much I was seeking an adventure where I could see a lot of the country,” Hurshman said.

Hurshman and the other 11 teens and two tour leaders set out early each morning — 4 a.m. — to beat the heat. They often rode 20-mile segments before stopping to rest and averaged about 85 miles over eight hours daily until noon or 1 p.m. before they would stop for good at a church or community center to relax, take a nap, make some dinner and be in bed by 8:30 or 9 p.m. in order to be well-rested for a pre-sunrise departure the next day.

Each bike was equipped with a pannier, in which riders stored their sleeping bags, a couple of changes of clothes, sunscreen and cooking equipment. Sometimes they even had to lug several days’ worth of food.

“It teaches you how to live simply,” Hurshman said. “It teaches you [what] you don’t need. You have the bare necessities since you have to carry it yourself. It was weird because around us in New York everything is really populated. There would be times we were staying somewhere and there wouldn’t be a grocery store there. We had to carry our food for two or three days.”

The ride itself was more difficult than Hurshman expected due to headwinds and some more hilly terrain out West than she was aware of, but she relied on her fitness from the 30 miles of weekly training for cross-country, the 2,000-meter steeplechase and the 800-meter for high school, and once the spring season ended she spent time on her bike getting ready, doing rides of 30 and 40 miles on the North County Trail.

“There was a really bad headwind in Mississippi and a lot of the plains and when you’re out there for really long hours on the bike you couldn’t really talk to anyone because it was so strong,” Hurshman said. “You’re going slow because you just can’t move that fast. Mentally it’s tough to get through that because it felt like it was never going to end. Some of the stretches we didn’t know how long they were going to be and when we turned a corner we just had to keep on going for a really long time.”

The hills were just as grueling. “Originally I was told it was going to be pretty flat, which it was in the beginning, a lot of cornfields and stuff in Alabama and Mississippi, but once we got past Texas into New Mexico and we hit the Rocky Mountains it was very hilly,” Hurshman said. “We also hit the Sierra Nevadas from New Mexico into California, so that was pretty hilly. We went through the Mojave Desert and that was also pretty mountainous there, too.”

Among her favorite locations along the route were the Mississippi River; Roswell in New Mexico; Phoenix, Arizona; and the Rocky Mountains. “Every single morning we were riding before the sun had risen, so you were looking back and seeing the sun rise, which was really neat,” she said. “One time we stopped and I was never able to see the horizon with all four corners. It was just so flat, no buildings. You could see for miles.”

Hurshman was definitely in shape for the ride, but it was a different type of endurance going from running for 40 minutes to biking for eight hours. She’s more interested in seeing how the biking impacts her running as she returned to the cross-country team this week for preseason.

“I’m really excited because it’s the last time I’ll be running in high school,” Hurshman said. “As a freshman for cross-country I had a really good experience because the upperclassmen were very welcoming and we had a good team dynamic. I’m excited to be able to help cultivate that because I see how important that is. I want to use my fitness from cross-country in the winter and then have a really good final spring season.”

Hurshman used the “pack mentality” from cross-country and it translated well for the epic ride across the United States.

“We were a very determined group,” Hurshman said. “If I was doing this alone I think it would have been a lot tougher. We really relied on each other. Someone would be struggling on a hill or if it was a tough day and you were low on energy, everyone would start hyping each other up. I learned that if I put my mind to something and I’m really determined to do it, that it’s possible. It helped breaking it up by day. If I look at the map now I think it’s really crazy I did it.”