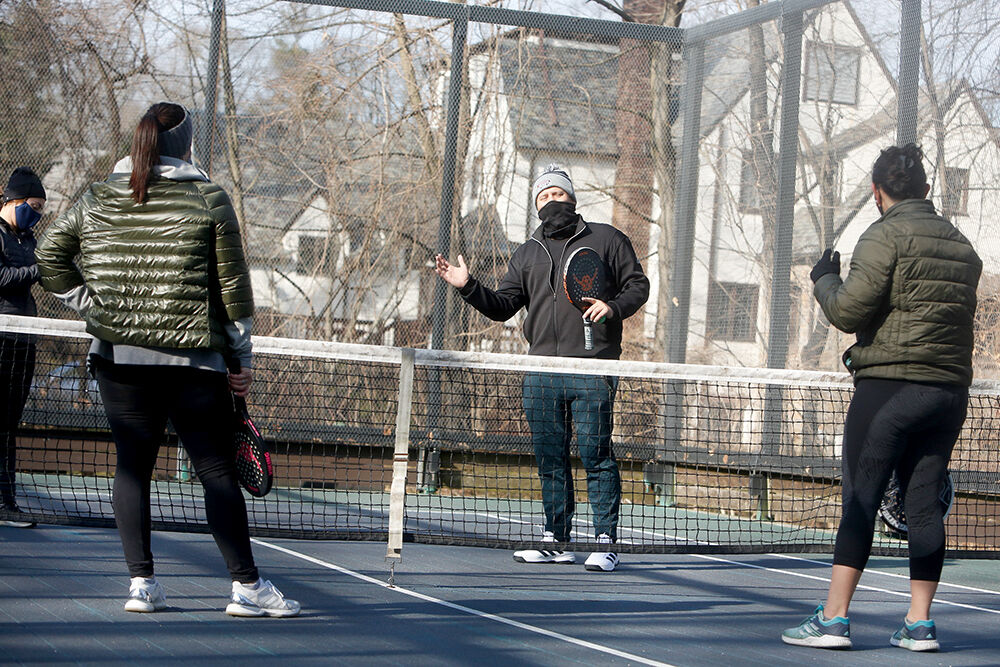 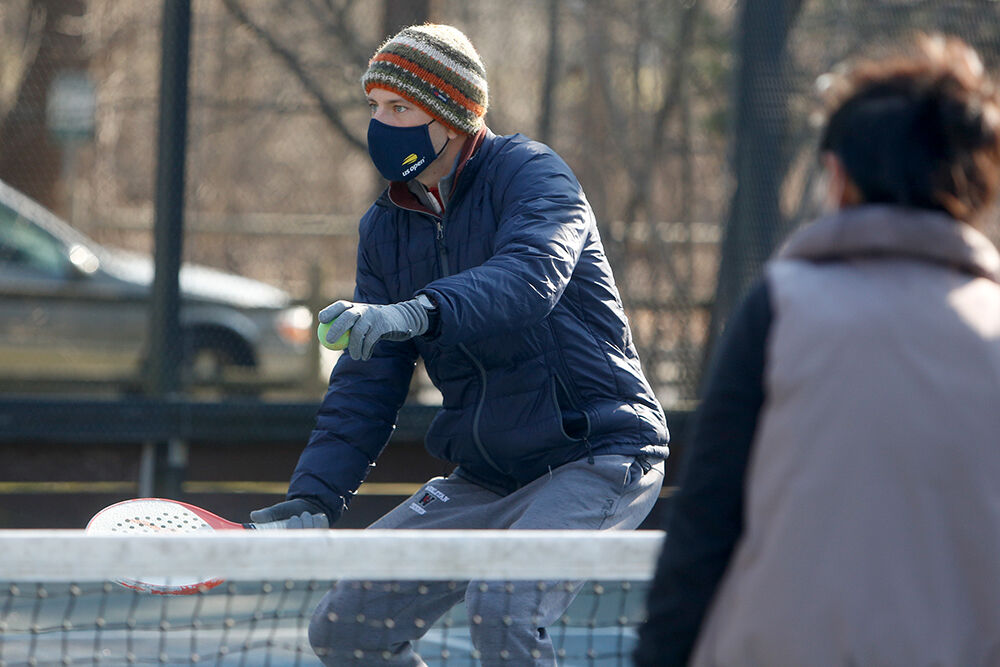 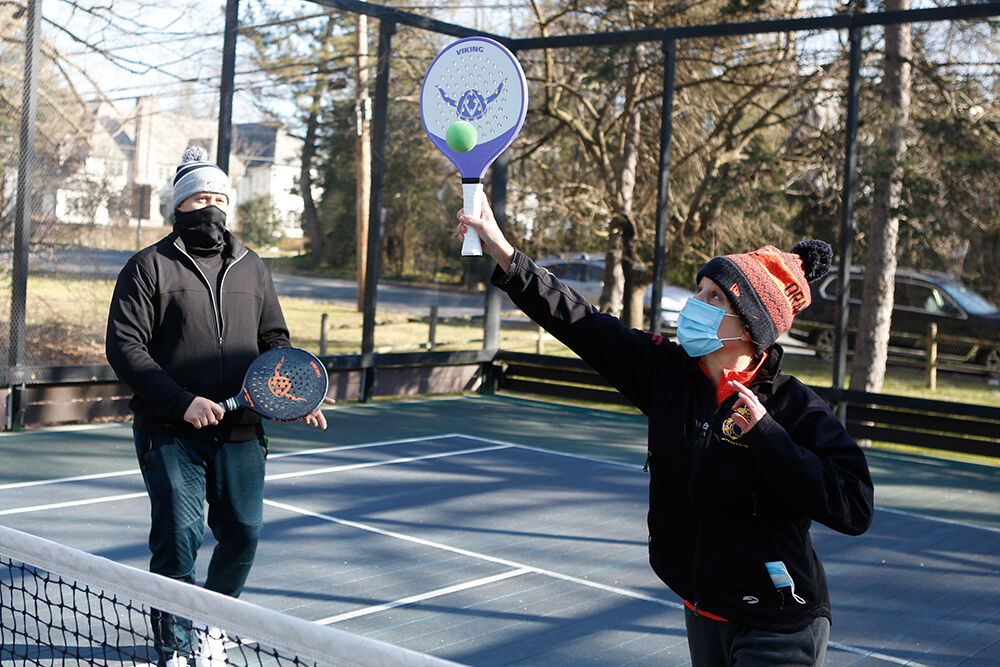 Lessons and clinics are available for women, men and kids of all ages.

In the spring it was hiking and biking, in the summer it was tennis and this winter it’s platform tennis. Outdoor activities continue to dominate during the COVID-19 pandemic.

Last winter, the Scarsdale Department of Parks, Recreation and Conservation sold 26 platform tennis permits for the village’s six courts, three on Brite Avenue, three at Scarsdale High School. This winter that number has grown nearly tenfold as the 200th permit and counting was sold last week. Assistant rec superintendent Bob Kaczmarek expects about 250 permits to be sold this winter and after not being able to hold private lessons and only a handful of clinics the last three years due to lack of interest, clinics and lessons for men, women and children are suddenly booming.

From two or three clinics per year to 16 so far through the first two sessions and at least six more to come in the final session, Kaczmarek is delighted with the interest.

“The growth is just astronomical,” he said. “The demand on the courts now has been such that coordinating access, dealing with permits to ensure that those that are using the courts are in fact valid users, is a full-time job. In years past it wasn’t as aggressively policed. The numbers didn’t justify the expense, but this year we made a conscious effort to increase the policing. It’s a good thing we did and it shows the results because of the numbers.”

Kaczmarek is in his fourth year with the department. His first winter he was handed the platform tennis program in hopes of rejuvenating it and that year the department put some money into sprucing up the under-utilized courts. Still he couldn’t drive interest in the sport, which revolved more around clubs, which offer varied amenities. “It was always disheartening to see,” he said.

Kaczmarek ran the platform program at Greenburgh before coming to Scarsdale, managing the four courts at Rumbrook Park. Each year a few thousand dollars was earmarked for court maintenance, with one court being given a facelift each year. Kaczmarek hopes to get on a similar schedule with Scarsdale’s courts, especially if they continue to get so much traffic. One of the Brite courts reopened last weekend after needing infrastructure work underneath, which the rec department’s maintenance crew was able to handle.

The rec department is using the same online reservation system for court time that it used for tennis in the spring. It took some of the regular players and some outsiders time to get used to the fact that they couldn’t just show up whenever they wanted.

“The pandemic caused us to have to really rethink how we were tracking people, how we were tracing people,” Kaczmarek said. “It’s satisfying to know we’re serving the community that we in fact serve. What’s really the most beneficial is that we have facilities out there being utilized. It’s a shame to have a facility and not see the participation. It’s mind-boggling right now.”

The lights are on until 10 p.m. and the courts are used to capacity most nights.

“The colder it gets the better it gets for the game,” Kaczmarek said. “Right now it’s been like spring out there. The true avid platform tennis players are like, ‘Come on, man, where’s the cold?’ We’re pleased to see it has taken off and we’re hoping we can retain the interest again next year. Right now we’re the only game in town.”

Tennis normally runs from April to Oct. 31. Last year that start was delayed to June due to COVID-19 restrictions and lasted into November. Adult passes for tennis are $120 — they were lowered this year due to the short season — and so far, 500 more were sold in 2020 than in 2019.

The platform season runs November through March. It’s a cold weather sport — the colder the better — and adult permits cost $95.

“It’s new for a lot of people,” rec superintendent Brian Gray said. “They need to learn how to play. It’s really a good opportunity for residents to get out and learn a new sport, and also use a facility that was kind of a dying sport. The increase in permit sales is unbelievable.”

The hardcore players from previous years, including a group that plays in the Westchester Platform Tennis League, didn’t need lessons because they knew how to play. The rec department has worked with the Scarsdale team to make sure they have their regular court time for matches.

The newcomers have embraced learning the sport.

“Since it’s gotten cold tennis is not an option anymore,” instructor Federico Toscano said. “A lot of people are afraid of indoors and they want a racket sport for the winter. I think this is a good option because you can do it all winter. You turn on the heaters underneath if it snows to clear the courts and you can play. It’s a very social sport and you can respect the COVID guidelines. There’s no contact and it’s a lot of fun.”

Toscano said platform tennis is “a little” easier to pick up than tennis and he even has some clinic participants who have never played a racket sport before.

Toscano likes to have a main focus for each clinic session — volleys, groundstrokes, lobs, screens, positioning, tactics — as he gets newer players used to playing on a court that’s four times smaller than a tennis court, uses a heavier, solid ball, paddles that are solid wood and where the cages can be in play.

“We want to try to make it dynamic all the time,” Toscano said. “We don’t want to just be throwing balls because people would get bored. You want them playing and if they hit two or three balls in a row they get excited.”

Platform or paddle tennis was invented in 1928 in Edgemont by Fessenden Blanchard and James Cogswell. Fox Meadow Tennis Club in Scarsdale, which now has nine platform courts, became the founding club of the sport three years later.

The sport’s surge in popularity isn’t just limited to Scarsdale, according to another rec department instructor, 2012 Scarsdale High School graduate Ben Shapiro, who starred for University of Rochester tennis and later became a collegiate coach.

“I talk to people all over Long Island, Westchester and Connecticut and [at] every club you can’t get a court all day,” Shapiro said. “It puts Scarsdale on the map a little bit. It’s good to have it expand and I’m curious to see if it continues after things go back to normal. I think it will because it’s fun and it’s pretty COVID safe.”

Shapiro worked at the U.S. Open this summer, but after the Grand Slam was held he began teaching tennis and now platform. October was his first time teaching platform, which he began playing three years ago. He teaches at Fox Meadow Tennis Club and for the rec department. “It’s insanely busy,” he said.

Outdoors is the place to be for other programming, too, as the youth basketball program isn’t running this winter. The rec department adapted to offer flag football, field hockey and youth running this winter at Butler Field, the turf field at the high school, as all village and school grass fields are closed for the winter.

“This Saturday would have been opening day for basketball with 800 kids,” Kaczmarek said. “We were still able to do something for 250 of them.”

There is a waiting list for all three programs run by recreation assistant Rich Massaroni, as time using Butler field is limited on Butler and there are restrictions on how many kids can participate at once due to the pandemic.

Gray said some of the independent sports organizations are also running winter programs.

“I’ve found starting in the summer and fall when we were offering some programs they really filled up pretty quickly,” Gray said. “The response has been tremendous. People want their kids to be out and active. Because we can’t use the indoor facilities, we’re trying to do our best outdoors for the residents in the safest way possible.”

No matter what the program or the circumstances the rec department is focused on safe. After that, “Participation is what it’s all about,” Kaczmarek said.