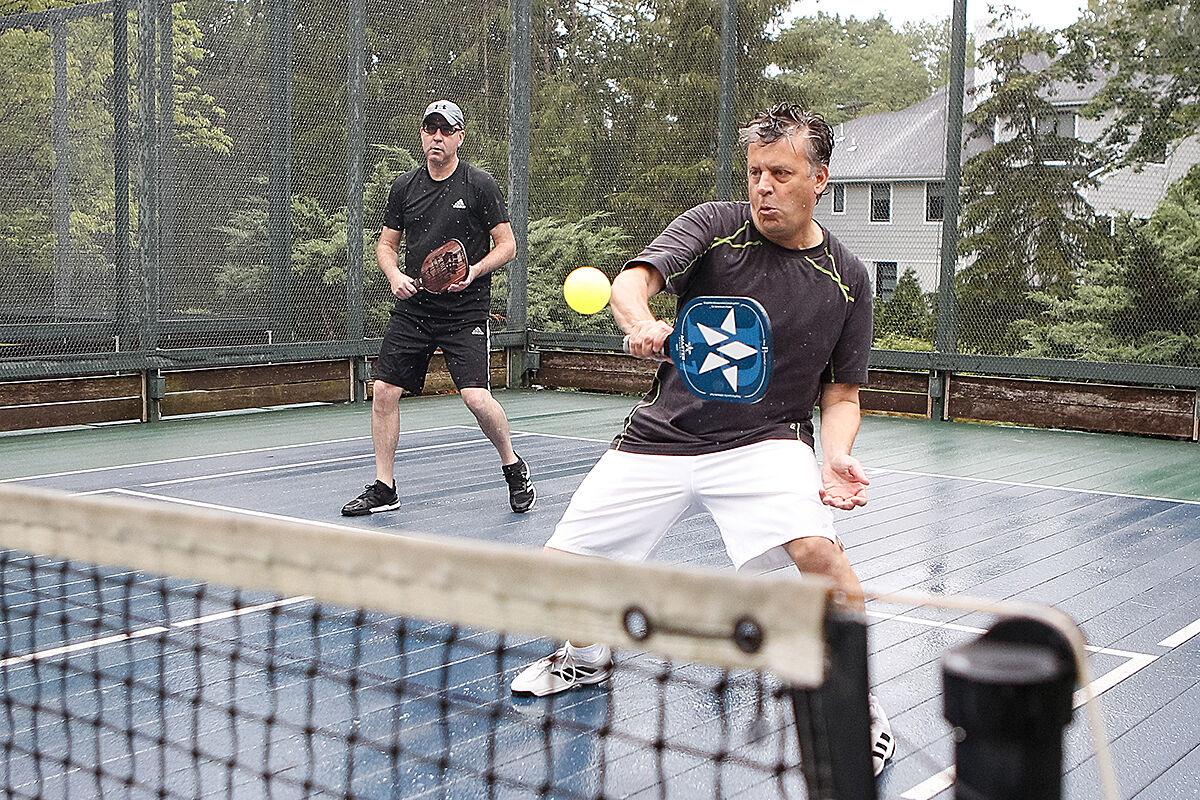 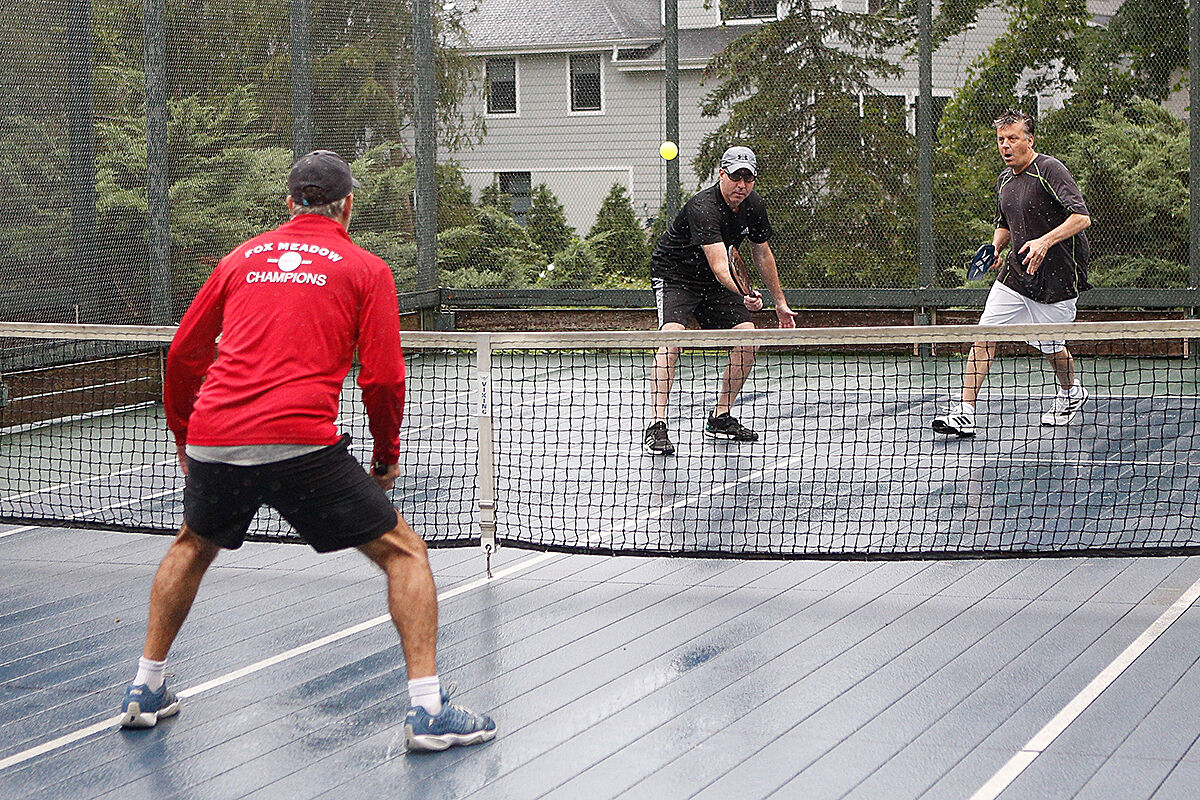 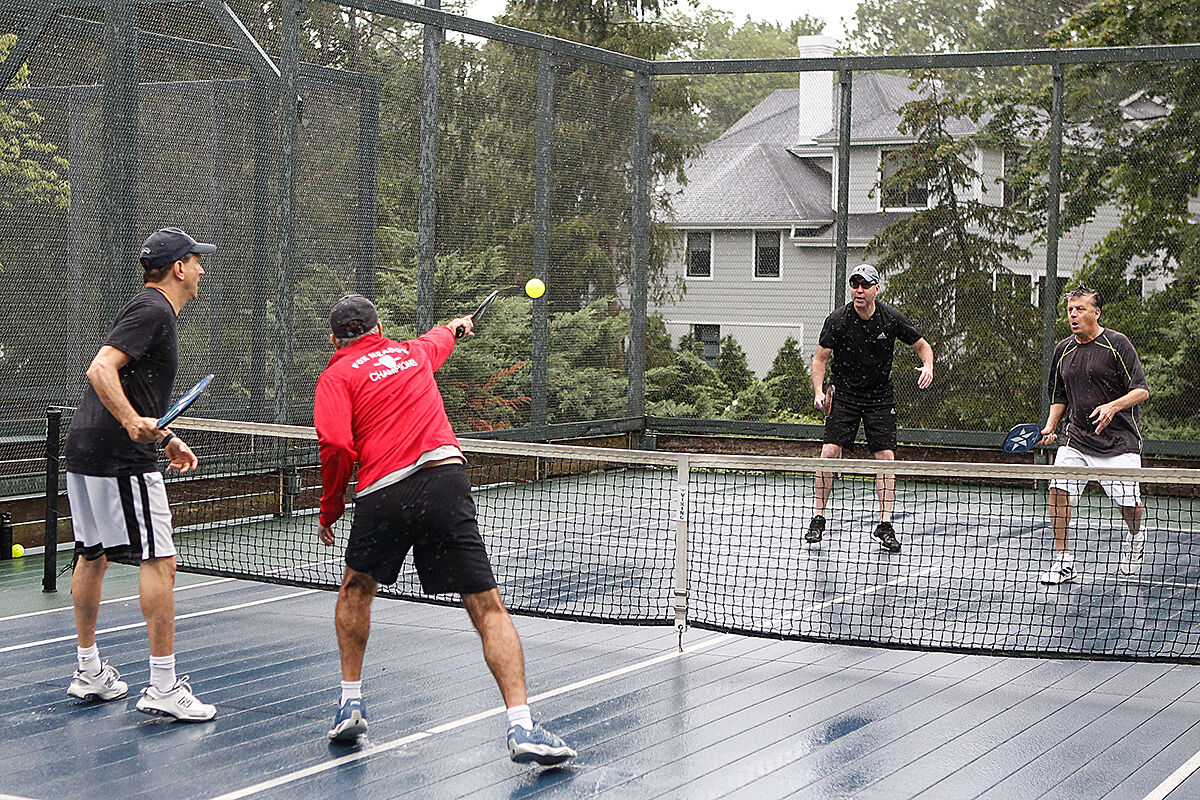 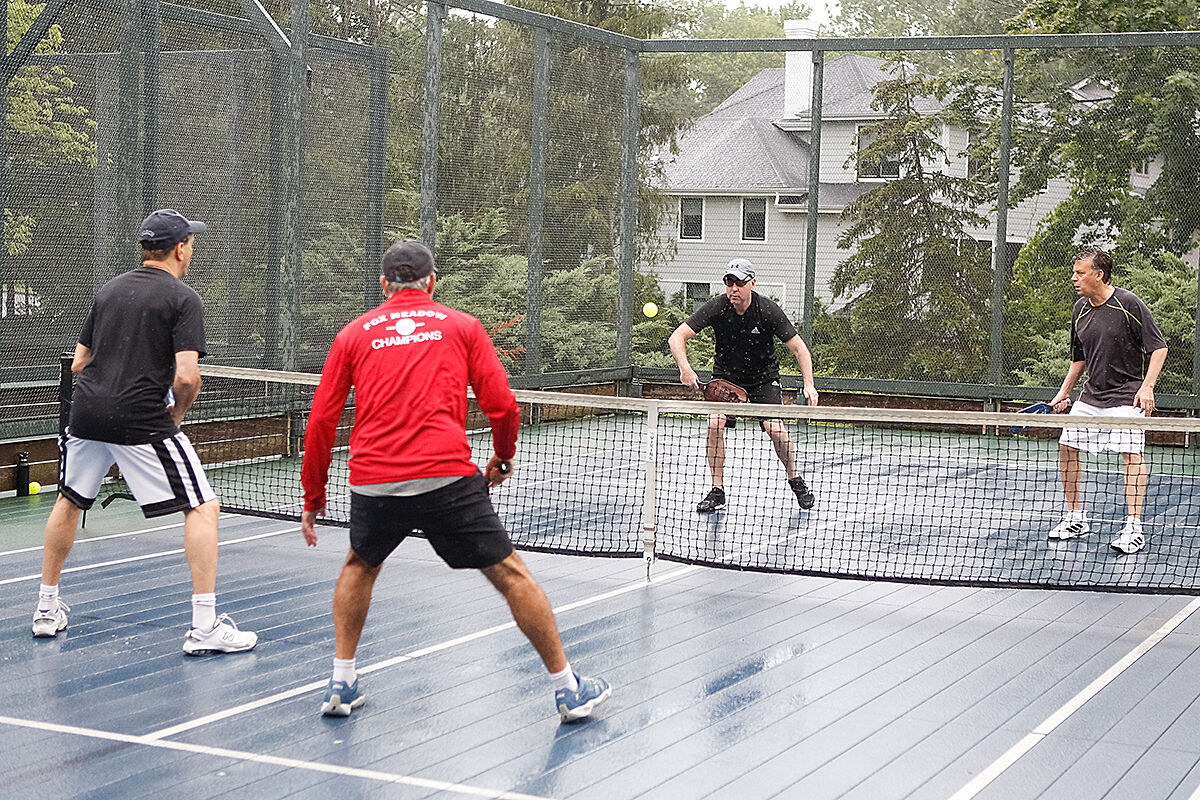 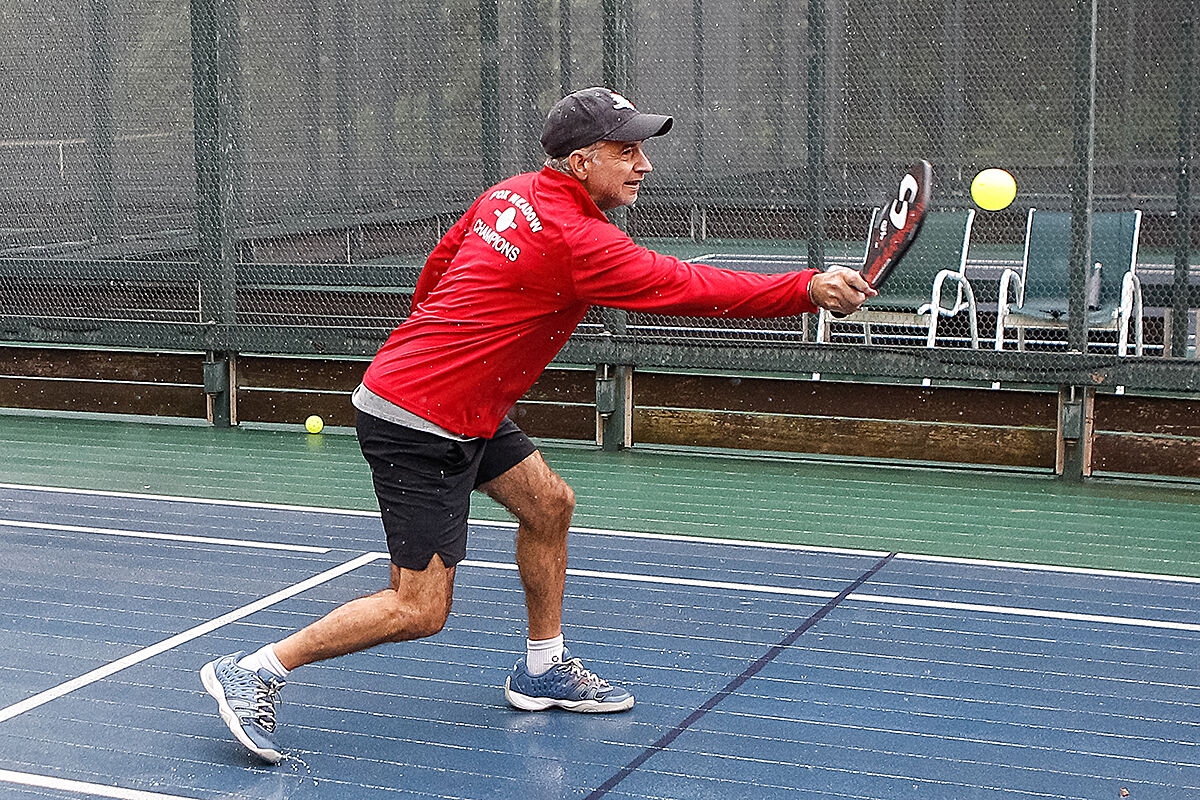 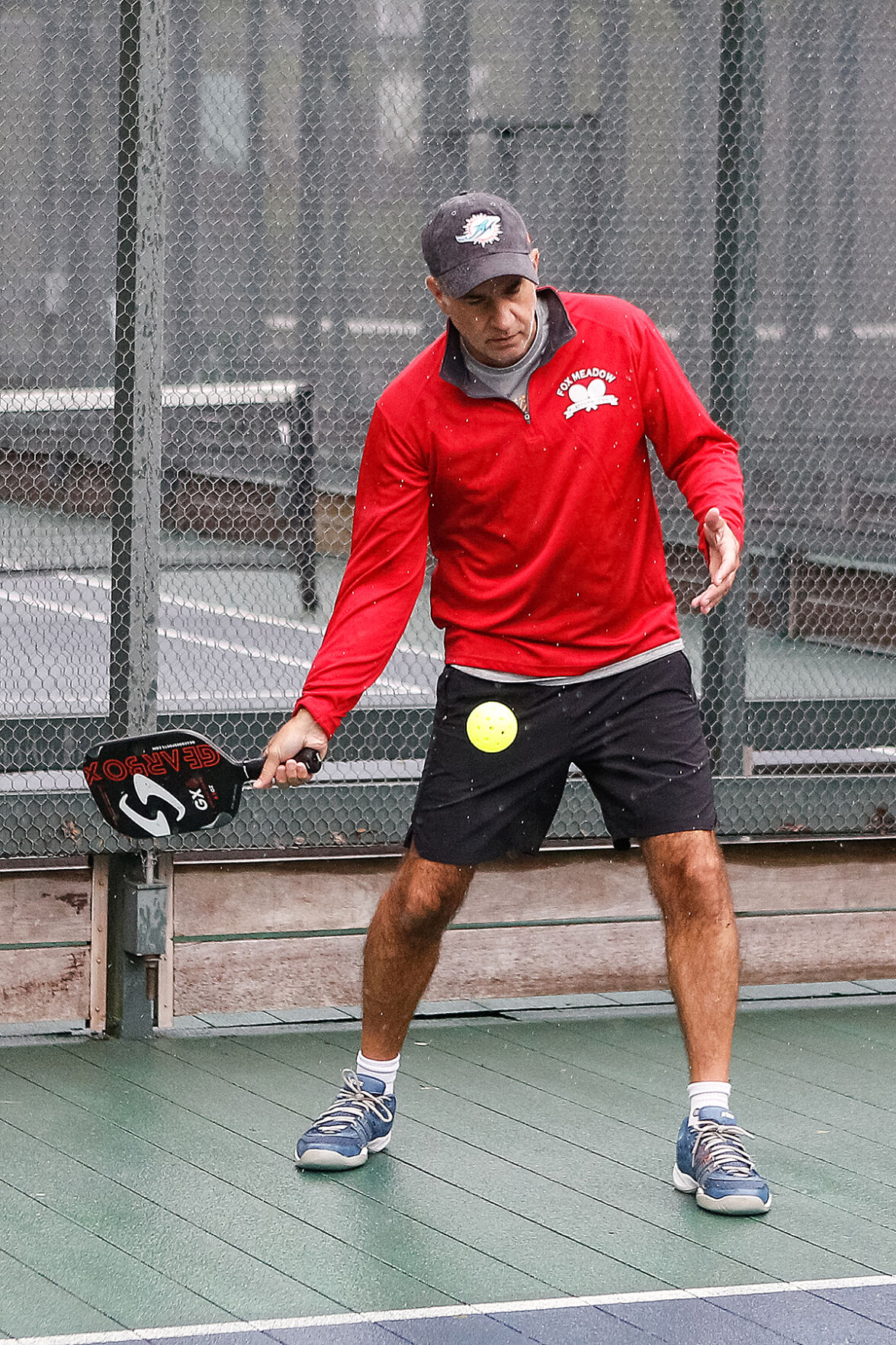 Cliff Seltzer of Scarsdale has helped bring pickleball to FMTC. 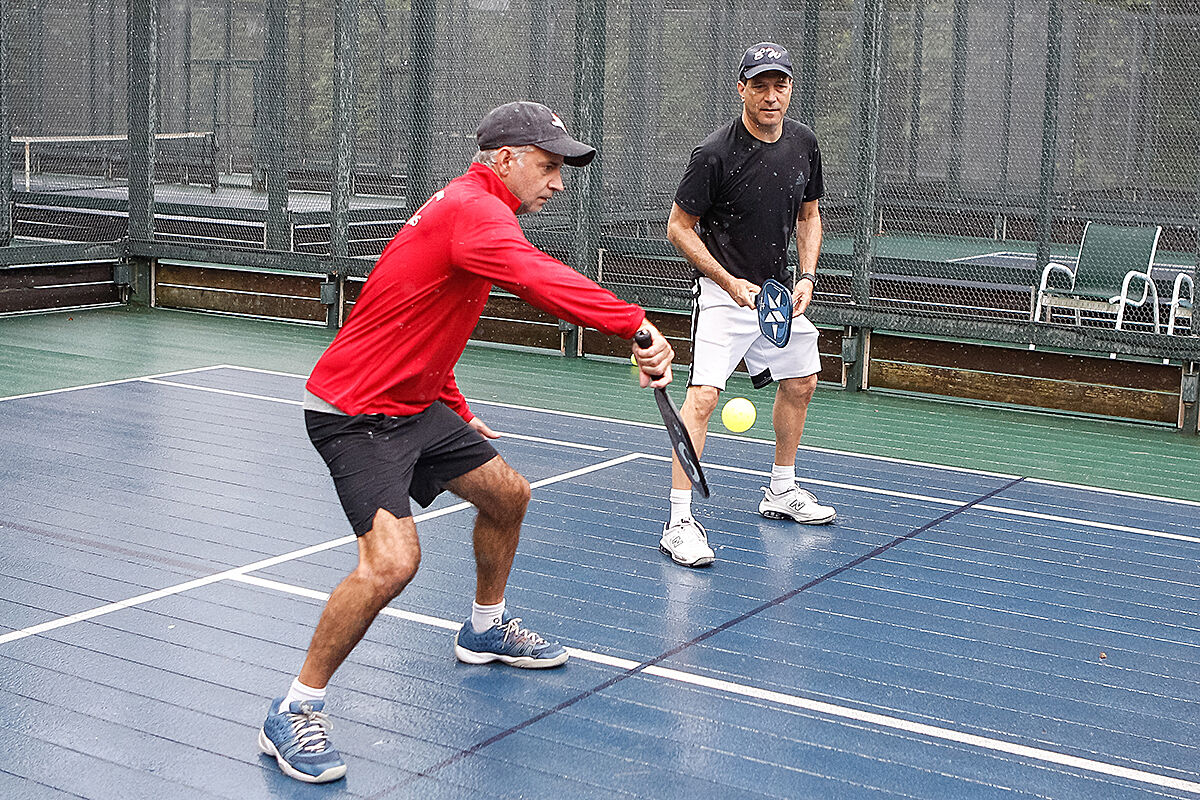 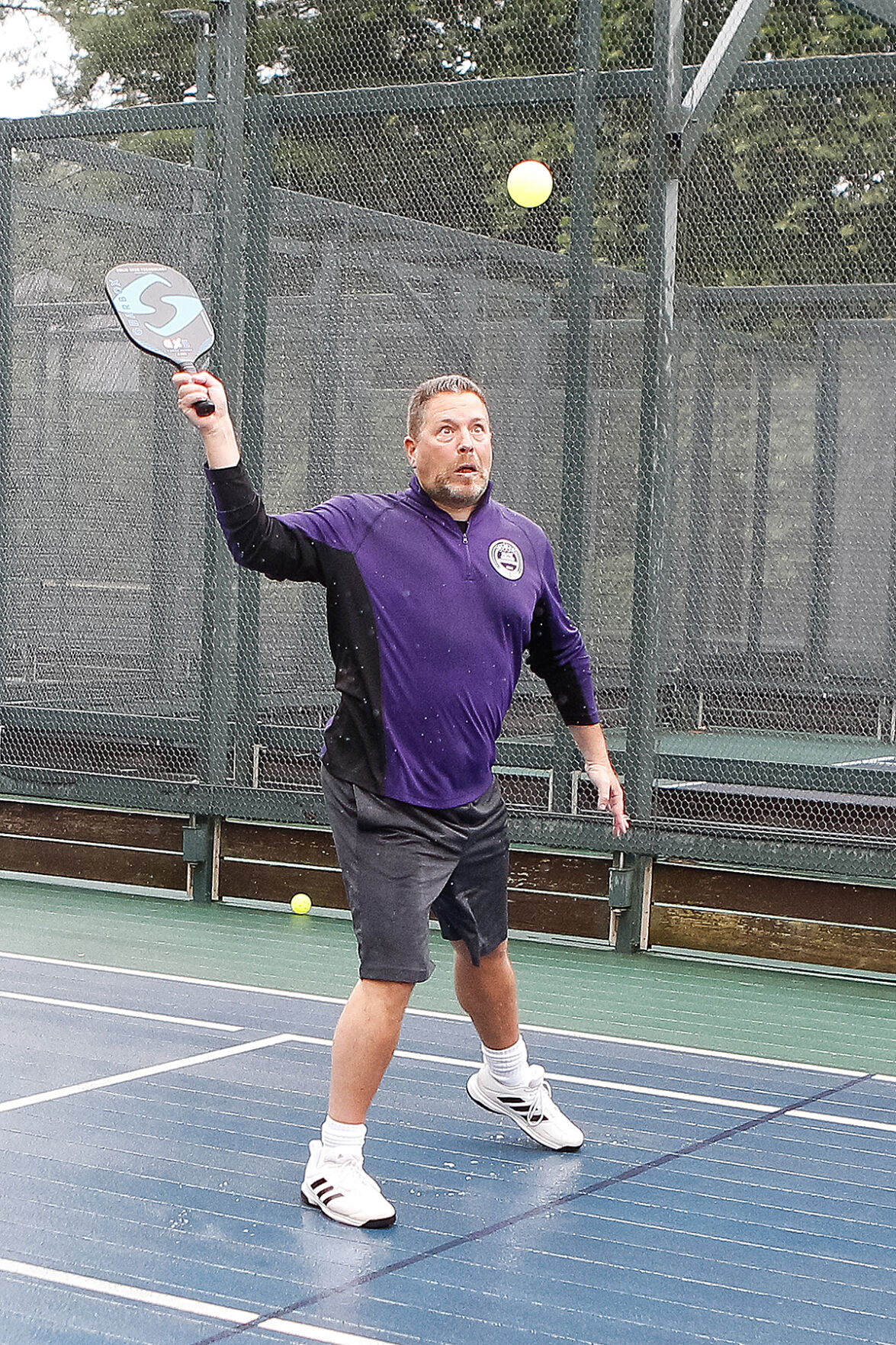 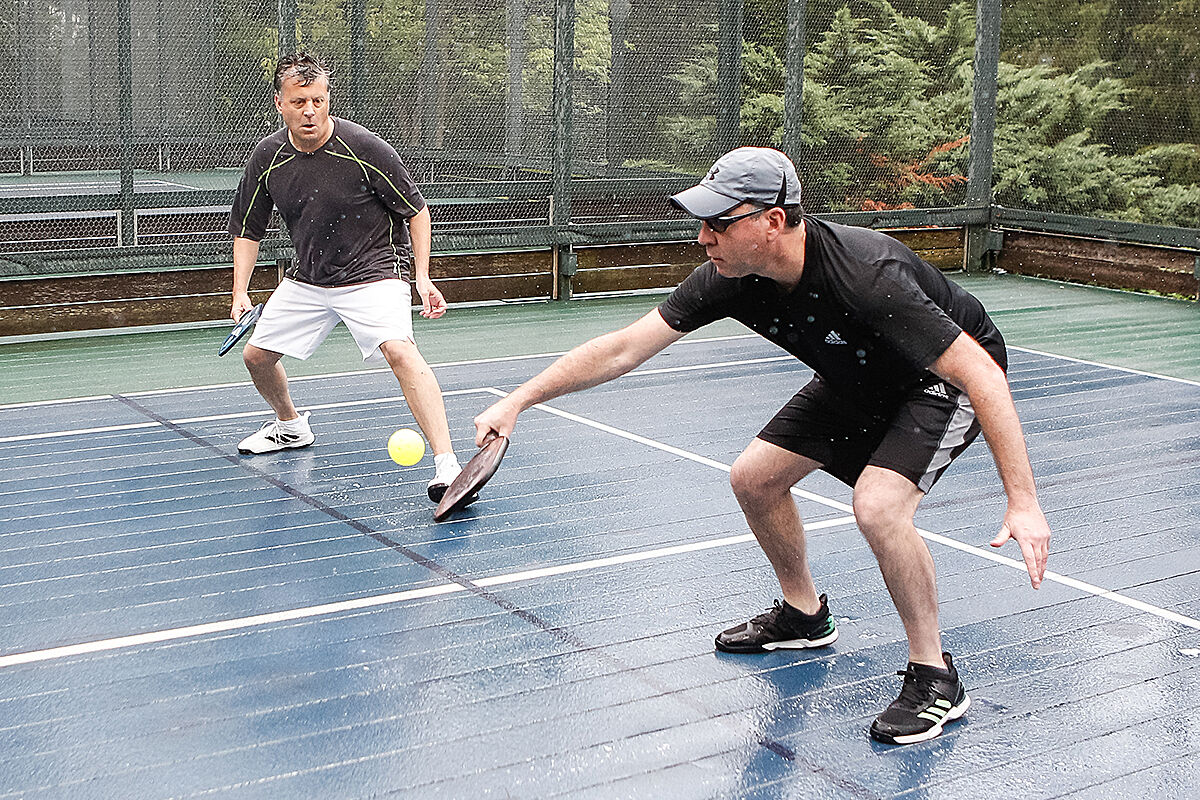 Joel Wollman of Scarsdale gets low for a shot. 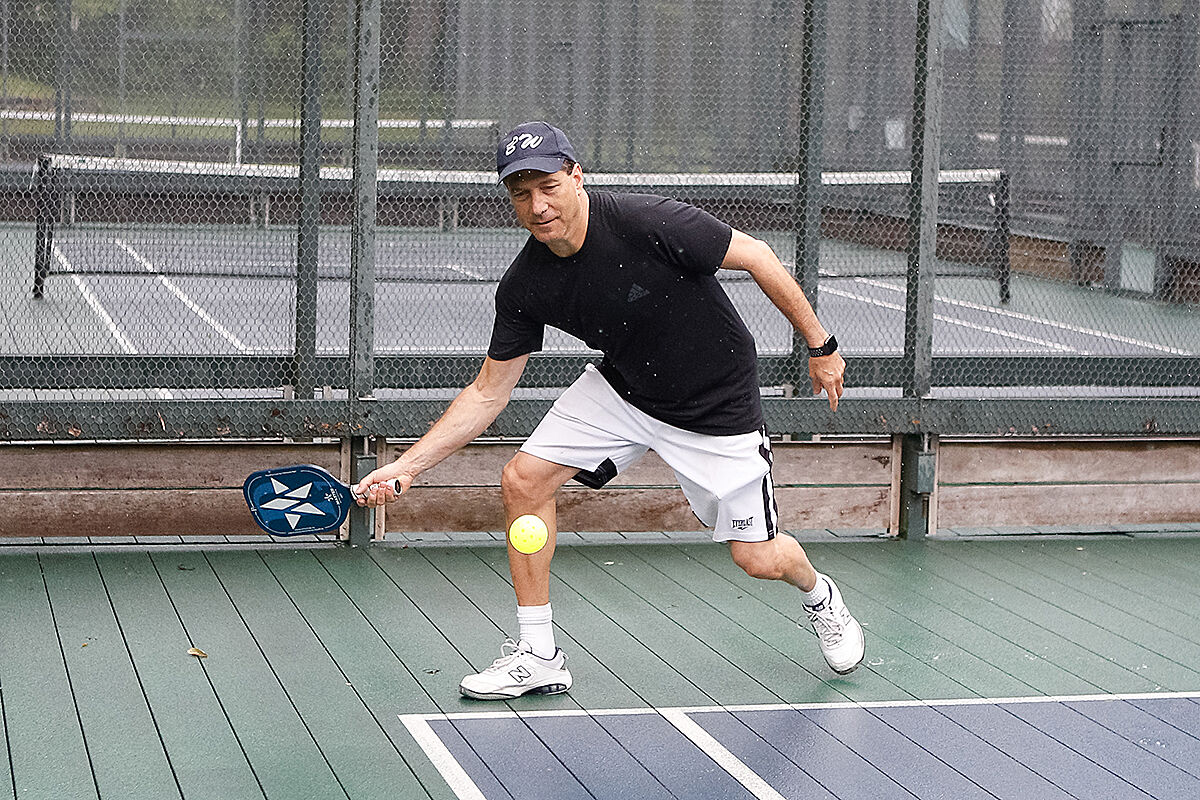 Joel Wollman of Scarsdale gets low for a shot.

When Edgemont resident Carol Weitzman first brought pickleball clinics to Greenburgh in 2014, USA Pickleball Association district ambassador Jim Geary echoed a statement he’d once heard about the sport — played on a small 20x44-foot court with a lightweight racket and an airy plastic ball with holes in it — calling it “pingpong on steroids.”

While Weitzman’s mission was accomplished and Rumbrook Park soon became a pickleball hub, the sport is finally making its way across the Bronx River to Scarsdale.

Holly Malekian, who has been playing with friends for many years, including at Rumbrook, has been trying to get pickleball going at Fox Meadow Tennis Club in Scarsdale, where she is a member, for many years with little success. She always saw it as “a natural fit” for the racket-only club that was founded in 1883 and was the founding club of platform or paddle tennis in 1931 after it was created in Edgemont three years earlier by neighbors James K. Cogswell Jr. and Fessenden S. Blanchard.

Despite the rich history of innovation at the club, which features nine heated platform tennis courts — six lighted — and six tennis courts — five Har-Tru, one hardcourt — and a clubhouse, pickleball just didn’t click at 14 Wayside Lane until last year when FMTC member Cliff Seltzer, who became “addicted” to the sport a few years ago, finally began to pique everyone’s interest.

For a few years, Malekian had been running a Thursday night group at FMTC with free lessons, but it never quite caught on as the hardcore tennis and paddle players viewed is as a sport “for geriatrics, not serious players,” she said.

“Then Cliff comes along and starts playing in earnest and showing all the guys the game, the real athletic young guys — like 40s and 50s and younger, their sons — and they’re playing for keeps,” Malekian said with a laugh. “This is hardcore and they didn’t want anything to do with my Thursday night bunch because these people are beginners. That started to build a vibe that pickleball is a real sport.”

Malekian isn’t sure why Seltzer was able to expose more people and make the sport more “legitimate” and “credible,” but she’s just happy it finally happened and is pleased to have helped lay the groundwork. “I feel very gratified that Fox Meadow is now embracing this sport, because for a while it felt like an uphill battle getting people on board,” Malekian said.

All of a sudden people started paying attention to Malekian, too, and she and Seltzer became ambassadors for the sport at the club, donating their time and resources to growing the sport.

“It’s a hot racket sport going on now,” FMTC vice president Lou Santangelo said. “We’re a great racket club, the birthplace of paddle tennis, and we plan on being a big part of the rise of pickleball in the region. Our members are going to be able to enjoy another racket sport. It’s become such a big thing in our region. In Florida and the south, it’s been around for a while. It’s a great addition for our members to have another racket sport out there, especially one that’s sweeping the area now.”

Current club president Shuling Hsieh Smith joined the club eight years ago and saw the various unsuccessful attempts to bring the sport to the club. She believes the COVID-19 pandemic was a catalyst for finally sparking interest.

“During the pandemic everybody wanted to do outdoor sports and they were looking for a variety of things,” she said. “Pickleball courts are very similar in dimension to our paddle courts, so we took advantage of playing there and seeing how that went. Cliff is very enthusiastic and very organized in bringing the game and giving good instruction. He’s diligently brought all of us there and one after the other we all just started playing.”

Club pro Pavle Jefferson got his certification in teaching the sport, which expands his role at the club and takes some of the burden off Malekian and Seltzer, but also gives the club more opportunities for spring and summer social gatherings around pickleball.

The club’s membership is limited to 160 families and there has been a waiting list for two years, so having a third racket sport will not only make that list grow, but it might take longer for there to be any openings. “We really are a family here,” Smith said.

With a waiting list for the club, a younger membership and 170 juniors participating in paddle tennis last year, Smith hopes to see pickleball make its way to the younger generation, too. Santangelo doesn’t see it as a hard sell anymore, though he admitted, “I wasn’t sold on it until I started playing.”

FMTC is working to make pickleball its third official racket sport and has put some initial money behind it in terms of buying house equipment and relining some courts. A bigger expansion to accommodate the sport using the current facilities is likely forthcoming.

“We have a working group looking at what we can work in there and how we can fit that in,” Santangelo said. “We don’t know exactly what it’s going to look like, but we do plan on creating pickleball courts on grounds so we can use them recreationally and in leagues. For a more permanent solution of what we can have on our grounds, we have a number of people, Cliff Seltzer included, working on that.”

While the ideal surface for pickleball is a hardcourt, it can be played on Har-Tru and paddle courts, the latter of which isn’t used much from mid-April through September, as paddle is a cold-weather sport and only a handful will play year round, though many of those players have converted to pickleball … Members who never appeared when it was above 50 degrees [are] hanging out at the courts this summer.

The sport isn’t difficult to learn and it’s not as taxing on the body as other racket sports — making it easier for people with injuries to play — as the equipment is lightweight and it’s in a smaller space. You can fit four pickleball courts on one tennis court, so instead of two or four people playing at once on a tennis court you have 16 playing pickleball, a good use of real estate.

• You can only score when you serve.

• When you serve the ball it must bounce on the other side of the net, and the return must also bounce. After that, both teams are allowed to volley.

• There is a no volley zone, 7 feet from either side of the net — an area called the “kitchen.” You can only go in the kitchen to hit a ball that bounces there.

Seltzer picked the game up while visiting his parents in Florida a few years ago, and last summer during the COVID-19 shutdown his family set up a makeshift court in their driveway, which drew interest from neighbors. It became the perfect time for the sport to catch on locally, and it’s no longer seen as a sport for the older generation. “It’s good exercise and, during COVID, it was something everyone could do,” Seltzer said.

Malekian said the sport “is for everyone.”

“It’s really picked up popularity at the club and other Scarsdale country clubs are playing as well and we get to play against them in the league, which is a load of fun,” she said. “We show up, everybody plays everybody and it’s competitive. The level in Westchester is not that great yet, but it’s getting there. Cliff and his guys are really good. Many of the clubs are just learning the sport.”

Greenwich Country Club pro Juan Arraya helped take the sport in the area to the next level when he sent an email in late winter/early spring to area country, golf, swim and tennis clubs that have Har-Tru courts and asked them about the creation of the Fairfield-Westchester Pickleball League, which got an overwhelming response prior to beginning league play in June. There are currently 69 teams, including FMTC, Sunningdale Country Club and Scarsdale Golf Club, playing in geography-based leagues with some clubs fielding multiple teams. “Just like that, it became the largest pickle league in the country,” Seltzer said.

“The transition from paddle or platform tennis to pickle is seamless — same size court, same type of strategy, the racket is similar,” Seltzer said. “Obviously the ball is different and you do a few things differently, but going from tennis to pickle there’s a lot of differences. The bulk of our members — at the end of the day Fox Meadow is a paddle place, the home of platform tennis — are there because we have the best setup for paddle around and we have tennis so you can do that, too, but we’re a platform club. Because of that, so many people are good and they picked up pickle so fast. When we go to these other clubs that are more tennis clubs playing pickle, we’re dominating them and they want to know how we’re good so fast.”

Fox Meadow, which had 169 national champions in paddle from 1935-2006, could start producing title winners in a new sport.

While municipalities aren’t involved with the Fairfield-Westchester league, many towns and villages are also expanding and reconfiguring their court space to meet the demand for pickleball. Scarsdale Parks and Recreation Department assistant superintendent Bob Kaczmarek, who oversaw last year’s surge in tennis permits and resurgence in the interest in platform tennis, said the village is currently doing a soft rollout for pickleball and assessing facilities and interest.

“I anticipate pickleball is really going to blossom once we get it up and running,” he said.

If Fox Meadow Tennis Club is any indication, pickleball is the next big hit.

Pickleball was invented in 1965 on Bainbridge Island, a short ferry ride from Seattle, Washington. Three dads — Joel Pritchard, Bill Bell and Barney McCallum — whose kids were bored with their usual summertime activities — are credited with creating the game. Pickleball has evolved from original handmade equipment and simple rules into a popular sport throughout the U.S. and Canada. The game is growing internationally as well, with many European and Asian countries adding courts.