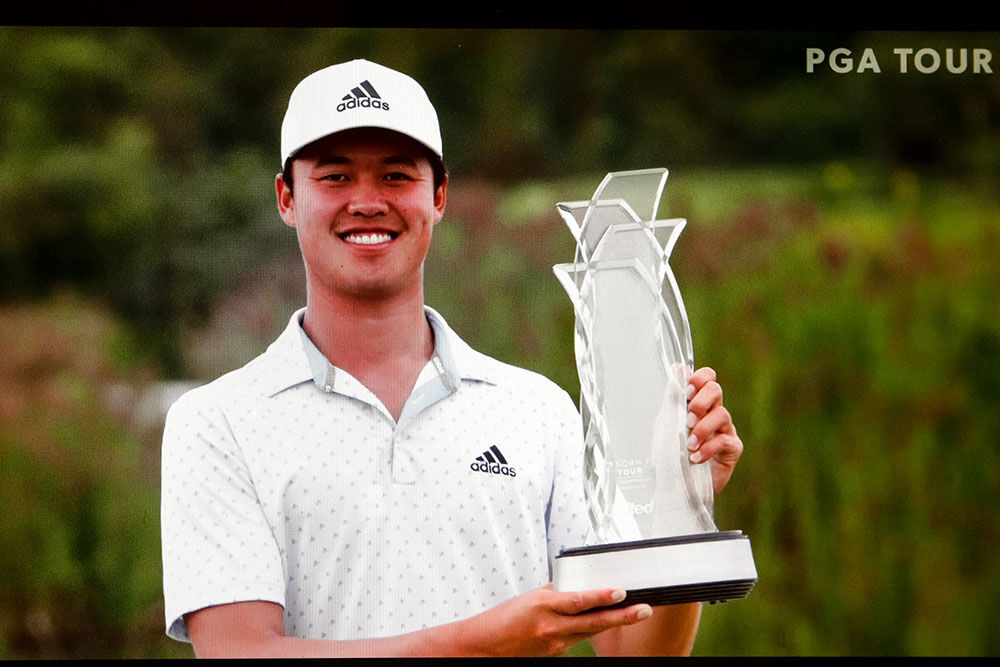 Brandon Wu poses with his trophy after winning the Korn Ferry Tournament Championship Aug. 30 at the Victoria International golf club in Newburgh, Indiana. 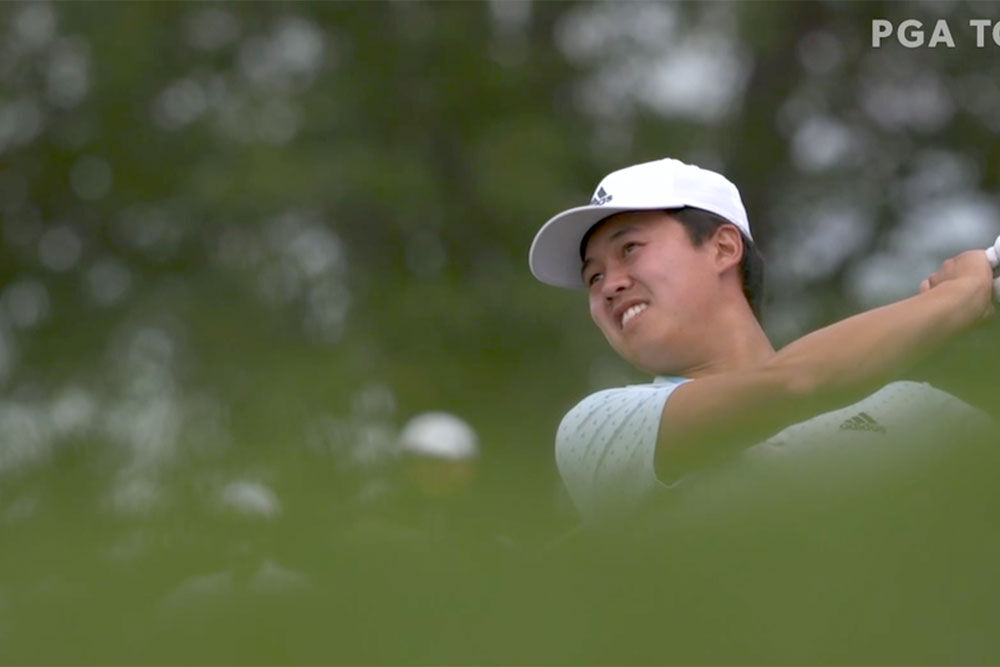 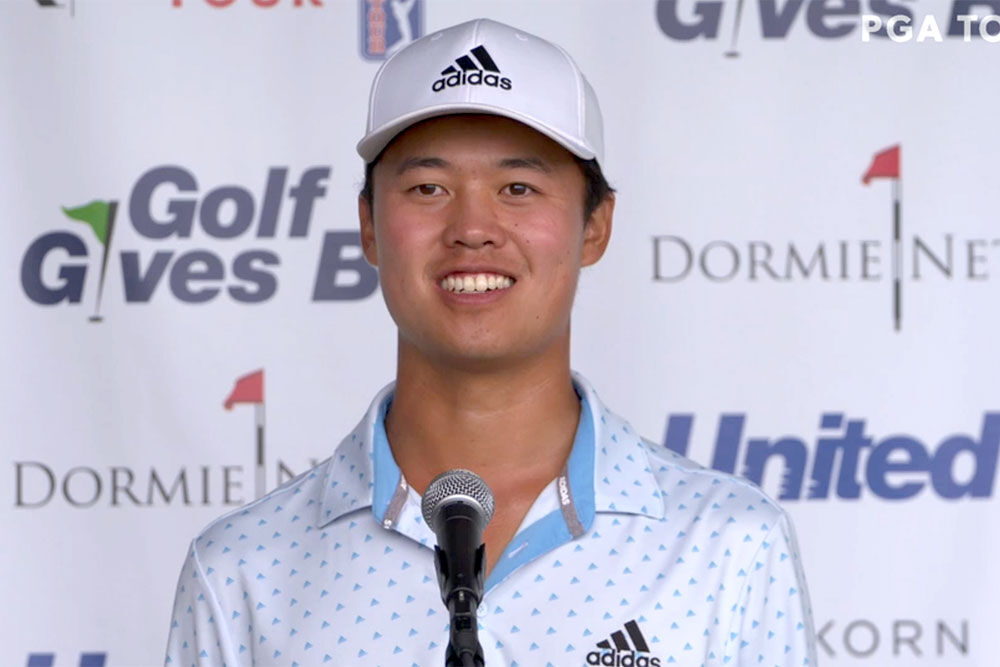 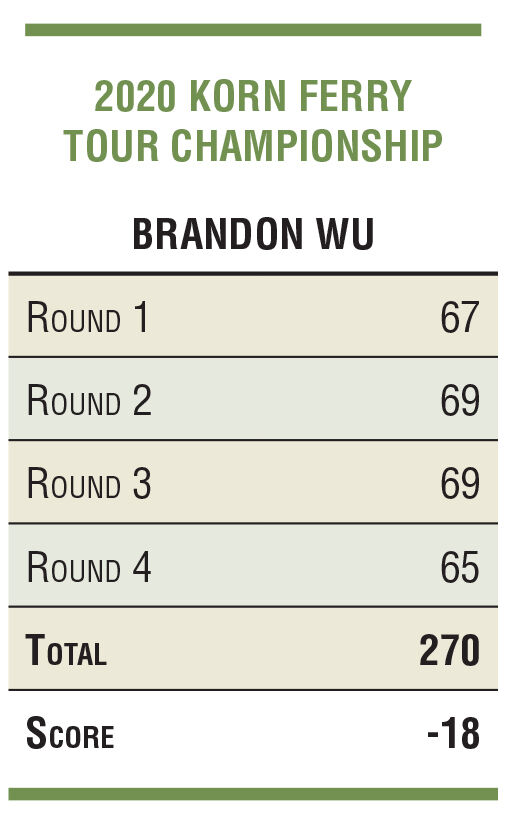 Brandon Wu has earned a trip home, and this homecoming is a special one.

For the past eight weeks, the 23-year-old Scarsdale resident has been on the road playing golf tournaments across the country on the Korn Ferry Tour. For Wu and all the participants on the tour there was one main goal: finish in the top five to earn a coveted spot among the 144-player field qualified to compete at the upcoming U.S. Open golf championships at Winged Foot starting on Sept. 17.

It all came down to the Korn Ferry Championship Tournament presented by United Leasing and Finance at the Victoria International Golf Club in Newburgh, Indiana, and Wu definitely saved his best for last.

Heading into the final round Sunday in Indiana, Wu was far behind down five shots from the leaders on the scoreboard. Winning the tournament was a long shot, but he knew he still had a good chance to finish in the top five and qualify for the U.S. Open if he played well.

With the pressure on, Wu responded with one of the best rounds of golf in his life. He finished with a bogey-free, 7-under par 65 final round to win the tournament championship by one stroke. And with the title, he also qualified to compete at the U.S. Open against the best golfers in the world about five miles away from his Scarsdale home at Winged Foot in Mamaroneck.

“I’ve known it would be at Winged Foot for a couple of years, and to see there was an opportunity and then achieve it and get there, it’s incredible,” Wu said of coming home for the Open. “It’s super exciting and hasn’t really set in yet. I’ve run through this scenario so many times the past few days — what would it feel like going home and getting to play, telling my friends and family — it’s just hard to believe at this point. I’m really happy how it unfolded. Once I saw it was Winged Foot, that’s so awesome for me, I live maybe five minutes down the road.”

To reach his goal, it certainly helped to turn in a round of golf like he played on Sunday. Waking up in the morning, five shots off the lead, Wu decided to forget about the leaderboard and just focus on hitting good shots to stay in contention to earn a top-five qualifier finish.

Wu says he still didn’t know where he stood on the leaderboard until the final hole when he asked his caddie for some advice on how to play a chip shot and the caddie said Wu was in the lead by one. Wu changed his approach to that shot, chipped it to within a foot of the hole and tapped in the putt for par to maintain his one-shot lead that held up for the victory.

“Honestly, I didn’t know what the leaderboard was until the 18th hole,” said Wu. “I was just short of the green, about 25 yards downhill, kind of difficult and I asked my caddie if I should play it safe and he said I was in the lead. I hit it to about a foot of the hole and it was great to not have the pressure on that last putt. All day long I was just trying to keep hitting good shots. I hit irons well, made some key putts, a good birdie putt on 10, a key two-putt on 11 for par, a 6-foot putt for par on 12, shots like those were key to keep the momentum. I was just trying to play well and not necessarily to win. I had to hit a lot of good shots and to come from behind like that the last day and win, it’s super special.”

Sunday capped off a busy summer of golf for Wu as he competed on the Korn Ferry Tour. It didn’t help for the golfers as the COVID-19 epidemic changed the schedule and also adjusted the qualifying standards to earn a spot to compete in the U.S. Open.

Wu came on strong to be in contention for a qualifier berth entering the championship tournament in Indiana, and then he capped it off with his first Korn Ferry tournament championship with his dramatic finish on Sunday.

“It’s almost surreal, just over a month and a half ago I was still playing Monday qualifiers and hoping to get a schedule going,” Wu said. “Standing here six-seven weeks later, winner of the tour championship, it’s an amazing feeling and quite surreal.”

Now, he gets to keep playing in one of the most prestigious tournaments of them all. The U.S. Open is one of the four Majors competed each year on the PGA tour along with the Masters, the PGA Championship and the Open Championship.

All the best golfers in the world will be coming to Westchester to compete in the U.S. Open, and Wu will be coming home. A member of the Scarsdale Golf Club, he has two weeks to practice on his home course before getting ready to drive up the road to compete at Winged Foot.

Of course, he’s used to the pressure of playing with the best as it will be his second time competing in the U.S. Open. After leading his Stanford team to the NCAA championship last year Wu earned a spot to compete in the 2019 U.S. Open at Pebble Beach in California. He finished tied for 35th place among the 156-player field and the PGA tour had a special surprise waiting for him on the final hole.

“That was an incredible experience,” Wu said of the U.S. Open at Pebble Beach. “I was paired with Dustin Johnson on the final day. It was actually the day of my graduation at Stanford, so I missed graduation, but they presented me with my diploma on the 18th hole.”

That first U.S. Open was one he will always remember, competing at Pebble Beach in California with his Stanford teammates cheering him on. His second U.S. Open should also be a memorable one competing so close to home, although spectators will not be allowed this time due to the pandemic.

Add in the thrill of winning an NCAA championship with Stanford, and Wu is off to an impressive start to his golf career. In addition to earning him a spot in the U.S. Open, his Korn Ferry victory also earned him a spot in two PGA tournaments next year, and depending on how he performs in his three PGA events he could qualify for additional tournaments as well.

“Going through each experience, I’m trying to learn from them and I feel they’ve prepared me well and put me on a good path helping me to grow to be the player I am today,” admitted Wu.

Next stop, Winged Foot, and the future path looks bright.