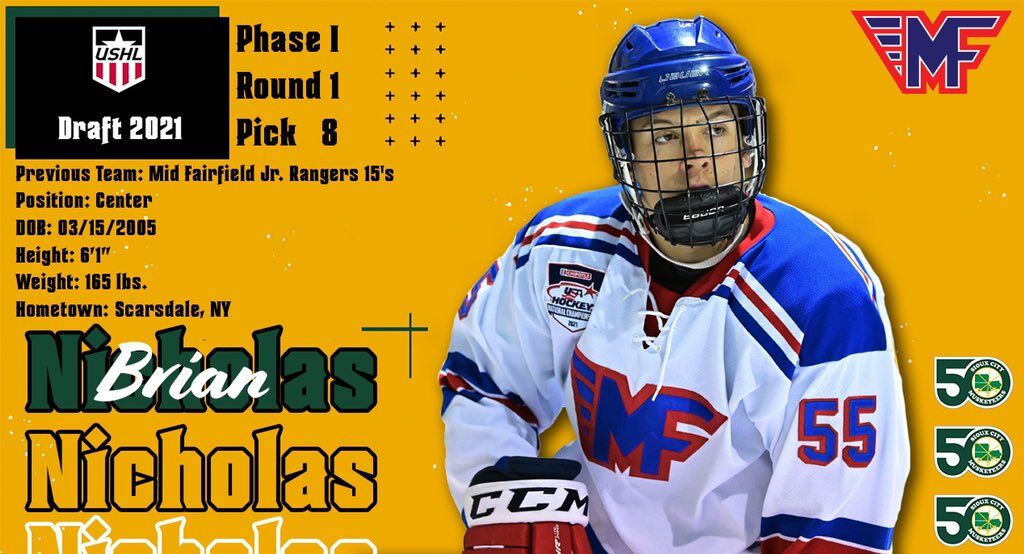 Rising Scarsdale junior Brian Nicholas was selected eighth overall in the USHL draft by the Sioux City Musketeers on May 26. 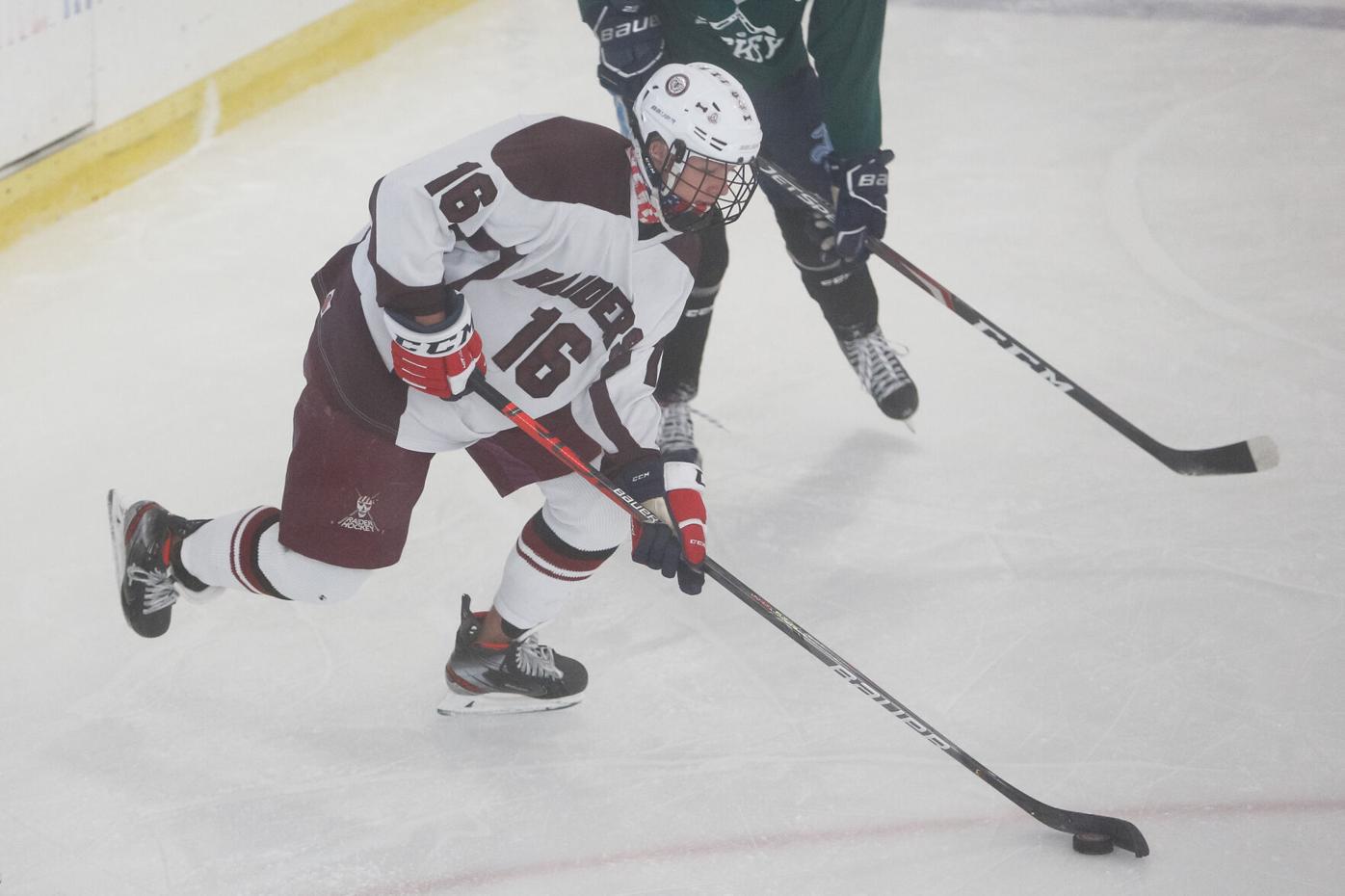 While his four older siblings have a trophy room to be envious of between high school championships, NCAA championships, Player of the Year honors and more in a multitude of sports, Scarsdale High School rising junior Brian Nicholas is paving his own path to greatness.

In 2021 alone, Nicholas and his junior ice hockey team made the semifinals of nationals, he was the eighth overall pick in the United States Hockey League draft by the Sioux City (Iowa) Musketeers and he helped his high school golf team to its sixth Section 1 team championship in eight seasons.

Nicholas credited James (SHS Class of 2015), Michaela (2016), Stephen Jr. (2016) and Erin (2017) and their accomplishments in high school, travel, college and even, for James, professional sports — he’s working on a tour card for the PGA — for setting the tone of his own athletic endeavors.

Prior to the USHL draft, Nicholas made the final cut of 49 players from 14 states born in 2005 being considered for the 2021-22 U.S. National under-17 team at the USA Hockey National Team Development Program (NTDP) Evaluation Camp from May 9-13 at the USA Hockey Arena in Michigan. Nicholas was among 27 forwards in the mix, but a back injury on the first day of the camp may have kept him from making the team.

“It was definitely an honor just to be selected down from 30,000 to know you’re top 49 in the country,” Nicholas said. “I definitely knew it was an honor, but at the same time that it’s an honor, I don’t want to be top 49 — I want to be top 1. It’s an accomplishment, but I am not satisfied until I keep going until I can’t go anymore.”

Nicholas still has a chance to represent Team USA when he heads to Buffalo July 7-13 to try out for the Five Nations Tournament, which takes place in August in Switzerland. Nicholas sees this as a chance to redeem himself from the NTDP camp.

“I couldn’t really turn or anything like that, so I wasn’t able to do much at the tryout and didn’t have my best week,” he said. “I couldn’t perform to what I expect myself to, but now I can try for this.”

Nicholas and the Mid Fairfield Youth Hockey Association Junior Rangers 2005 USA Tier 1 under-15 team lost in the national semifinals 2-1 in a shootout after triple overtime. “We outshot the other team 57-12, but their goalie just played incredible,” Nicholas said. “It was a heartbreaker.”

Nicholas has been traveling often this year as Mid Fairfield found states to play in that were open during the COVID-19 pandemic and he was in Sioux City last weekend for a training camp, his first live exposure to the USHL.

Being the team’s first draft pick, and being taken eighth overall, was something that further set Nicholas apart.

“When I got drafted it was one of the top moments of my hockey career,” he said. “I went out there and everybody was like Iowa is in the middle of nowhere, but the hockey community is great. They have like 6,000 fans a game and their rink fits around 9,000. It’s a huge arena and the facility is great, the coaching staff is great and I think this past year they had five NHL draft picks and I think they’ve had 19 previous players playing in the NHL right now. They produce a lot of NHL players, so being the No. 1 draft pick was an honor. To know that’s the potential type of player they can produce reminds me that I have to work even harder.”

The country’s lone Tier I junior hockey league has produced at least 50 NHL draft picks each of the last three years and has more than 800 former players on NCAA Division I rosters.

“Brian’s a kid that we’ve been tracking for a long time and we’re getting a pro-style left winger that can play in the middle as well,” Johnson said. “He’s a versatile kid. Just in the Western Conference we need guys that can really get up and down and play a heavy style of hockey. Brian had a great year for Mid Fairfield. He’s gonna play next year u-16 hockey and get some games for us probably along the way and then we expect him to be here full time in a year or so.”

He added, “He’s a big-time goal scorer. That’s his No. 1 attribute is he scores goals and he’s done a great job. Brian’s a kid that we’ve been tracking a long time and comes from a good family and a great program at Mid Fairfield. They went on a good run to the national tournament and he’s a guy that’s not gonna take long to get here.”

The 2020-21 team featured players from Minnesota, Missouri, Texas, North Dakota, Ohio, Wisconsin, Massachusetts, New Hampshire, Florida, Connecticut, New York, California, Virginia and Illinois, in addition to international players from Finland, Canada and Switzerland. With players as old as 21 years of age, for his first year with Sioux City Nicholas expects to play about 15 games and fly out to join the team six times from September to April for the regular season and then joining the team full time and finishing up high school in Iowa as a senior.

In addition to playing select games for Sioux City, Nicholas expects to be quarterbacking the varsity football team this fall, playing high school hockey over the winter, playing travel for the Long Island Gulls and winning another golf title in the spring. (His freshman season of golf was canceled due to the pandemic.)

“This year I’m going to do as much as I can and be there for high school as much as I can,” Nicholas said. “I’ve always loved playing hockey with the guys I learned to play hockey with when I was little. Skating with them is always fun. If I left this year it would be like leaving them out to dry. I wouldn’t feel right leaving them. I want to have one last run, a last chance with them to win a section championship.”

Nicholas knows he has big cleats to fill for football with senior Ben Miller — and Noah Ebner Borst at times — having quarterbacked the Raiders to a strong COVID-shortened season in the fall 2 season.

“It’s going to be a challenge replacing a lot of guys, but I’ve been working hard and I think it’s nothing I can’t do, but at the same time I’m putting in a lot of work this summer for football and hockey and golf,” he said.

As for golf, Nicholas said, “Winning the Section 1 championship was probably the top moment of my high school career so far by far. Being able to make the sectional team and the cut for individuals was a great experience.”

On the ice, stick-handling and scoring have always been Nicholas’ strengths, so the last few years he’s been focusing on his skating. He typically skates at 6 a.m. before school with coach Erik Nates, goes home for a quick shower and then heads to school.

“That’s really starting to show,” Nicholas said of the improvement. “My stick skills have always been the top of my game and I’m always trying to improve them, but I’ve really focused on the skating to get my full game rounded off.”

College coaches were permitted to contact and talk to Nicholas on Jan. 1 and he’s been getting “a good amount of contact.” Right now his top five are Boston College, Penn State, Harvard, Notre Dame and Michigan.

“Hopefully I’ll be committed to college around Aug. 1 of this year and I’ll play college and then hopefully after that I’ll be able to play pro,” Nicholas said. “That’s the goal.”