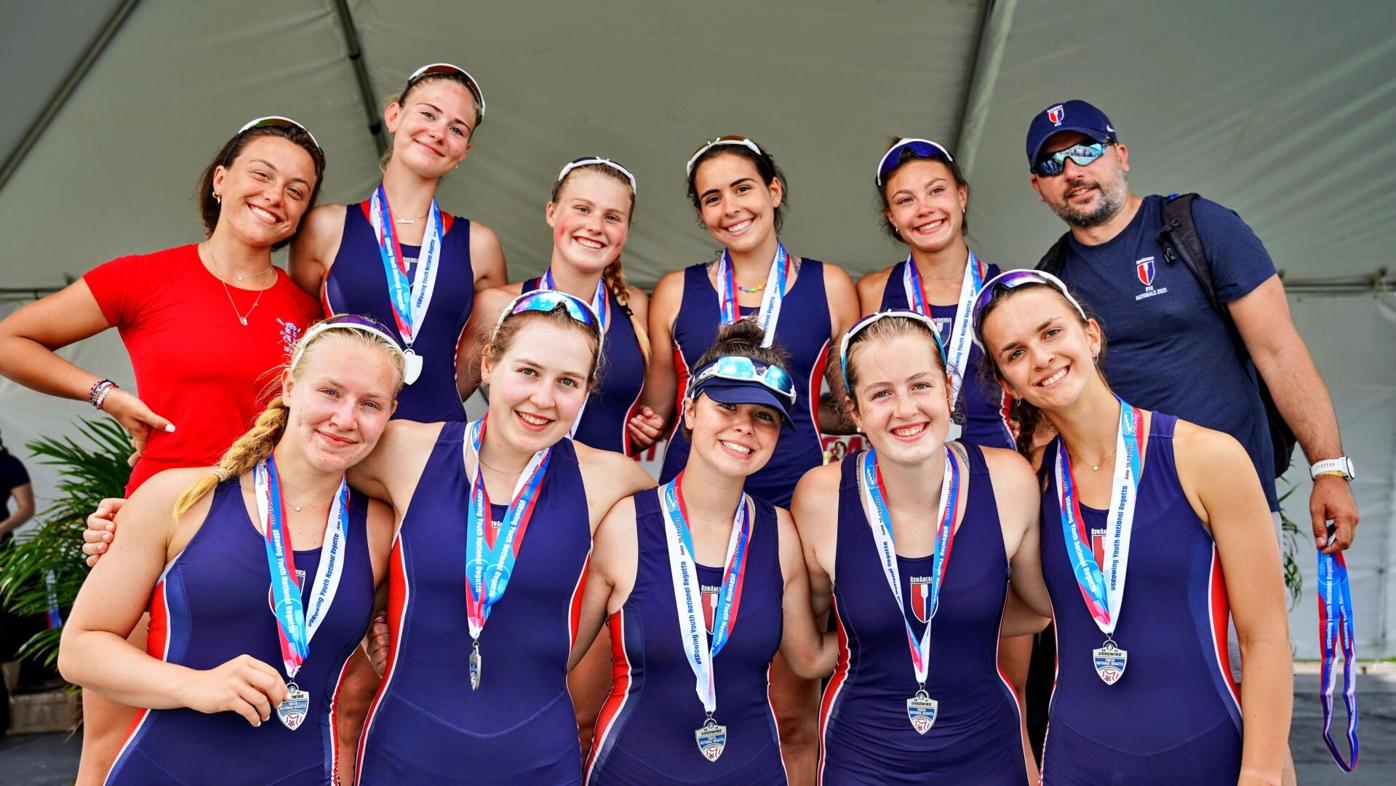 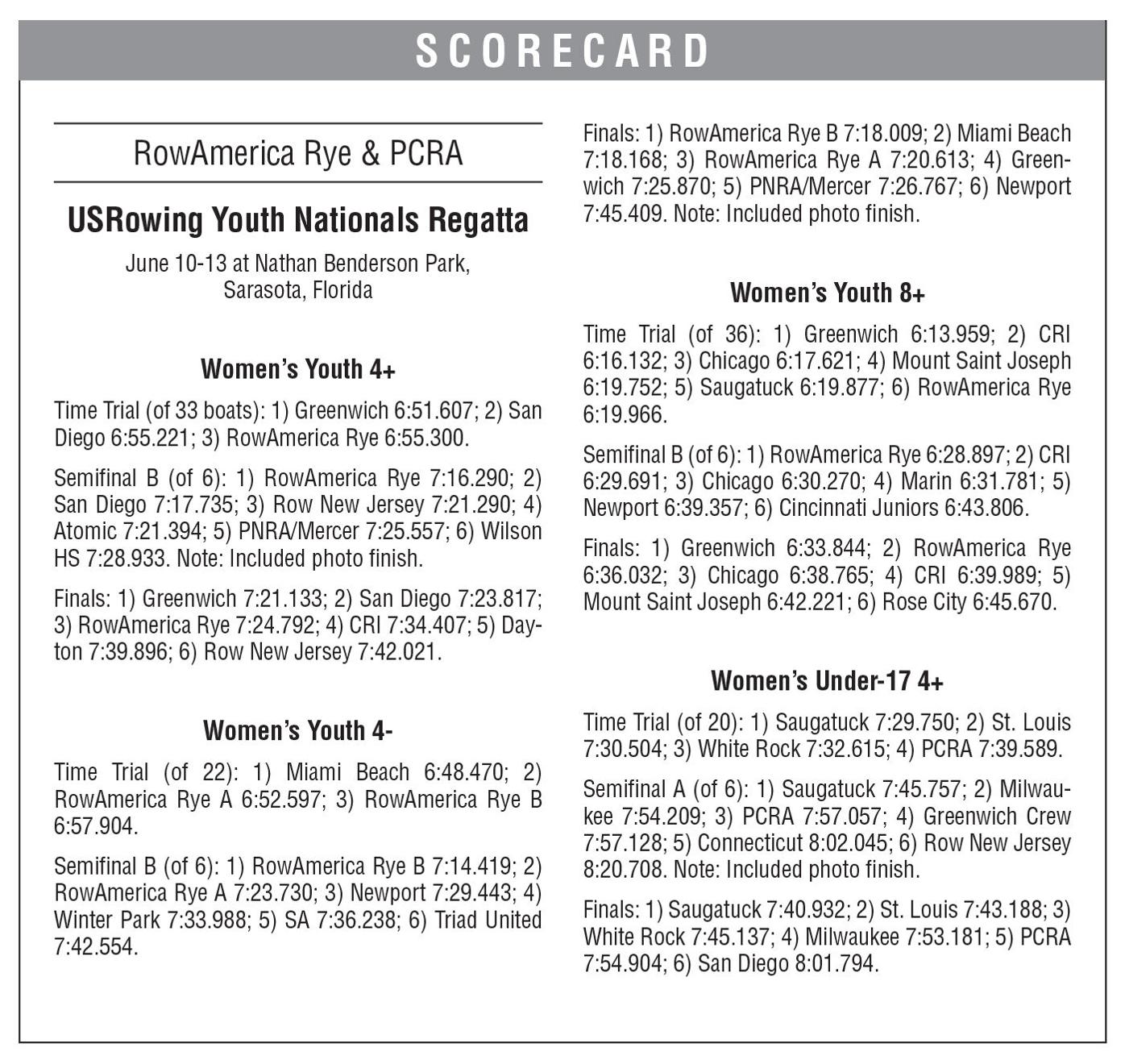 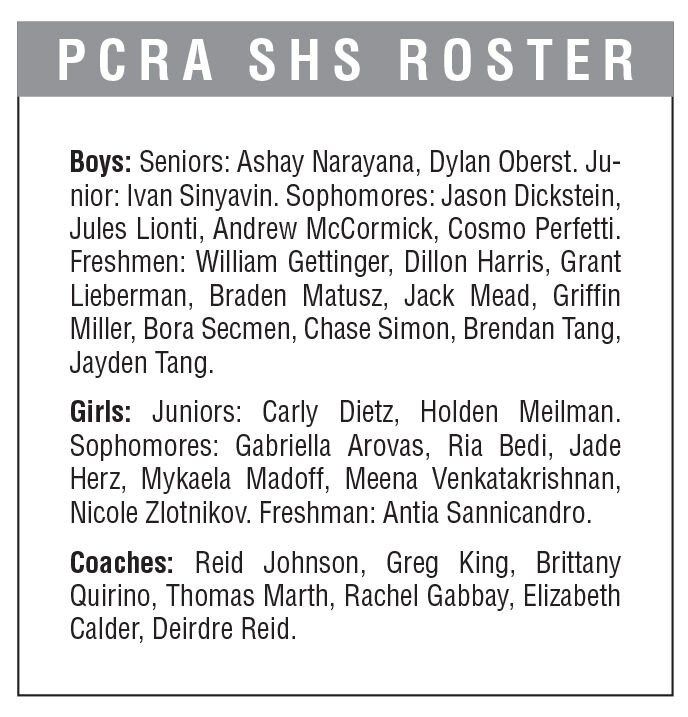 After a trying year due to the COVID-19 pandemic, the sport was relegated to virtual meetings from March to June 2020 before single boats could eventually go on the water, followed soon by doubles and quads, even later by eights as 2020 went on. Indoor facilities over the winter were too small to house athletes and coaches safely, so tents were rented or teams were back to the virtual mode working out at home.

But like rowing is both a physical and mental sport, so was the challenge of getting through the pandemic to a point where teams could compete safely and competitively this spring.

“It was challenging training because they had to have their masks on and it was very difficult to train hard, but we did it,” RowAmerica Rye club director Marko Serafimovski said. “There were some ups and downs, but our kids were mentally strong enough to handle everything, primarily since they knew what the end goal was and that was to do well at youth nationals.”

Though the early May New York State Scholastic Championships were not held, the New York State Invitational Regatta took place May 21-23 on Fish Creek in Saratoga Springs, serving as a de facto state title regatta.

The USRowing Youth National Championships were held in Sarasota, Florida, from June 10-13, and featured over 2,500 rowers from over 180 clubs. RowAmerica Rye sent 19 crews to nationals, medaled in eight events and made the finals in three others. The club was the most decorated in the nation against fields that featured an average of 30-35 boats. Serafimovski said the women’s eight-plus that took second was in the most competitive category and noted the team also took third in the four boat.

Though the club’s enrollment was down a bit due to COVID concerns, that didn’t stop the smaller group from achieving more than it has since the club was founded in 2013.

“Our coaching staff did a really good job of constantly reminding the kids what they were there for,” Serafimovski said. “I believe we were a great support in terms of everyone had a hard time — kids, coaches, everyone — but we were able to find ways to keep the kids moving. For a lot of seniors they didn’t have anything to lose. They didn’t race in 2020. A lot of them missed being on the top of the podium for that year, so it was a job unfinished for them, and they were also looking to get recruited.”

The Scarsdale rowers certainly stood out from the pack.

“Arden Costello started rowing a little bit late and then COVID hit, so she didn’t have much experience racing,” Serafimovski said. “She was just happy to be out on the water to do her best. She ended up becoming a national champion in the coxless four. Clara had a clear goal of making the podium and they got second by a couple of seconds. Willow was a returner from the 2019 four that won the Head of the Charles. It’s just a good mental approach to everything. Every day they did a phenomenal job. A lot of kids used rowing as a filter to get through the last year and a half.”

Serafimovski said Hochberg will row at Dartmouth, Weller at Georgetown, Costello at Fairfield.

“I think there is a bright future for all of them and Willow could even join the team at her college,” Serafimovski said. “These girls are driven and you don’t have to push them hard to work hard. I believe they are going to make top boats fairly soon and I can see them rowing the next four years. They’re already back in the gym at the boathouse and they’re training on their own. There’s a chance we’ll see them on the podium at the college level. I’m a big fan of all four girls in terms of their work ethic, in terms of what they’ve done for them and what’s in store for them.”

Scarsdale High School again entered rowers in the PCRA program this spring, though many compete with PCRA year-round. Arovas has only been rowing for a year. When the pandemic hit she decided not to return to the Skyliners synchronized ice skating team due to all the restrictions. A friend suggested she might like rowing and last summer she did the PCRA Learn to Row program and found her new calling.

With new PCRA girls coaches Greg King and Rachel Gabbay this school year, it was a getting-to-know-you period, which worked well as Arovas was new to the sport. She took to rowing on the water in the fall, but once she moved back to her ergometer rowing machine at home over the winter she realized just how difficult the sport was. However, by the end of the winter she was meeting what she had originally thought were “unrealistic” goals her coaches set for her and she was well-prepared to hit the water once again in the spring.

“When I did my final erg test at the end of the winter I hit my goal, so that was one of the moments I realized I could be good,” Arovas said. “Then when they started placing us in boats according to our ability that’s another moment I realized where I stood.”

At that time the coaches were constantly moving rowers between boats to find the best fits and it wasn’t really until the NYS Invitational and nationals that things became solidified. Arovas won gold at the Mid-Atlantic Youth Championships and the NYS Invitational in the under-17 eight-plus and under-17 four-plus boats, respectively.

“I kind of eased into it,” Arovas said. “The fall was not as high intensity as the spring and summer. Because the coaches were new they were trying to get used to the program and trying to get to know everything and get to know the athletes and figure out where we were as a team and what we knew and what we didn’t know. There was no racing in the fall, so we didn’t have to worry about that. The fall was more getting us up to speed, them teaching us and figuring out where we were as a team.”

Once the spring races and scrimmages started, “Everything quickly escalated and became very intense,” according to Arovas.

Being fifth in the country in the four-plus as the stroke was “surprising” for Arovas.

“Going into states we had never raced our boat before and we didn’t really know what to expect,” Arovas said. “It was very surprising even at nationals. No one, even our coaches, knew what to expect because of COVID. As the week went along at nationals we kept upping our expectations. We surprised ourselves each race with how well we were doing. It was a shock to us. We went in one race at a time, just looking to get out of time trials, and placing fourth in our time trial was a big moment realizing we could actually make the finals. We were a young boat with a an eighth grader and a freshman.”

The team now has higher expectations heading into youth club nationals this month, in addition to next year when Arovas moves up to the under-19/youth category.

“This helped us see what we’re able to achieve in the future,” Arovas said. “Now we’re going to push ourselves even more to make it to the top three.”

Arovas’ skating background helped her with rowing in different ways. She had a strength and balance base to build on, but she still had to build leg strength for crew. Then there was the team aspect, which is what she loves about both sports. That was an easy adjustment.

“For me the hardest is the erg workouts because erging is very painful,” she said. “You try to push yourself to get the number that you want, and when you’re done you feel a sense of accomplishment. It’s a sport where you get out of it what you put in. The weeks between states and nationals were very intense with erging and hard days in the water, but coming out of that the way we did you feel a sense of accomplishment knowing you put your all into it and you did everything you could to get that result.”

Arovas has high hopes for the future, as does the Scarsdale contingent of the PCRA team, with a host of young rowers this past spring. Scarsdale also brought in a new coach to the staff, Deirdre Reid, who has been a human resources personnel assistant in the district since 2015. Reid did not return requests for interviews this spring.

Reid came on after the retirement of two-time coach Bob Stanson, who had coaches like Stacey Wierl, Alex Greenberg and Ken Raff in between his tenures.

Reid has experience rowing at PCRA and her daughter rowed there as well, according to athletic director Ray Pappalardi.

“We contacted PCRA and talked about it and they were really excited because she has a background in rowing,” Pappalardi said. “I believe she’s the first person with rowing experience going in from Scarsdale.”

Pappalardi said he and Stanson used to have a daily 7 a.m. phone call to discuss the program, but the conversations with Reid were different because they were “more directed at rowing,” as past coaches were focused more on team fitness than coaching the sport on the water.

“The conversations with Deirdre are slightly different,” Pappalardi said. “They’re a little more engaging, they’re more about what’s good for kids with their development in crew more than the management and organization of the program. It’s shifted a little bit and become more focused on rowing skills and development of the program at the high school and what’s best for the high school program than what’s going at PCRA the club.”

Crew has always been a tough position to fill in terms of familiarity with the sport, so Pappalardi hopes to see Reid stay on board.

“My hope is we have the continuity there to really improve our program,” he said.