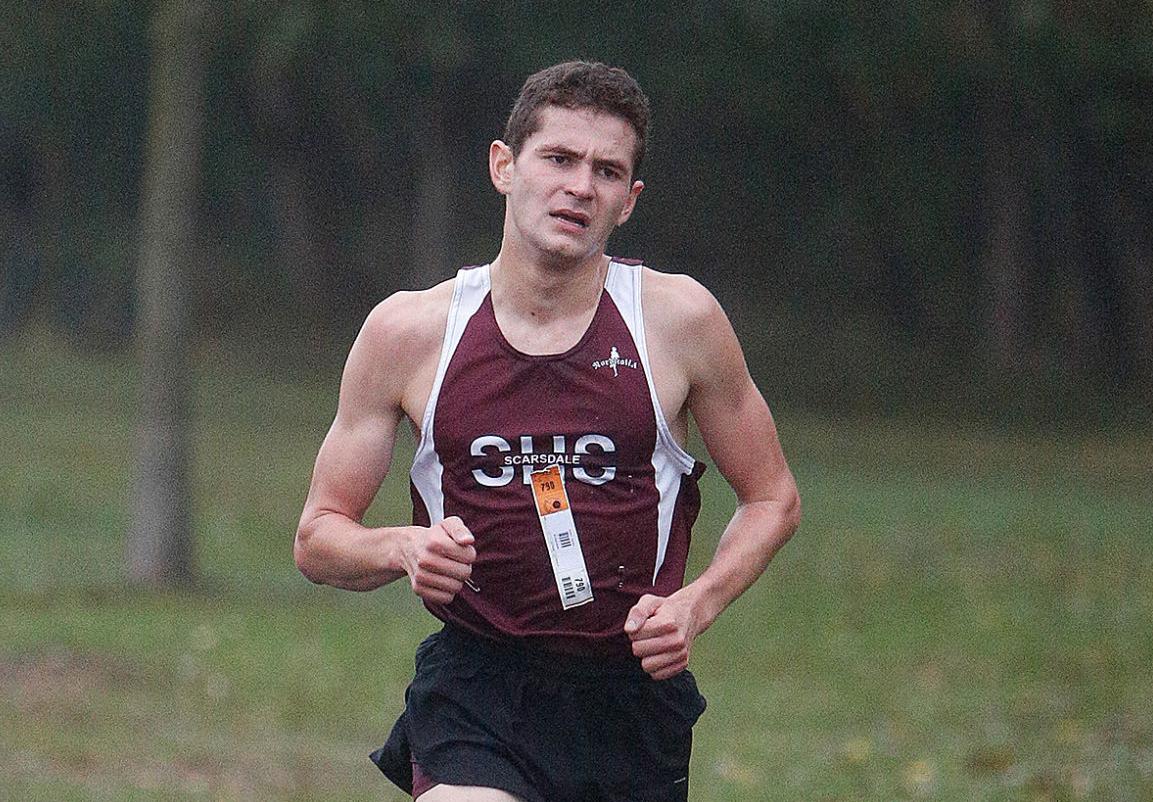 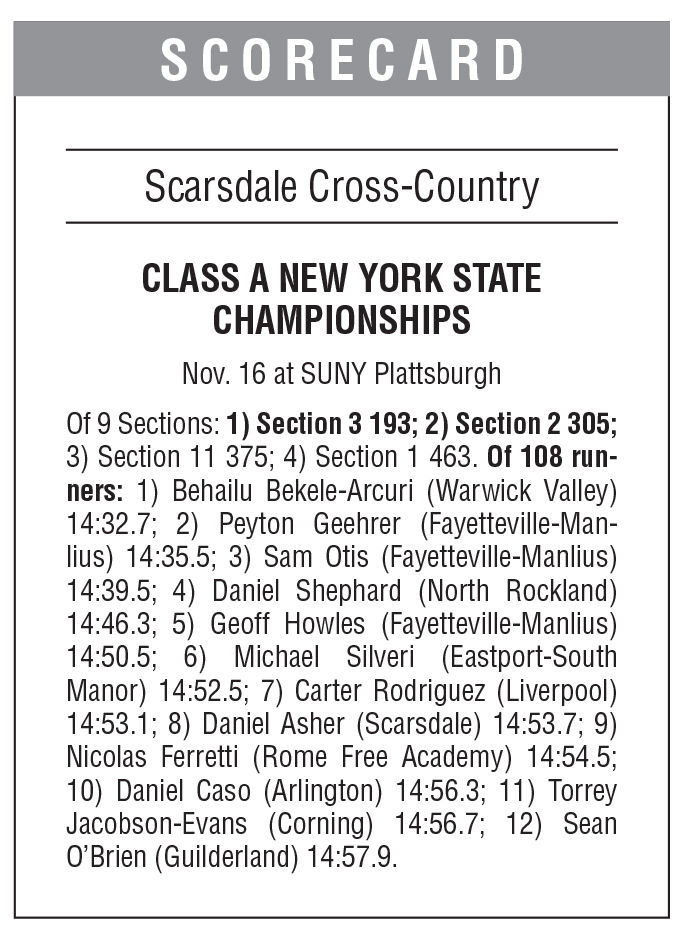 Dashing through the snow,

In a race against Class A,

Spikes to help him go,

Scarsdale senior Daniel Asher had the race of a lifetime on Saturday at SUNY Plattsburgh in the Class A New York State Championships.

“He knew that this was going to be a race he wanted to finish well up there,” Clark said. “He had a breakout run. I was flabbergasted.”

The last top 10 finisher Scarsdale had at states was future Yale runner Julian Sheinbaum, who placed third as a senior in 2007. Greg Crowley, now at Dartmouth, won the Section 1 title as a junior and took 18th at states, but senior year he had mono and missed most of the season, later taking 32nd in the state in a still weakened condition. Last year, Andrew Levy placed 85th at states for Scarsdale.

Not only did Asher place, but he jumped Daniel Caso of Arlington, Jason Markopolous of Mamaroneck, Tristan Marine of New Rochelle and Joseph O’Brien of Horace Greeley, all of whom bested Asher at sectionals. Not bad for the fifth and final individual qualifier.

“It was amazing, the best feeling I’ve ever felt,” Asher said. “I was so close to Daniel Shephard, who had been destroying me by 30 seconds every race. He was ahead of me by seven seconds. That was the biggest confidence booster ever. I’m really excited for Federations this week and I’m going to do NXR [Northeast Regional].”

Plattsburgh had 6 inches of snow that packed down to 3 inches and remained on either side of the cleared course, though the path was still covered in ice.

“They got most of the snow off, but there was ice,” coach Rich Clark said. “The macadam areas were really terrible because when they went over them and plowed they broke up some of the macadam so it was uneven. Friday when we went over the course it was brutal — it was windy and probably 20 degrees. Saturday the wind had stopped, but Daniel ran when it was about 11 degrees.”

Asher used his long spikes, 3/8 of an inch to help him from slipping and he had no issues with the terrain.

“With all the snow and ice I didn’t want to slip,” Asher said. “You knew that was a risk. We ran it the day before and they altered it a bit the day after due to the conditions, so that was a bit nerve-wracking, but I ended up loving the course. It was not as much hills. I’m better where it’s more flat ground. It wasn’t slippery. There was ice, but I had my spikes in and I didn’t slip.”

Clark was able to slip and slide his way to different parts of the course to see how Asher was faring and he was never worse then 15th at any time. “He was just flying,” Clark said.

Asher went out hard because he knew the start would be narrow and tight due to the snow.

“I tried to stay there with the top guys,” Asher said. “I was probably 15th in the beginning about a mile in. As we progressed I wanted to try to move up. I was feeling good and I thought I could hold it. I moved up and kept my eyes on the people in front of me to try to pass them.”

The shock of his finish is still fresh for Asher. “My season had been going OK, not how I wanted it to,” he said. “I was just surprised how I felt during that race. I didn’t have any pain during that race. I think that was from all the adrenaline I had built up.”

Clark said that waiting for a runner to have a well-deserved, hard-earned breakout race isn’t easy, but when it happens the reward is worth the struggle.

“He went in there as a businessman, knew what he had to do,” Clark said. “No matter what, he wasn’t going to get distracted and he executed. I’m so proud of him… When he went out he was just flying. There wasn’t a grimace on his face and I knew he was feeling good. We’re going to hopefully do the same thing at Feds.”

Asher was injured last summer and last winter, slowing his times and his progress junior year, but he’s been on the ball since the spring and had his best summer of training and mileage ever coming into senior year. Though he didn’t meet what he had called some of his “crazy goals” for the regular season of cross-country, all of that is now coming to fruition.

“I had a mental barrier or something, all the stress,” Asher said. “Going into the state meet I had no stress at all. I was just going to race and do the best I can. That’s important. You shouldn’t stress yourself.”

Asher credited his coach’s training program and his teammates for pushing him to the front of the pack. “I don’t think I would have been able to get as far without my teammates,” Asher said. “They pushed me in the workouts. In some of my races I was working with Jake [Coleman] and we’d be battling each other and that really helps to have someone with you.”

Scarsdale earned the 14th of 16 team spots for the Federation championships this weekend back at Bowdoin. Scarsdale qualified last year, but the meet was snowed out. The only other time the Raiders were chosen was 2007, where, as the 16th seed, Scarsdale ended up placing sixth.

“I love running with my team,” Asher said. “I don’t want it to just be me. It’s not as fun in my opinion. I told them to stay with me and they’ll have a great race. If they stay positive they will do well. That’s what I did and it helped me.”

Clark is always excited when his team gets well-deserved recognition. “This is the frosting on the top of the cake,” Clark said. “There’s no pressure. They just go and run and have fun.”

For Asher, the new mindset has him seeing things with complete clarity.

“I remember saying to myself that if I didn’t qualify for the state meet I’d have to end my season early, take a break and go right into track,” Asher said. “Now that I did so well at the state meet I want to keep pushing it and setting new goals for myself.”