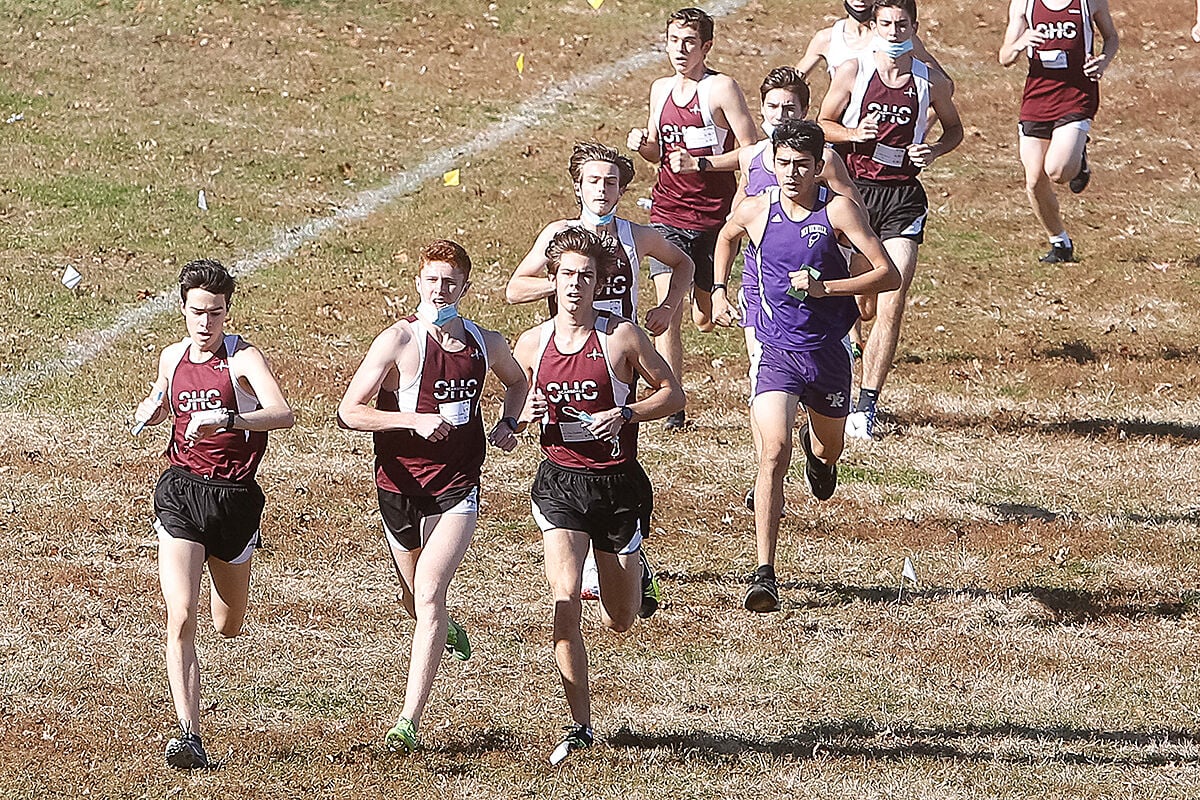 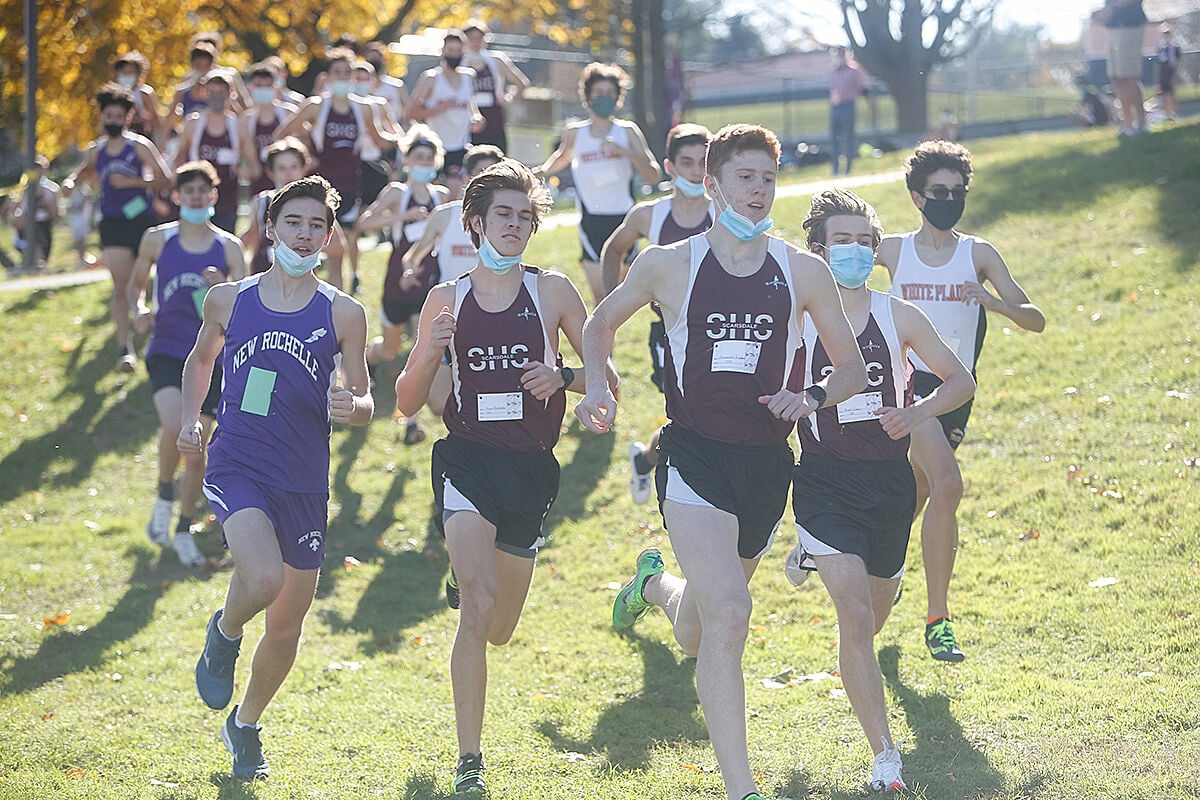 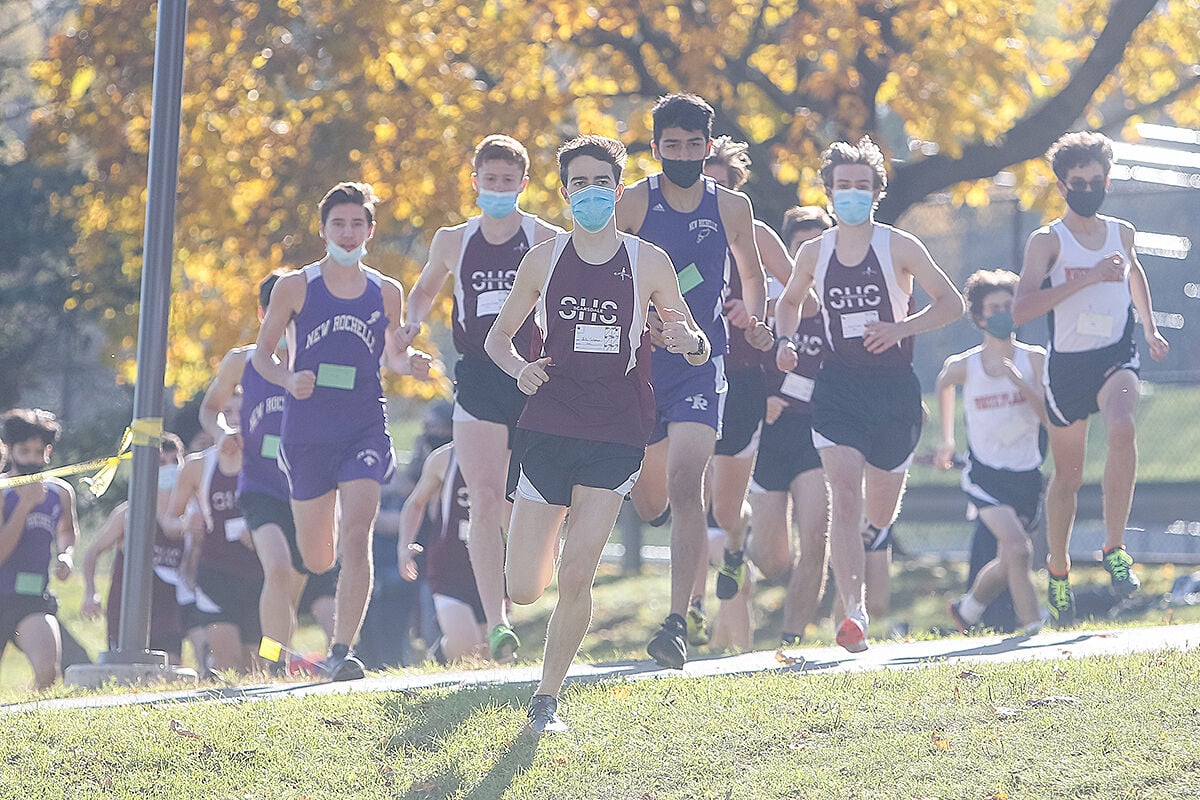 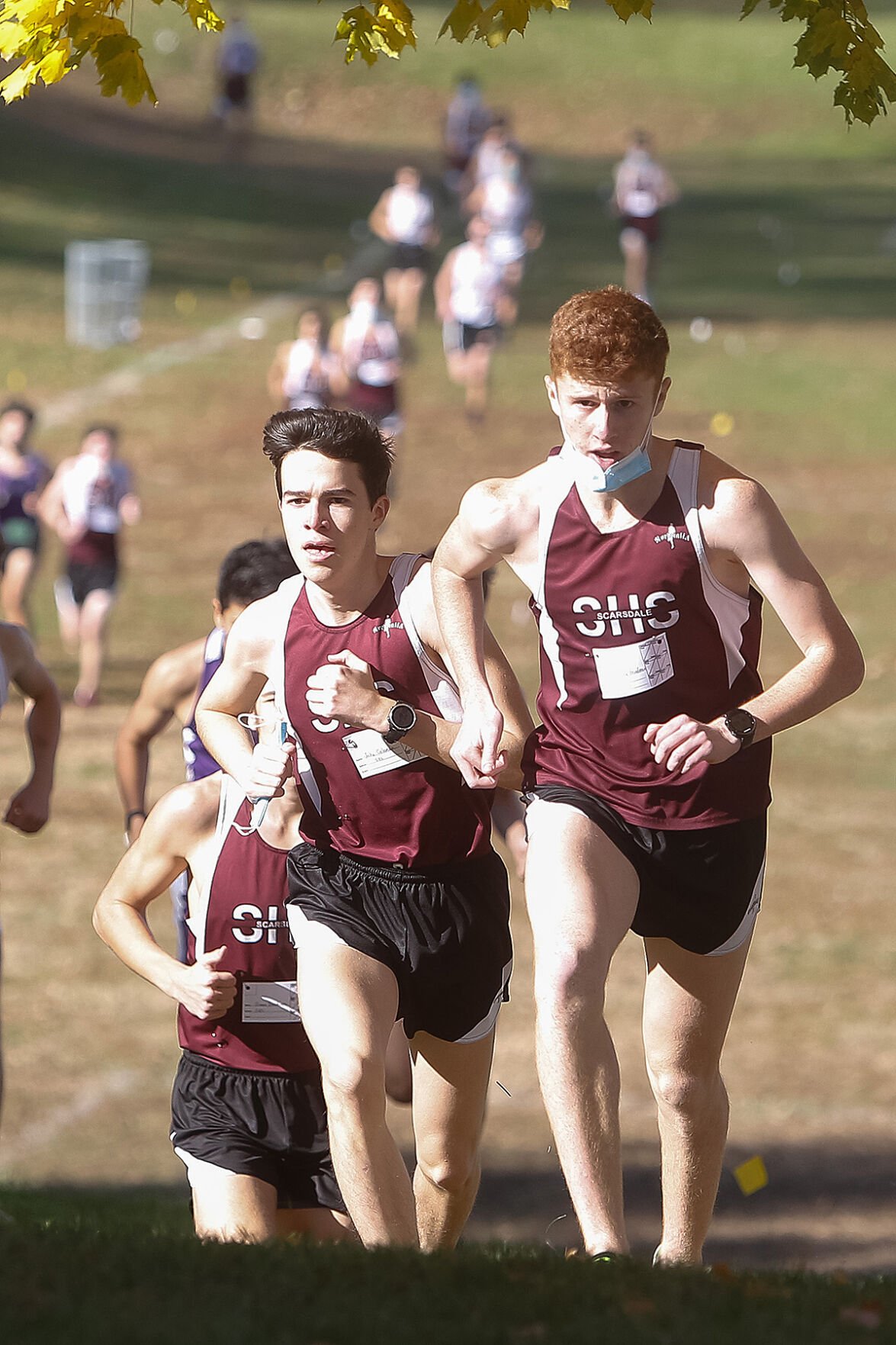 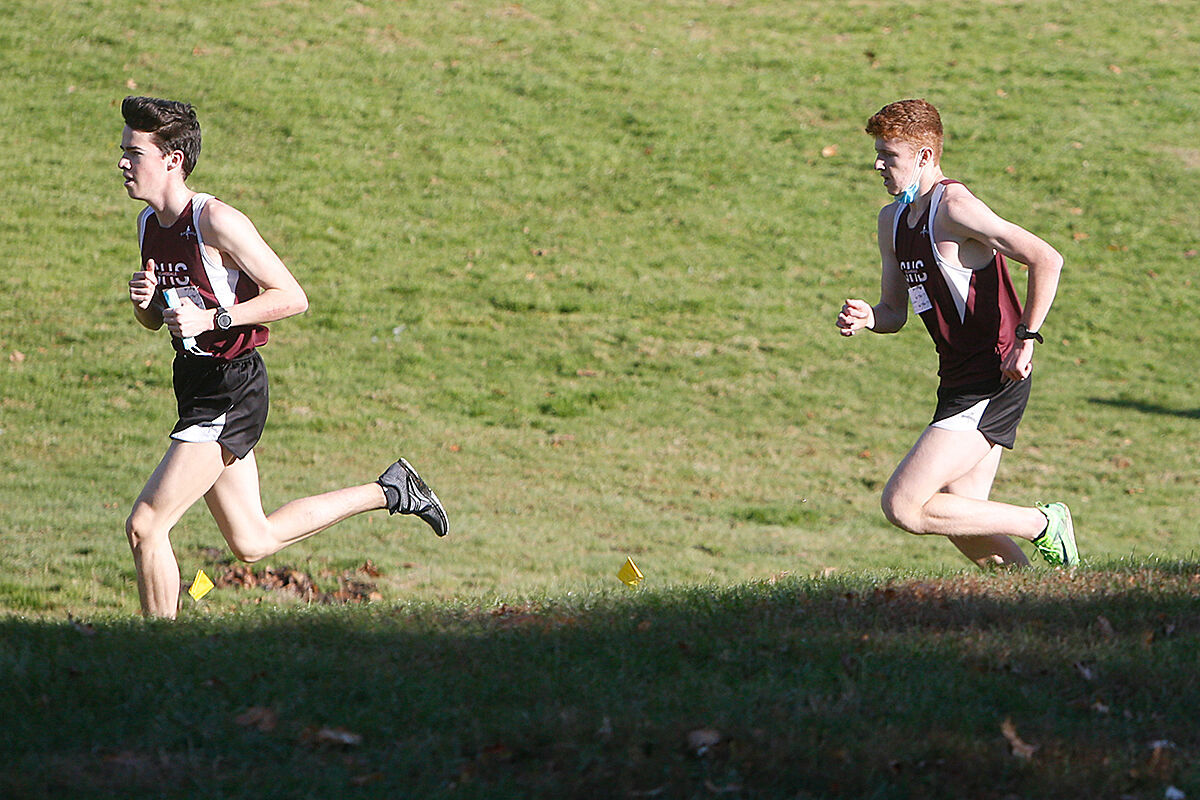 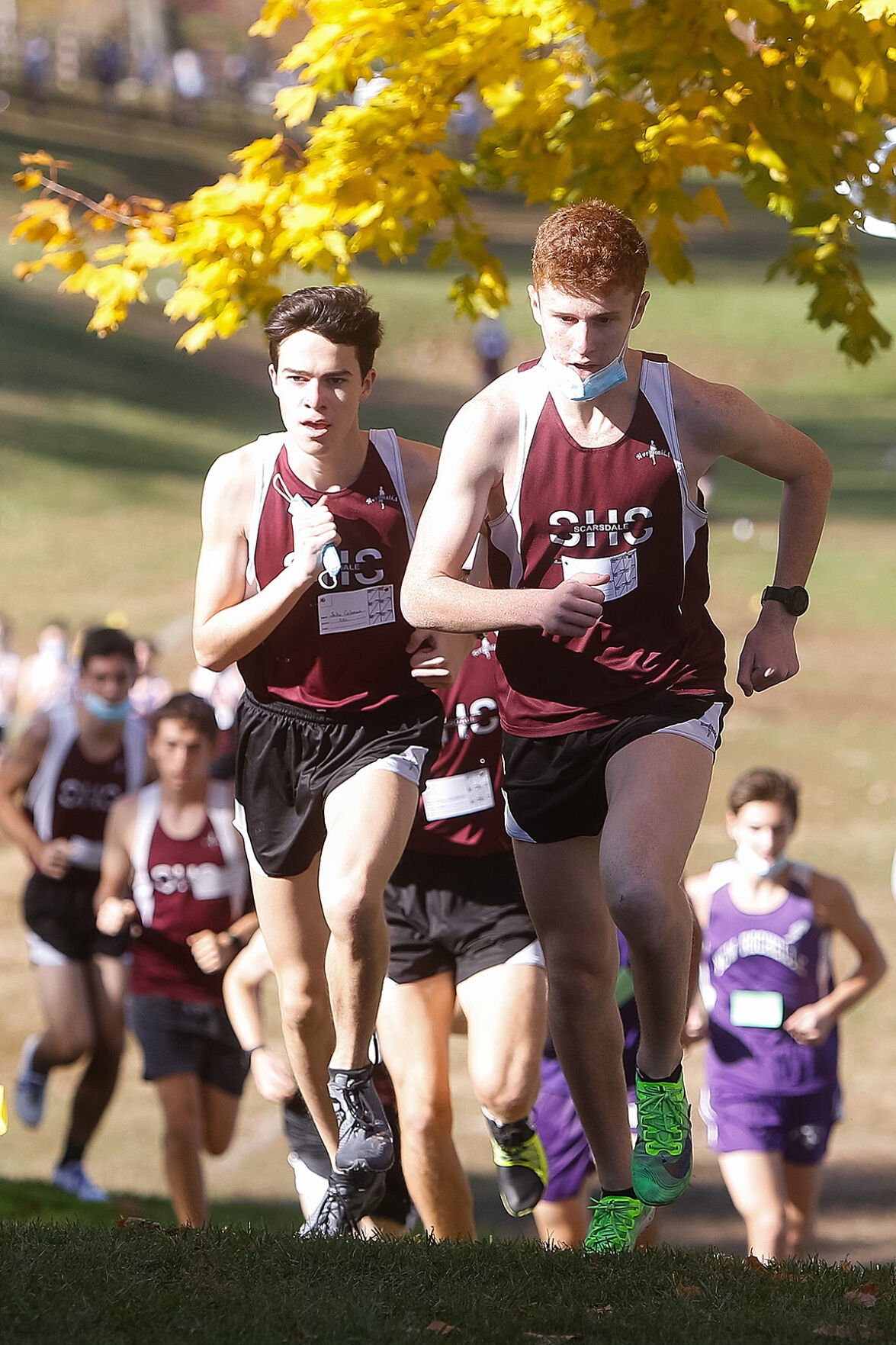 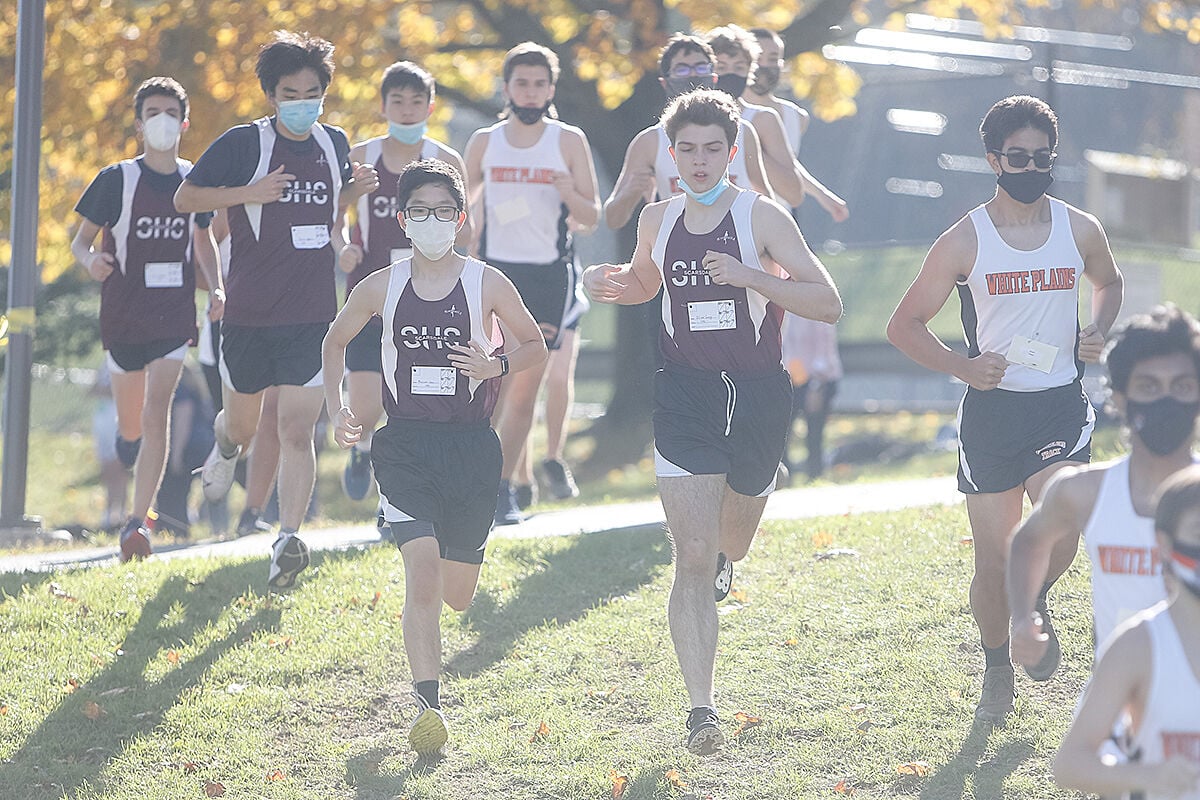 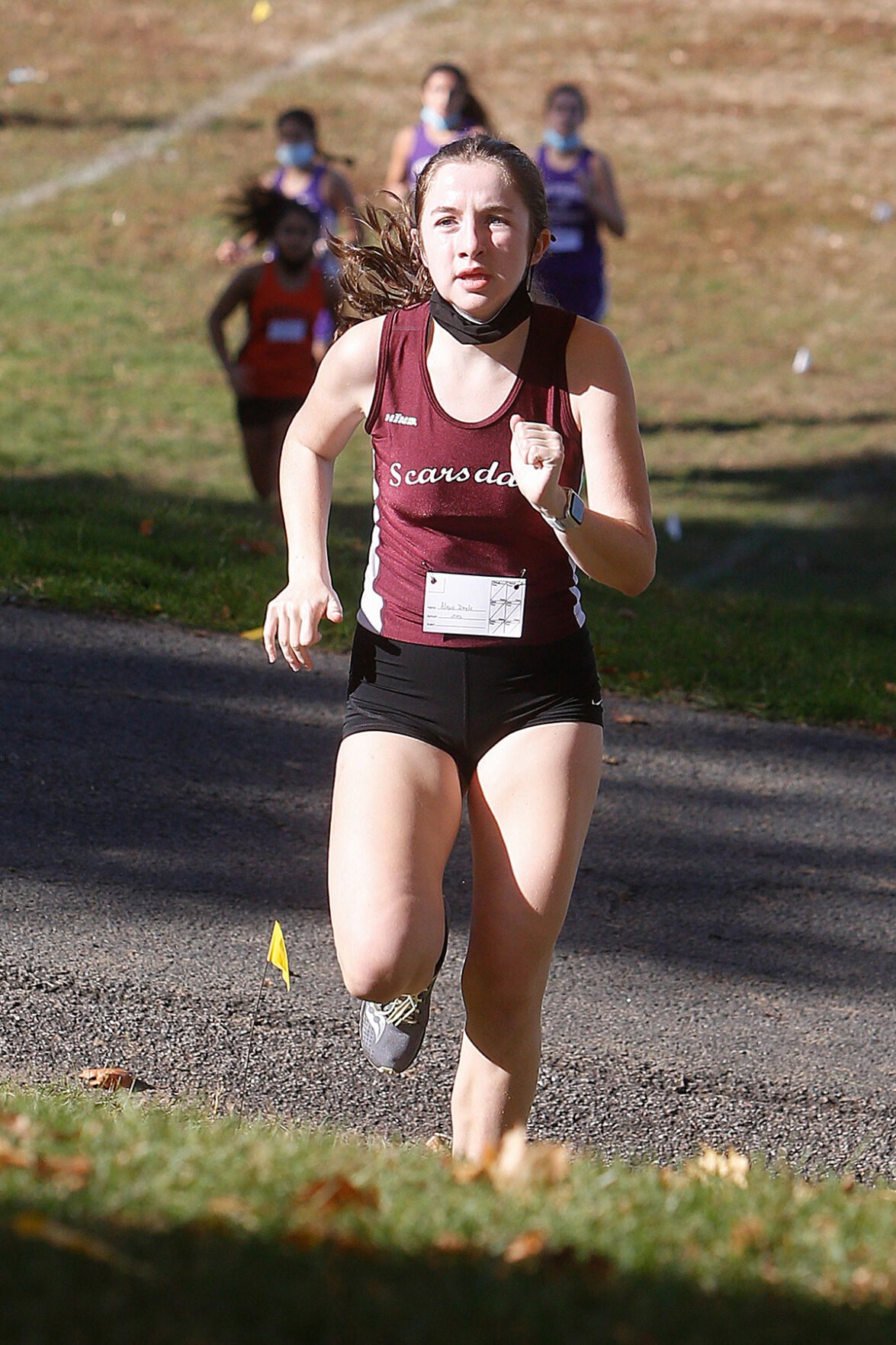 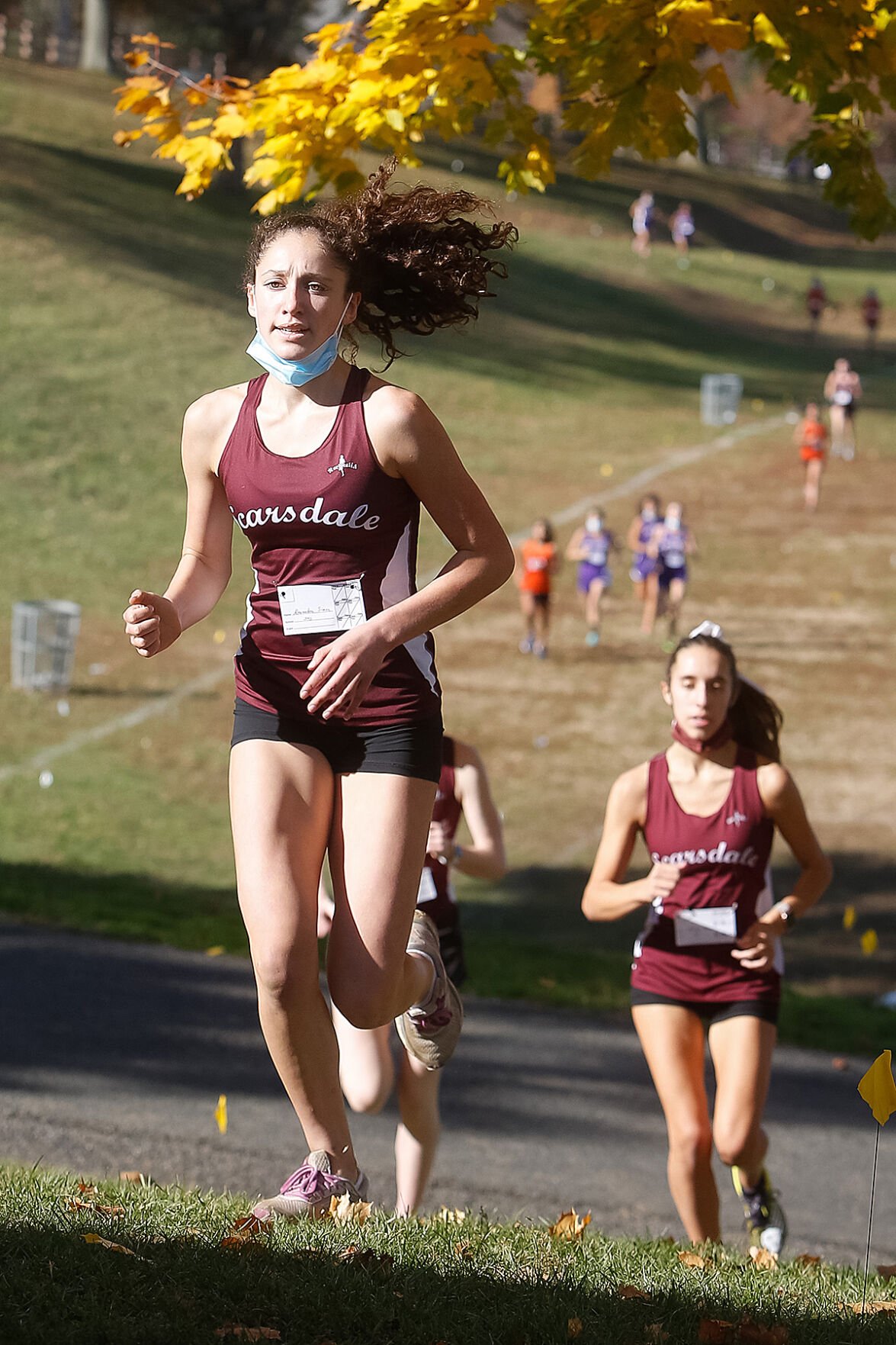 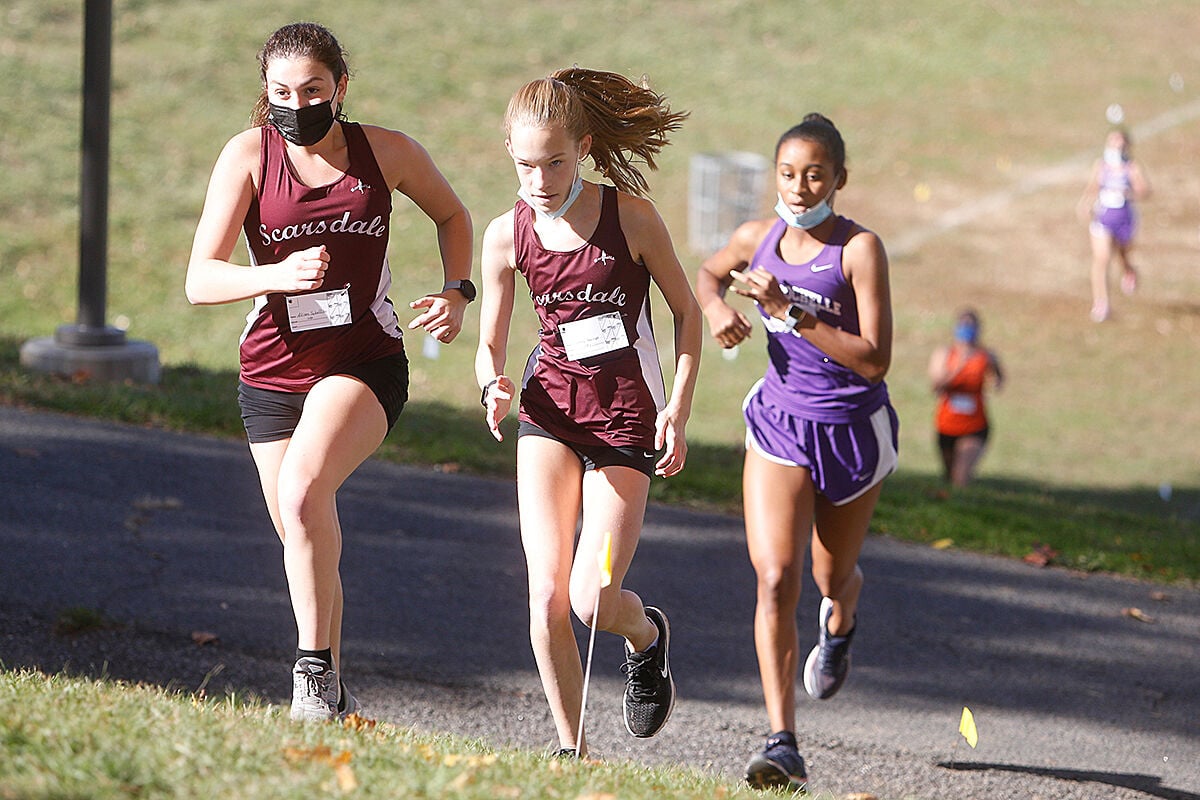 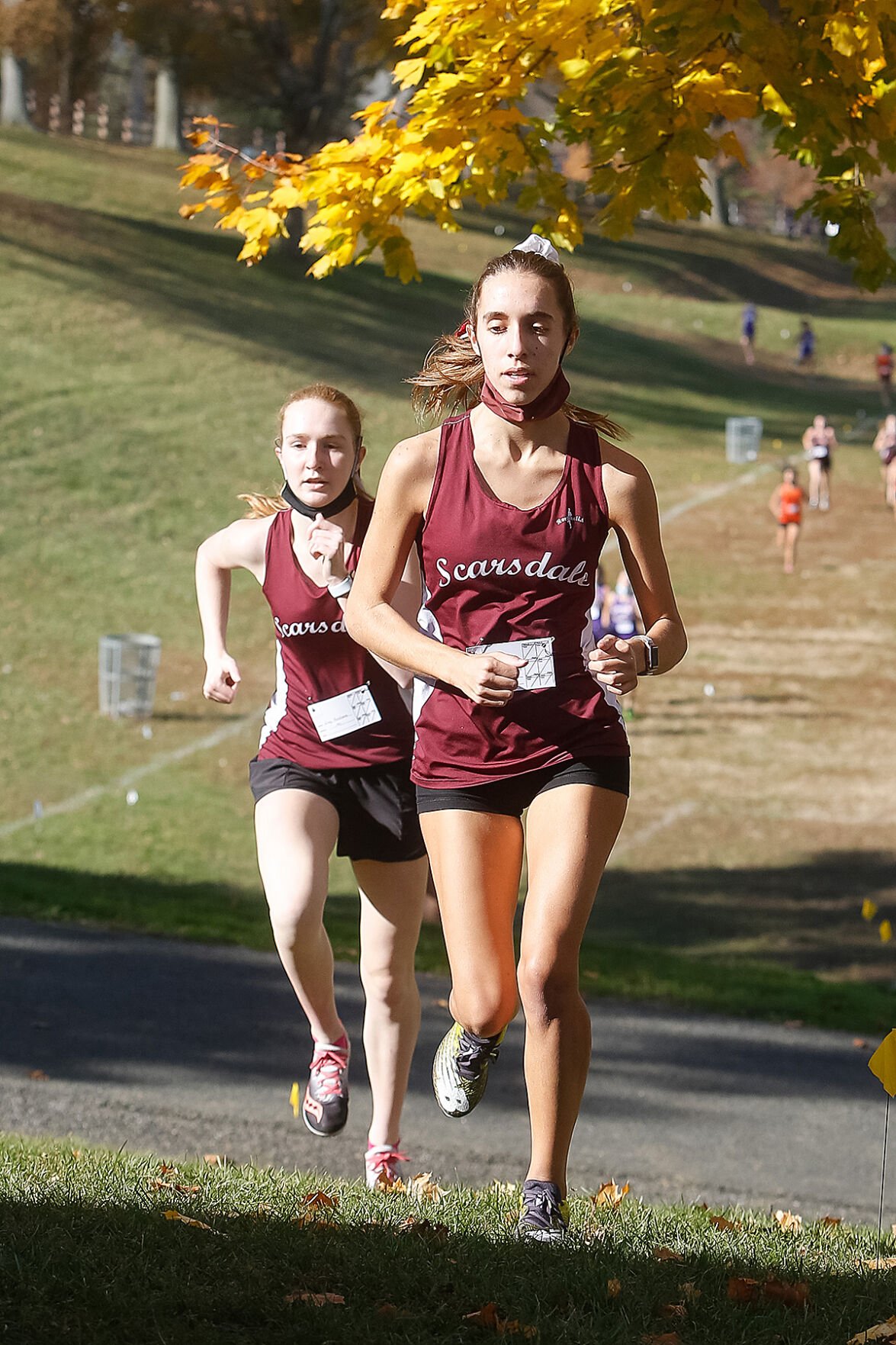 After opting not to return for soccer his senior year after breaking his fibula last year, Shan Daniel was told that joining the Scarsdale cross-country team would be great for his track 800-meter training. Little did he — or anyone — know the sprinter would quickly make an impact as a distance runner.

“Shan Daniel really started back,” coach Rich Clark said. “He was like my ninth man or so and he’s moved up to my fifth man. He’s doing a lot of his training on his own for the 800, but he comes to practice and works hard.”

Daniel has been doing track since freshman year and focuses on the 800 and mile. Prior to this fall, his only long races had been the Scarsdale spring 4-mile run as a freshman and sophomore.

“This is entirely new to me,” Daniel said. “I’ve done distance training on my own, but it’s a lot more adapting my race strategy from the 800-mile to the 5K course. I’ve been talking with my coach how I can run races to use my speed to my advantage and make up for my lack of endurance.”

As the fifth runner, Daniel figures into the scoring for meets, so adding him to the team this year was a win-win.

“I’ve been mostly proud of what I’m doing,” he said. “I didn’t expect to have any success here. I’ve never been really great at 5K. I’m nowhere close to the pace I’m supposed to hit at this distance. It’s been a fun challenge.”

While cross-country meets don’t translate down to the sprint/middle distance events, the workouts will help Daniel going forward. “I think it helps me be in shape,” he said.

Scarsdale has run four times this season and has one home meet coming up Tuesday against Edgemont and possible Eastchester at Scarsdale Middle School, and the regional meet at Milton the following weekend. Coach Clark was hoping to have a Westchester County Championship race — the boys are defending champions — but the way the section is split up that isn’t happening.

“I thought it could be, but the way BOCES organized the regions all the schools I am with are AA and A in Westchester, but some regions have Westchester schools, so we couldn’t have a county meet,” he said. “Rockland is lucky because all of their nine schools are in the same regional so they can count it as a county meet. If all the races were the same day maybe we could do it that way, but I don’t think they’re all in the same day.”

The Raiders have lost twice to rival Mamaroneck, but competed well in small meets without the usual large invitationals the team is used to having throughout the season. It’s been hard to gauge how the team matches up with others.

“Even though we lost to Mamaroneck this year, we are a good team,” Clark said. “These kids have been training almost uninterrupted since March 9. I told them to take a few weeks off in June and they did, but some of them went right to Colorado in July. They are in excellent shape and it’s just sad they won’t have the chance to end the season with the way it normally would end with them getting some recognition.”

Seniors Jake Coleman would be a contender for the New York State meet if there was one, and Alexandre Friedman would have made a push, too.

“With the warm weather and the wet leaves and the air it just reminds me of early cross-country and I long for that, but it’s just not the same,” Clark said. “It’s not the same at all. We started late. We had to be very careful, we were in cohorts, so it just hasn’t been the same. I’m grateful that out of 10 levels of happiness for the season I’m probably on the 10th. I’m happy the kids are running, happy they are meeting together and socializing a bit, even with social distancing. But it’s nothing like the excitement of going against Arlington or Mamaroneck for the sectional title and then going on to states.”

The girls have a new No. 1 as Natalyn Kapner, a junior, has emerged as the top runner.

“Since I know what it’s like to be on the team this summer I focused on training and putting the work into it because I didn’t want to lose what I had started,” Kapner said. “Knowing what types of workouts to do helped me keep the normalcy in the training.”

Kapner wasn’t an early standout as a freshman like senior Alexa Doyle and sophomore Alexandra Simon were, but that didn’t stop her from training hard and making great strides.

“She was mature for her age and matter of fact she wasn’t one of the best runners,” Clark said. “She was just learning about it and she was solid in the middle of the pack. Now she and Alexa are solid up front. They both have the attitude that when trained enough they won’t give in. It’s a winning attitude.”

Running with the top girls on the team since freshman year helped give Kapner the push she needed.

“I feel like I’ve definitely improved with my times,” she said. “I’m a lot faster than last year, though it’s hard to judge on different courses. I feel like I’m in better shape and I can handle more miles at a faster pace.”

“During the race she’s focused, focused, focused,” Clark said. “The poise has brought her through. Alexandra is a great runner in her own right, but I think her being a sophomore and Natalyn being a junior, that difference in experience has really set her apart in that she can focus much more.”

As a team, the girls rival the boys. “The girls, basically the same thing and they’ve been training hard,” Clark said. “They’re two pretty equal teams. Rarely have we had that where both boys and girls teams are of an equal caliber in their own gender and they are. They put it together. They almost beat Ursuline.”

The girls have also been navigating through a tough COVID-19 season and, according to Kapner, have been “trying to make the best of the situation.”

“We’ve had four meets and even though they’ve been smaller it’s just good to get out there and race,” she said. “It had been so long since our last track races in February. The team is definitely smaller, which is different, but at the same time you get to know everyone and there are some younger runners there who will be the future.”

The larger regional meet will be a nice way to close out the season.

“We want to do as well as we can, trying to pass people from other teams, trying to work together, which is something Scarsdale is big on,” Kapner said. “We try to pack run and that helps a lot. We’re so used to that in practice, sticking together, pushing each other to finish. We definitely have a lot of potential to be very good.”