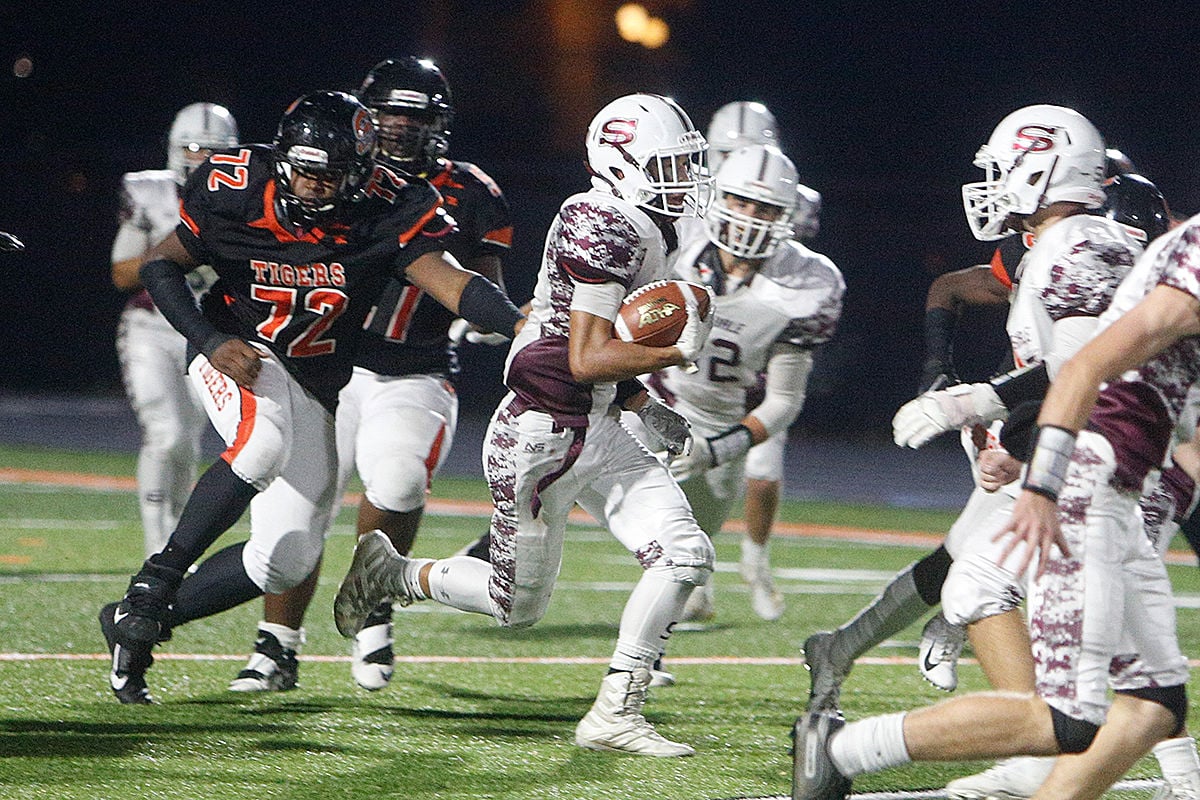 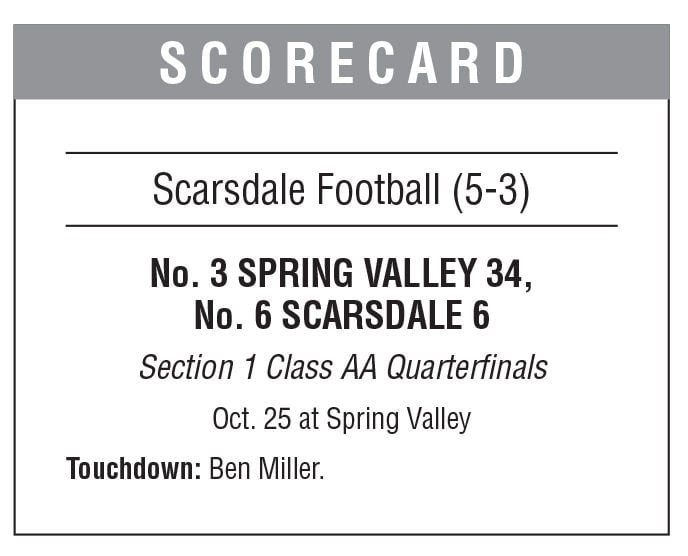 A 6-0 lead and a 6-6 halftime score was everything the Scarsdale football team could have hoped for in the quarterfinals of the Section 1 Class AA tournament at Spring Valley last Friday night.

After all, the then 5-2 Raiders were coming off a 1-8 2018 in which the team didn’t make playoffs for the first time in nearly a decade.

“This was the turnaround year,” senior captain Sam Feldman said. “Last year we went 1-8 and that sucked, and we wanted to get this program back where it deserves to be, back where it should be. I think we got the ball rolling and we got some strong underclassmen to keep improving the program.”

While the Raiders were vastly improved — including a final week home win over rival Mamaroneck to make the postseason — Spring Valley took over the game in the second half en route to a 34-6 victory.

“We fought hard,” senior captain Harry Song said. “We could have had some more calls our way and put some more drives in the end zone, but it was a battle the first half. I think we came out of the gates firing. We had a problem with coming out slow. Second-half comebacks was kind of our thing this year.”

It’s an understatement to say the Raiders were not pleased with the Rockland officials in the second half of the game, but they also couldn’t find any magic on either side of the ball.

“In the second half the officials took it away from us right from the get-go,” coach Andy Verboys said.

Still, the Raiders fought until the final whistle, appreciating the magnitude of the game. After all, the lone Raider to have experience playoffs in 2017 was then-sophomore Michael Callahan.

“It was an amazing atmosphere,” Feldman said. “I couldn’t have asked for a better season. I’m grateful it turned out this way. It was Friday night lights, so we couldn’t have had it any better.”

“We thought last season was an embarrassment to Scarsdale football and we knew that the upcoming class had a strong JV season,” Song said. “We wanted to get better every single day starting the day the season ended last year. We came in and worked every single day for this.”

Feldman said “feeling deflated” from 2018 motivated this year’s team. The seniors rallied the juniors and two sophomores to get them ready for this fall.

“The games that hurt us last year were homecoming and the first week against Mamaroneck,” Feldman said. “They saw us lose and what’s impressive about them is they knew how much it meant to us and they saw what we put in, they responded to that and they did the same.”

Verboys was proud of the team for recognizing the opportunity and seizing it.

“They committed right from the get-go,” Verboys said. “They spent all summer double-lifting to catch up for what they had lost. This senior class did what I asked them to do. They’re small in numbers, but they came through.”

The seniors not only focused on the physical and mental aspects of the game, but team unity, too.

“No one was turning on each other,” Song said. “Everyone loves each other. We don’t have many guys, but it’s a great group. Everyone plays hard, everyone plays together and we all love each other.”

Illness and injuries took their toll on Scarsdale’s preparation leading up to the big game, but those who could suit up got out there and grinded it out.

“This is what it’s all about,” Verboys said. “It hurts and the kids are upset, but they learned more tonight than they could be taught in 20 years: how to come together, how to stick together, how to work hard. It was fun to watch. The first half was fun. They kids came out and played.”

This year’s team leaves a strong legacy as the turnaround team.

“They put us back on the map and now it’s up to the younger guys to keep it going again, Verboys said. “The message is we got back there and they left it all out on the field today.”

The Raiders host Arlington tonight in the season finale, looking for win No. 6 on Friday at 5 p.m.

“We want to send off all the seniors that worked so hard the right way,” Feldman said. “We turned the program back around and we want to play our brand of football.”