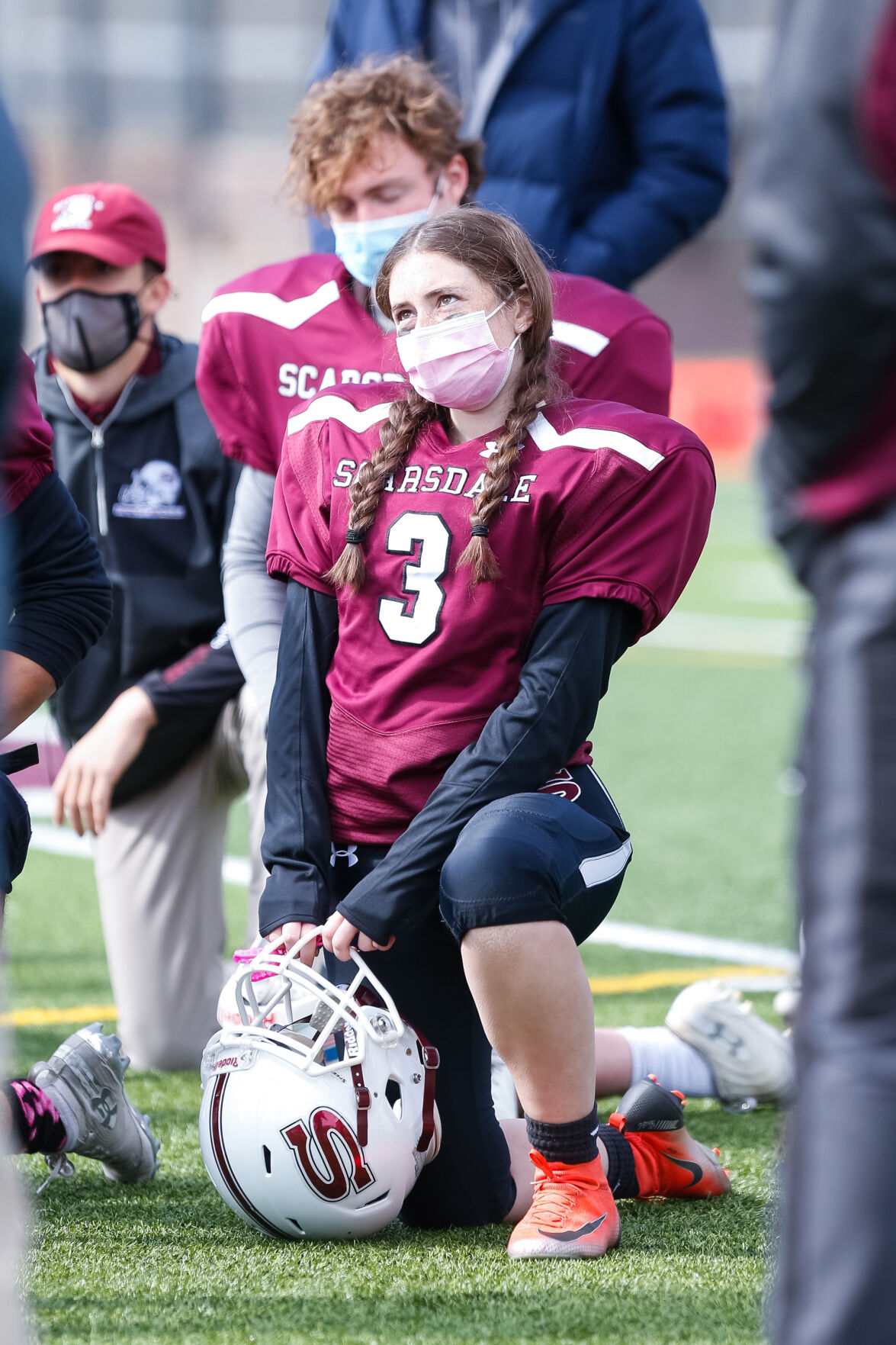 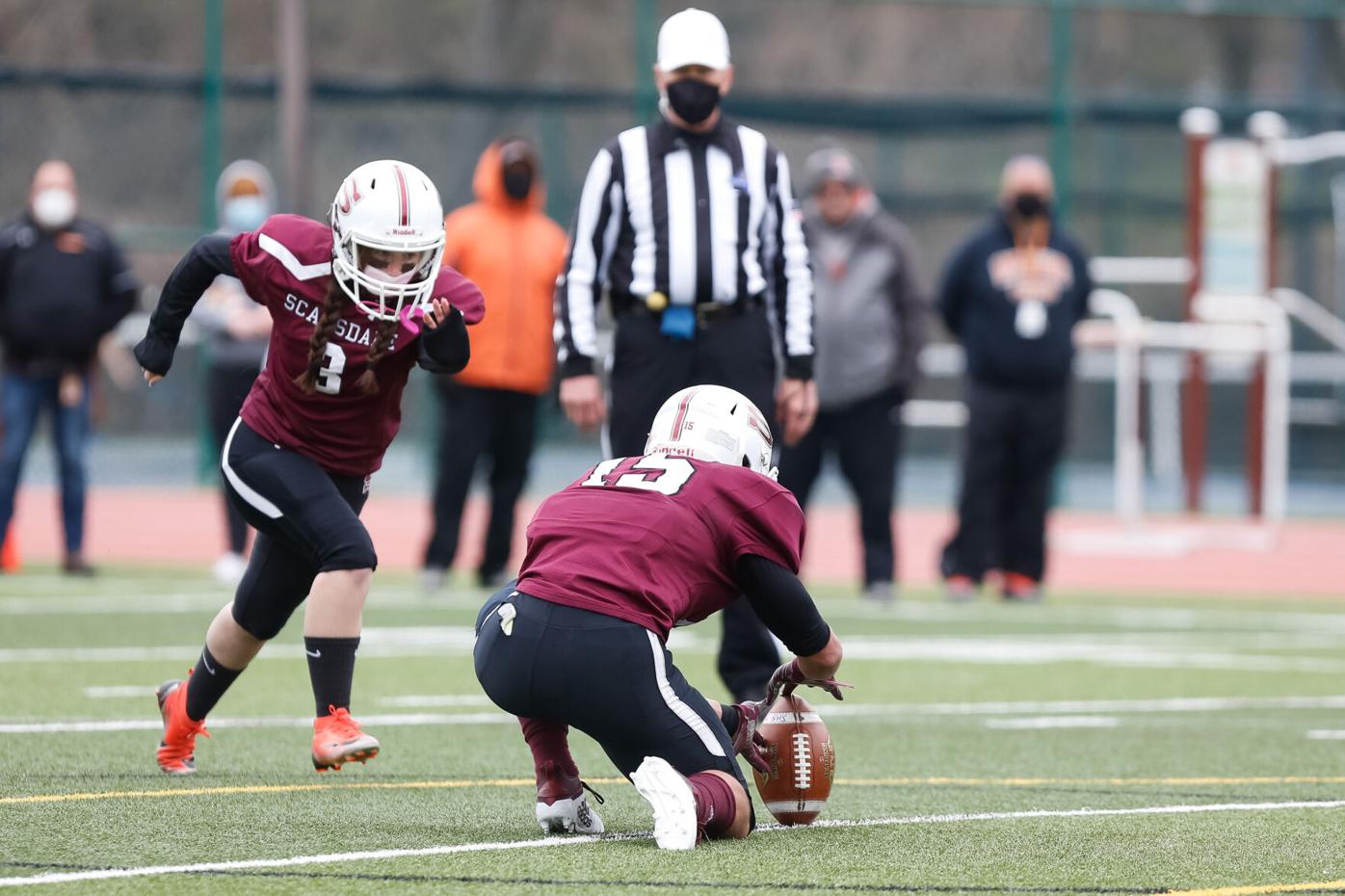 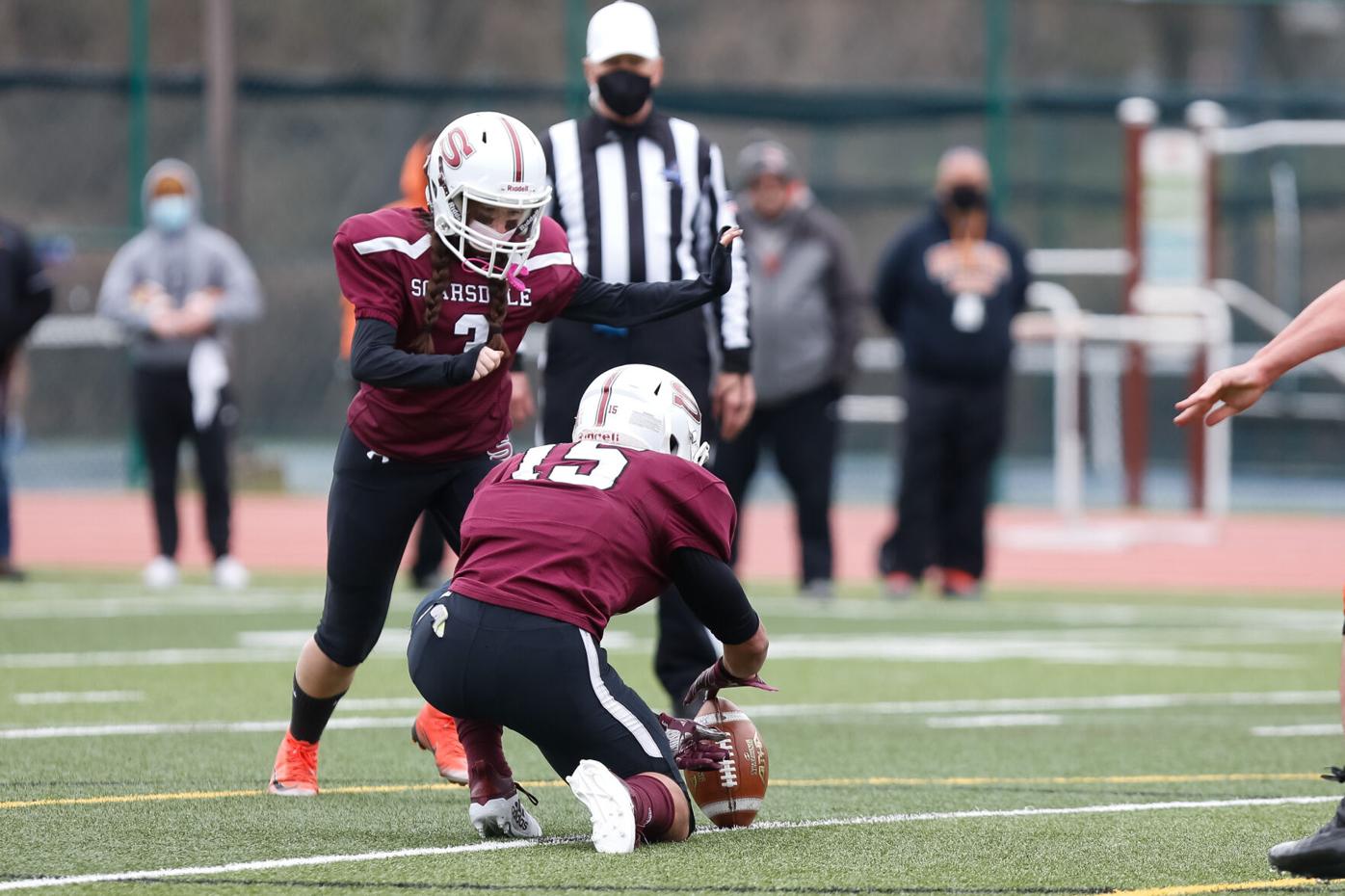 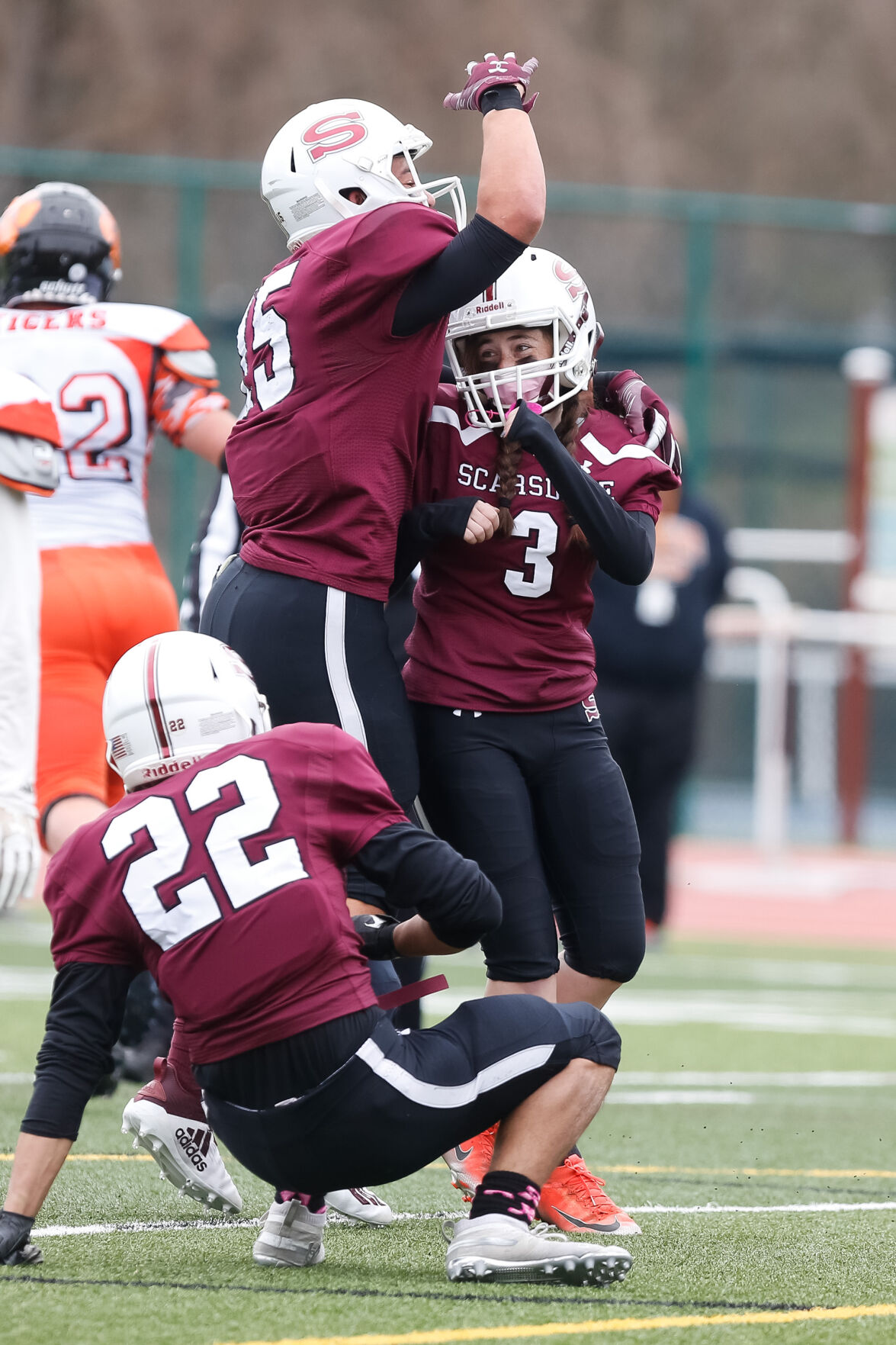 Ben Miller reacts to a successful point after attempt by Ryan Silberfein. 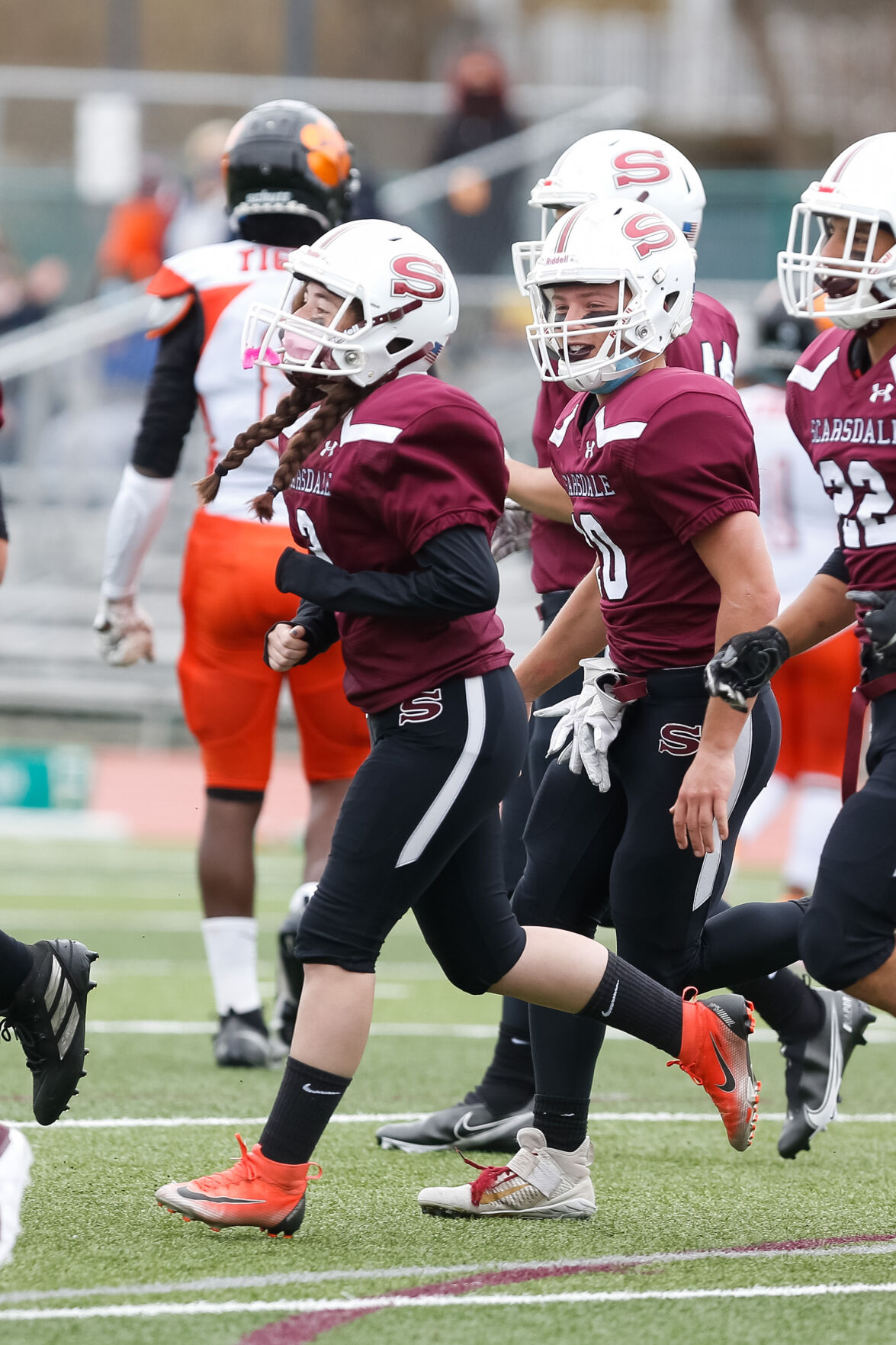 Ryan Silberfein runs off the field after kicking her first extra point. 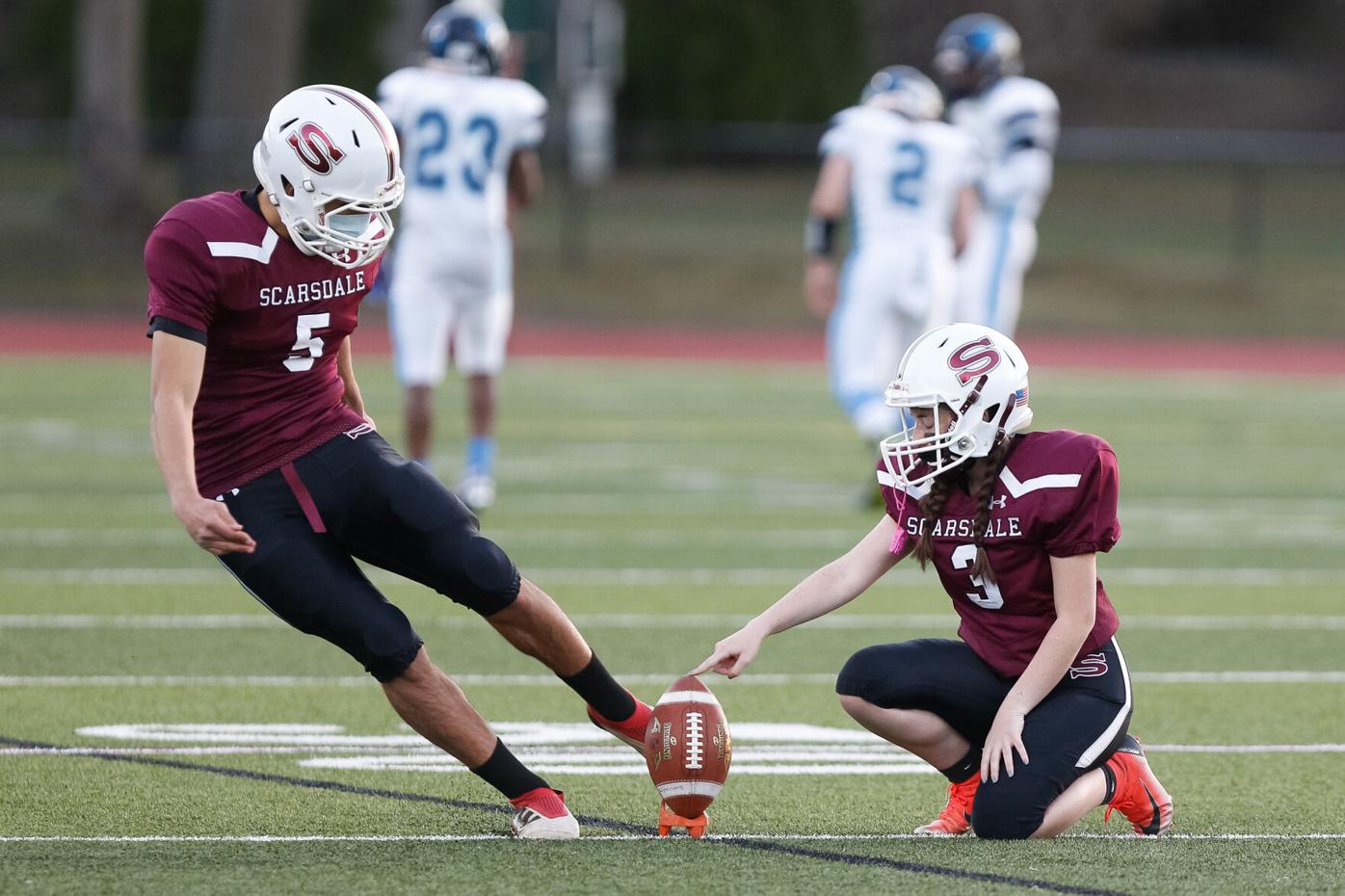 Ben Miller reacts to a successful point after attempt by Ryan Silberfein.

Ryan Silberfein was just trying to help. And by doing so she made some history for Scarsdale High School varsity football.

When junior kicker Bennett Abbe went down with what was thought to be a season-ending injury during the first game of the season against Port Chester, Silberfein, one of the team’s managers, volunteered to pitch in when the coaching staff was scrambling to find a replacement. Silberfein let coach Andy Verboys know she’d give kicking a try in Week 2 if he wanted, calling it “a shot in the dark.”

“I said, ‘OK, lemme see,’” Verboys said. “I couldn’t believe how explosive she was. I was so impressed because we were trying so many different people and everybody says they can do it, but it’s a different mindset. You don’t just kick a ball. There’s a lot that goes into it. You’ve got people diving in front of you. She said, ‘Coach, I can do this,’ and sure enough, she can do it.”

Just two days before playing Suffern on Friday, March 26, Silberfein became the first female to make a varsity football roster at SHS in the nearly 90-year history of the program. She didn’t have a chance to get into that game for an extra point attempt because the Raiders were shut out 14-0, but she did get a chance in Week 3 on Thursday, April 1.

After White Plains opened the game with a touchdown and went for and made the two-point conversion, the Raiders had to counter and did the same following a 90-yard kick-off return by senior Julian Higgins to make the game 8-8. When Scarsdale took the lead on a 21-yard touchdown run by senior Noah Ebner Borst, Verboys shouted, ‘Ryan!’ signaling his new kicker’s chance. “I never even thought twice about it,” Verboys said. “I knew I needed one point and I just shouted for her.”

Silberfein, all 5-foot-3 of her, with her French braids hanging out the sides of her helmet, trotted onto the turf field, got set, watched as holder Ben Miller took the snap, made her approach and kicked the ball over the linemen and through the uprights, much to the excitement of her teammates, and the crowd. With four minutes left in the first half, the Raiders held a 15-8 lead and went on to win 21-14.

“I kind of blinked and it happened,” Silberfein said. “As soon as I kicked it the whole team went crazy. It was nice.”

Higgins was thrilled to have Silberfein cap off the drive. “Having Ryan on the team is huge and we really loved she was able to make that kick today, be on our team and be a part of our family,” he said.

Adding to her nerves, Ebner Borst was supposed to be the holder, but he was hurt on the touchdown play, so Ben Miller, whom Silberfein said is one of her most supportive teammates, took over. After the play he smothered his teammate, who ran off the field with a big smile under her pink mask and with her pink mouthguard, braids flying about.

“Definitely a relief that I didn’t mess up,” Silberfein said. “It was exciting for it to finally happen after all this buildup over the last couple of weeks.”

Besides Silberfein’s natural talent, what stood out for Verboys was the unselfishness. “It wasn’t about her — it was about the team, so they’re excited” he said. “It’s never been about her and that’s what’s awesome. It’s about the fact that she can do this and the kids appreciated that and embraced it. It’s about her will to want to make us better.”

Silberfein loves watching football and playing football with her dad, and flag football is a big event at summer camp. Playing kicker is something she’d always dreamed of, but she never had the chance because she’s always been a soccer player in the fall. Due to high-risk fall sports being pushed to the March/April fall 2 season during the COVID-19 pandemic, she decided it would be fun to be a manager for the football team.

That escalated quickly and Silberfein’s first time wearing a football helmet or pads came the day before the Suffern game. “It’s definitely different, definitely a hurdle when you can’t turn your head as much and you can’t really hear anything either, but you just keep your eye on the ball,” she said.

Getting her paperwork in order to actually be cleared to play took some doing, but all of a sudden Silberfein was a varsity football player. And what she appreciated was that she wasn’t being brought in for a game, but as an official team member for practices and games the rest of the season. Her managing days were very short-lived.

“I had never kicked a football until earlier this week,” Silberfein said after the Suffern game. “I guess my soccer skills are coming a little in handy with that. It’s definitely a little different. There’s a learning curve to it, but the coaches and players are all supportive. Some of the players came before practice to help me learn how to kick and give me pointers, Bennett, too, telling me how he does it. Nothing but supportive and helpful.”

A trio of kickers

Four other soccer seniors — all boys — have taken full advantage of the opportunity to play football and joined the team from the beginning. Esteban Rudloff, Adam Wasserman, Alex Coeytaux and Trevor Koch have been on the roster since preseason began.

“We love to see it,” Higgins said. “We don’t have a huge program and we wish we had more kids. You get banged up in football so not everyone wants to play, so this is a special year and we got more people to come out to play. We love to see it.”

Added Verboys, “They’re great athletes, so it’s been so much fun having them.”

Rudloff, who will play soccer at Fordham in the fall, came on as a kicker and has been handling a lot of the team’s punting duties.

“I think he definitely has the ability — he can kick a ball pretty well,” Scarsdale boys soccer coach Marcos Monteagudo said. “I imagine it’s easy for him to transition once he was taught how to kick a football. Este is a great kid and I know they are lucky to have him. I hope they put him in some pressure situations because I know he’ll come through.”

When Monteagudo coached at Iona Prep, his soccer players often doubled as kickers during football season because it is allowed in the CHSAA. “As long as they’re just the kicker, soccer players should be able to play soccer and kick for football,” he said. “I had a national team goalie who also kicked field goals and he kicked the game-winner one year. It was awesome.”

Last year Abbe was the lone kicker and he had some memorable moments as a sophomore that contributed to a strong season. High school football teams often use a skilled player as a punter or kicker, while only sometimes do they have the benefit of those who specialize in that aspect of the sport. Over the years the Raiders have had a handful, including 2002 grad Justin Cohen, who went on to kick at Princeton. Later on, Dean Perfetti, who never kicked in high school but used his soccer skills to walk on as a kicker at Columbia, inspired his younger brother, Eric, to start kicking and play football for Scarsdale, which he did as an upperclassman in 2009 and 2010.

Abbe tore both his quads against Port Chester and was told he’d have two or three months of recovery and rehab, but he went to physical therapy and, after missing last week’s game, he tried to punt and kick in practice. He did have a rough first game back as he had a punt blocked and also missed the extra point following the team’s third touchdown of the game. Verboys said he was “trying to share the wealth” and should have stuck with Silberfein for the consistency and because Abbe had just returned.

As a dedicated kicker, Abbe enjoys finally having other kickers on the team this season. “We work together in practice and we all help each other out, we all compete and I think it makes us much better,” he said.

In helping his teammates out, Abbe has urged the soccer players to “embrace their soccer form” as opposed to trying to learn a completely new motion since “they both have really strong legs.”

Abbe was thrilled to see Silberfein out there for the first time against White Plains. “I trusted her,” he said. “I knew she was not going to miss. She’s not going to miss ever this whole year. Same thing with Esteban — they’re both going to be lockdown the rest of the season.”

Head assistant coach Bryan Bagala has been urging his student, Rudloff, to give football a try and while Rudloff has been tempted over the years, he just couldn’t not play soccer.

“With COVID I think this is just an opportunity I couldn’t take for granted, so I’m grateful for the opportunity to play soccer in the fall and now football this spring,” he said. “I took advantage of having free time to help the team out and have one last chance to play for my school.”

Rudloff handled the kickoffs against Suffern and White Plains, putting the ball in the air against Suffern, lower towards the ground against White Plains per the coaching staff’s wishes. Like Abbe said, he’s using the “main values” he learned from soccer and transferring it to the football field.

“Honestly there’s not a huge difference involved, so the transition for me was very easy,” he said. “After a few practices I was able to catch on very quickly. I have a lot of friends on this team and I always told them maybe next year I’ll play one season and for senior year they’re happy and I’m really happy I got to do this.”

When he found out Silberfein was being added to the roster, Rudloff was ecstatic. “I knew she played soccer and I know she has good technique,” he said. “It’s definitely a really cool experience. We also have other soccer players, but the fact that she’s being a kicker as well makes me really happy because I think she’s super capable of doing everything they ask her to. I’m happy to share the season with her and my teammates.”

Silberfein is excited to continue playing for the final three weeks of the season. Next week’s big rivalry game is at Mamaroneck and Silberfein gained even more confidence by contributing to a momentous win over White Plains.

“Hopefully I’ll get a lot better and I can gain some more distance on my kicks and also just get more used to the helmet and pads,” she said. “It’s a little nerve-wracking never having done it before, but I think with a little more practice it will be really good.”