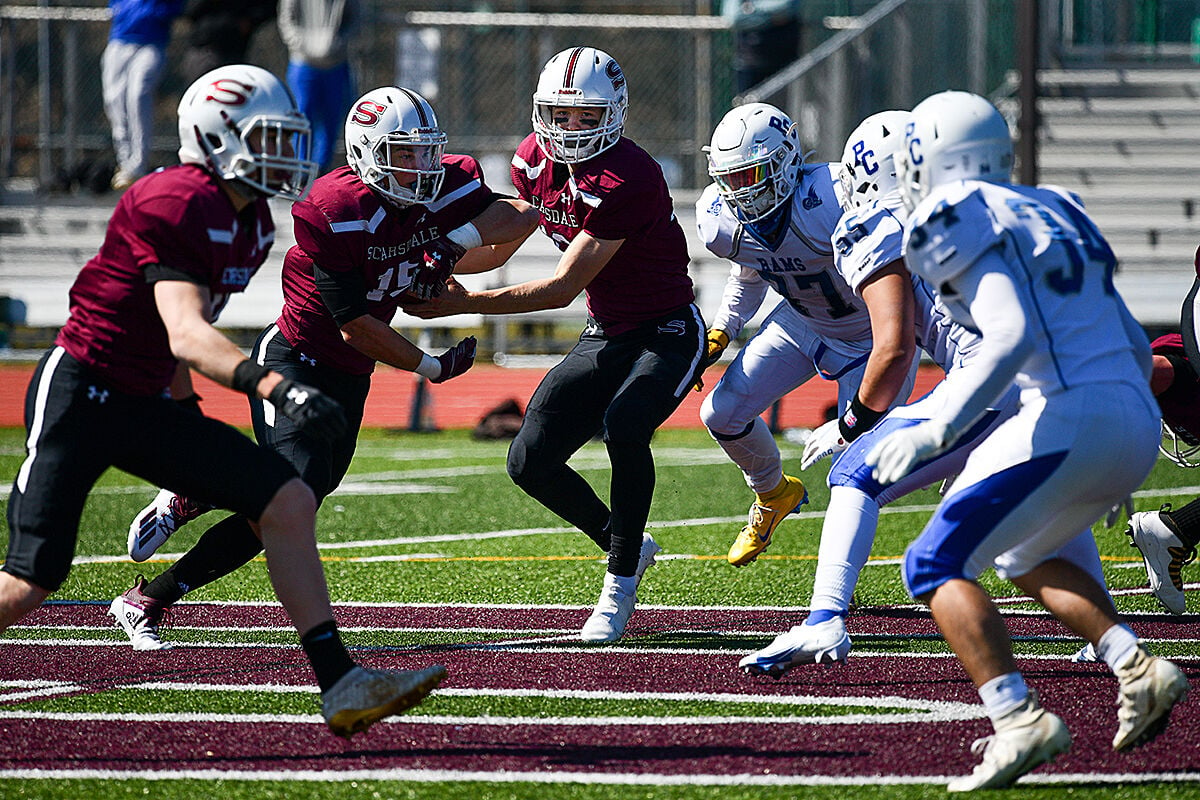 Noah Ebner Borst and Ben Miller teamed up to lead the offense vs. Port Chester. 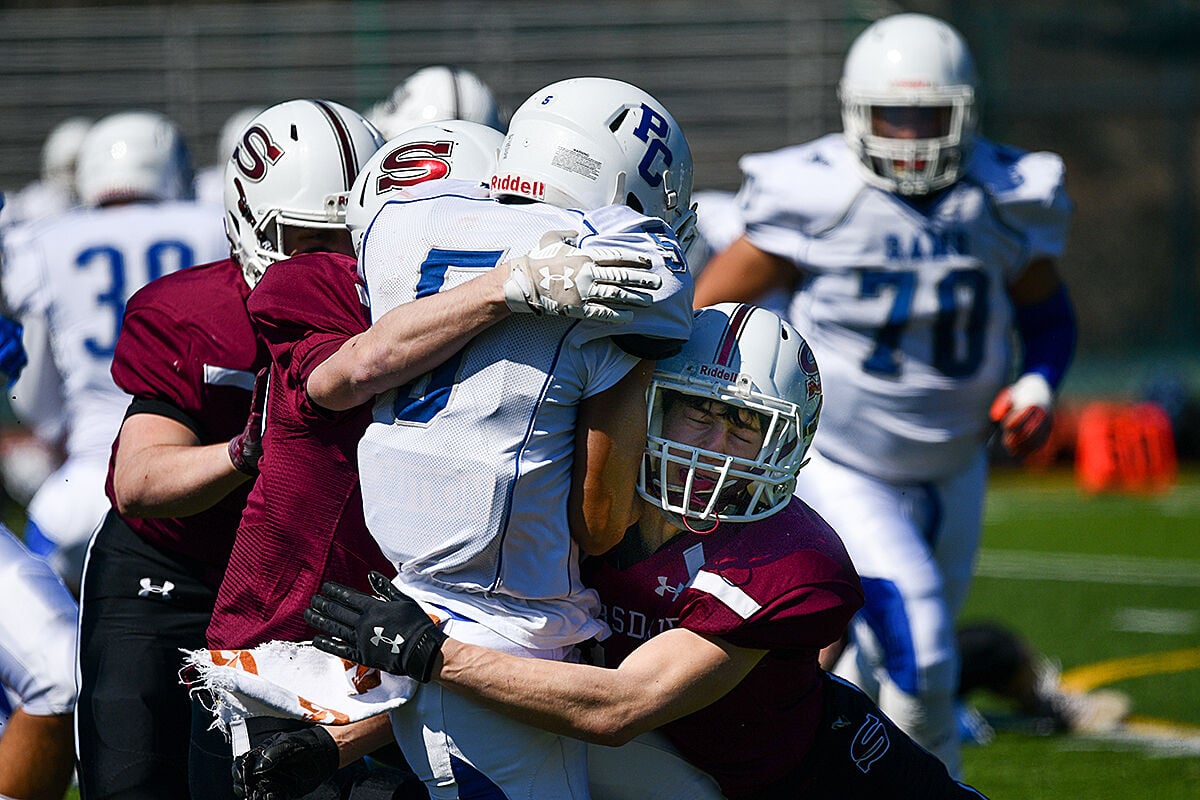 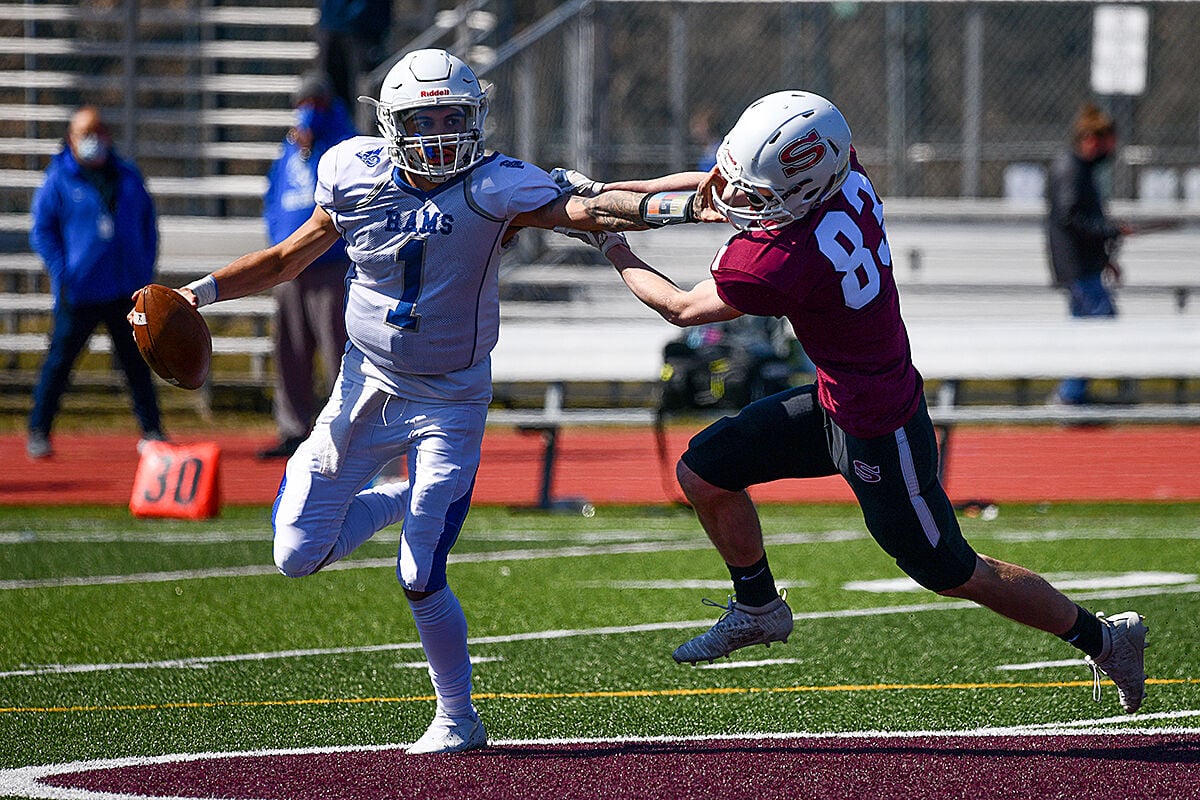 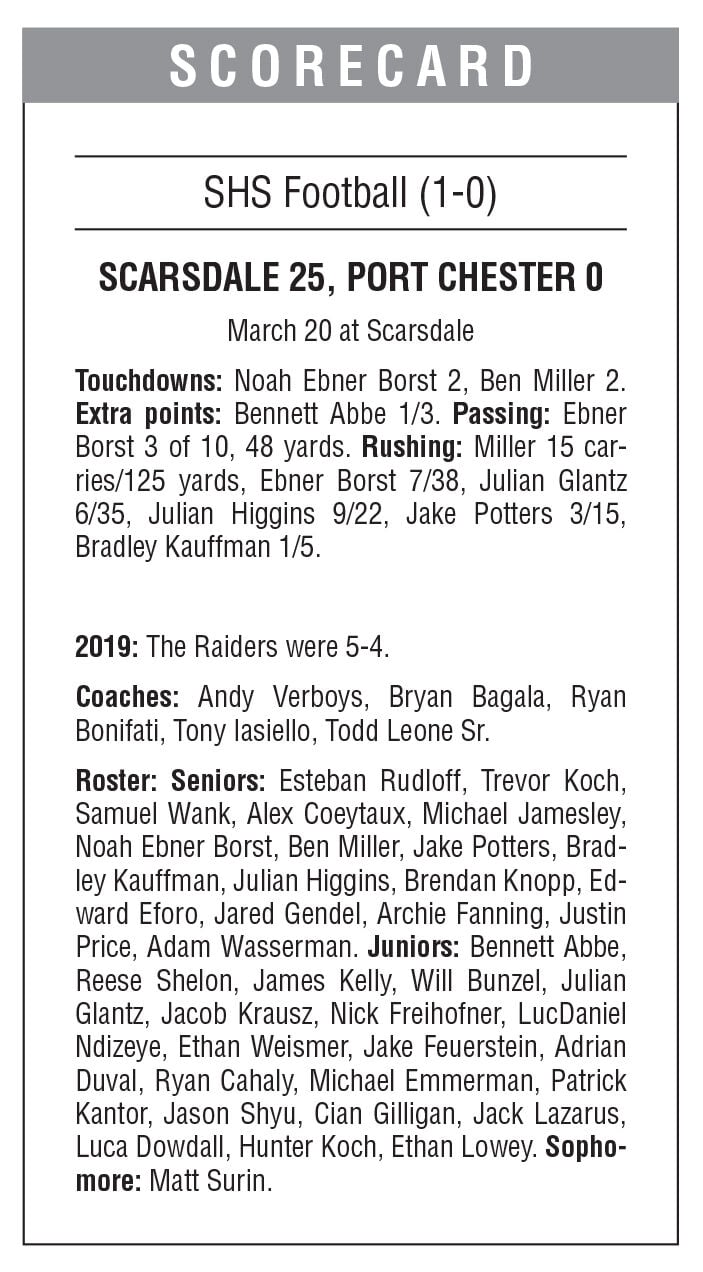 Scarsdale football’s new look offense clicked and the defense put up a shutout. It was a near-perfect opening day for the Raiders with a home 25-0 win over Port Chester Saturday.

“We did a nice job coming out here and executing,” coach Andy Verboys said. “I made adjustments and they handled the adjustments. It’s tough when you go against a team that runs your same offense because you’re going against minds that know what you know and you have to be creative to take that away. I saw the way they were playing our tight ends, so that’s why I stayed at the tight end attack so much. They tried to create havoc up inside, trying to blitz up inside and it kind of hurt them in the long run.”

With senior Noah Ebner Borst taking over for senior Ben Miller at quarterback and Miller shifting to fullback, the Raiders were able to move the ball and amass four rushing touchdowns, two each for Ebner Borst and Miller.

The Raiders jumped to a 7-0 lead in the first quarter with Ebner Borst scoring and Bennett Abbe kicking the extra point. The Raiders scored the other three TDs in the third quarter.

Ebner Borst, in his QB debut, rushed seven times for 38 yards and completed 3 of 10 passes for 48 yards with plenty of targets like Miller, halfbacks Julian Higgins and Julian Glantz, tight end Ryan Cahaly and wide receiver Reese Shelon to focus on.

“With Noah more than capable of doing it, it was an easy switch, plus the quarterback now isn’t on defense because Miller goes both ways,” Verboys said. “It was game one and he’ll get better. He throws a really nice ball and he gets a little ahead of himself and doesn’t set himself. If he would honor it and set himself he’s going to be fine.”

“The difference is Miller is a downhill runner and when I put him at quarterback it was hard to get his shoulders turned to get him downhill,” Verboys said. “He’s a phenomenal athlete and great quarterback, but by putting him at fullback he probably had 100 yards rushing because he has vision and he jump cuts better than anybody on the team and he gains ground all the time. He’s the ideal fullback in this offense and he’s got great hands coming out of the backfield to make a catch.”

“Our seniors did a great job,” Verboys said. “You’ve got to take your hat off to all the seniors. The senior class realizes it could be shut down and it could be their last game. They worked hard in practice and they came out there and they were focused. That was a good, athletic team. It’s not like that team wasn’t any good — they had some big, strong tough kids — but we did a nice job being disciplined and doing what we were supposed to do.”

Scarsdale has Suffern this weekend, a team that lost to Arlington in Week 1. “Arlington did a nice job and you can’t copy what Arlington did, so you have to have your own wrinkles to fix that,” Verboys said.

“There’s definitely some things we need to clean up, but for a first game after two weeks of practices it’s a good start and we hope to keep that energy going throughout the tougher games,” Ebner Borst said. “I think it’s best to learn from what we did this week. We have a lot of new guys in new positions, a lot of new players and to be able to get a feel for what it was like this week and look at that there’s definitely a lot of film to look at.”

Getting together with the team again was a relief for the Raiders. “It’s been so nice after this anticipation and buildup for over a year and it was definitely tough we didn’t have it in the fall because there’s nothing like fall football, but we have this opportunity,” Ebner Borst said. “It’s a pandemic and we’re able to play, so it’s pretty incredible.”

Miller, Ebner Borst, Michael Jamesley and Brendan Knopp held captains practices in the fall and eventually the fitness room opened, the team was cleared for offseason workouts and full practices and competition for the high-risk fall 2 season.

“It was just the entire team staying focused and preparing for the season,” Miller said. “It was everybody all on the same page focused on one goal, which was getting ready for the season and being prepared whenever we needed to be ready.”

Without a normal offseason and preseason, the football team had to adapt and prepare quickly.

“It was tough, but we have a ton of returners on the team, so everybody knew what their jobs were,” Miller said. “All the older kids did a great job helping the younger guys figure out what they were doing, where they’re supposed to go. It was a little tough and we didn’t have that many plays in the playbook this week, but we ran them perfectly after drilling them in practices. I credit the older guys helping the younger guys stay focused.”

Verboys knows the team made some mistakes, but they also only walked away with one minor injury. On top of the scoreboard win, the Raiders were victorious in defying the odds.

“Football is about life lessons,” Verboys said. “In real life you get curveballs thrown at you all the time. This, in all my 32 years, was the most challenging, yet the most satisfying. How cool is it to come out here to see how disciplined we were compared to another team that had the same opportunity to prepare like our kids?”