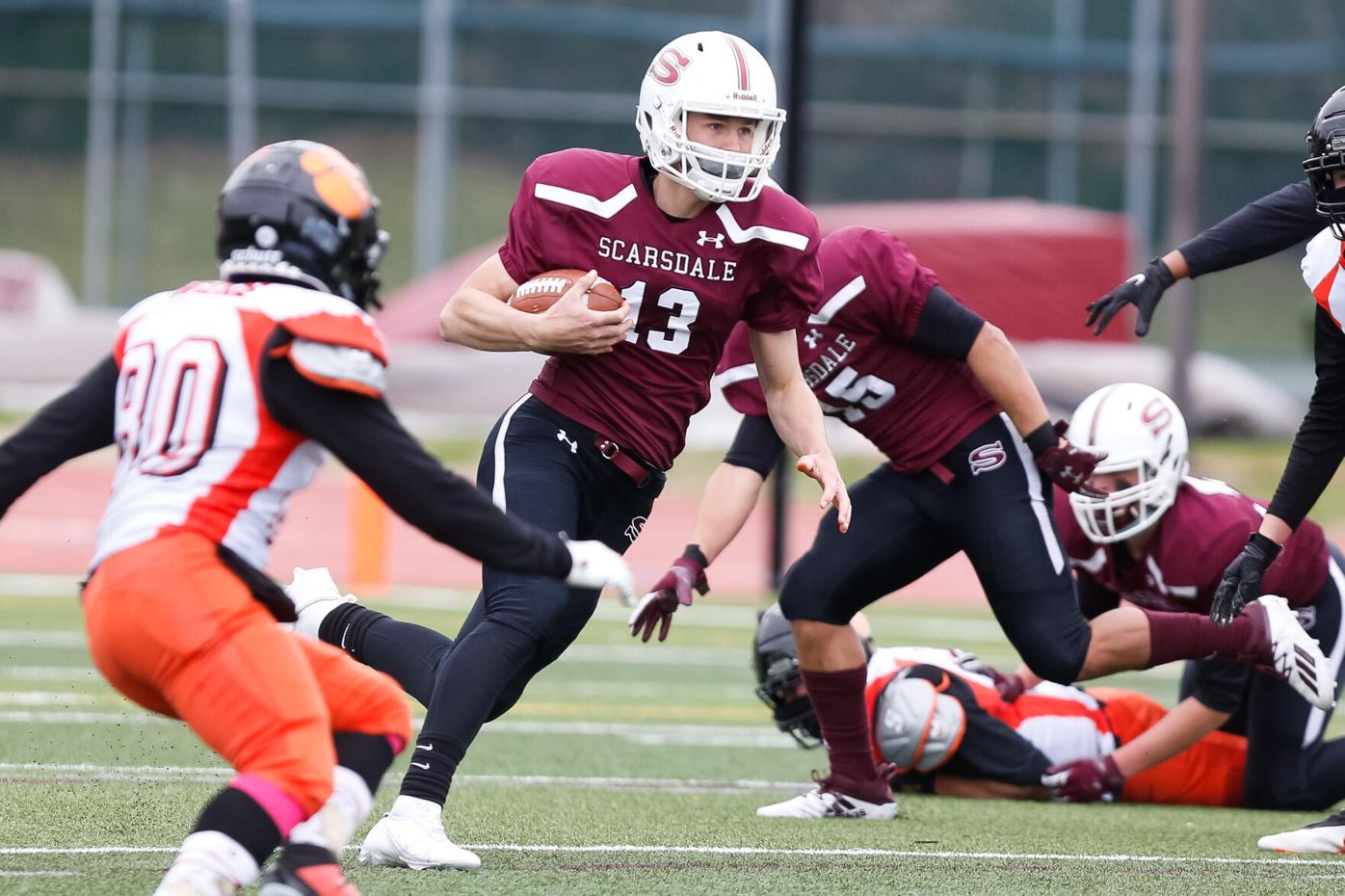 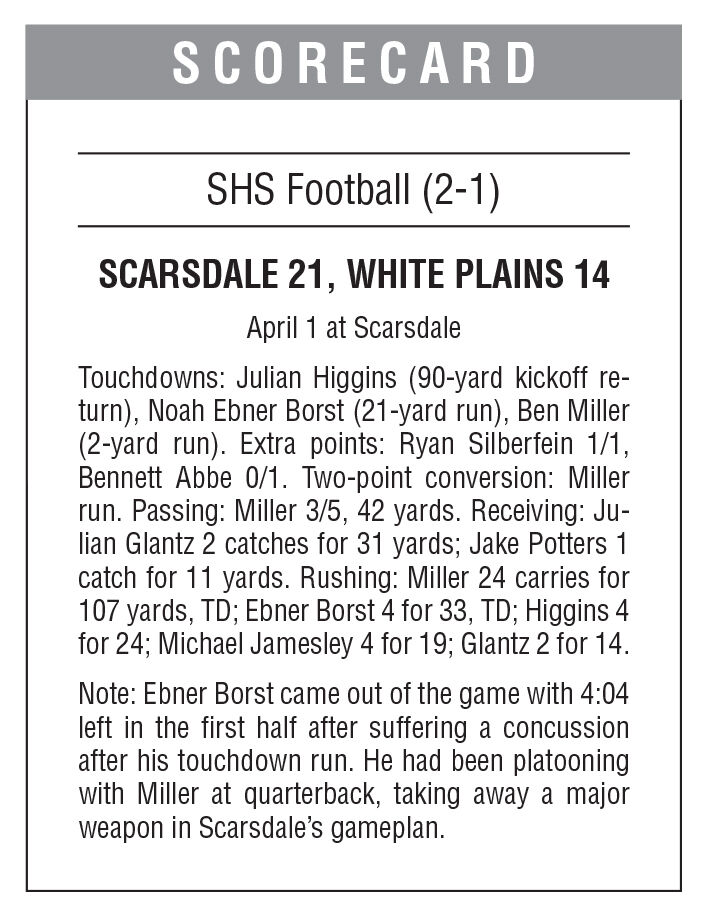 In a football season with a six-week schedule, no playoffs and no guarantees due to the COVID-19 pandemic, there were two games that stood out clearly on Scarsdale’s final schedule — White Plains and Mamaroneck — in Weeks 3 and 4. Those two games are what the Raiders will truly measure their season on.

“This is a rivalry game so this win means a lot,” senior Julian Higgins said. “Having some alumni here who wanted nothing more than to be on the field themselves was huge for us.”

The Raiders head to Mamaroneck Saturday, April 10, for their next rivalry game.

“That’s what we like,” coach Andy Verboys said. “[Athletic Director] Ray [Pappalardi] helped us work it out so we could have these games that mean something. There’s no sectionals, no league — these are the games they will remember forever. Senior class, the last home game for them is a 21-14 win over White Plains in an exciting game. That’s one you remember.”

Through three games, 2-1 Scarsdale hasn’t allowed more than 14 points in a game — none to Port Chester, 14 each to Suffern and White Plains — as it relies on defense to keep games tight as the team is turning the ball over more than it is getting the turnovers by a pretty substantial margin, something Verboys hopes to clean up, along with penalties, for the second half of the season.

“We’re still making too many mistakes, which is very frustrating,” Verboys said. “We have to be clean on all ends. The penalties still hurt us. But this is a gritty group. We played some great defense again.”

In a tight game against White Plains, seniors Ryan Cahaly and Brendan Knopp had major stops late in the game. “Those were two big plays,” Verboys said. “They tried to go back to the well with the screen and Cahaly read his guy and he was right there to make that tackle.”

Offensively the Raiders were platooning senior quarterbacks Ben Miller and Noah Ebner Borst, giving them more weapons and options and causing mayhem for the opposing team. It was working well until Ebner Borst got taken down deep in the end zone after a 21-yard touchdown run. He suffered a concussion after being tackled onto his head. The Raiders were lucky they didn’t lose Miller earlier in the game when he took a helmet-to-helmet hit at the end of a run while almost on the ground.

The team missed Ebner Borst for the final 28 minutes of the game and hope to have him back against Mamaroneck. Miller went back to carrying the load offensively. He was 3 of 5 passing and ran for 107 yards on 24 carries.

“Miller is just so dynamic with the ball in his hands,” Verboys said. “There were so many blown plays he should have been tackled for a loss and the kid just doesn’t quit. He got us a couple of first downs he should have been dropped for a loss. It was insane and I was already thinking about the next play and he’s still fighting and gets the first down. It’s fun coaching a kid like that.”

It looked like it might be a scoring slugfest as White Plains, after a run for negative yardage and a pass defended by Higgins, scored on the third play of the game, turning a short 5-yard completion into an 80-yard touchdown 58 seconds into the game. The two-point conversion made it 8-0.

But that lead didn’t last long as Higgins returned the ensuing kickoff for 90 yards and Miller punched in the two-point conversion. With 10:45 left in the first quarter, it was an 8-8 game.

After a solid kickoff return and two first downs, White Plains turned the ball over on downs at the 12-yard line when junior Julian Glantz forced the runner out of bounds needing 6 more yards for a first down.

Scarsdale took over with 7:31 left and kept grinding and eating up the clock for the rest of the first quarter. The drive, which featured solid runs by Ebner Borst, Higgins and senior Jake Potters, also featured Higgins recovering a Scarsdale fumble. It ended seven seconds into the second quarter when an incomplete pass turned the ball over on downs at the White Plains 31-yard line.

White Plains ended up punting on its next drive and the Raiders let the ball go to their own 13-yard line with 9:07 left in the half. Scarsdale ran for positive yardage on its first six plays: Miller 5, Ebner Borst 12, Higgins 7, Miller 15 (fumbling and recovering his own fumble and then running for a gain), Miller 3 and Miller 7. After an incomplete pass, Miller picked up 8, 6 and 3 yards on the next three plays.

With the ball on the 21, Ebner Borst, back at QB, kept the ball and ran for a touchdown to the right corner, where, 7 yards into the end zone he got injured.

In a historic moment, manager-turned-extra point-kicker Ryan Silberfein, who had been on the roster in Week 2 against Suffern, became the first female to play for Scarsdale. The extra point was good and Scarsdale held a 15-8 lead with 4:04 left in the half.

White Plains’ final drive of the half ended in the end zone with the horn sounding as Higgins broke up a potential touchdown pass. Other key stops on the drive were made by seniors Bradley Kaufman, Michael Jamesley and Miller as the entire defensive unit put pressure on the opposing quarterback.

Scarsdale started the first half with the ball and Miller scrambled 34 yards on the first play. The drive stalled and Bennett Abbe’s punt was blocked. White Plains recovered the ball on the 9-yard line and two plays later scored. The snap was fumbled on the two-point attempt and Scarsdale led 15-14 with 7:33 left in the third quarter.

Miller fumbled on the next drive and this time White Plains recovered the ball. However, on the next play Miller picked off the pass for an interception with 5:49 left. Despite Jamesley picking up 9 yards on first down, the Raiders turned the ball over on downs at the 47-yard line. Junior Ethan Lowey tipped a fourth down pass and Scarsdale had the ball back at the 42 soon enough.

Miller went 16 yards on first down, evading several tackles along the way. To start the fourth quarter, Miller soon hit Glantz for 14 yards and then Potters for 11.The Raiders then ran six times, the final run a 2-yard TD by Miller with 6:07 left. The extra point by Abbe was wide right, so it was 21-14 with plenty of game left to play.

Lowey ended White Plains’ next drive with a fumble recovery, but the Raiders punted four-and-out. Abbe’s punt was strong and junior Reese Shelon stopped the return at the 38, giving White Plains a short field. Knopp and Cahaly stuffed the run on third and fourth downs, respectively, to turn the ball over on downs with 1:29 left in the game. Higgins went 9 yards on first down, Miller 3 yards on second and the Raiders were able to take two knees to close out the win.

“When we were going into the Suffern game we had a lot of expectations and we really had a focus on stopping one of their big players,” Higgins said. “Maybe we had a letdown there, but we knew we had to bounce back this week. We knew this team had some tendencies and we knew if we studied and we were able to rep it out in practice that we could really come out with some big stops when it came to the game. We were able to execute when it came time to do that.”