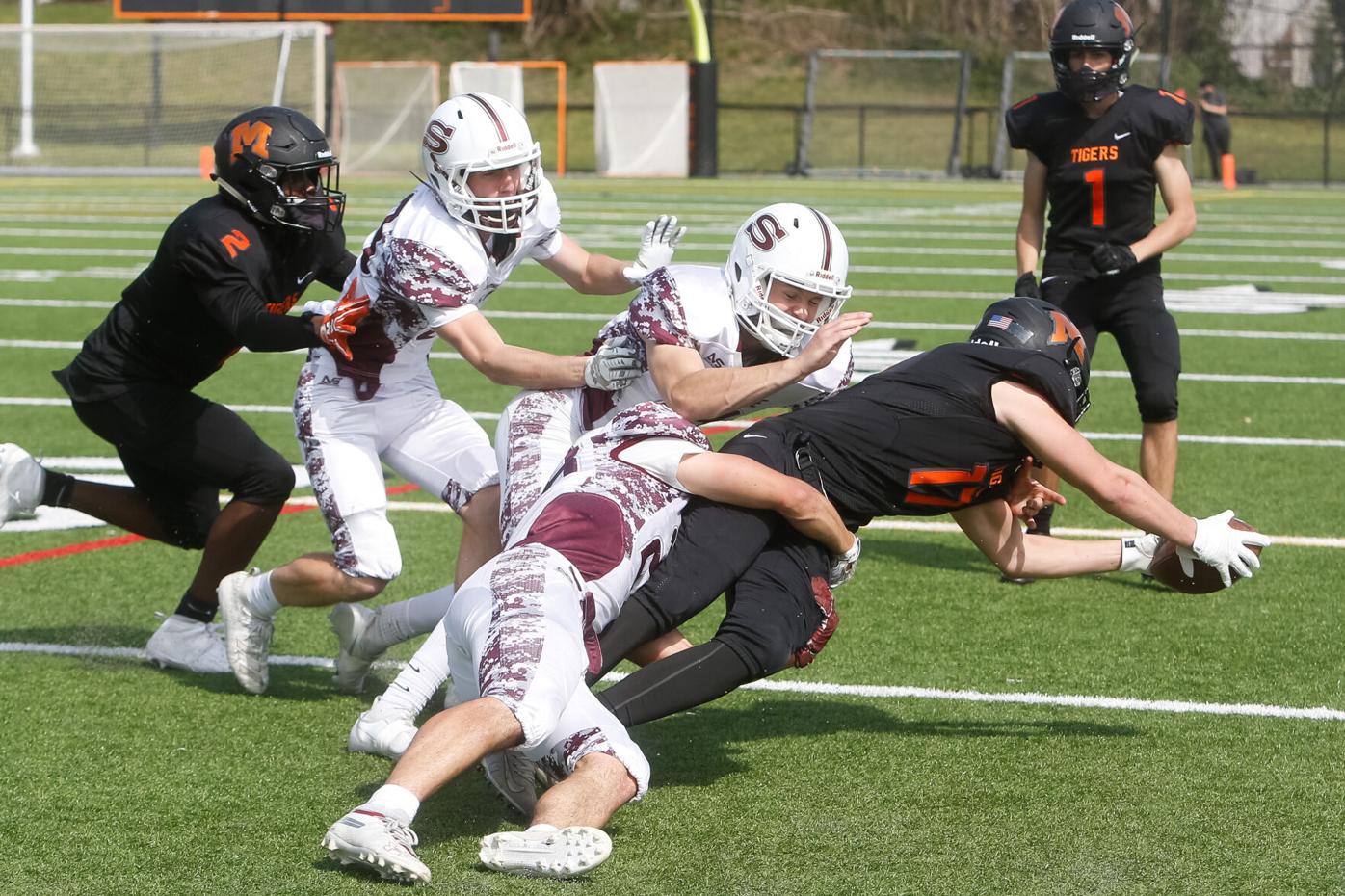 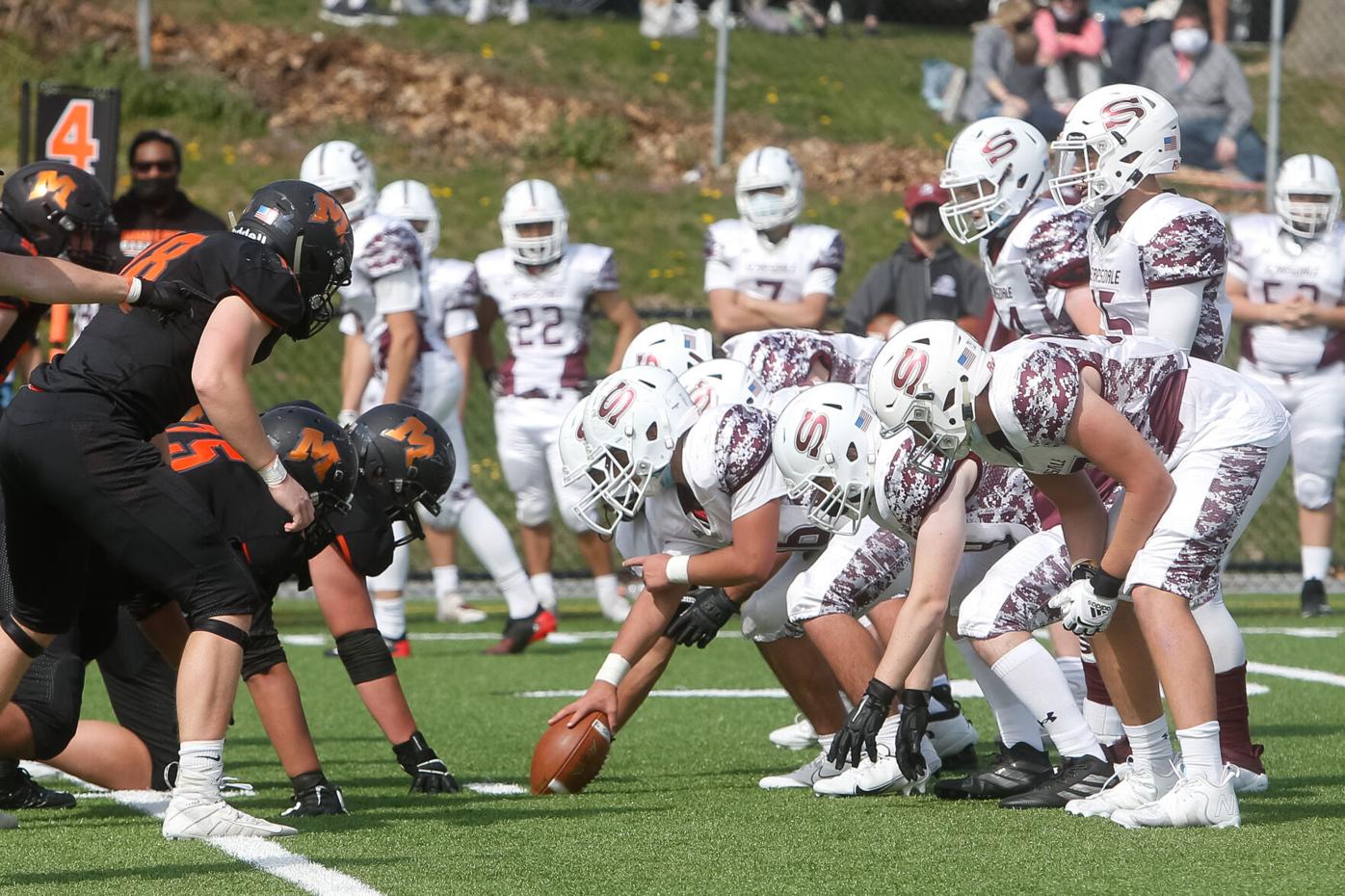 The offensive line has been protecting the backfield and creating space. 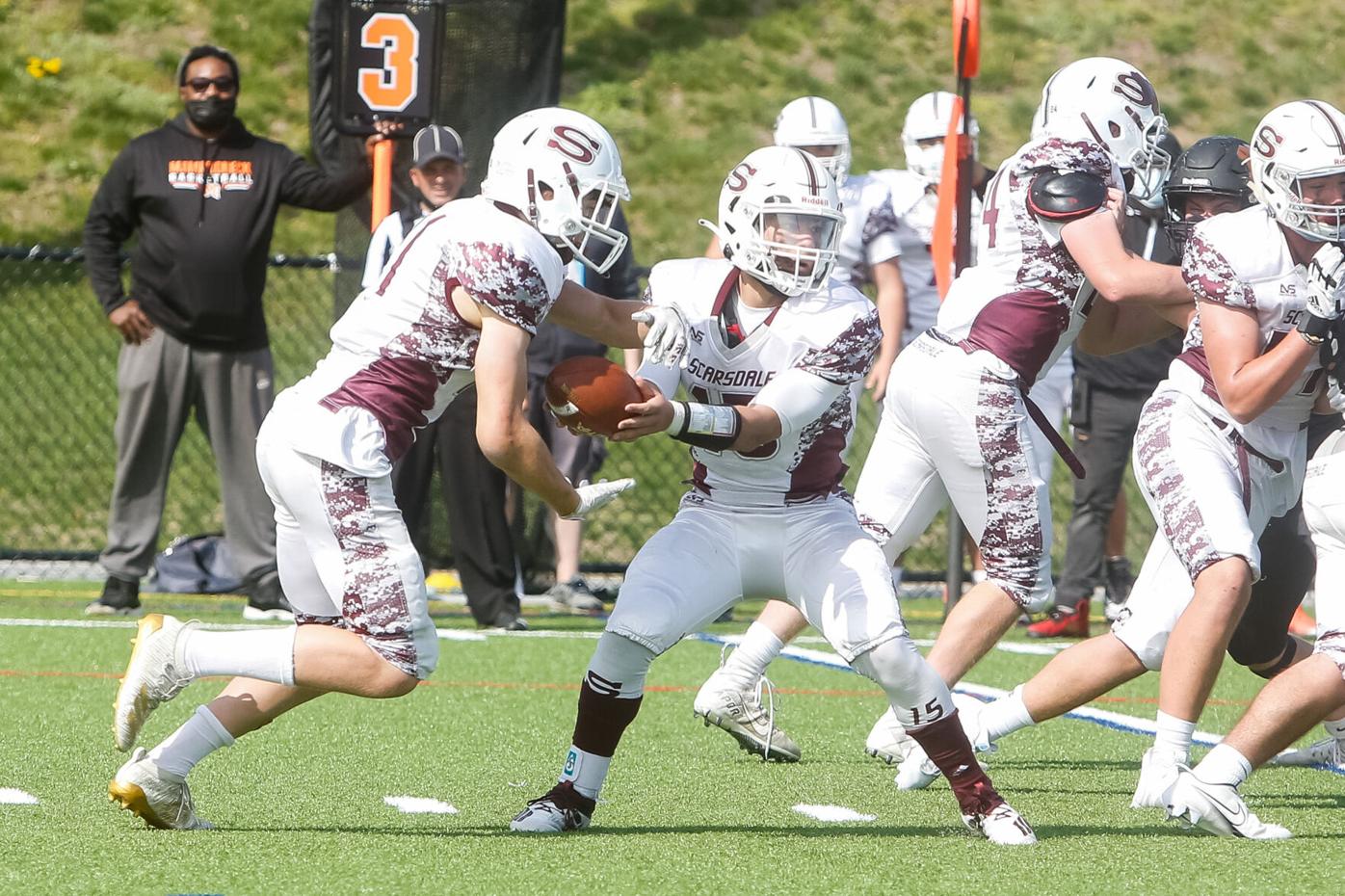 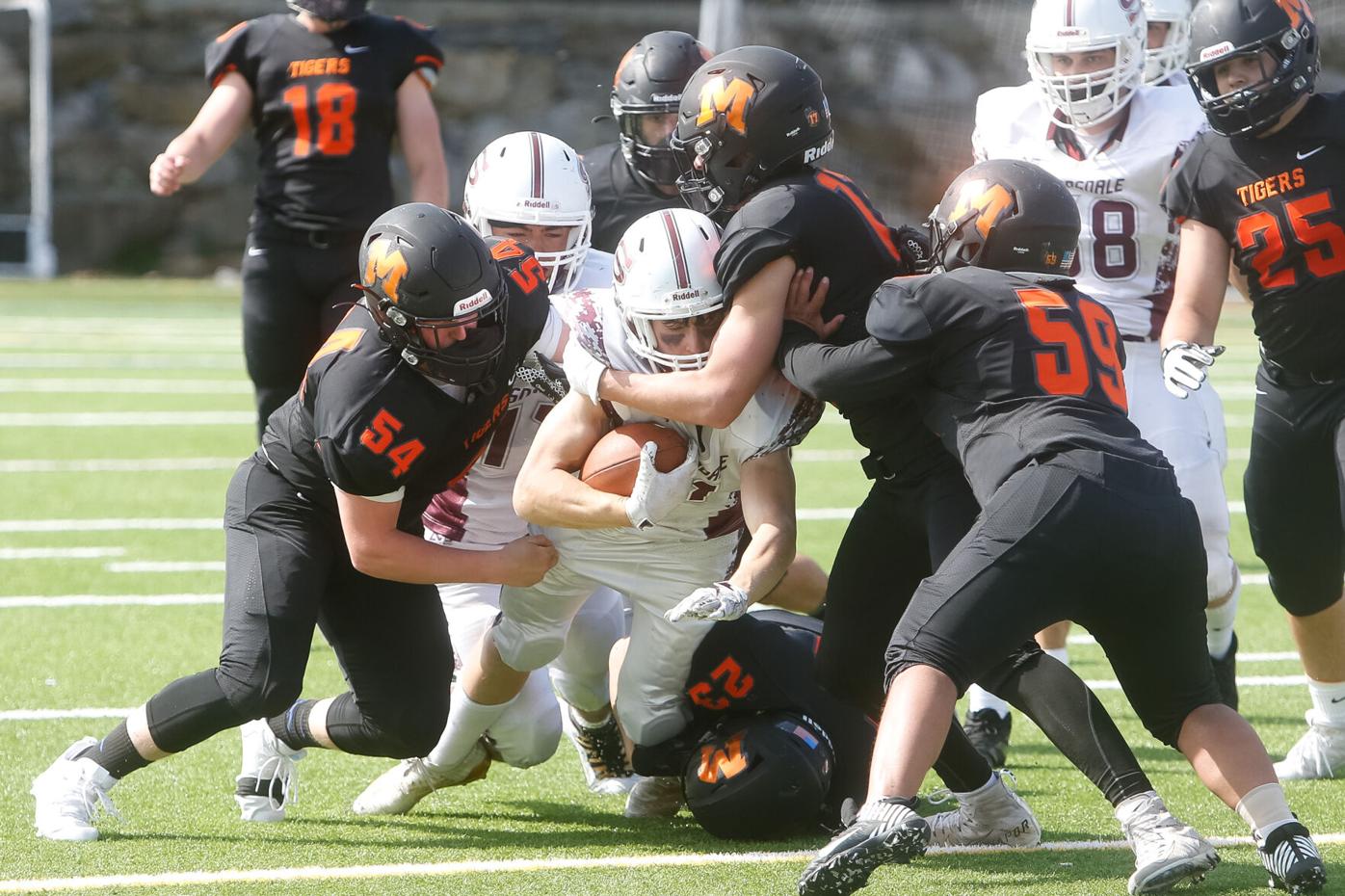 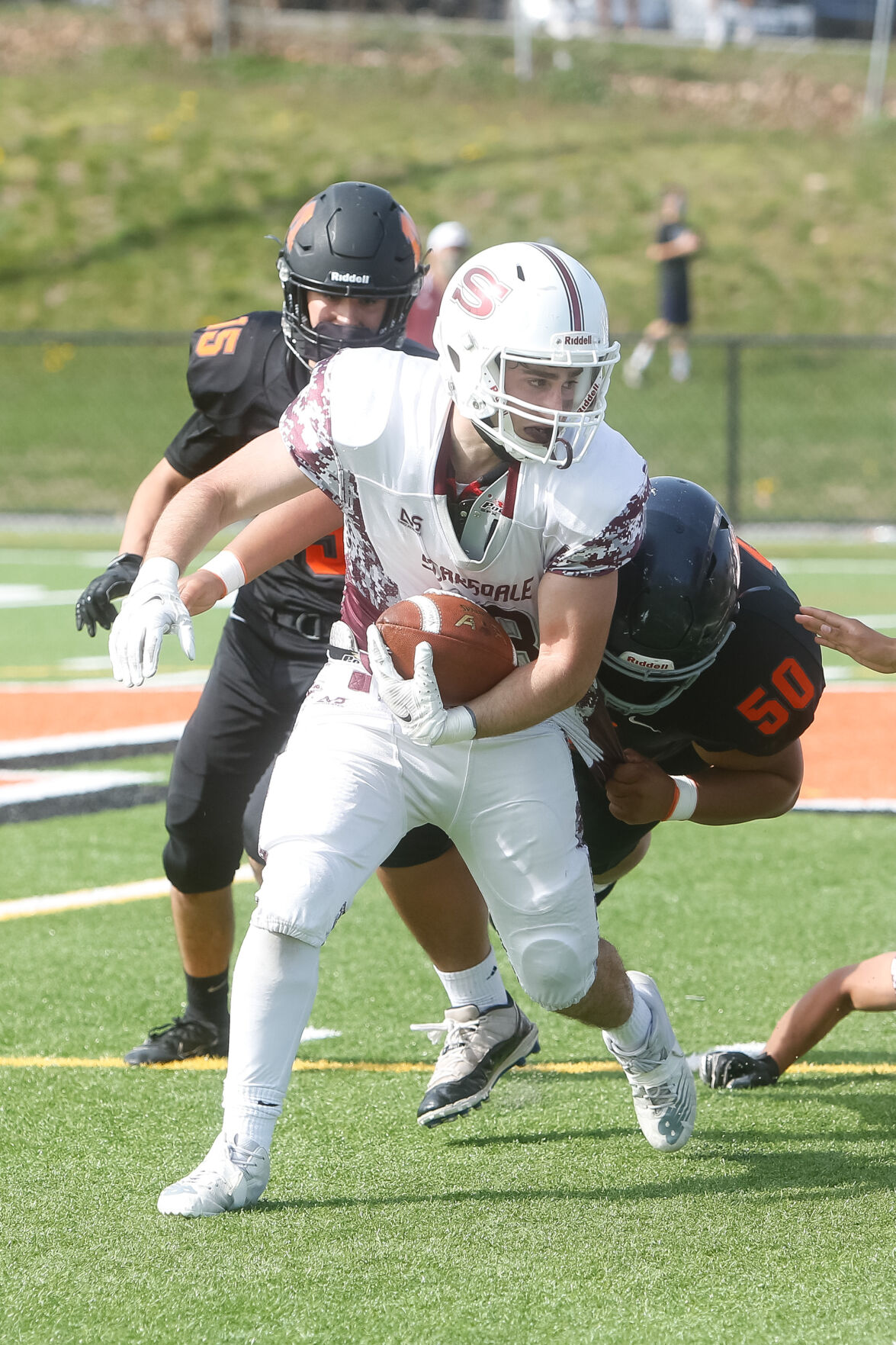 Jake Potters carries the ball in the second half. 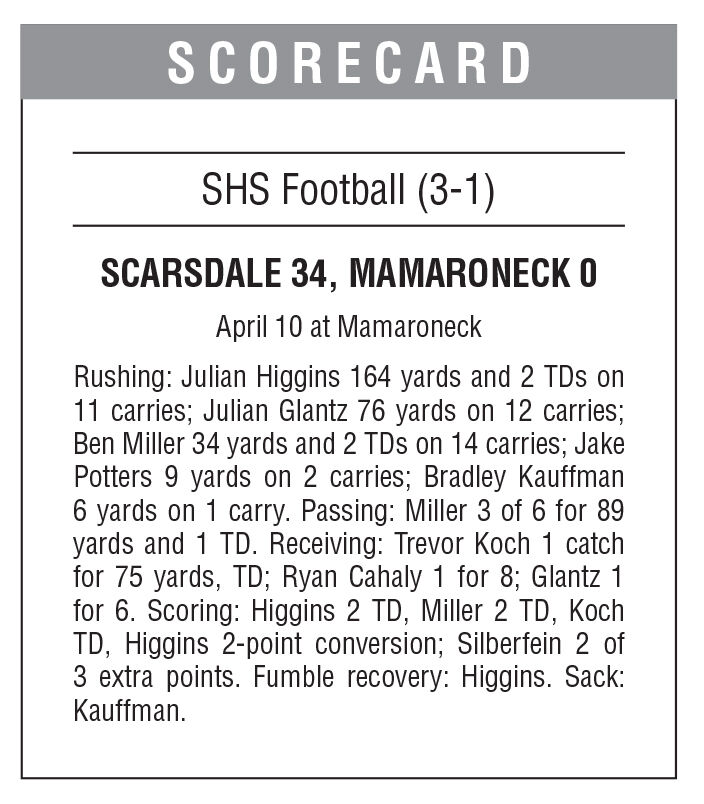 Trevor Koch didn’t need to join the Scarsdale football team to understand how important the back-to-back games against White Plains and Mamaroneck were. Through soccer, basketball and lacrosse, Koch knows all too well the crosstown rivalries are intense.

Koch played football through fifth grade and gave it up going into middle school in favor of soccer. Due to the four-season format during the COVID-19 pandemic this school year, he was able to get back on the gridiron for his senior year.

“The past few years I was planning on quitting soccer to play as a junior, but that fell through and then this year I was given the opportunity to play four sports,” he said. “I haven’t looked back and it’s been a great experience.”

The basketball team lost to Mamo twice this past winter and in lacrosse sophomore year — there was no season last spring — Mamo overcame a big deficit to defeat Scarsdale, so this was Koch’s first win over the school’s biggest rival at the varsity level. “Coming out here today and beating Mamaroneck is something I’ll never forget, especially the score that it was,” Koch said. “That was really, really awesome.”

Koch is one of a handful of senior soccer players who are also taking advantage of the chance to play football. Esteban Rudloff as the punter and Ryan Silberfein as the extra point kicker have also made their mark.

“I love it,” Koch said. “I wasn’t going in with crazy high expectations, but it has meant the world to go out here and compete every day. I’m having a blast. I’m really enjoying it.”

The football coaches tried Koch on defense and “the barrage of stuff” wasn’t clicking quickly enough, so they tried him out at wide receiver, which he called “a more self-explanatory position,” where he has excelled through four games, including a 75-yard touchdown catch from Ben Miller against Mamo. “It worked out well and it’s just been a straight line where we’ve been able to connect,” Koch said.

Price had a rough year last year with injuries.

“I lost my spot, but this year I’m proving myself to get my spot back and helping the team as best as I can,” Price said. “We don’t have kids that are that big, so for our line to play this good is amazing.”

Giving up 28 points and having two shutouts in four games is a point of pride for the line defensively.

“We’re just giving it our all,” Price said. “We’re playing as a team, we’re not lollygagging and we’re not taking any team for granted. We’re doing the best we can and we’re going to show that to New Ro next week.”

Center Eddie Eforo likes protecting quarterbacks Miller and Noah Ebner Borst, who only played defense after sustaining a concussion against White Plains, and key running backs Julian Higgins and Julian Glantz. Against Mamo, Higgins had 164 yards on 11 carries — including TDs of 51 and 77 yards — and two long touchdowns, while Glantz had 76 yards on 12 carries.

“I have to give credit to everyone all around,” Eforo said. “Our backs are crazy good. After COVID and getting a shortened season and not getting playoffs, what it means right now to beat both of our rivals and to beat Mamaroneck the way that we beat them was amazing. As a senior going out it feels good and I feel like we’re leaving Scarsdale in good hands, our younger kids are great.”

The junior class has been stepping up — coach Andy Verboys called it a young nucleus like he’s never seen before — and setting the team up for next year with the likes of Reese Shelon, Glantz, Nick Freihofner, Cahaly and Ethan Lowey, plus sophomore Matt Surin making big plays all season.

“That’s why we won — we have depth, we have guys that want to get on the field,” Eforo said. “Our defense, we can miss a tackle because we have four or five other guys who are behind the first man. That’s how we win the game every time.”

Verboys called the Mamo win “one of the cleanest games that we’ve ever played,” adding, “We’ve been playing good football. Suffern was the turnovers. You see what happens when you do away with the turnovers.”

There were a couple of breakdowns, but the players have the discipline and understand the schemes so they can overcome any situation.

“Their coach was like, ‘I haven’t seen the split bone backfield like that,’” Verboys said. “They were working on all the motions and stuff like that and I came out with no motion, two backs in the backfield split, double tight, so they scrambled the whole first half trying to figure out what we were doing and then we made some adjustments at halftime, which opened up the offense.”

Mamo was playing without several key players on both sides of the ball, while Ebner Borst, Knopp, kicker Bennett Abbe and others have been dealing with injuries.

“He’s in the same boat I am, one player away from disaster,” Verboys said. “It wasn’t so much the players they had, it was the scheme and they didn’t have any answers. They tried to do things they don’t normally do and you don’t know what to do. Once it breaks down and they start guessing, that’s when it’s fun running the ball.”

How they did it

After forcing Mamaroneck to punt after not picking up a first down on its first drive, the Raiders took over at their own 43-yard line. On the first play, Glantz picked up 33 yards on the ground. Miller went 5 yards, Mamo was flagged for a penalty, Glantz went 6 yards and another flag, after Miller picked up a first down, gave the Raiders a first down on the 1.5-yard line. Miller picked up a yard and then scored the TD on second down with 6:43 left in the first quarter. After a false start by the Raiders on the extra point, costing 5 yards, Rudloff was brought in to kick for Ryan Silberfein, and missed wide right. The Raiders led 6-0.

Mamaroneck went three-and-out with Jake Potters and Shelon making stops. The Raiders took over on their own 25 after a fair catch. On third down, Miller, throwing on the run, off balance and off his back foot, heaved a long bomb to Koch, who ran the final 30 yards for a 75-yard touchdown. Miller pitched to Higgins for the two-point conversion, as Shelon provided the block on a sweep to the right side.

Rudloff’s kickoff was stellar, inside the 5-yard line and Shelon made the stop at the 15, pinning Mamo deep. After Michael Jamesley, Shelon and Potters made the stop after 4 yards on first down, Ebner Borst nearly had an interception on an incomplete pass. After a short screen on third down, Mamo punted again. Miller called for another fair catch at the Mamo 48 with eight seconds left in the first quarter.

The Raiders had positive yardage on 10 of the next 11 plays, resulting in a touchdown. Miller hit Glantz on first down for 6 yards, then Miller picked up the next 10 on the ground on three carries to open the second quarter. After a loss of a yard, Higgins picked up 7 and Glantz gained 9, Miller picked up the first down and Glantz had 10 yards on the next three carries to set up first down at the 5-yard line. Miller kept fighting into the end zone for a TD with 5:15 left in the half. Silberfein hit the extra point and it was 21-0.

Rudloff put the kickoff inside the 10, but a strong return on a 15-yard penalty against Koch for a late hit gave Mamo the ball at the Scarsdale 45. After a hold set Mamo back 10 yards, Lowey and Knopp made key stops on first and second downs. Eforo pressured the QB on third down and the pass was incomplete. Mamo punted and the Raiders took over at their own 18 with 2:42 left in the half.

Scarsdale had its first unsuccessful drive and punted from the end zone. Mamo took over at the Scarsdale 27 with 53 seconds left. Ebner Borst almost had an interception in the end zone, but again couldn’t hang on. Mamo picked up a first down on two running plays. On first down, Shelon and Jamesley defended an incomplete pass and Bradley Kauffman ended the half with a sack of the quarterback.

The Raiders started the second half with Kauffman returning the kickoff to the 38. Higgins picked up 8 yards on the ground on first down and then recovered a fumble on the snap that went for a first down. On the next play he went 51 yards for a TD just 1:17 into the half. On a low snap that holder Miller did his best to position quickly, Silberfein’s kick was low into the line and blocked. The score was a commanding 27-0.

Rudloff buried another kickoff deep to the 5-yard line and the Raiders made the stop on the return at the 16. Glantz, Knopp and Surin made stops and Mamo had to punt from the 14. The Raiders took over at their own 44. They picked up a first down, but turned the ball over on downs, with Mamaroneck taking over at their own 36 after a fourth down holding penalty vs. Scarsdale.

Mamo picked up a first down on two plays and on a fourth down the quarterback beat two tackles and went for 14 yards for another first down. After a Mamo penalty, Glantz and Jamesley combined for a stop, Lowey made a stop and Freihofner forced a fourth down. This time Surin made the stop and a flag on Mamo for unsportsmanlike conduct gave the Raiders an extra 15 yards.

The Raiders picked a first down on the first play of the fourth quarter, but ended up punting and Mamo took over at its own 18. Four straight completions netted Mamo 66 yards, but four straight incompletions turned the ball over on downs. Ebner Borst and Higgins defended the third and fourth down plays, respectively.

Scarsdale ran the ball three times and, after a flag for a false start, found themselves on their own 23. Miller pitched the ball to Higgins, who scampered for a 77-yard TD with 5:36 left. Silberfein’s point after made it 34-0.

Mamo took the kickoff up the middle to their own 47 and went four and out as Jamesley and Glantz defended on first and second downs. The Raiders had the ball back with 3:46 left to play and after picking up a first down and running one more play, took knees to end the game.