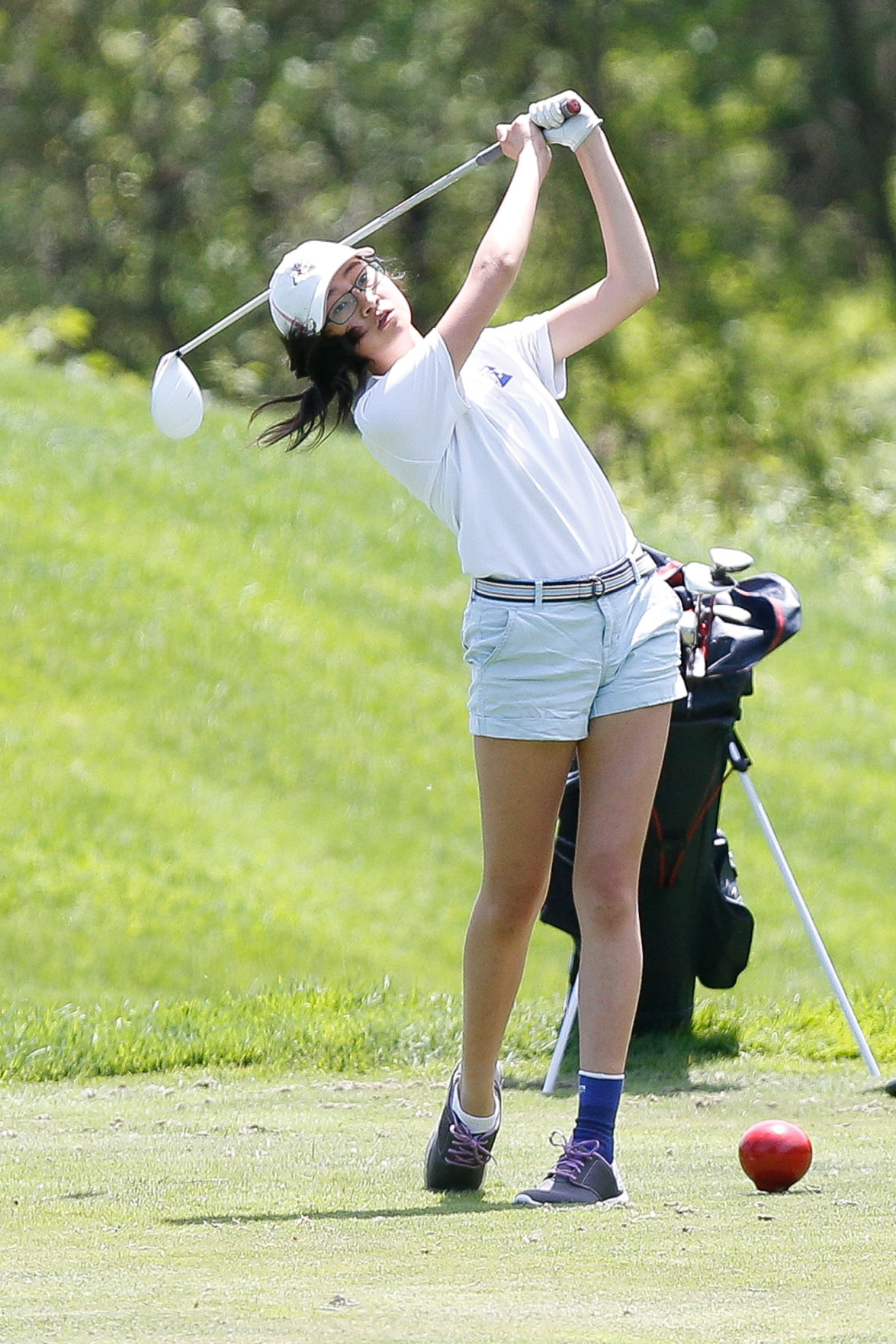 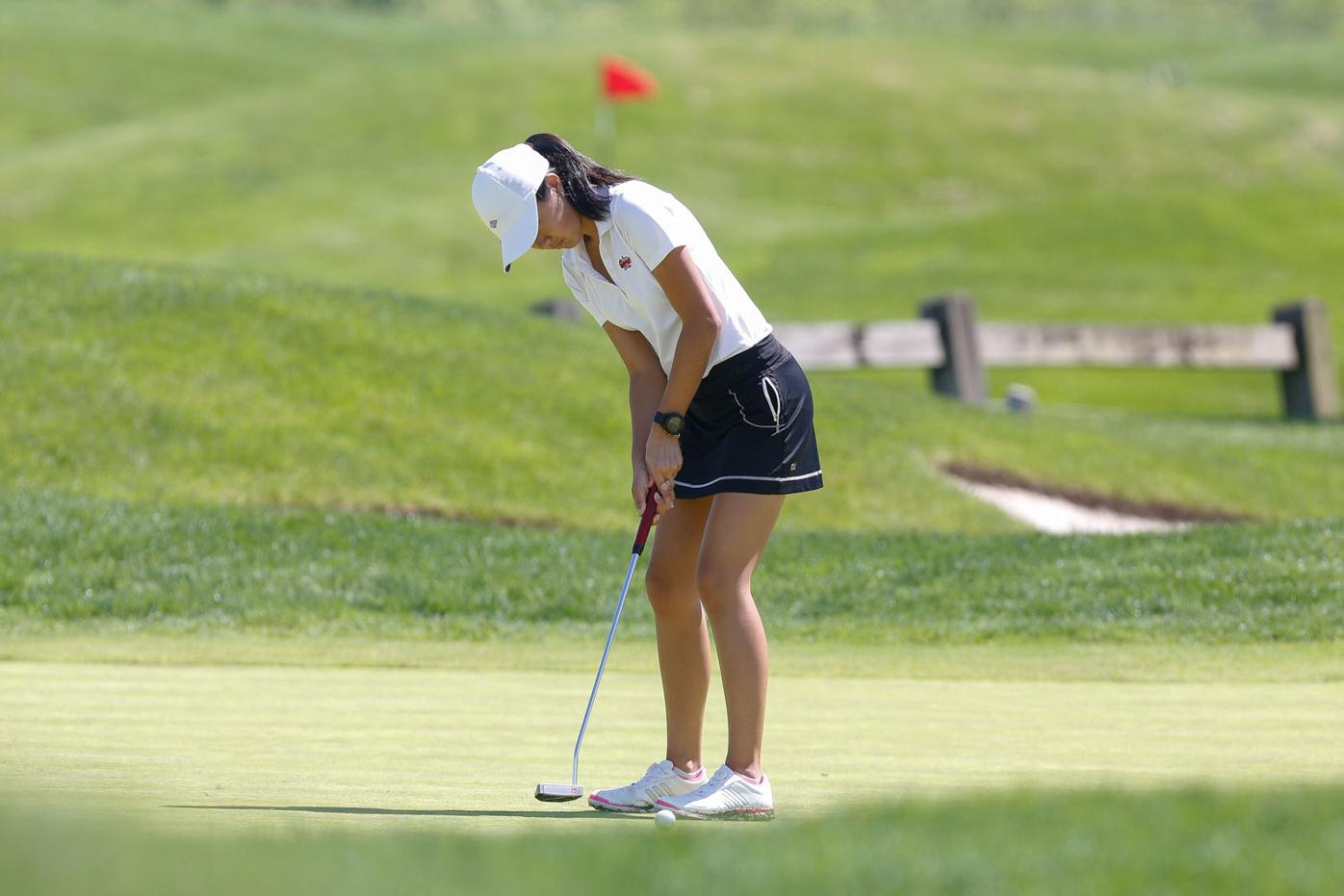 Kaitlyn Lee used to play golf for candy. Now she plays for love of the game.

These days her dad doesn’t have to bribe her to play like when she was 6 years old. The sweet treat has become how good she is on the course.

In her three-year high school career, Lee has made states three times, won Section 1 this spring as a junior and earned three All-State honors, placing in the top six each time.

Lee is easily the best golfer to have come through Scarsdale High School — Rachel Whitney made states as a freshman and senior in 2007 and 2010 — and she still has one more year to defend her sectional title and go after the state title.

“She was in the hunt legitimately for probably 27 holes,” coach Barney Foltman said of states at Bethpage Yellow last weekend. “She fell off a little bit, so next year she has to think she has a legitimate shot of winning. I’m sure that’s what her goal is. That was her goal this year. She fell a little bit short, but certainly placing third in the state is a great accomplishment. It’s another great experience. That’s how championships are built.”

Lee shattered those marks in her third year playing at Bethpage Yellow last weekend. She shot a 68 in the first round, tying her for the lead after the first day. Lee’s 75 the next day took her out of contention for the state title, but left her with a remarkable 143, tying her for third place with Ursuline’s Alice Hodge.

Section 5’s Melanie Green had a consistent 68-70-138 to lead the state, while Section 3’s Bailey Shoemaker went from a Day 1 75 to an outstanding 65 the second day to take the runner-up with a 140. And she’s only a seventh-grader.

Lee had six birdies, 10 pars and two bogeys on the first day of competition. On the second day she had 13 pars, one birdie and four bogeys.

“The second day my putts weren’t really dropping as much,” Lee said. “It was a little bit frustrating, but when I did have a couple of bad holes I just used that anger to perform better on the next one. The first day I made six birdies. That really helped me get going. The second day I only made one.”

Lee said the drop “stung a little bit,” but added “third place is still a very great accomplishment for me.” The 68 is her new best for 18 holes, the 143 her best for 36. “It was great to get that at such a great tournament with very highly competitive golfers,” Lee said.

“My strategy was to play to win, to not be conservative as Coach Foltman had told me,” Lee said. “Having that experience on the same course is really helpful.”

“It’s always great to get that win,” Lee said. “We have a very close-knit team. We’re all very supportive of each other and unfortunately we have to say goodbye to Caroline [Hodge] and Amanda [Tully], who were a very big part of the state team in helping get that team community going. It’s great to get that win with such great golfers and I really enjoyed the experience with them.”

Carmel took home the first-ever individual school state title. The Rams defeated the Raiders in the Section 1 finals the last two years, by seven strokes in a best 5 of 6 format two years ago and by four strokes in a best 4 of 5 this spring. The Raiders graduate starters Mandira Shashank and Katie Bowen.

“Next year I think Scarsdale has a chance of making it to states and even winning states,” Lee said. “I’m excited for the team next year.”

As the tournament moves to Rochester next spring, Lee won’t have that familiarity edge, but she’ll have another summer of tournament play and another year of experience under her belt.

“This summer I’m signing up to play in a bunch of tournaments,” Lee said. “I’m playing in one this weekend… I’m excited to see what the summer brings.”

Lee credits her dad, Steven, for getting her interested in golf. (Her brother, Steven Jr., made states for the boys as a freshman this year.) In addition, Gary Weir at Centennial Golf Club has helped her develop her game over the years as she started playing at age 6, competing at 10.

“My family plays in any condition,” Lee said. “Every Sunday we go out. If it’s raining, snowing we still try to get out there.”

Foltman said not to be fooled by Lee’s exterior.

“I know that she’s a fierce competitor, but you wouldn’t know it by looking at her and following her,” Foltman said. “She’s jovial, just having a good time, but underneath that is a lion.” He added, “Her personality probably outperforms her golf swing. She’s been one of those special, special kids you get once in a career.”

Edgemont’s Evelyn Chiu is now a four-year veteran of Section 1 golf and she’s only a sophomore. After placing 12th at sectionals last year, she was eighth this year. At her first states, Chiu was in the top 7 for Section 1 each day to count her score for the state title victory.

“She had a great mindset going in,” coach Bryan Paul said. “Her goal really this year was to get there. She met her goal and whatever happened this weekend was gravy. She kept her attitude, had a great time, she played well and she set a goal for herself, which was to have her score count toward the sectional team score and it certainly did. It was a realistic expectation that was set and she met it. “

“The positive for her was ball-striking,” Paul said. “That’s easily the biggest improvement from past years.”

Last year Chiu still wasn’t using her driver. The club was literally too big for her, but this year she’s mastering it and driving the ball between 220 and 235 yards consistently off the tee.

Though the short game wasn’t crisp at states, it was her biggest improvement this year, Chiu said. She’s gone from low 90s to low 80s since last year after focusing on the short game over the previous offseason.

“I hope to improve my drive because I’m not that long of a hitter,” Chiu said. “I want to be able to help my second shot be closer to the green. Hopefully I can work my score into the high 70s. I can also work on my short game more because sometimes my pitch and chip shots don’t leave me as close to the hole as I want to be to be able to make a one-putt.”

Paul is impressed at Chiu’s ability to self-analyze her swing. “When an athlete can do that and recognize body positions and understand where she is in the swing, the pros and cons, you have a great opportunity to learn from that,” he said. “She can make the adjustments every day.”

This was the fifth straight year an Edgemont Chiu has competed at states. Older sister Vienna, who graduated last year, made it there freshman through seniors years. When Evelyn was in sixth grade she went to SUNY Delhi to watch Vienna play. She also played a practice round with her older sister at Bethpage.

“I think Delhi was the first time I met Mr. Paul and it was really nice seeing her state team back then because it gave me the inspiration,” Chiu said. “I played Bethpage with my sister last year when she was doing her practice round. I saw her come home with a medal and I saw how happy she was with the girls and I wanted to have the same experience that she had.”

Chiu is already looking forward to her junior year.

“For next year I’m hoping to make the state team again because this year it was a fun experience,” Chiu said. “I hope next year I’ll shoot better than I did this year and hopefully help my team even more. It boosted my confidence and being a part of it helped me know my improvement has come around. The past two years I have been so close. This year I made it and was able to help the team.”

Chiu is also excited for Edgemont’s growth and future success. The Panthers don’t graduate anyone and have a core of three juniors and four sophomores. Two other sophomores, Alexis Chan and Christina Zhong, also made sectionals this spring.

“I’m super proud of the improvements everyone has made this year because we lost two of our seniors from last year, but this year we got a lot of new young golfers,” Chiu said. “I’m looking forward to seeing what they can do next year. Everyone is so supportive of each other and practices are a lot of fun.”