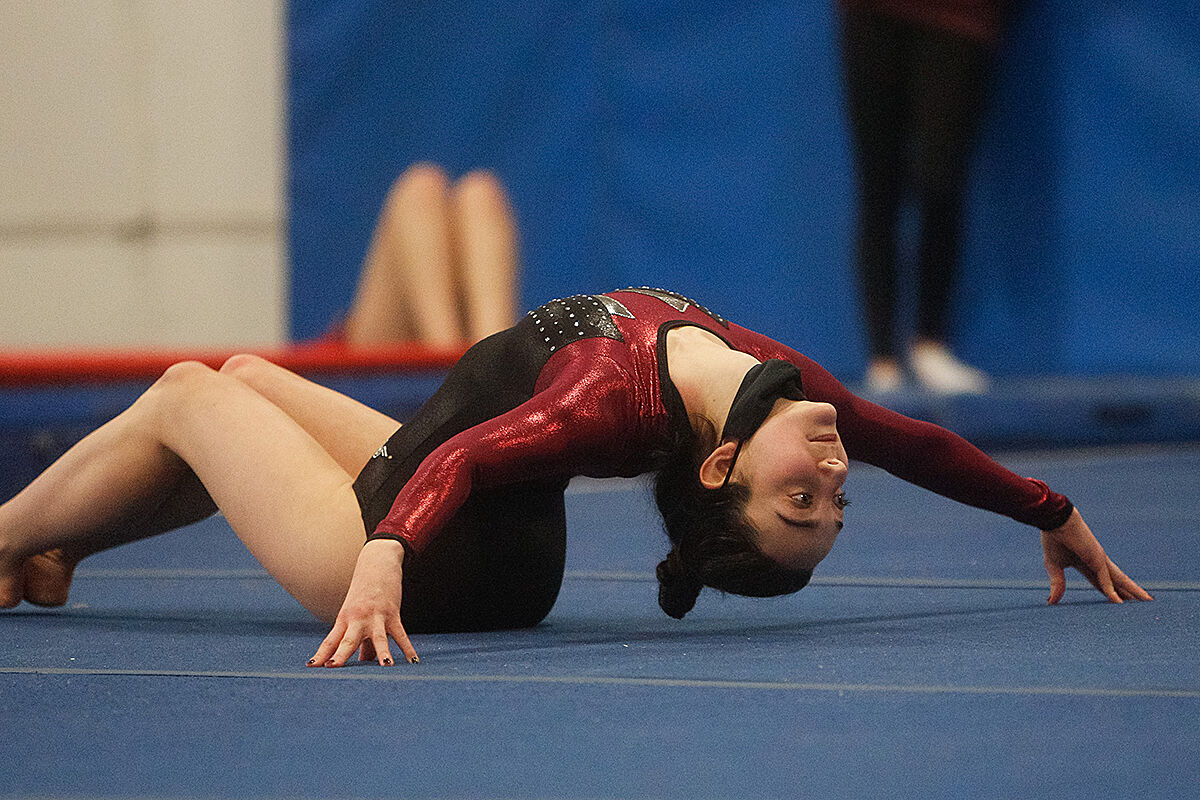 Ella Isak and her fellow seniors were excited to have a chance to perform this winter during the pandemic. 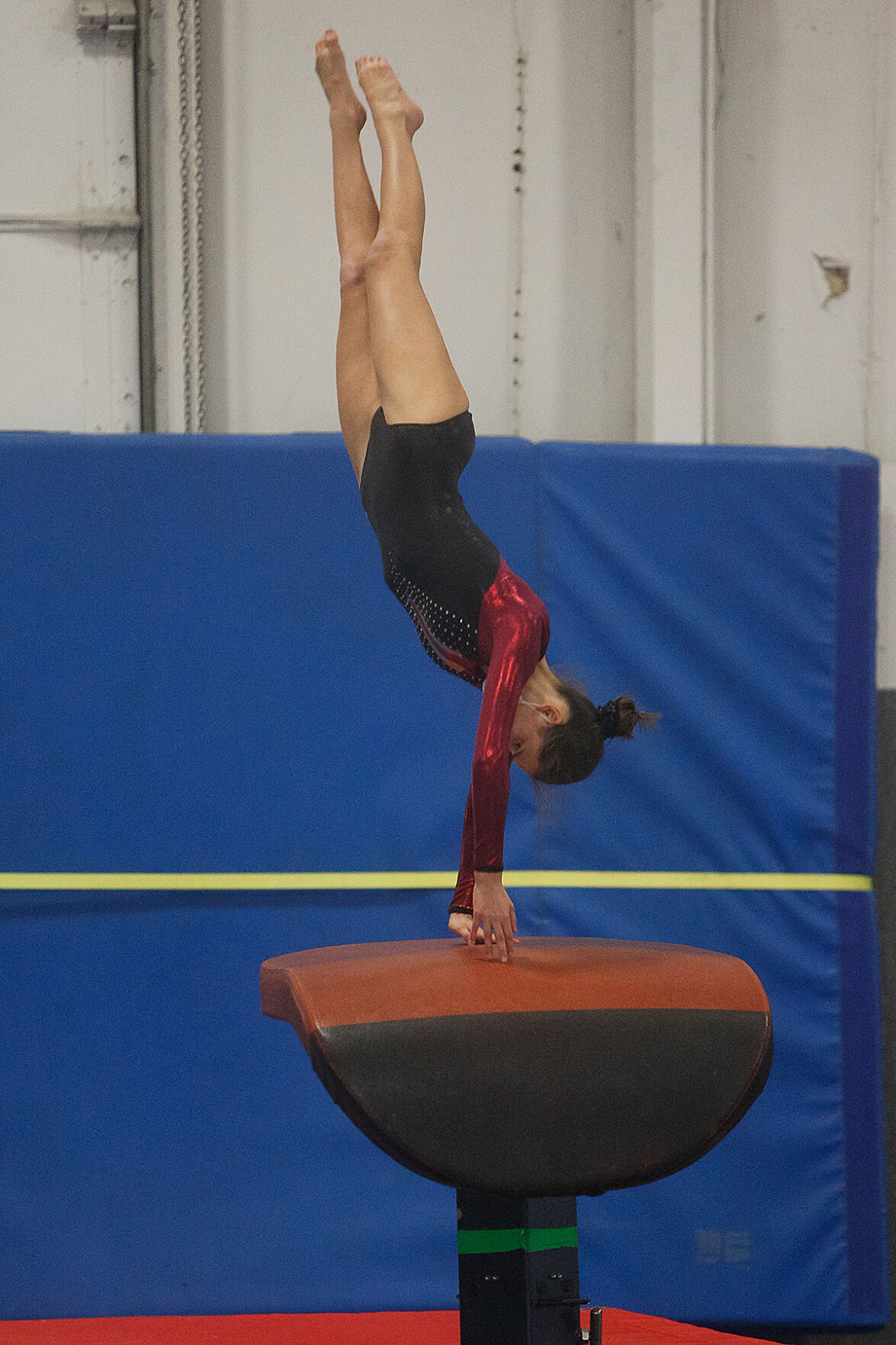 Ana Salzinger vaults for the Raiders in the opening meet of the season. 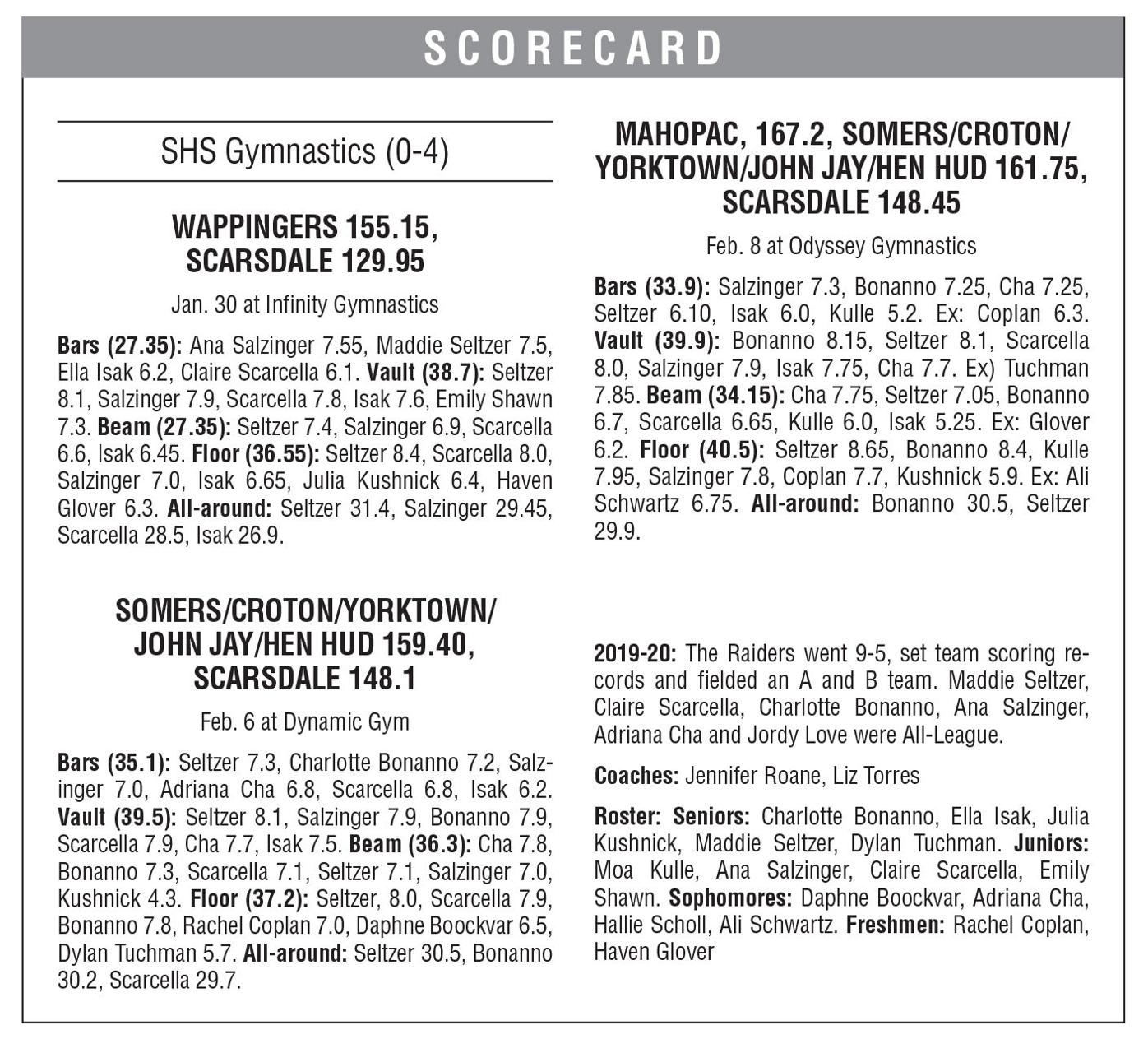 The first meet of the Scarsdale gymnastics team’s season was solid, but the second and third meets were a truer reflection of the team’s talent.

“Our first meet was a 129, so we improved 20 points the second meet and kept it up in the third,” coach Jennifer Roane said. “It was a credit to the kids who finally had enough practices. That first meet I didn’t have a full lineup on bars and beam.”

After the Raiders built on a 129.95 with scores of 148.1 and 148.45, it was a shame there was no more regular season left to keep building as two meets were unable to be rescheduled.

At Infinity Gymnastics against Wappingers on Jan. 30, the Raiders didn’t have a full lineup, but the girls were able to show off their skills, including four who competed as all-arounds: senior Maddie Seltzer (31.4), sophomore Adriana Salzinger (29.45), junior Claire Scarcella (28.5) and senior Ella Isak (26.9).

“I think for the first meet out they did well,” Roane said. “Our returners were a little nervous, but they rebounded very nicely. For a newcomer like Haven [Glover] on the floor as a ninth grader she was a little nervous and she said she forgot her routine, but I told her — and I say this to kids every single year — ‘It’s OK because you don’t hand the judge your routine. They don’t know.’ I tell them not to let them see you sweat. They can put in a pose or a move.”

Roane was particularly impressed with junior Emily Shawn, who stuck her vault to score 7.3.

“Emily Shawn was super, super nervous about doing the vault and worried about what would happen if she falls,” Roane said. “I said, ‘Listen, we’re not going to put you in a situation where you’re being set up to fail.’ [Assistant Coach] Liz [Torres] was spotting and if we see that something doesn’t look right, we’ll grab you. It’s like with tennis — it’s so mental. They might have done a back handspring a million times, but this one particular time they go, ‘I can’t do it.’ But they can do it.”

Shawn, a junior, was just happy to be competing. “Obviously we didn’t think the season was going to happen in the first place,” she said. “It was pretty touch and go. And during preseason we weren’t even sure if we were practicing for competitions. Now that we get to compete it’s a really good escape from everything, kind of similar in the fall when I did soccer and it was really cool we got to have a season. It’s just cool to be here with everyone, especially during this time.”

Among the changes this year due to the COVID-19 pandemic was no doing hair on the bus, no snacks and no spectators. In addition, Roane was constantly sanitizing equipment and the girls’ hands and feet. The girls were allowed to lower their masks below their chins to compete as they were properly distanced from others during that time.

“For gymnastics, since we’re on the event individually and we compete separately it hasn’t been as hard as other sports, but it is weird to wear masks and it is harder to breathe,” Isak said. “I think it’s something we’ve all gotten used to.”

“I think they were very concerned, as were the parents about safety if they’re doing a flip and it moves,” Roane said. “It was mostly about being able to see on the beam.”

The biggest change for the team was not being able to have normal types of team bonding, but they were still able to build relationships during a month of practices in January.

“This is our first meet, and some kids are coming out of quarantine,” Shawn said. “We’ve had better meets, but this is a good start to see the new team and Haven, our freshman, got to see what she can do. I think everyone is excited for the season and to work on some skills.”

The Raiders dealt with practice times at the YWCA in White Plains and Westchester Gymnastics that weren’t always ideal, and early and late start times for meets, too.

“We’re really at the mercy of the gymnasiums,” Roane said. “The kids have stepped up to the plate. They wanted it.”

For the team’s first meet of the season the girls had to meet the bus at 6:30 a.m. on a Saturday morning to head to Wappingers. “You know teenagers love their sleep, but they were like, ‘We can’t wait! We’re so psyched!’” Roane said. “That was really awesome to hear that.”

Isak said of that first bus trip, “It was really early. It was hard to get up, but as soon as you’re up it was fine and we had fun being on the bus. It’s worth it and we still have the rest of our day.”

For the next two meets the Raiders were closer to their scores from last year and almost certainly would have cracked 150 in a normal season.

In the middle meet against Somers/Croton/Yorktown/John Jay/Hen Hud, Seltzer (30.5), senior Charlotte Bonanno (30.2) and Scarcella (29.7) competed as all-arounds. Cha led the team on beam at 7.8.

Against Mahopac and the combined Somers team in the finale, the Raiders were led by all-arounds Bonanno (30.5) and Seltzer (29.9), while junior Ana Salzinger led the team on bars with a 7.3, Cha on beam at 7.75.

“We could have done better,” Roane said. “Our bars score was not as good. Beam we had a few kids fall, but also some good scores. Floor and vault were pretty solid.”

That was the meet where the Raiders were allowed to have extra girls compete for a score.

“It’s very difficult to get everyone in,” Roane said. “Some of them were only able to get in once. Of our 15 girls, 14 do a floor routine. Dylan Tuchman did exhibition for vault, which she hadn’t done in a while and she did an amazing job, a 7.85. As an exhibition!”

Since Roane wasn’t able to have a B team this year, only one meet allowed exhibition performances and there is no novice meet, Roane plans to enter as many girls as are eligible for the regional championship and hold an intrasquad meet for everyone. “It will give the kids another opportunity,” she said. “We’re very proud of them.”

With both practice facilities unavailable during the break, the Raiders will be off until the first Monday back, which is postseason.

“I told them they have to do some type of conditioning and they have to practice their routines at home,” Roane said. “On Mondays we would normally go to the turf field and I would put them through a workout and I can’t do that because of the snow and I can’t go inside. We’re going to do the best we can. It’s safety first and if a kid doesn’t feel comfortable they don’t have to go on.”

Isak, as a senior, was thrilled to have one year with classmates Seltzer, Bonanno, Julia Kushnick and Dylan Tuchman.

“I think everyone is just so excited that it’s happening this year,” she said. “We’ve been home a lot of the time with online school and all that, so I think to be able to get out and see your friends and be together and work out has been a really nice outlet. I am definitely excited since this is my last year that I got to finish it out. Even if the season ends early it was nice to get practices in and this meet today. It’s been really fun.”

Captains Tuchman, Kushnick, Seltzer and Scarcella each had a task, which made Roane’s job easier.

“They all work really well together,” Roane said. “Claire is in charge of the music folder, Dylan and Julia are merch and Maddie does behind the scenes with some of the other stuff, so they complement each other with shared responsibilities, which is nice.”

Seltzer was in charge of making sure all the performances were filmed and uploaded so parents could watch them later, a reward for all the hard work the girls put in this year and in the past.