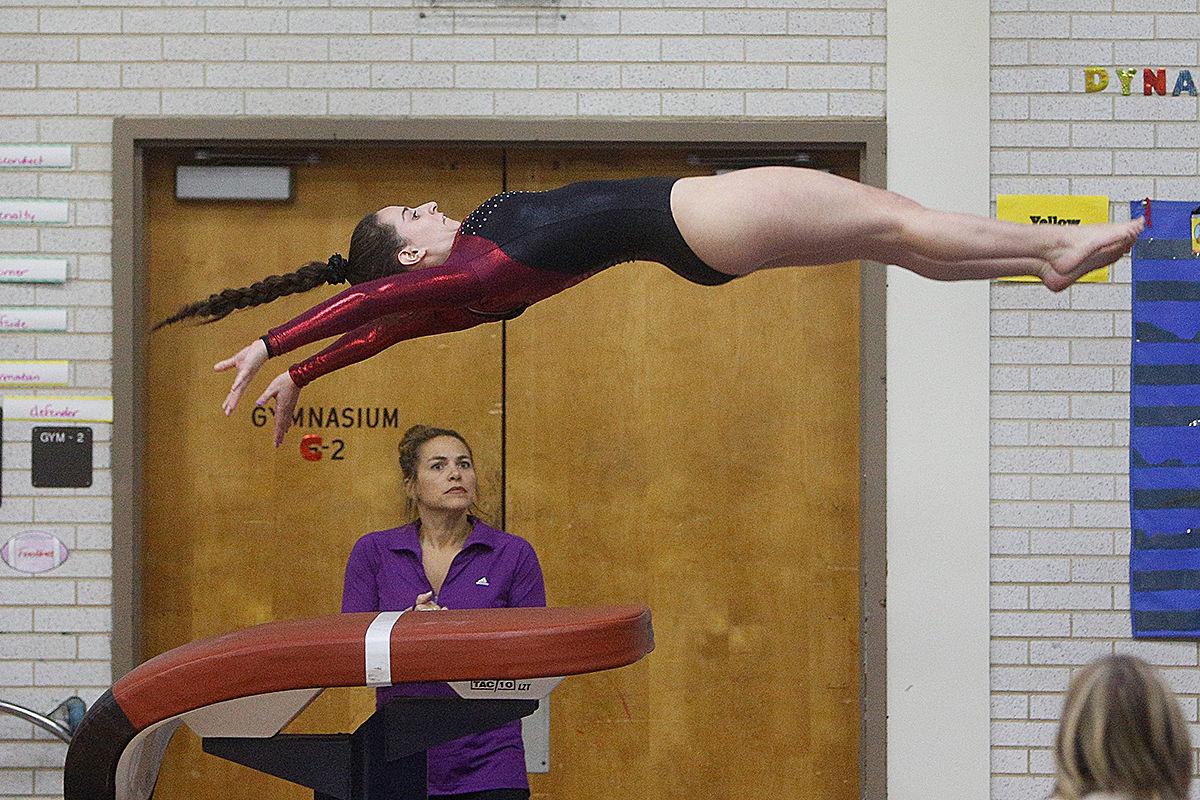 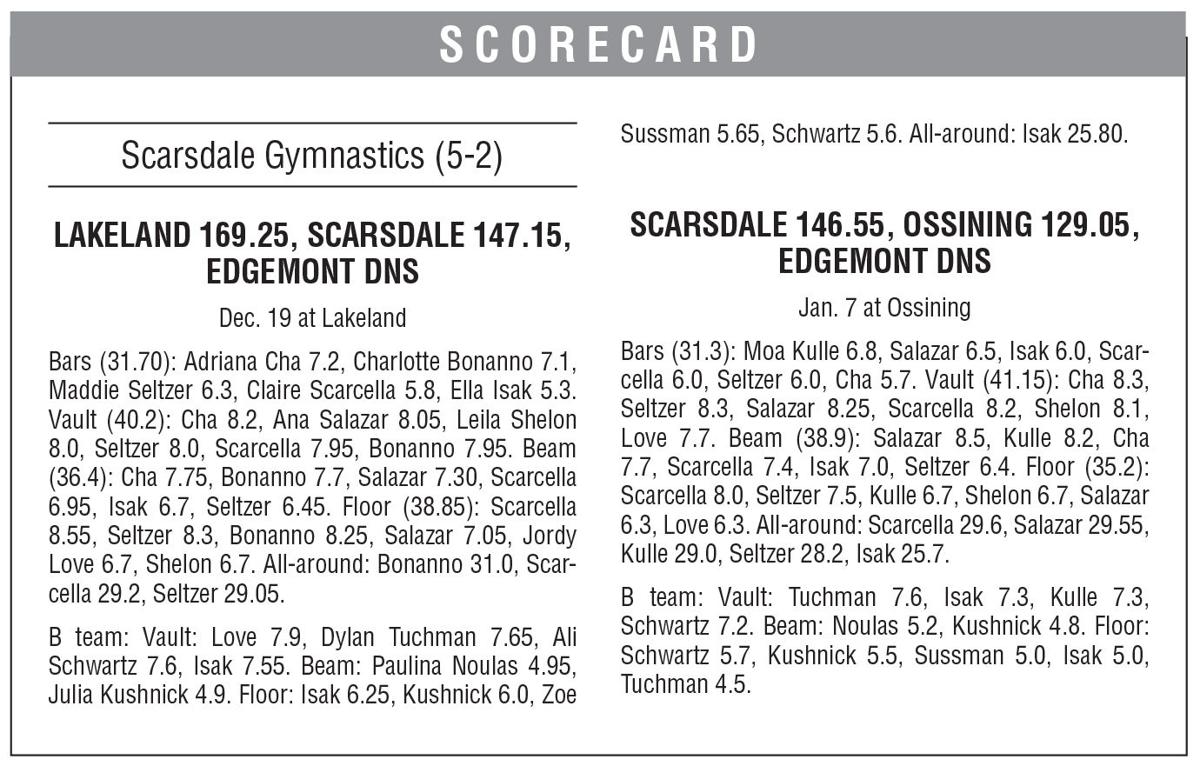 Scarsdale gymnastics went from a three-meet 150-plus point streak to a string of injuries and a sub-150 two-meet streak. Still, the Raiders are holding their heads high as they compete their hardest each time.

Two Raiders have ended their season early. First it was Elizabeth Shawn tearing her ACL playing soccer, and then Molly Grand suffering a season-ending elbow injury that required surgery. That was a major blow as the three-year veteran and captain was aiming high not just in the regular season, but postseason, too.

“It’s terrible,” coach Jennifer Roane said. “She’s like my best gymnast and one of the sweetest kids.”

Grand hurt herself prior to the vacation at the school’s pep rally as she was stunting on a mat on a hard floor. She hadn’t warmed up much and she’s used to competing on a spring floor.

“It’s kind of sad because it’s senior year and I wanted to finish out with the postseason and make it to sectionals,” Grand said. “It is sad, but I’m happy to be able to watch others have that opportunity.”

Grand is one of the gymnasts who helped turn the program around the last three years.

“Over the years it’s been amazing to watch so many more people join the team,” she said. “The team has gotten so much better over the years. It’s been great to watch. We just keep growing stronger.”

The setback has cost not only Grand, but the team’s scores, which have been a major focus for Scarsdale the last couple of years. The girls are more concerned with the overall score — breaking 150 was unthinkable just a few years ago — which pushes them to train and compete harder.

“It’s less of an individual sport, more of a team sport,” junior Julia Kushnick said. “Even though you’re not working as a team on each event, it is a team sport because we’re working to win as a team, not individually. The meets aren’t about who did best on each event, but which school won. You’re there to motivate each other, not just yourself.”

Some teams the Raiders know they can go in and have a better shot at competing with, while some are still in that 160-plus range, which would be the next step in Scarsdale’s evolution if the program continues to attract top club talent.

The Raiders go into meets with confidence they didn’t use to have.

“That’s super important because when you’re out there by yourself you’re on your own, but you know you have the team support,” junior Dylan Tuchman said. “That’s a big factor in your routine. It’s nerve-wracking knowing everybody is watching your routine, but if you know the people watching you are the ones supporting you, you automatically feel comfortable in the room. You feel like you’ll succeed more. For me that’s the case.”

Tuchman has her own individual struggle, a fractured thumb, that has impacted her routines, most notably on floor and vault. But she still goes out there not for herself, but for her teammates.

“Though this hasn’t been my best season because I’m injured, knowing I have everybody there for me despite my setbacks makes it a lot easier for me to want to succeed and compete even more,” she said. “I probably shouldn’t be competing.”

Lakeland has long been one of the top teams in Section 1, so the Raiders were really competing against their past scores on that day.

“Going into it we knew that team had a ton of gymnasts that still did club and we kind of went in to try to do our best, to do what we knew we could do,” junior Maddie Seltzer said. “In each meet you try to beat your score from the last meet and try to get your personal best. That will help get to the team best.”

Not scoring 150 for the first time since the end of last season — they were still strong with a 147.15 — was tough on the Raiders, but they took it in stride, understanding the circumstances with the injuries, the competition and it being finals week before a two-week break.

The pressure to reach a certain score can also get to the girls.

“It’s definitely mentally hard because each judge is a little different and will critique you and deduct you on different things,” Seltzer said. “You could do a better routine and get a lower score, but it’s focusing on each detail and each tumbling pass, each connection to get it right for that meet.”

With a handful of meets left, the big focus is on staying healthy and getting as many girls qualified for divisionals as possible. Roane believes the team has had as many as five qualify in a single year and has the chance to double that this year by fielding A and B teams at meets.

“It would be awesome if we could win and get over 150 and if we don’t, hopefully the girls can get a personal best and look to qualify for divisionals,” Roane said.

In addition to being a more competitive program, being veterans has helped the girls to understand their sport and themselves better.

“Now being a junior captain I’ve seen on floor especially I’m less afraid to be who I am and showing my personality through my dance moves,” Kushnick said. “When I’m doing something different from other people in my routines I hear all my teammates cheering. Everyone is really unique this year and breaking out of their shell as the season goes on. I know when I was a freshman a lot of the girls have similar routines and were less confident in being themselves. Now we have a whole range of music and dance styles, which is really interesting.”

So what is Kushnick’s personality? “I think my floor routine is a little sassy and it’s a little funny and jazzy,” she said. “My dance music is ‘Chicago’ and that shows.”

The support is key. “It’s not only about the gymnastics — it’s hearing everyone yelling my name and saying, ‘You got this,’ throughout the whole routine that makes it that much more fun,” Kushnick said. “It makes me love the sport. When I did competitive gymnastics not in high school you don’t really cheer through your teammates’ routine and that was nerve-wracking having it so quiet. Also on beam I hear my teammates cheering and it brushes away the nerves.”