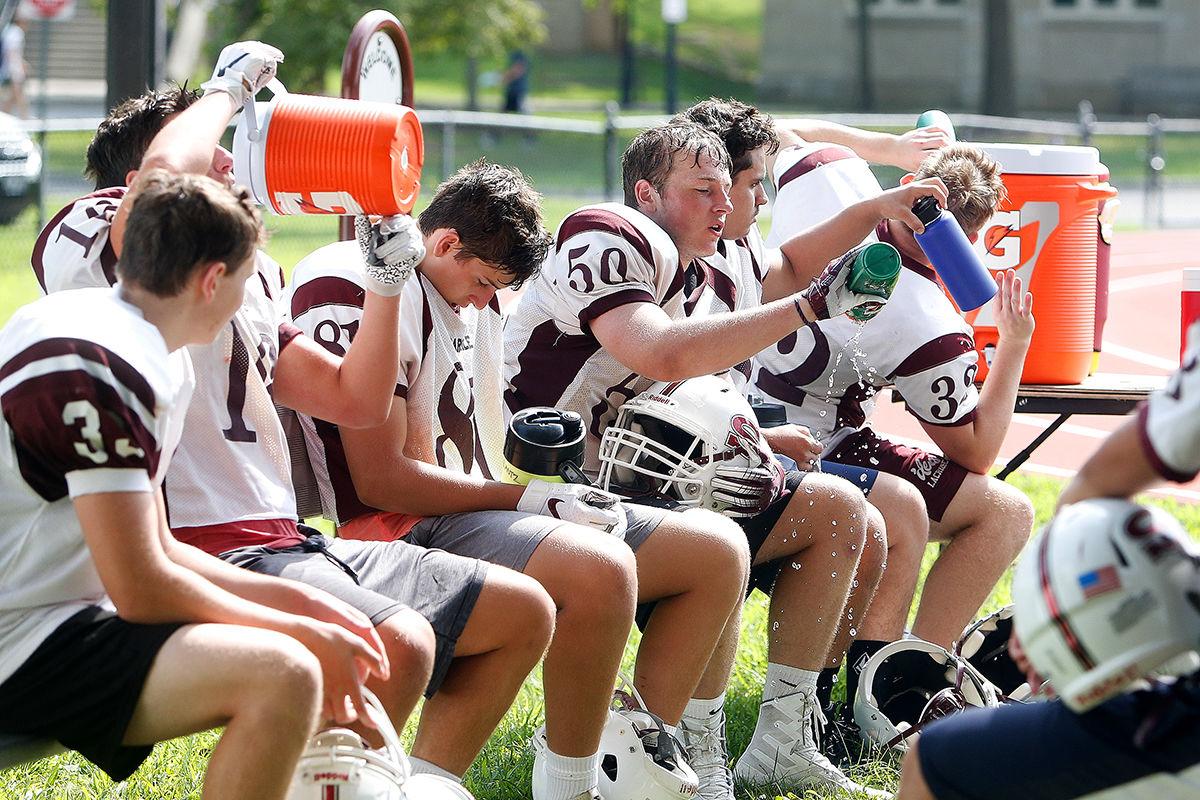 The Scarsdale football team worked hard in preparation for the season. 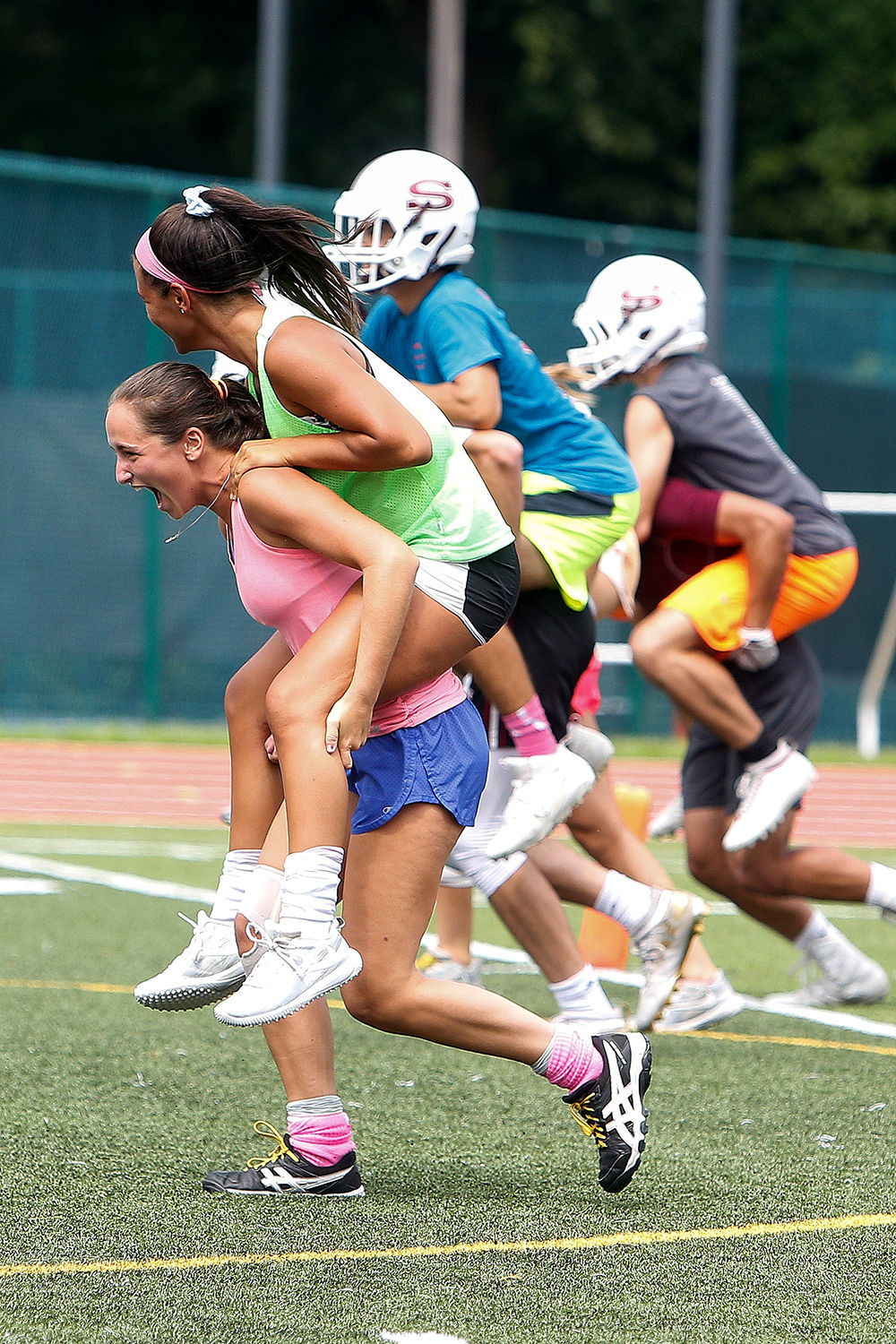 The field hockey and football teams got creative during preseason.

The fall sports season is heating up this weekend.

2018: After qualifying for UCA Nationals in the late fall, Scarsdale headed to Florida over the winter and made the semifinals for just the second time in school history.

Outlook: No matter what the numbers are like, no matter what the starting skill level, the Raiders constantly push the envelope with their routines. The team has a large group of veterans who will set the tone and push for finals this time around.

2018: Coach Rich Clark had another close call, but again his boys team took second in Section 1 Class A, falling shy of sending the team to states by seven points against Arlington. The league and county champs did qualify for the Federation championships, but the meet was nixed due to weather. Senior Andrew Levy was an individual state qualifier, edging teammate Jake Coleman for the final state spot. The two went back and forth and pushed each other all season. The girls were solid with a league championship and 4 of 5 All-League runners return.

Outlook: The boys hope to do what the 2007 and 2008 teams did with back-to-back county titles and then go for the top spot at sectionals behind the likes of Daniel Asher, Ward Bandsma, Joseph Samuels, Alex Friedman and Coleman. The girls have a solid core of returners in Victoria Capobianco, Alexa Doyle, Lizzie Hurshman and Natalyn Kapner.

2018: Lauren Barton took over the program from fellow SHS graduate Sharon Rosenthal, who retired suddenly after her assistant coach was fired in the winter of 2018. Barton stepped in and stepped up with a strong returning group that went 14-5 and made the Section 1 semifinals. The team just couldn’t solve Mamaroneck yet again, falling 2-0 in sectionals, the team’s third time being shut out by the Tigers. Scarsdale was led by seniors Sam Felder, Lizey Mehlman, Lena Glickman, Julia Jamesley, Grace Vericker, Isabella Waterhouse and Chessy Greenwald.

Outlook: Despite losing key senior starters, the Raiders return Liz Scarcella, Sophia Franco and Sophie Carroll to lead the way with second-year goalie Angela Hoey, who gained valuable experience in front of the cage in both field hockey and lacrosse last year. Scarsdale won the section and made the NYS finals in 2016 and the Raiders will look to get back to that level.

2018: The Raiders were 1-8. It was Scarsdale’s first down year in what seems like ages since Andy Verboys rebuilt the program starting in 2006.

Outlook: Ben Miller returns as a junior second-year quarterback. He took his lumps and now will be relied on to carry the team at least to a .500 record for Scarsdale, which until last year was a perennial postseason participant, including making the Section 1 finals in 2016.

2018: The 7-8-2 Raiders somehow managed to win a league championship and like the previous year rebounded to even make sectionals after a brutal start to the season behind seniors Ben Lehrburger, Quinn Burke, Joao DeMello and Dylan Cohn. The season ended with a 1-0 loss to Ossining in the Section 1 quarterfinals. It ended up being the final of five seasons for coach Paul Brooks, who stepped down in the spring.

2018: The league champions were tested early and grew as a team to compile a 9-7-1 record, always competitive in the big games. The season ended with a 1-0 double overtime loss to Arlington in the quarters. Allison Stafford was All-Section, while fellow seniors Nayumi Parente-Ribeiro, Riley Edlitz, Kelly Rutherford, Ella Ansell, Paige Barlow, Amanda Ruzumna, and goalie Christina Coco all earned honors.

Outlook: Scarsdale always has high expectations and they have plenty of firepower with returning players Olivia Bryant, Meghan Quirk, Victoria Von Redden and Emily Yacoub. The team will have a new goalie with veteran Coco graduating.

Outlook: The diving takes a hit with Ho and Du graduating, but Jiang, Pabby and Seltzer are all back as juniors. Scarsdale will again challenge for the sectional title and look to have a large group at states.

2018: Scarsdale was 5-3 in what turned out to be a mostly quiet regular season. In sectionals, however, Emily Anne Tsai and Maggie Inirio-Akuetey were one win away from states in doubles, falling 7-6 (2), 7-6 (5) to Edgemont.

2018: The Raiders were close to glory again, going 14-5 and making the Section 1 semifinals behind seniors Mary Langford, Rena Li, Morgan Costello, Manya Kula and Abbie Vetrone. The season ended with a 3-0 loss to North Rockland.

Outlook: The Raiders still feature several key players like Magan Chin, but will rely on new players in key positions, including setter. Scarsdale never goes quietly and this year’s team will aim to continue keeping Scarsdale in the top four in Class AA.