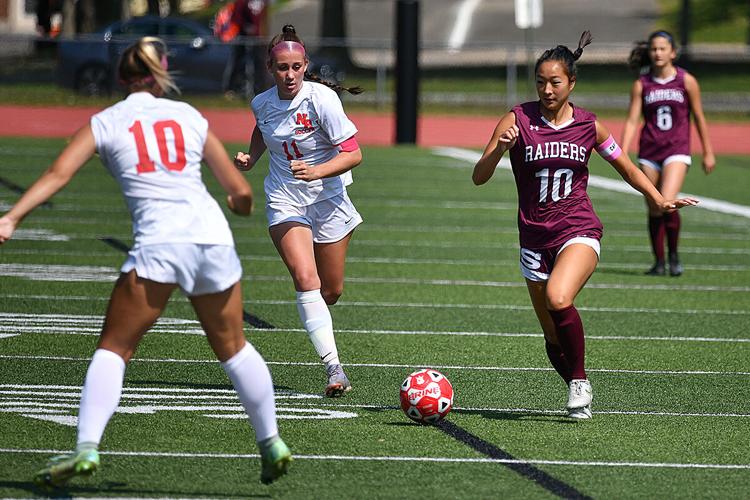 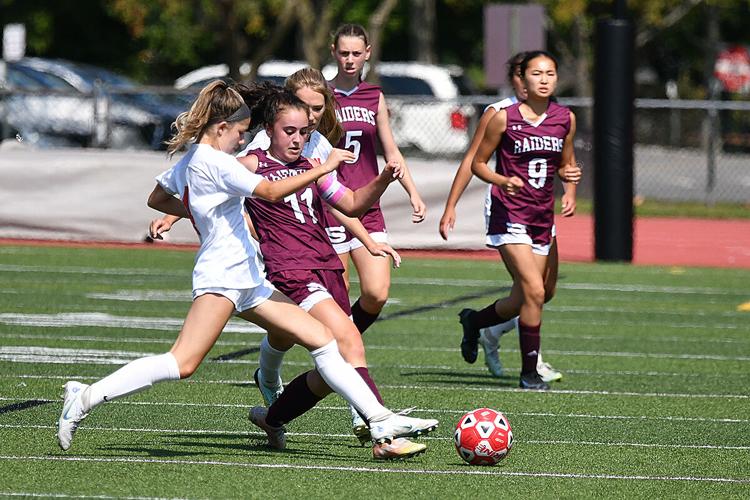 Facing John Jay-East Fishkill, North Rockland and Mamaroneck in succession, the Scarsdale girls soccer team nearly came out with a sweep against top competition as they tied John Jay and won the next two games each by one goal.

With a 5-0-1 record, the Raiders are getting the job done.

“It’s been insane because we have so many new players coming in, but somehow the team spirit is the best that I’ve known in the last three years,” senior captain Elahe Sherrell said. “The things we do on the field, off the field, in school, during practice and the energy we bring to every single game, it’s because we just want to win.”

After going down 1-0, Scarsdale led John Jay-EF 3-1 at the half on Sept. 14. John Jay stormed back and took a 4-3 lead. The Raiders tied the game as sophomore Allison Kahn nailed a free kick from 30 yards out. After one overtime the game was called a draw as John Jay was late to arrive to Scout Field, which has no lights.

“That was a battle we should have won, but they came out fired up after halftime and we talk about keeping our intensity and not having drops of that,” assistant coach Kiera Fox said. “They’re a really strong team, so credit to them for putting it together after we went up 3-1.”

While the Raiders didn’t end up getting the win, tying the game was the next best thing, especially after John Jay had stolen the momentum.

“It’s the resilience we need and the grit we’ve been talking about for years, not letting down, not putting our heads down, so the fact we could pull out a point from that is huge,” Fox said. “Allison, a sophomore, steps up to take a free and lofts one in from 30 yards out, that’s a huge boost for the team. I think we were getting close to a possible winning goal, but we just didn’t have enough time.”

John Jay not only beat the Raiders on opening day in 2021, but in the Section 1 tournament, ending a superb season for Scarsdale. “For us to battle with them is a huge statement for us,” Fox said.

In addition to Kahn, the Raiders got goals from sophomore Lexie Kiley, junior Ivy Boockvar and junior Brady Silberfein. Senior Olivia Lee, Silberfein and Kiley each had an assist. Sophomore Lilly Tessler made eight saves.

Three days later, the Raiders beat North Rockland 2-1. Longtime coaches Mindy Genovese and Fox can’t remember ever having defeated North, so it was a big victory for the program.

“We’ve always come close or had really gritty games, so beating them is huge for us,” Fox said. “If our team can just keep building on this we can make a good run.”

Sherrell scored both Scarsdale goals, with an assist from Lee. Tessler made six crucial saves.

Sept. 19 was another big day as the Raiders beat Mamo on their turf. It was a 1-0 win played in part in a rainstorm. “It was intense,” Fox said. “It’s always a good battle over here.”

Seventeen minutes into the game, Boockvar put the Raiders on the board assisted by Kiley and never looked back as Tessler made five saves.

“I think it’s really important to get a goal early in the game because it gets the whole team motivated and into it,” Boockvar said. “It’s kind of like an advantage because we get more into it than the other team. It’s a great feeling, especially against Mamo because they’re always a tough team and big competition for us. It gets everyone motivated.”

The Raiders are a third of the way through the season, so there is a long way to go. “We have to keep up the intensity, not lose it along the way,” Boockvar said. “We’re on a really good streak and that helps us. The teams coming up are hard competition. We have to keep it up.”

“The captains have come in really strong and really bonded the girls from the beginning,” Fox said. “The team gelled really early on, which has helped us have such a good start. Last year we had a really tough beginning of our schedule and we had a tough schedule this year, but we hit the ground running a little bit faster.”

The leadership is in the midfield and that helps keep everyone organized. That group includes Lee and Sherrell in the middle, whom the Raiders build their combinations off of, along with wingers Wachs and Klein.

“We have a good system we’ve been utilizing with our wingers,” Fox said. “All the girls know the system and they’re learning these different passing patterns we’re been trying to implement that has really been translating into our games. That’s been really effective for us.”

Freshman Gia Asen is also making her mark in the middle for the Raiders.

“We’ve been really lucky to have some skilled freshmen that have come in,” Sherrell said. “In the middle we have a lot of connecting and more than in years past we’re really playing to feet, playing the way we want to play. Even when we’re under pressure we’re able to get from the defense to the middle to the wings and we have people running in. Ivy Boockvar for example will run in there and finish any ball you put in there. It’s insane how we can get the ball to every single person and score.”

Sophomore Tessler, who was on junior varsity last year, has stepped up as goalie and kept the team in games every day. “She’s been working really hard,” Fox said.

Scarsdale is putting it all together and looks forward to more challenges ahead.

“We’ve been working very well together and the team didn’t really change much from last year,” Boockvar said. “We got really effective new players, but many of us have been playing together for awhile. We connect well, we communicate, we motivate each other and work hard.”