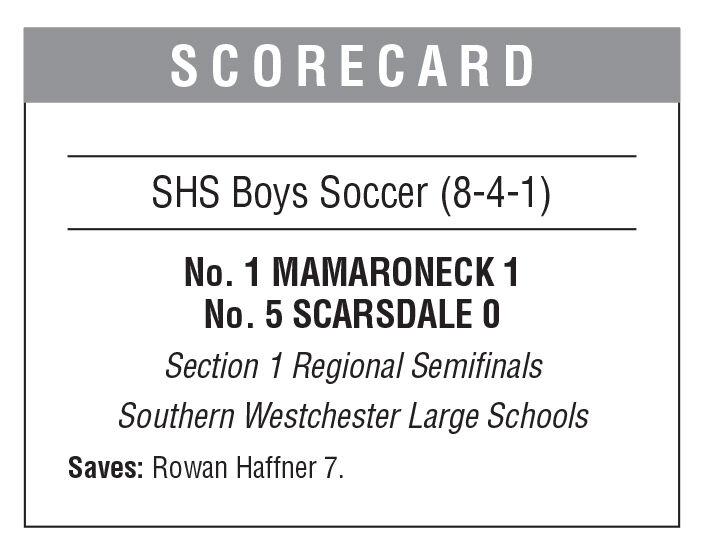 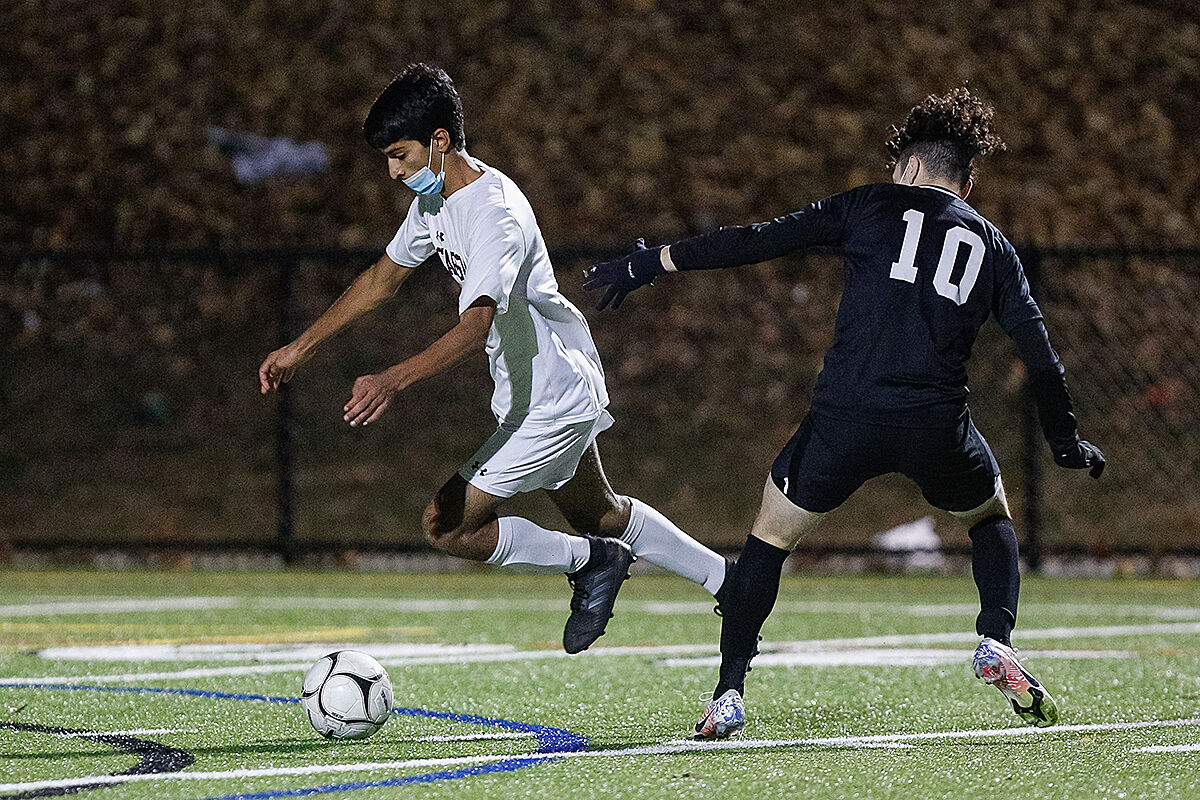 The Scarsdale boys soccer team may not have made the finals, but they sure played like finalists against the top Class AA team in Section 1.

By a 1-0 score, No. 1 Mamaroneck topped the No. 4 Raiders in the Section 1 Southern Westchester Large Schools regional semis before going on to top White Plains 4-1 in the finals.

“I told my boys, now that the dust has settled on the finals, it just goes to show how close you guys were to beating a really, really good team,” coach Marcos Monteagudo said. “I know they got us three times and we didn’t score a goal on them — they were better than us — but we really were one mistake, one counterattack, one corner kick away from beating a really, really good team.”

Having lost to Mamaroneck 1-0 and 2-0 in the regular season, Scarsdale entered the postseason with confidence, knowing they could hang with the best. A third clean sheet shut down Scarsdale’s offense once again.

Sixty-nine minutes into the game, Ariel Solano assisted Milton Mancias Magana for the eventual game-winner as goalie Jackson Karas and his defense kept Scarsdale off the board.

“Mamaroneck was a really good team,” junior Eli Gelblum said. “It was definitely fun to play with them and against them. I’m just proud of the team for sticking with them. I know every time we played them we gave them a scare, which is not something most other teams can say. For us it was finding that final pass, taking that final shot to score the goal.”

Scarsdale was so dedicated as a team and as individuals that after seeing key players deal with 14-day COVID-19 quarantines after being in the wrong classroom at the wrong time, most if not all of the players switched to fully remote learning in order to cut down the risk of having their season cut short.

“That was something they did on their own, but it just goes to show how dedicated they were and how important it was to them to see out their season,” Monteagudo said. “They worked tremendously hard. You can keep Mamaroneck to one goal, which we did twice this season, and that’s pretty impressive. They were one of the better teams we’ve seen in a while — their record shows it, their performance in the final shows it — and we were one of the only teams to give them a hard time this year. Obviously ultimately you want to win, but we’re pretty proud about what we accomplished this year as a program. We made a lot of steps in the right direction.”

Gelblum believed the chemistry the team built in 2019 carried over into 2020 and the skill level, especially of a mostly returning defensive unit, only got better. Adding in new players this fall was smooth and that translated onto the field. “We were all pretty tight,” Gelblum said.

As a newcomer who had played junior varsity as a freshman, sophomore Matthew Choe didn’t expect to make varsity let alone start on defense. He felt the sense of camaraderie right away.

“As a team we got along very well,” Choe said. “We were never shy to give each other advice and communicate with one another. If someone made a mistake we picked them back up and told them what to do next time. We made those changes and that’s what made our team very successful.”

Scarsdale was 8-4-1 this season and didn’t have the rough first half the Raiders have become known for. Instead, after an opening day 2-1 loss to Pelham, a team they topped 3-0 in the quarterfinals, Scarsdale put together a six-game winning streak in the middle of the tumultuous season that saw many stops and starts due to contact tracing within the high school. Monteagudo credited the seniors for taking the lead.

“They set the standard of where we’re going,” he said. “That’s in big part them.”

Juniors Gelblum, Kian Batliwalla, Adrian Lim, Rafa Tassari, Roman Tirabassi, captain Luke Peltz and goalie Rowan Haffner along with sophomores Choe, Nico Galeano and David Wang are a goal-scorer away from being a force within Section 1.

“We’re not returning 13 goals and six assists in Este, so I think we’re going to have to come up with some ideas as a staff to try to fix that,” Monteagudo said. “Other than that we’re really excited about next year.”

He added, “I think the group that’s going to come back is going to come back really hungry and we’re hopeful for a big year next year. I think we’ll struggle to score goals, but we’re going to be really, really, really solid with eight or nine starters from the semifinals coming back with a ton of experience. I think the leadership they saw from the seniors this year will help them be great leaders next year.”

Choe has high hopes for 2021. “With all of us coming back I envision us winning the title next year,” he said. “It’s a big thing to say, but I think we have the talent and hopefully we can make that happen. All of us have that work ethic to win the ball, every single one of us, and that’s a big reason as to why our team has been great this year and I think that will be great in the future.”

The Raiders, however, will never forget the 2020 season that almost wasn’t.

“Generally I think the whole team was grateful to have played this year at all,” Gelblum said. “I know a lot of people didn’t have their season or their seasons were cut short because of COVID, so it was nice we got to play. We’re glad we did.”