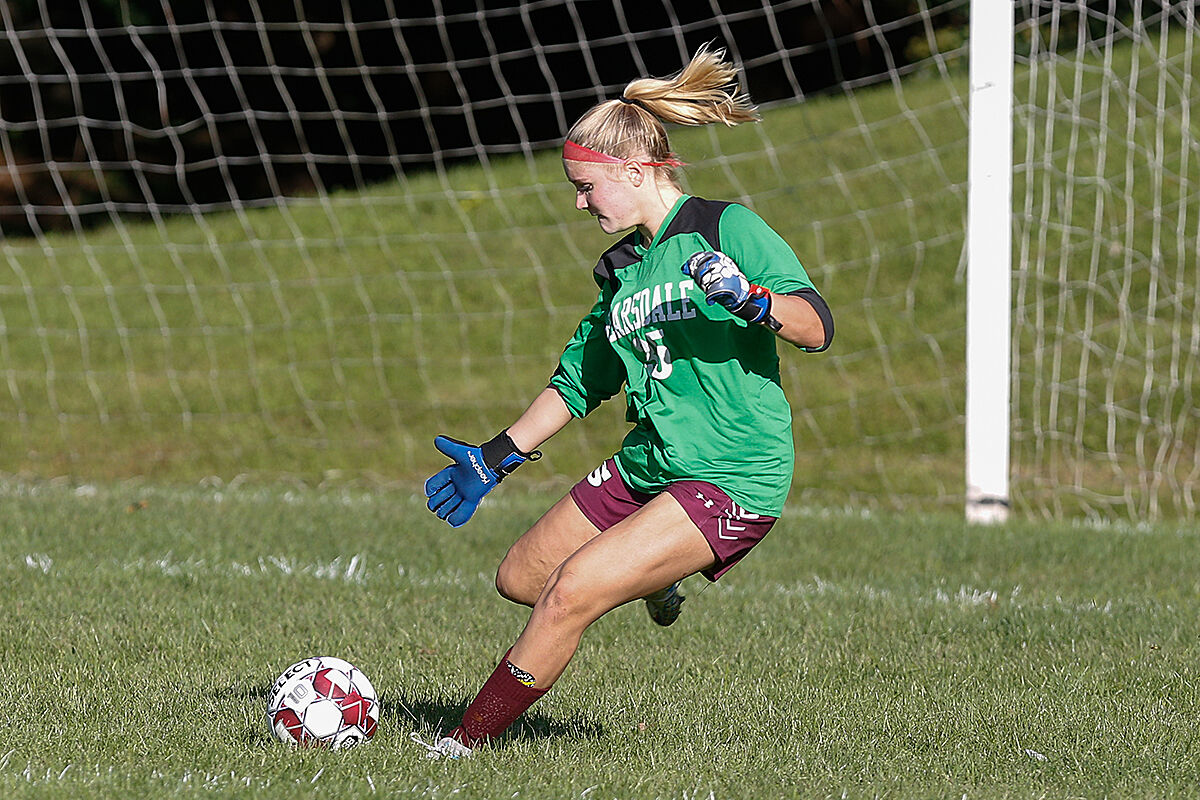 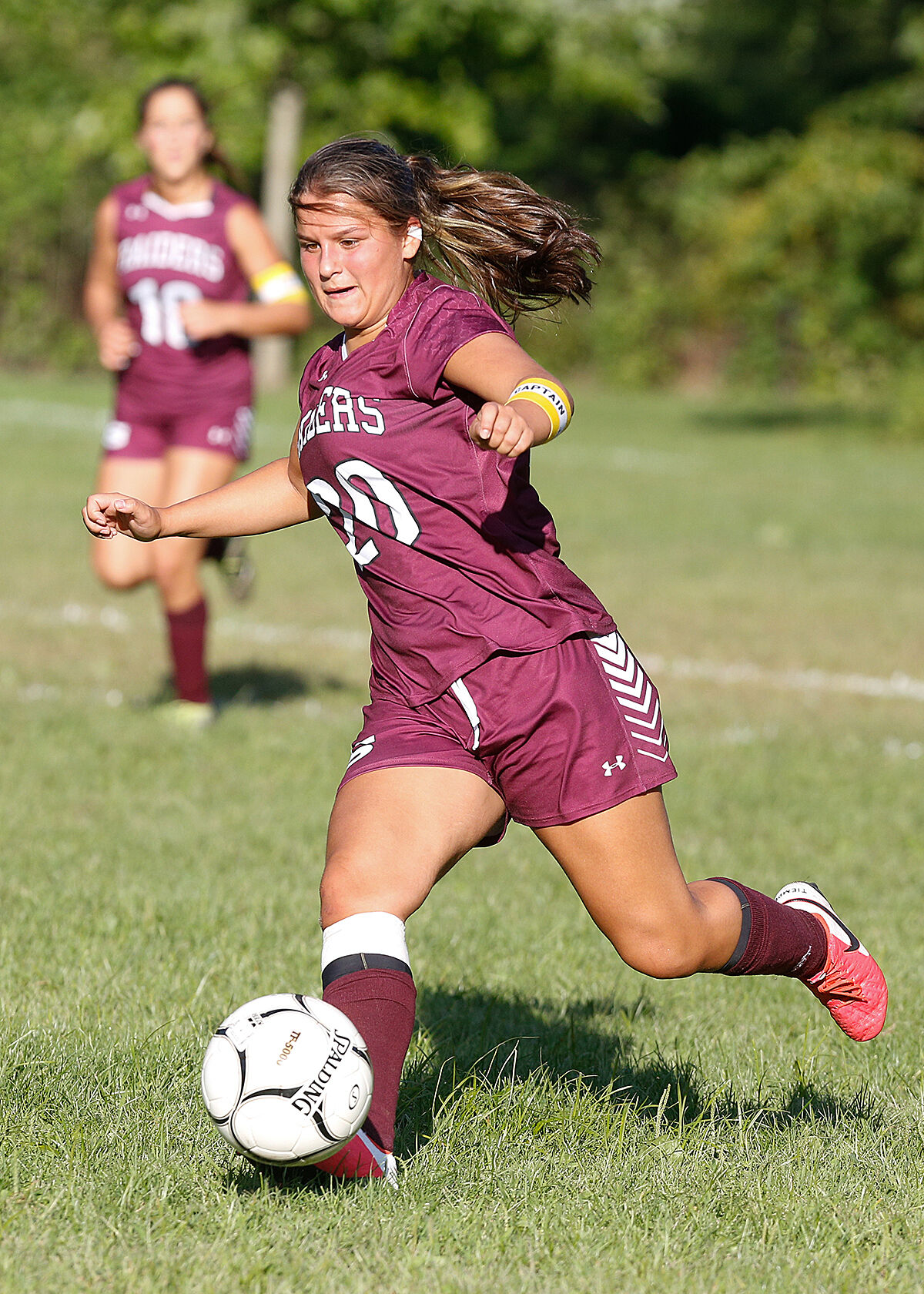 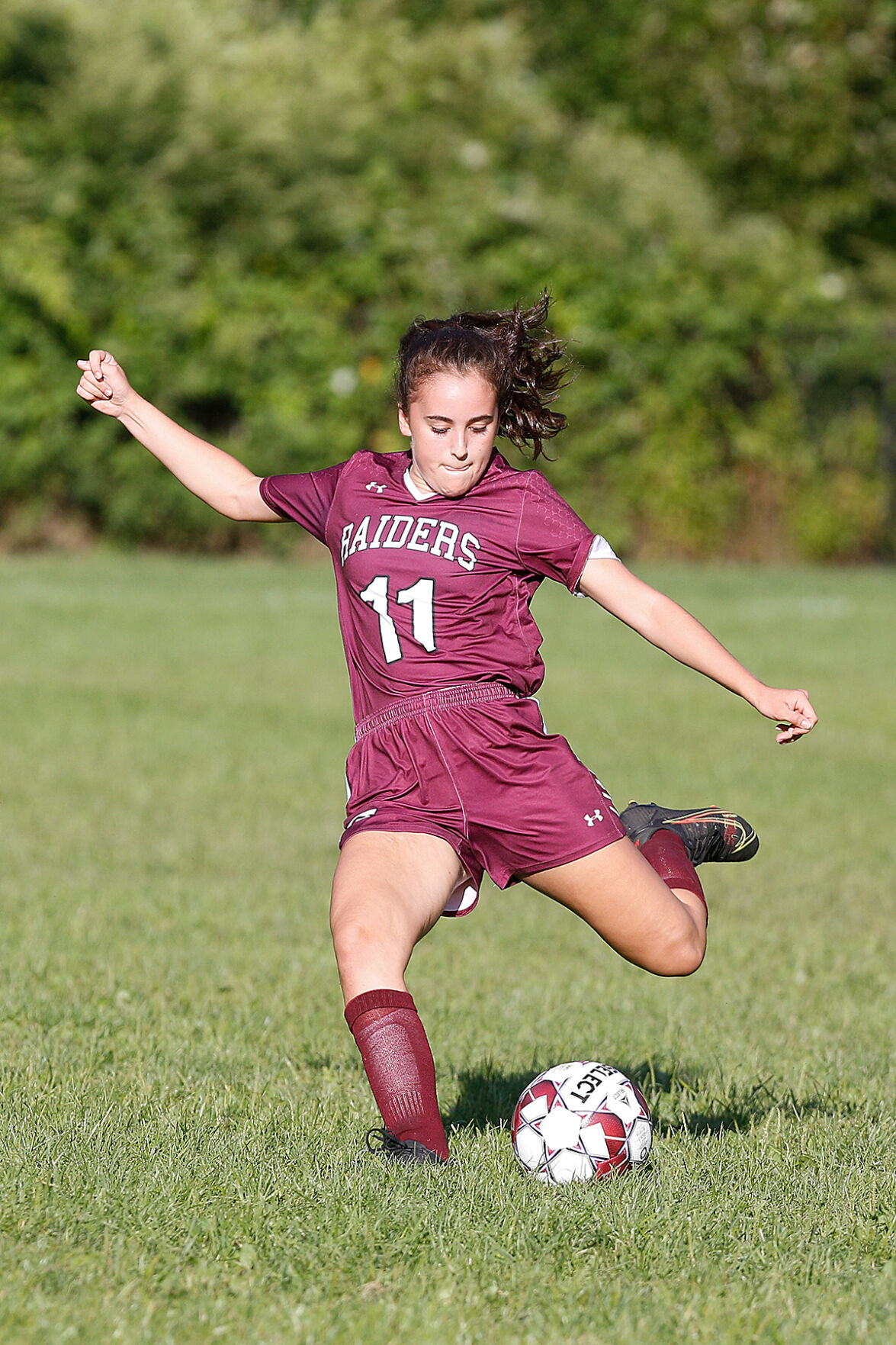 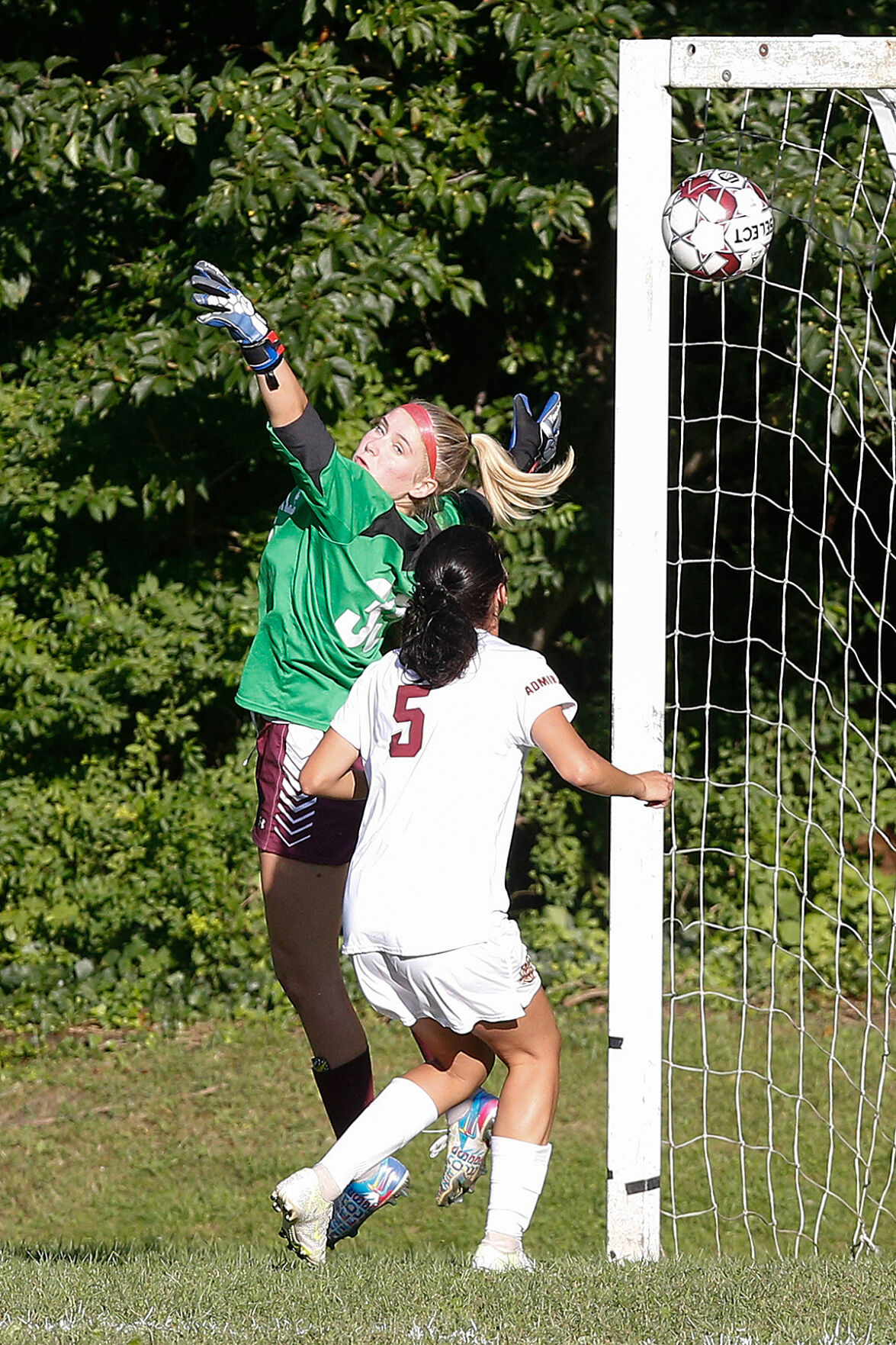 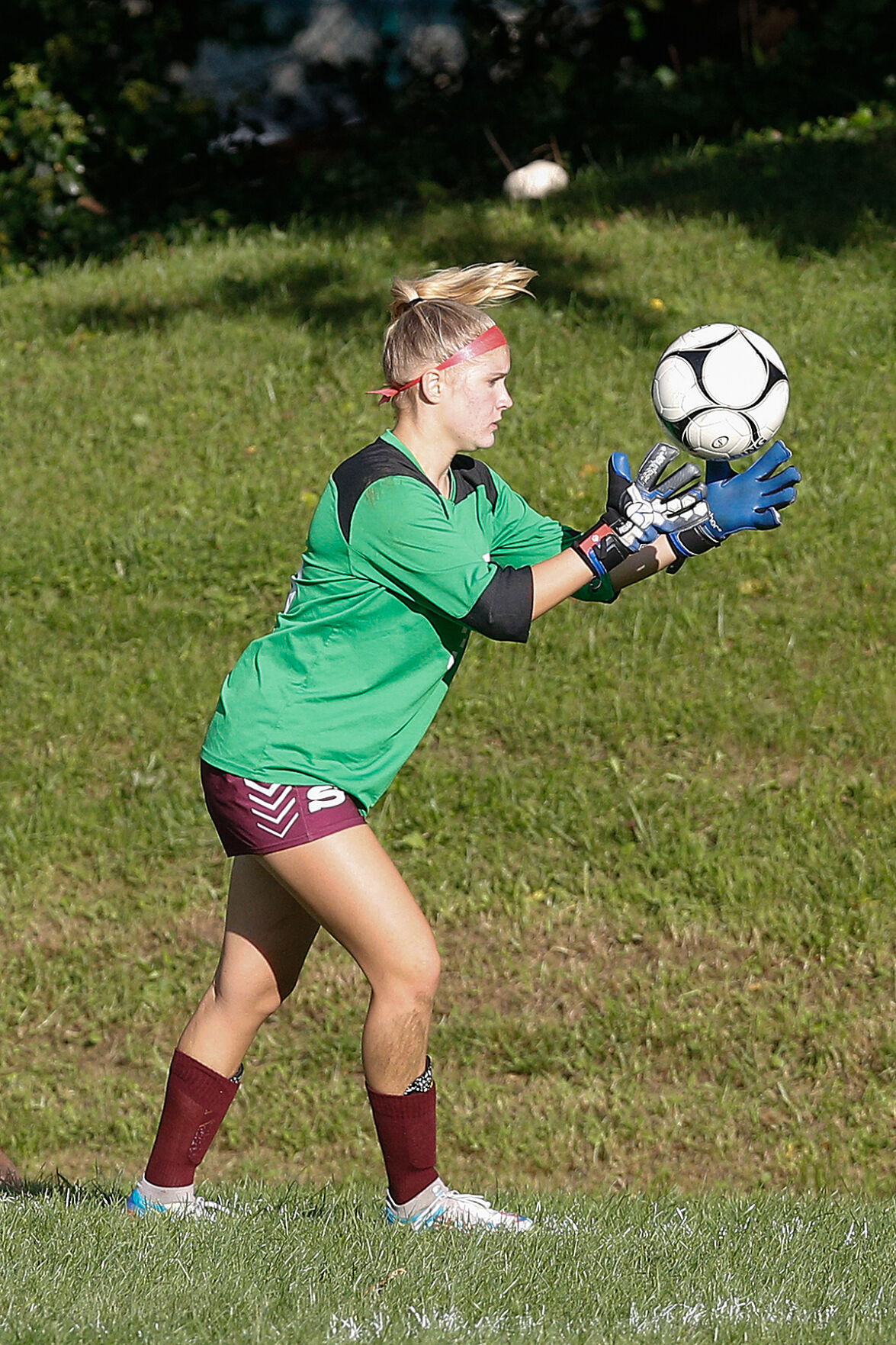 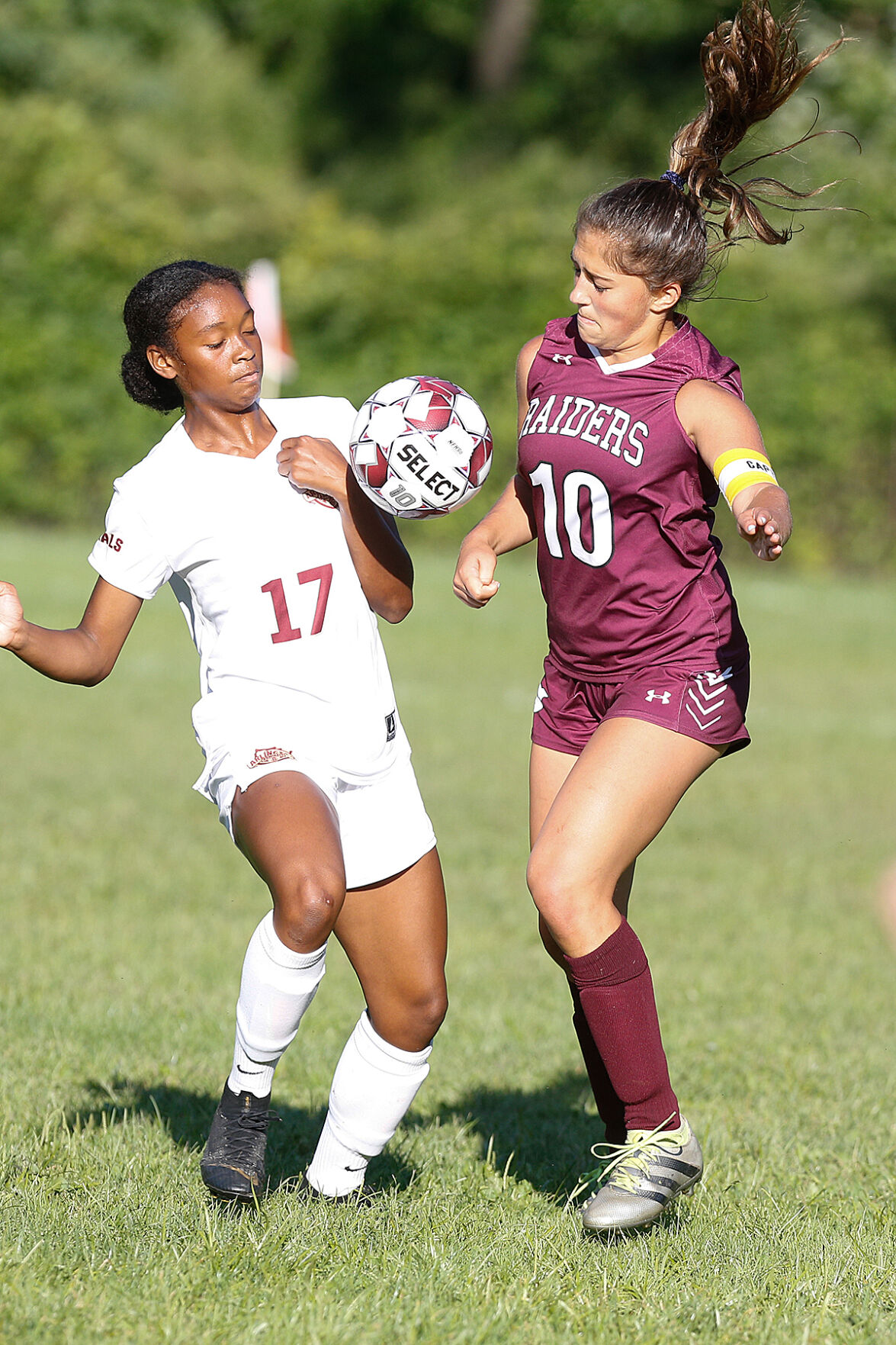 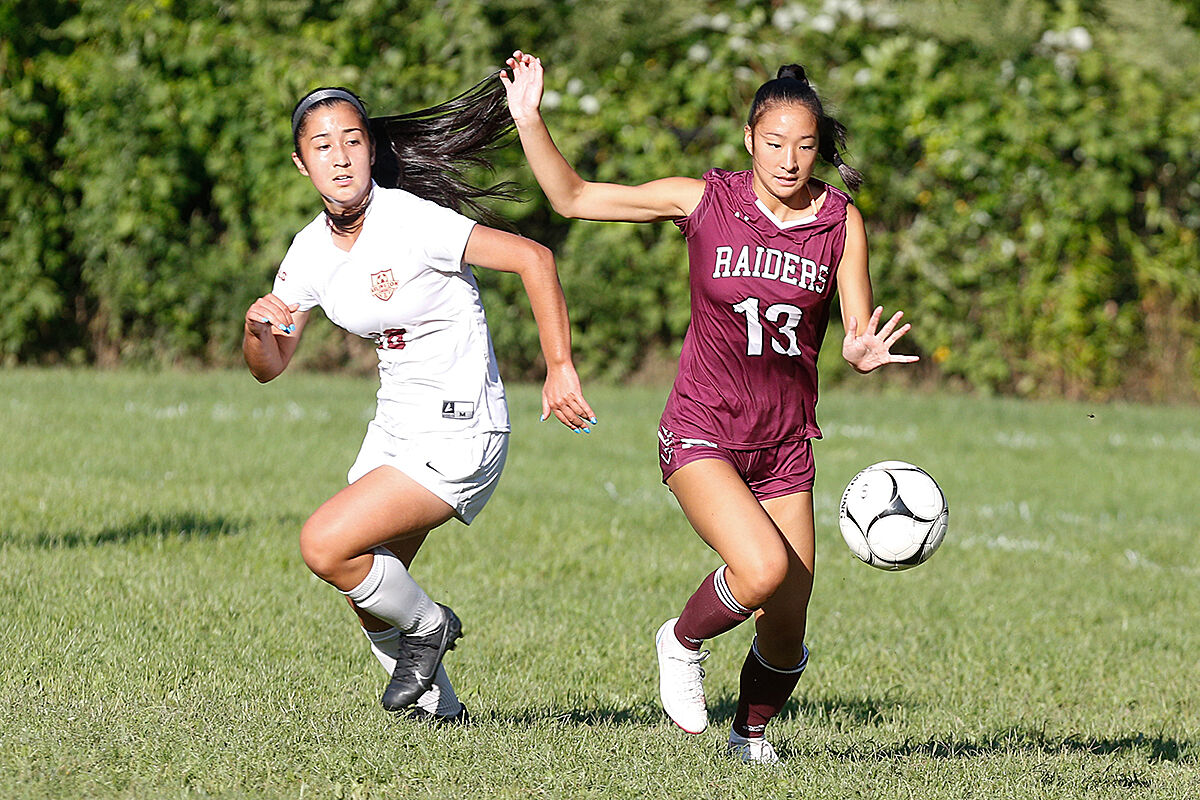 With 22 saves in the first two games, Harpster kept her team from truly lopsided scores in a 5-1 road loss to John Jay-East Fishkill on Sept. 3 and a 3-0 home opener loss to Arlington on Sept. 10.

“Jordan has stepped it up so much,” junior captain Alessia Schettino said after the Arlington game. “She made it freshman year and Dylan Gross was starting and Jordan came back this year and she really came to play. She had 12 more saves today. It was insane. It would have been a lot worse.”

The big one-on-one saves Harpster makes give the team a boost of energy on the field and on the bench. She had a few of those against Arlington that kept the game close until Arlington put up two goals late in the second half.

“Audrey [Gendel] said to us today, ‘You’ve got three years with her!’” assistant coach and goalie specialist Kiera Fox-Turney said. “She does a nice job picking her timing of coming out. We knew Arlington was going to be an offensive high press team, so we wanted to make sure we managed minimizing that, but there were some times where we got beat and Jordan had to face a one v. one and that’s one of those things were the timing helps. She did a nice job. She had a shoulder save, a stomach save. She’s a fearless kid.”

With 12 more saves at home against Bronxville on Sept. 13, Harpster was the team’s highlight reel in a scoreless tie. In the team’s first win of the season the next day, 4-1 over visiting Suffern, Harpster got a break and only needed to make two saves.

“It’s definitely a lot of intensity and I have to play the whole entire game, so it’s a lot of pressure,” Harpster said. “I like it. It’s fun. Making a big save feels awesome because everyone is cheering you on. Everyone is yelling and screaming and it’s crazy.”

Sophomore Elahe Sherrell and senior captain Emily Shawn are the centerbacks, with freshmen Naomi Fischer and Lexi Kiley on the outside, and the defensive unit is working together for the first time with Harpster to become a more cohesive unit.

“They’re doing a good job holding their ground, especially Elahe,” Harpster said. “She’s doing crazy good. A lot of the freshmen are getting to the ball.”

Scarsdale returned only two starters from last year’s Section 1 Westchester Large Schools regional finalist team and has a grueling schedule as always, so the Raiders and their coaches knew there would be some growing pains early on.

“As a new team we really need to learn how to work together,” Schettino said. “We have like 12 new girls and we’ve never played together. We have to get familiar with people and especially in the first few games we have to find our groove and we’re going to do good things.”

“I think we have a lot of young talent and these girls have jelled well as a team,” Fox-Turney said. “They’re already finding each other. They’re bonding and our captains have been doing a good job getting everybody to feel comfortable. It’s a lot of young faces, new faces that have gotten a lot of playing time. It’s nice to see them come in and have freshmen and sophomores go right into the starting lineup and making an impact.”

Following two tough games against JJEF and Arlington, the Raiders liked what they saw defensively and even offensively, knowing they had to start making their shots.

“We need to try to capitalize on shooting,” Schettino said after the Arlington game. “I think we had four shots and they had a lot more. We’re getting the ball up there — we just need to capitalize. We’re struggling, but we’ll get it.”

Against Bronxville the Raiders hit the crossbar four times and had opposing goalie Milly Koenig playing lights out to the tune of 15 saves, making for a frustrating tie.

While they didn’t get the result against Bronxville, playing in a tight game — not just a tight first half like the previous two games — helped Scarsdale build confidence heading into Suffern.

Schettino, assisted by sophomore Brady Silberfein, scored in the opener against John Jay-East Fishkill and then contributed two goals in the win over Suffern, as did junior Olivia Lee. Schettino and junior Lizzie Wachs had assists in that game.

The 1-2-1 Raiders, who have dealt with several injuries so far this season, have Edgemont and North Rockland coming up Friday and Saturday, Sept. 17 and 18.

“We’ve definitely been improving each game and we’re bringing up our game more and more,” Harpster said. “We’re building things up. Especially when the bench is cheering us on, it keeps up the energy and when we have the energy we’ve had some really great plays.”