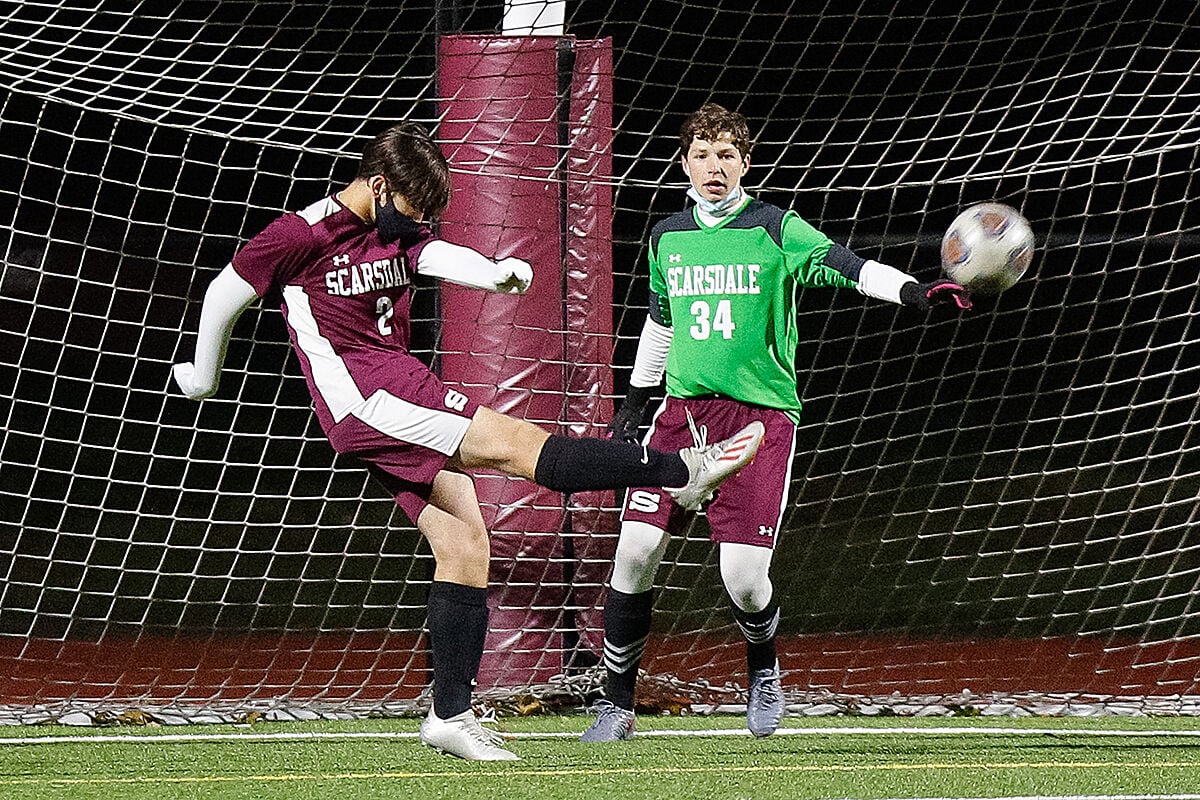 Rafael tassari clears one away in front of Scarsdale goalie Rowan Haffner. 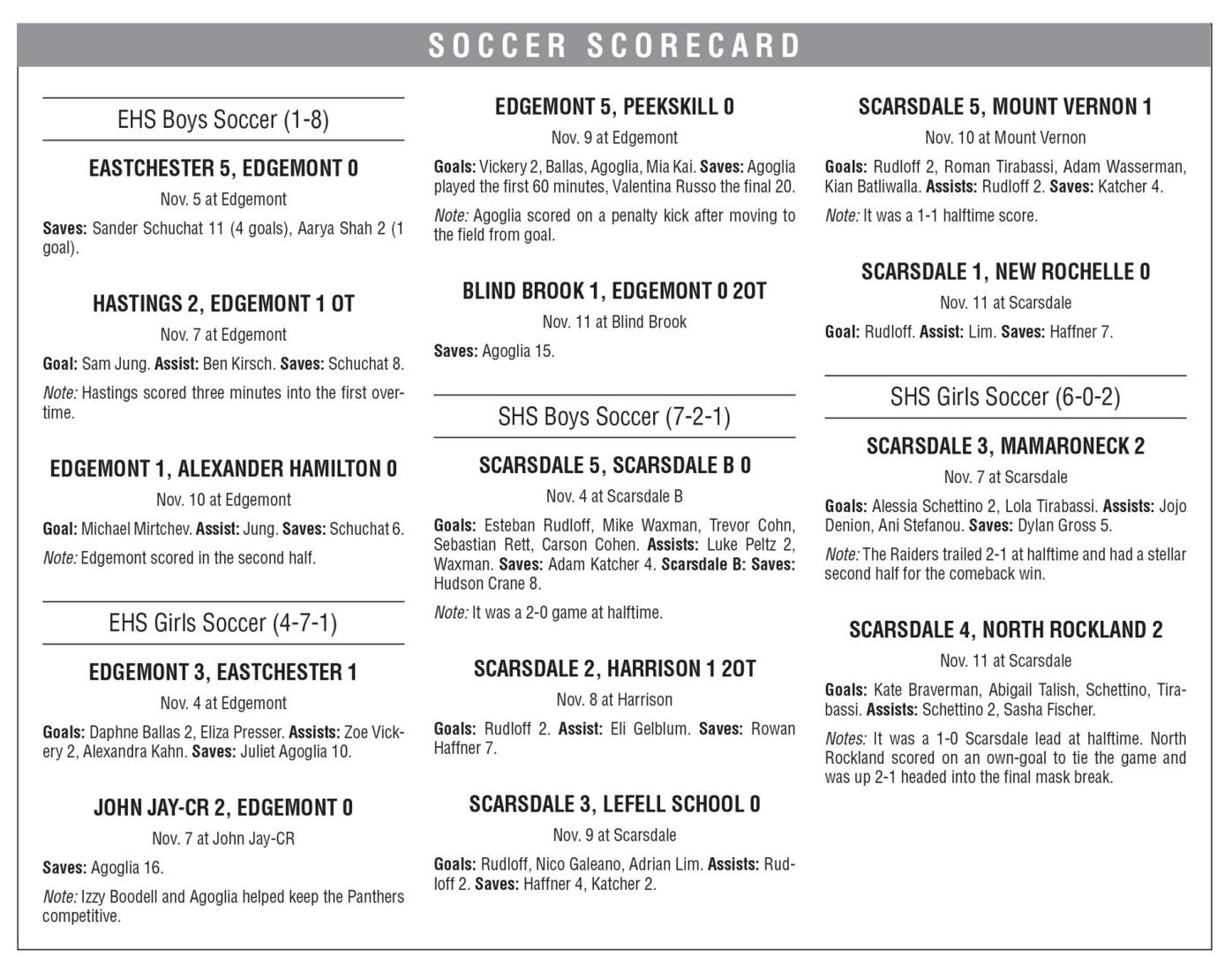 With the Section 1 Southern Westchester Large Schools regional tournaments kicking off next week, the Scarsdale and Edgemont boys and girls soccer teams are showing they are ready for whatever teams they get seeded to face when brackets are released Sunday.

The Scarsdale boys are thriving offensively behind Esteban Rudloff, while goalie Rowan Haffner continues to man the goal capably this season.

“He’s been exactly what we expected him to be,” coach Marcos Monteagudo said. “It’s to the point where we feel really good about anybody we play having him in the net. He makes it that much more difficult for them. He adds a piece to the team that we didn’t have last year and that’s not a knock to the goalies we had last year. He’s just coming from Academy and it shows.”

Haffner has enjoyed playing for the school team for the first time this fall and he’s appreciated the support of his friends and teammates.

“It’s kind of exhilarating to get the chance to play every day,” he said of the constant back-to-back and then some games. “One of the best parts about high school soccer is that it’s one or two months of really intense soccer. Varsity soccer defines your life every day outside of school, but that’s what allows the team to get close and makes it so special.”

Knowing that the Raiders have a reputation as having a slow start to the season, Haffner knew the second half would be key and the Raiders are on a roll at 7-2-1 with one game with Mamaroneck left to play. Haffner and the defense gelled quickly and Haffner has been relying on captains Adam Wasserman and Luke Peltz this season.

“Having a strong defense and playing tight against the top teams has been huge,” Haffner said.

Scarsdale played the varsity B team on Nov. 5, a game that the coaches were concerned about, but turned into a “celebration of the program,” according to Monteagudo, whose team won 5-0.

“It was something they wanted to do only this year,” he said. “It's a game for both teams and you’re limiting exposure. That was the thought process. The kids enjoyed it. It’s something I don’t think we’ll ever do again, but it went better than both myself and [B coach] Pete [Squitieri] had anticipated. We were actually pleasantly surprised at the night.”

It was 2-0 at halftime and everyone on both teams had a chance to play, which made it more memorable. “It ended up being a really nice night,” Monteagudo said.

From Nov. 8-11, the Raiders embarked on a journey that saw them play four games in four days. The highlights were a 2-1 overtime win against Harrison and a 1-0 win over New Rochelle on the 8th and 11th.

Rudloff has scored eight goals in the last six games, including both goals against Harrison and the winner against New Ro.

“We have everyone back from quarantines, from injuries, so we’re right where we were expecting to be at the end of the season in terms of hitting our stride,” Monteagudo said. “We’re just keeping our fingers crossed that the playoffs will happen and that we’ll participate in it. We think we’ll be able to compete with anyone.”

The Scarsdale girls weren’t as busy, but they improved to 6-0-2 with two competitive wins, topping Mamaroneck 3-2 on Nov. 7 and North Rockland 4-2 in the rain Nov. 11.

The first time the Raiders played Mamo, they lost an overtime victory in the final 10 seconds when the Tigers scored the tying goal to make it 2-2. This time around they were down 2-1 — Lola Tirabassi had the first goal — and pulled out a clutch 3-2 victory.

“Coming into this game we were really frustrated from that previous game because we had that win taken right from under us,” senior captain Anastasia Stefanou said. “When we were down in this game we really knew what was at stake. They beat us at our senior game, so it felt good to come back from that. I think we had the heart in this game and that really pushed us ahead.”

Alessia Schettino scored the tying and winning goals to continue her stellar season.

“She’s definitely been a really important goal scorer for us, especially in those close games,” Stefanou said. “She’s really pulled through for us, also against New Rochelle in the 1-1 tie.”

Coach Mindy Genovese has been impressed with Schettino this season.

“She’s only a sophomore and she’s having a phenomenal season,” Genovese said. “I think what she does so well is she shows as a really strong target for us up top. And I think her decision-making has improved so much this season.”

Genovese loves the Scarsdale-Mamaroneck rival and knew a big performance would be a major steppingstone for her team.

“We knew there was a lot on the line and I think more than anything coming back from being down a goal gave the girls the confidence and belief in each other that they can really do this,” Genovese said. “They showed that grit, which was great. It wasn’t the prettiest game, but they got the job done. They showed a lot of heart and perseverance.

The Raiders have been relying on their defensive juggernaut, senior captain Tori Von Redden, who anchors the back line.

“She’s so calm and composed on the ball and that helps to settle everybody,” Genovese said. “When you’re down later in the second half you can become frantic and you end up playing a game that isn’t the game you’ve been trained to play, especially against a team that tends to play more of a long ball than we do. It can be a little disruptive to our game, so having Tori back there to settle everybody is so calming for everybody. She takes that leadership role and doesn’t have the stats — the goals and assists — but she is solid for us back there that when she came out for 10 minutes in the second half it’s noticeable.”

Being undefeated is a big feat for the Raiders, who still have games left against New Rochelle and Mount Vernon to end the regular season with the league title on the line.

“Even though Mamaroneck and New Rochelle are tough rivals for us, showing we can beat Mamaroneck shows where we are right now going into the New Rochelle rematch,” Stefanou said.

With continued improvement in communication and team play, the Edgemont girls have improved to 4-7-1 to end the regular season as the close games continue to be played on a daily basis.

In the most recent stretch, Scarsdale has won 3-1 over Eastchester, lost 2-0 to John Jay-Cross River, beat Peekskill 5-0, and lost 1-0 in double overtime to Blind Brook.

Goalie Juliet Agoglia had double digit saves in the three games other than Peekskill, for a combined 41 stops. She and Izzy Boodell helped keep the team in the game against John Jay.

“She just made a couple of really good saves,” Brand said of Agoglia. “We had some good opportunities to score and their goalie made some really good saves. Juliet is just really solid back there. She was much more focused. It was her most focused game because she really wanted to do well.”

The Panthers made a good impression by competing hard with John Jay this season as Edgemont moved up to Class A for the first time. They will be in different postseason tournaments.

“The John Jay coach told me he’s happy he’s not going to have to see us a third time,” Brand said proudly.

Against Peekskill, Agoglia played the final 20 minutes of the game in the field and scored on a penalty kick. Valentina Russo took her spot in goal, having never played the position before at any level.

“She’s our backup goalie because she’s a really good basketball player and she’s fearless,” Brand said. “I told her from the beginning of the season I’d put her in the goal if we needed her.”

The Panthers had a better showing than they expected in both wins and losses this fall. “The way I see it they basically won all the games we should win and we’ve lost the games that we should probably lose,” Brand said. “Our next step is to win some of the games that people expect us to lose.”

When Edgemont boys soccer coach Mike Cozza looks at his team, he doesn’t see a 1-8 squad. After a 2-1 overtime loss to Hastings, the Panthers rebounded with a 1-0 win over Alexander Hamilton.

“We’re playing well the last five games,” Cozza said. “Four of them were one-goal games, so it’s coming together. Our communication is better and we’re getting more experience each game that goes on. In the beginning of the year the other teams were controlling our midfield and I think now our midfield is controlling the game.

“Our game is all about controlling the midfield, pushing the ball up and then when the other team has it taking the ball away or putting pressure on them with our midfielders.”

The team’s turnaround started when they faced John Jay in a rematch on Halloween and the team hasn’t let up since.

“We put the combination of Sam Jung, Ben Kirsch and Liyam Yaghoobzadeh to help us control the middle of the field,” Cozza said. “Those three start and then off the bench we put Dillon [Bardhi] and we have Michael Mirtchev sometimes in the middle. He’s usually a right midfielder for us, but we also put him in the middle as well.”

Losing to Hastings three minutes into OT was a major blow to Edgemont’s confidence, making the Hamilton win even bigger.

“You just feel bad for the guys leaving it all on the field and not getting rewarded for it,” Cozza said. “Coming out with the Hamilton win was great to see the guys with their heads up after a game rather than their heads down knowing that they played well, but the score wasn’t on our side.

“They were happy. They knew all the hard work they were putting in paid off. They know they’re better than a one-win team.”

“The last five or six games have been the best games of his career and I think we’re feeding off that,” he said. “Will Shah sees that and Sam Feldman is now in the starting lineup. It’s hard taking him out because he goes 110 percent. Dillon Bardhi yesterday played his best game of the year. Sam Jung, his passing is on lately. I think they’re starting to understand if they do their job and their teammates do their own job we are a good team.”

“We preached this week to try to win the week and the Hamilton game put us at 1-0 for the week,” Cozza said. “We have games Thursday and Friday and we have a chance to go into the Monday tournament on a high.”