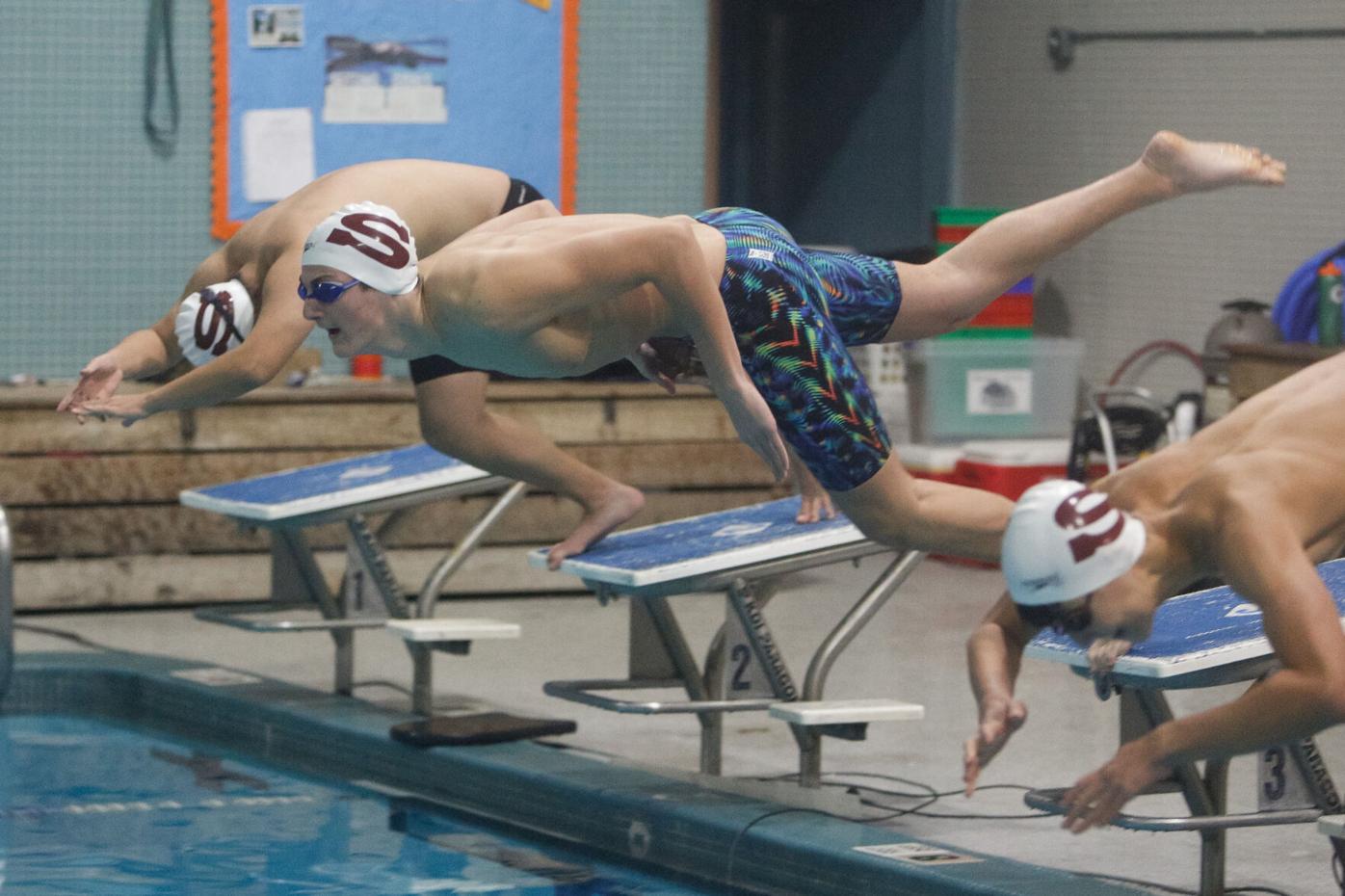 Justin DiSanto is making the most of his senior season of swimming for Scarsdale. He’s set four school records in three meets. 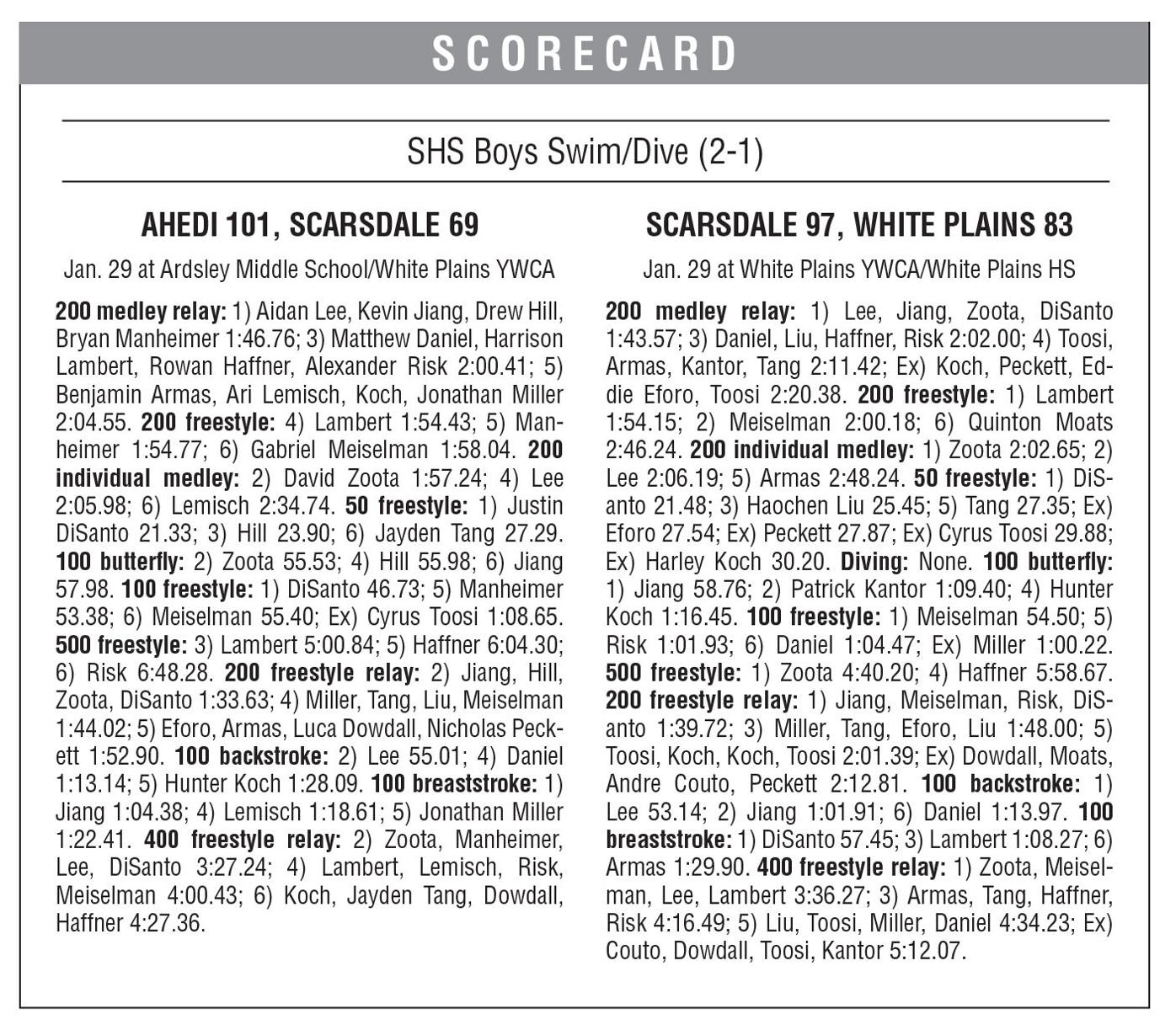 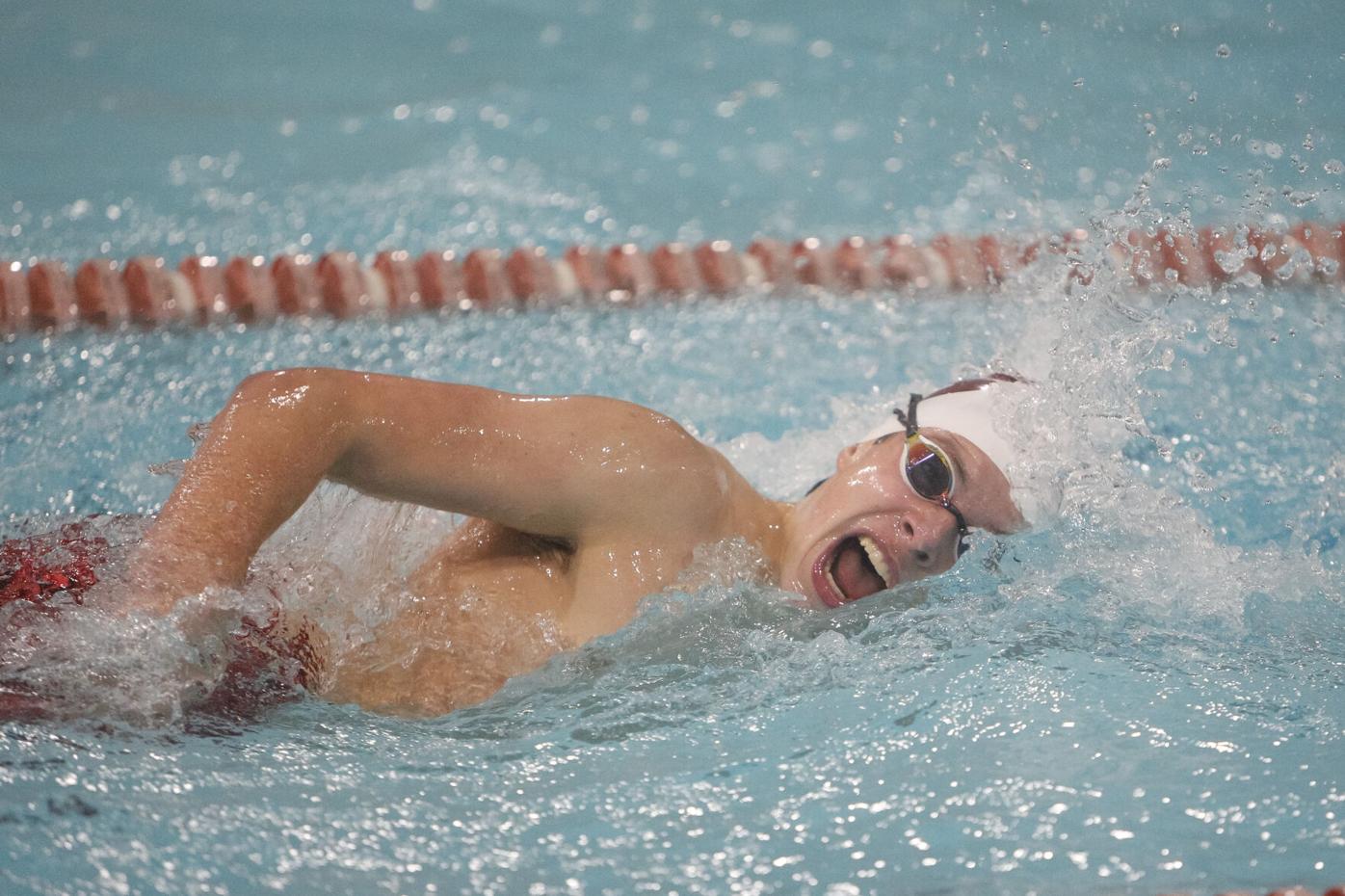 Rowan Haffner helped the Raiders to a victory over White Plains.

High school swimming has 11 events, three relays and eight individual events, while diving has 6- and 11-dive formats. Last year as a junior, Justin DiSanto hit state cuts in seven individual swimming events, showing his diversity as a swimmer as far as both stroke and distance. But what he’s shown through three meets his senior season is for the records books. Literally.

After breaking two school records in the season opener, DiSanto broke one more record in each of the next two meets and he currently owns half the individual school swimming records, in addition to a relay record he helped set his freshman year.

“This school has known and had a history of swimmers and he deserves to be part of the history,” coach Inga DeNunzio said. “To let him go through his senior year without a team it wasn’t in my cards. There was a lot that needed to happen and it happened and I’m mostly glad for him. The team is awesome and I’m so happy for them, but this is his senior year and the section deserves to see what he does.”

Well, they’ll be able to read about what he does since all meets, including championships, are virtual. In person DiSanto is racing his teammates, but at the same time he’s racing other swimmers in other pools around Section 1, plus the record-holders from seasons past.

DiSanto’s personal best in the 200 freestyle is .11 seconds off the oldest record in the book, the 1990 mark of 1:40.83 set by Matt Jaffe. He could also challenge Josh Hendell’s 500 freestyle record of 4:33.52, but DiSanto said he’s not sure if he’s swimming that even this winter.

“He’s a very diverse athlete with amazing talent that he can carve out and do what he needs at that moment,” DeNunzio said. “He’s dialed in and he knows what to do and when to do it. It’s amazing to watch.”

She added, “He could probably do at least two more, but that’s up to him. It’s what he wants at this point.”

The younger swimmers in particular have a great role model in DiSanto.

“It’s not a surprise because he’s very fast and I’m happy for him,” freshman Kevin Jiang said. “I see what he’s been doing. We’re all happy for him, we look to him and we’re inspired.”

Not to be lost in the wins, losses and records are the team’s underclassmen, who have stepped up big this season, all getting a chance to shine for the Raiders. Swimmers like freshmen Jiang, Alexander Risk and Bryan Manheimer, along with returning sophomores Aiden Lee, Gabriel Meiselman and Harrison Lambert have stood out, just to name a few from each class.

Jiang is getting used to varsity swimming, even though it’s “not really the full experience” — he called it “The COVID year” — and he’s already a major contributor with a handful of individual wins and a spot on the top relay teams.

“I really like swimming with these guys and I really like the experience so far,” he said. “I’ve been swimming competitively for a very long time and I think swimming for varsity right now is a good demonstration of what I’ve done in the past years.”

Lee was one of the strong freshmen being touted last year and now he’s excited that another group came up to ensure a strong next few years for Scarsdale.

“We have a lot of good freshmen who are swimming year-round, so it’s good to have them, and we still have good swimmers from past years like Justin,” Lee said. “All the freshmen can see how they’re swimming and then we have them next year and we’ll know their abilities and their best strokes.”

Getting used to varsity doesn’t take that long, but after you’ve been there a year and if you’re like Lee and made states as a freshman you really have a strong perspective of what you can achieve in the sport. The difference this year is since there are no opponents, no lineup cards and no scoring on site, there is less time between events.

Lambert likes the high school team because it’s just that, a team. Club swimming is a different businesslike vibe compared to high school.

“I’m usually swimming for myself, so with the team and the relays there’s a lot of camaraderie that I don’t really get for club,” he said. “I kind of knew that’s what it was about last year and that’s why I decided to join and swim for the school.”

The time off when pools were closed in the spring due to the pandemic gave Lambert time to appreciate what he was missing and he came back to the sport even more energized.

“I’m learning about my confidence,” Lambert said. “I train with some of the older kids on the team outside of this team, so I’ve definitely learned how to be really tough going into a race.”

Not knowing exactly what the team is up against, what the real time score is and how close — or not close — each meet is, DeNunzio is approaching the season by putting her best lineup in the water each day and seeing just where that confidence and toughness takes them.

The Raiders did in fact win, 97-83, after having lost to the combined Ardsley/Hastings/Edgemont/Dobbs Ferry/Irvington team the night before 101-69. In that meet, AHEDI led off with its top 200 medley relay being disqualified, which for all they knew cost them a close meet. In the end it didn’t, but they knew they had to swim hard the rest of the way no matter what. It’s tough to make adjustments when you don’t know the situation.

“Best lineup and they’ve got to use their imagination, their guts and desire to kind of fill in the rest,” DeNunzio said. “Just because you can’t see somebody else there doesn’t mean they’re not there. It’s that clock that they’re really working on right now and they’re doing it with minimal pool time.”

The limited time doesn’t seem to faze the Raiders, or their coach.

“I have these kids and they’re amazing,” DeNunzio said. “I know under those masks they’re smiling and I’m happy about it. As a coach I cannot ask for more. As somebody who has seen half these kids grow up that’s even better.”