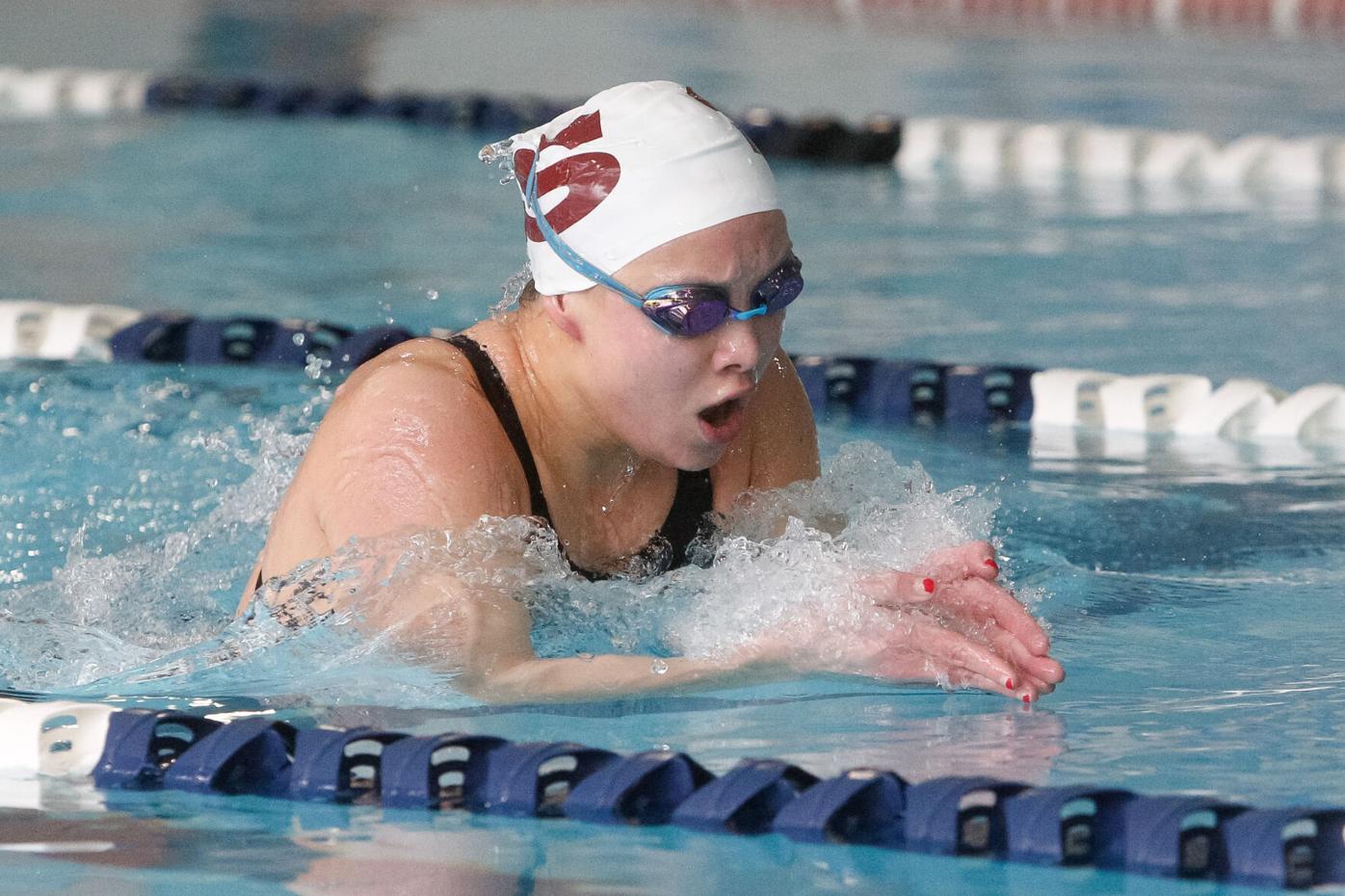 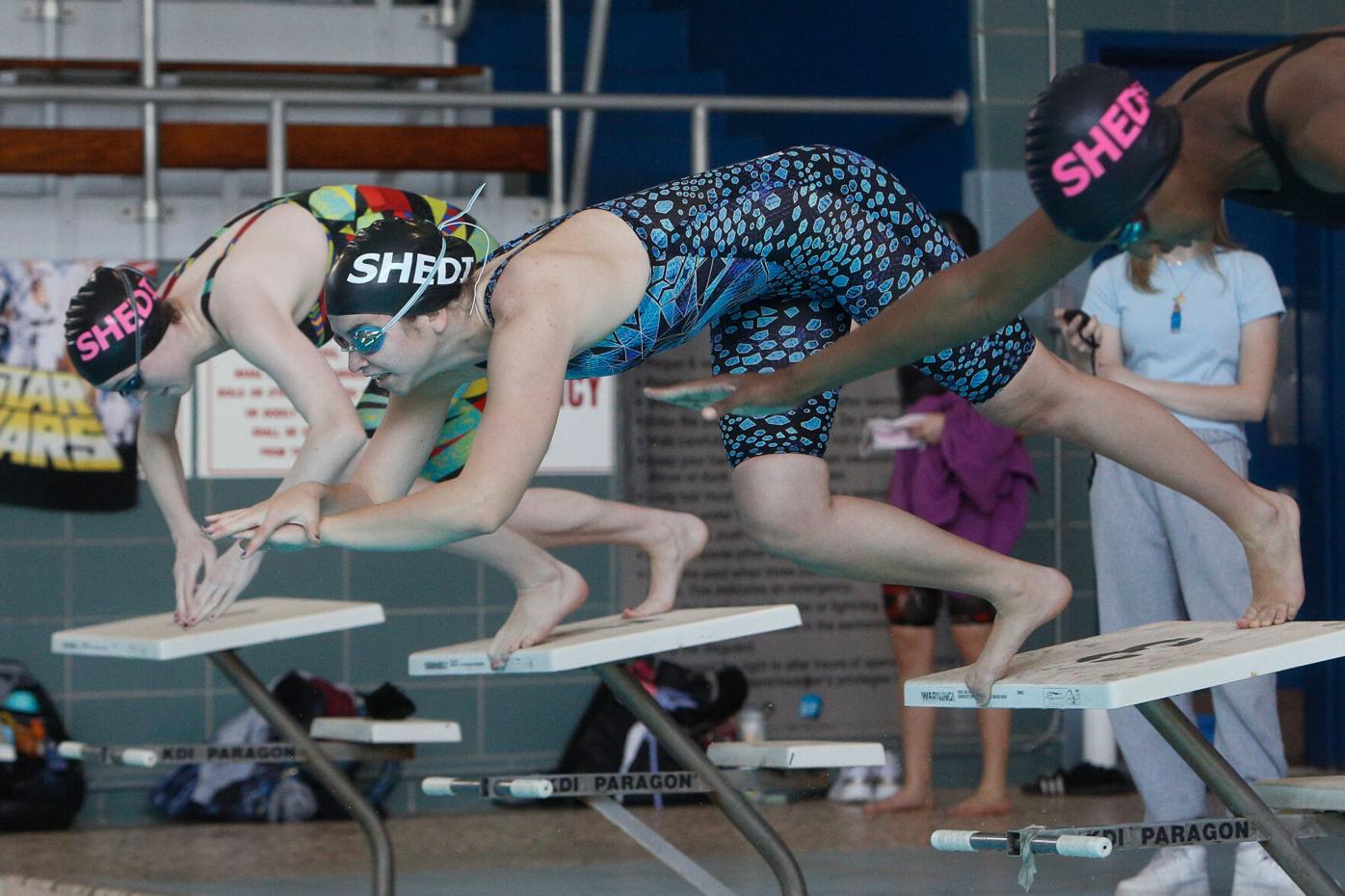 Kate Hoesterey gets off the block in the Section 1 preliminaries. 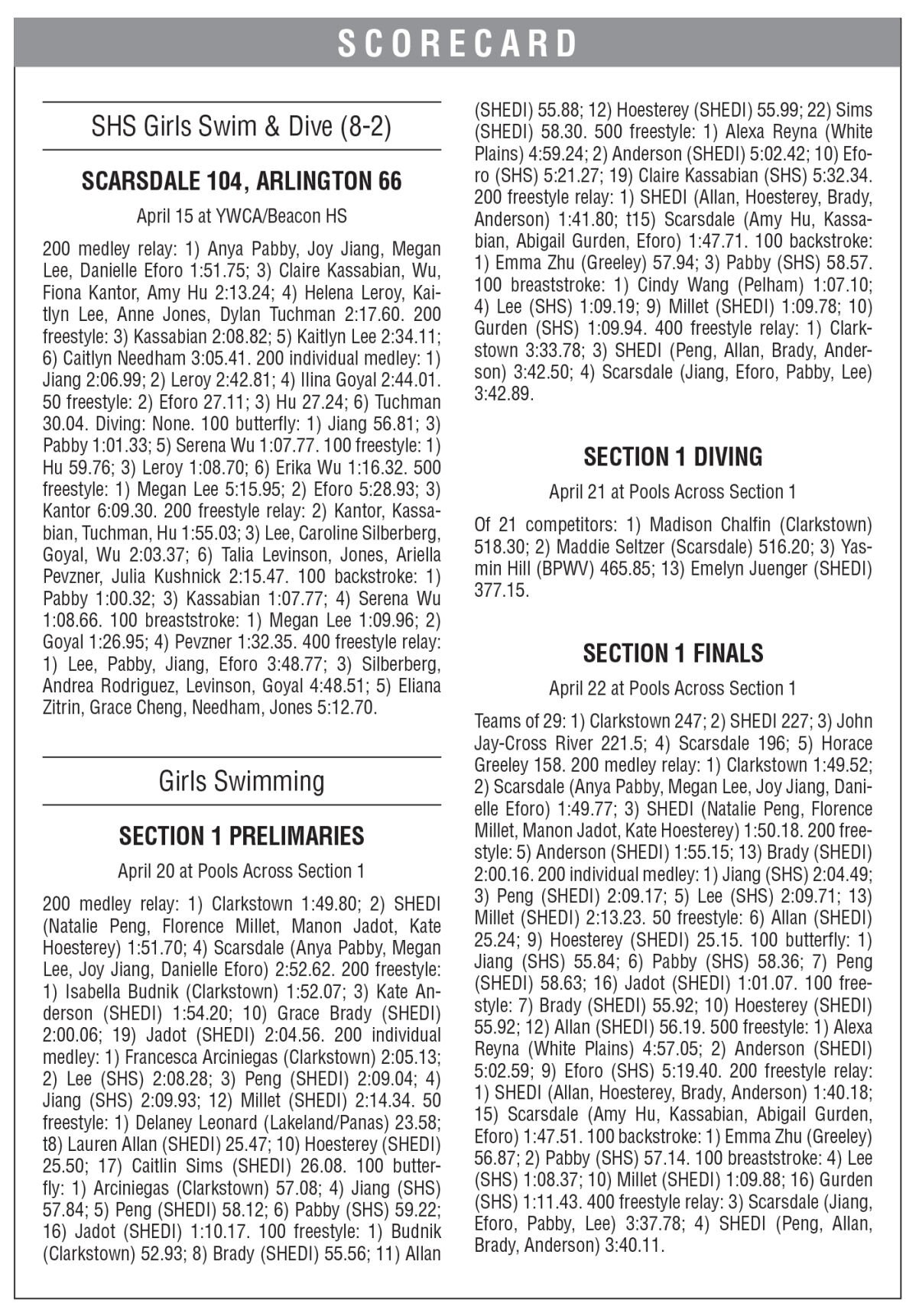 Joy Jiang finished her high school career among the elite Scarsdale swimmers with six individual Section 1 titles, plus one relay title, and all three relay school records, and the 100 backstroke record.

“She’s certainly right up there as one of the best we’ve had,” coach Barney Foltman said. “Joy is right in that circle of the greats.”

No one in Section 1 was better than Jiang in the 100 butterfly as she won the title in that event all four years. As a freshman she was also part of the 200 medley relay title team with Sydney Vleck and classmates Anya Pabby and Megan Lee. As a junior, Jiang also won the 100 backstroke title and in the 100 fly she was the New York State runner-up, third in the Federation. This season, with virtual meets and no state championships, Jiang was still impressive by not only sweeping the 100 fly, but winning the 200 individual medley.

“The 200 IM is definitely not one of my best events, but Foltman spent hours working on the lineup to see what can get us the most amount of points,” Jiang said. “He felt the 200 IM would be it, so it was time to try something new. I’d never done it because my breaststroke is atrocious, so it was so much pressure for me. The fact that I was able to go 2:04, which was my best time, was a shock to me.”

The virtual championship was even more strange than the virtual dual meets because at least with the dual meets your entire team was there and there were at least three lanes of swimmers for each event.

“It was kind of weird because normally all of the excitement from racing comes from actually seeing the people next to you,” Jiang said. “We’re used to racing with hundreds of swimmers at a meet, but there were only eight girls with coaches and officials, so the energy on the pool deck isn’t the same. I understand it was done to keep everybody as safe as possible.”

“Varsity swimming and the four of us making up that relay has been something that we looked forward to and we were super excited about it since we were in eighth grade, so after the meet we all went out to IHOP and celebrated that,” Jiang said.

Jiang, along with fellow seniors Pabby, Lee, Eforo and Seltzer came onto the team in 2017 and helped the team take second in Section 1 that year and sophomore year. Last year they were sixth, this year fourth.

“This year has been kind of crazy to say the least and we were all kind of disappointed we couldn’t win the title, because that’s what we were really going for, but we all did our best given the format of the meet and we’re excited to have finished the season on a pretty good note,” Jiang said.

“This is a special group,” Foltman said. “As a coach you don’t get a group of kids this talented to move through together. They will be sorely missed, but they have left a legacy. When you look at the records, they’re in there with seven of them. Their names are etched in the history of Scarsdale swimming for sure.”

The five seniors will all compete in college next year, a remarkable feat: Jiang at UPenn, Eforo at Wesleyan, Lee at Amherst, Pabby at NYU and Seltzer at Princeton. (See more coverage of Seltzer, who won the Con Ed Scholar-Athlete Award this week, in next week’s Inquirer.)

“This is a very impressive group of kids and it’s been a privilege for me to have been there to witness and be by their side as they accomplished what they did,” Foltman said.

The Raiders also got to see a glimpse of next year with sophomore Abigail Gurden and junior Claire Kassabian qualifying for sectionals in individual events, Kassabian the 500 freestyle preliminaries, Gurden the 100 breaststroke B finals. They were also in the 200 freestyle relay with seniors Amy Hu and Eforo.

“Abigail had a great preliminary and she showed a lot of growth through the year, especially since the last time I’d seen her in the water,” Foltman said. The improvement was remarkable and we’re going to look to her to help us in the future.

“Claire is a perfect example of a really hard worker. She has work ethic, a positive attitude in every practice and gives her best in every event. Her times just improved and improved all through the year right into sectionals. She just missed making the top 16, but I look at that as an opportunity for her that she’s right on the cusp to be there next year.”

The two-time defending Section 1 champion Sleepy Hollow/Hastings/Edgemont/Irvington swim team came close this year, but fell a bit shy of winning a third straight title. Clarkstown won the meet 247-227, but SHEDI did continue its dominance for a third straight year by winning the 200 freestyle relay.

Most remarkably, the only swimmer to have been on all three section title relays in the event in 2018, 2019 and 2021 is Edgemont junior Kate Hoesterey.

“That was so amazing for me,” Hoesterey said. “I was saying to [coach] Tobey [Saracino] that as a freshman I really looked up to all the people who were on that relay and I pushed myself to try to keep up with them and now that I’m the one left and I have to motivate everyone to do the same thing when I was younger, I think we have a really good relay because of that. I was able to lead the team like the older people on the relay did for me. It’s a really good feeling that you’ve accomplished something that many years in a row and hopefully next year the same thing happens for my senior year.”

“I think that was something very difficult for those girls to overcome and Kate took it hard,” Saracino said, adding “She really was a leader to help these girls do what they needed to this year and I’m so incredibly proud of them. Even moving into next year we have girls nipping at Grace Brady’s heels waiting to take over a spot on that relay. It’s exciting to see where they are going to go next year.”

This year Hoesterey was with junior Lauren Allan, who moved from Edgemont to Irvington, Irvington senior Grace Brady and Edgemont sophomore Kate Anderson. They won in 1:40.18.

“It was cool to see these girls step up into the shoes of the other girls and they got five seconds faster,” Saracino said. “Had we gone to states with this relay they thrive on competition and I think we would have seen big drops. It’s very, very hard to be in the water by yourself because nobody else is swimming during that relay and you’re trying to put down the fastest possible time. I think we could have seen a lot faster out of them had we been in a pool with all the other teams and I think that speaks for all of the teams.”

“We were able to spread out the relays and it really worked out well,” Saracino said. “I was very happy with the placing of each — granted I would have loved to have won all of them, but I won’t be greedy. The medley really did a phenomenal job dropping time, especially our eighth grader, Manon Jadot, who went her fastest 50 fly time ever. I am thrilled with how they performed. There was nothing more they could have done in that relay. I am very proud of them and the way they finished.

“The 400 free relay I think they really surprised themselves. Natalie Peng going a 54.4 off a flat start? She was thrilled with that. Kate Anderson coming back with ah 53.6 as a 10th grader, that’s some fast swimming.”

For SHEDI to finish second as a team with only one senior competing in postseason bodes well for the team next year as they return standouts like Edgemont’s Hoesterey, Anderson, eighth grader Jadot and juniors Millet and Peng.

“It’s right around the corner,” Hoesterey said of the next fall season. “It’s crazy that we’re going to be starting preseason in four months. Grace is one of my best friends and it’s a terrible loss, but I see that the team has had huge growth in past years after we’ve lost some seniors and there are a lot of fast up-and-coming swimmers I’m really excited to be with next year. All of the young kids come in and are so impactful the way Kate Anderson and Manon Jadot were with our relays this year. We couldn’t have done it without them. They are still young and I can’t wait to see how they do next year.”

Anderson had her fastest 200 and 500 freestyle times and Saracino knows she can go even faster. “I think she still has much more to give, so I’m excited to see her next season coming off a season swimming open water,” Saracino said. “I think we’ll see a lot more of her, especially with a state championship next year, which fingers crossed we have.”

Peng, who had hit a bit of a wall, was back with a vengeance. “Natalie Peng has finally hit her stride,” Saracino said. “She had a very hard time for a while in a plateau and she’s starting to really work through that where her times are dropping like crazy and she’s seeing times that are making her happy and when you go through that as a swimmer your self-confidence goes up.”

Waiting for the results to be posted was nerve-wracking as the unofficial results didn’t come out until the day after finals.

“Some meets were happening at different times, some even at 9 p.m.,” Hoesterey said. “We couldn’t see the people in the other races, so that definitely made you nervous, but at the same time it pushed you because you knew you had to do your best. If you see someone next to you, you know how fast you have to go, but if you don’t you have to push yourself as hard as you can and hope that’s enough. I think in our case that pushed a lot of our swimmers to do better than they would have. You always have to give 100%.”

The times and places were thrilling in the end, definitely worth the wait.

“I tell them I don’t mind losing if we put up some great times,” Saracino said. “I feel like we could not have done much more than what we did. We earned the place we got and we did it well. I’m very happy with it.”