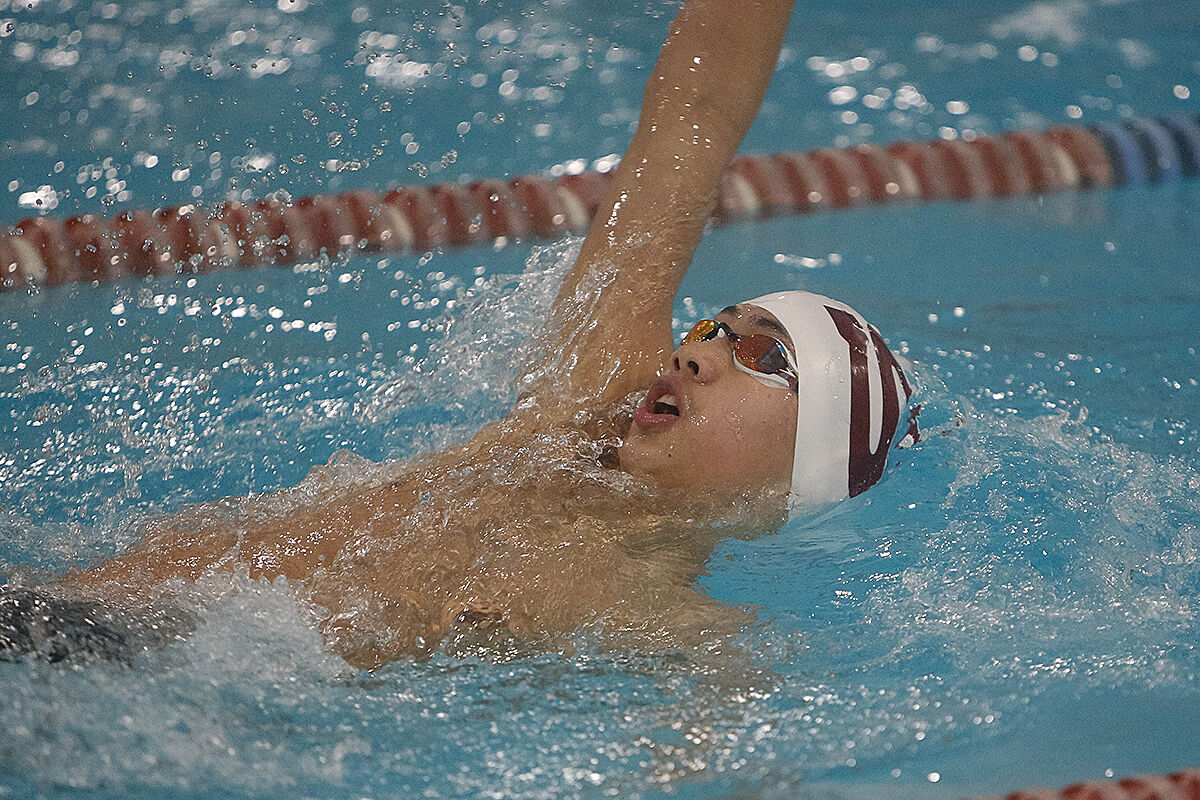 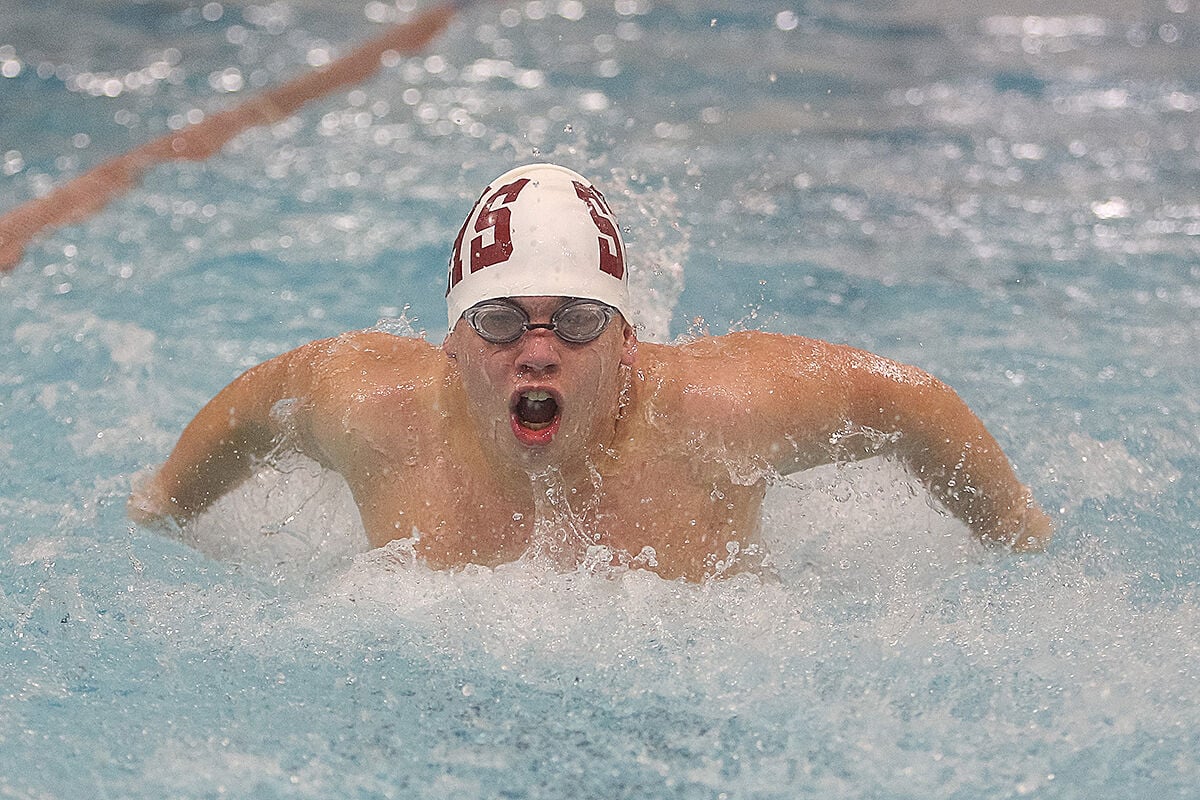 For the Scarsdale boys swim and dive team, keeping competitive relies on a cycle of young talent joining each year. After a bit of a dry spell a few years ago, this year’s junior, sophomore and freshman classes have really brought the Raiders back closer to the elite level by providing depth in the lineup.

Seniors Benjamin Armas, Justin DiSanto, Eddie Eforo, Jackson Landless, Jonah Muller and Brendan Zullo will leave the team in good hands for the future as there is a give and take between the older and younger swimmers on the team.

“We have a lot of juniors and those freshmen and sophomores are really being groomed to take the spots of what’s going to leave us in the next few years,” coach Inga DeNunzio said. “On my end of things watching the newness kind of evolve, it’s going to be fun to be a Scarsdale Raider the next few years.”

Sophomore Gabriel Meiselman’s class provided a big boost to the team as freshmen last year and that hasn’t stopped.

“It was a big power shift to add to that year’s sophomores,” Meiselman said. “And then you add the juniors and seniors. It’s very motivating. You want to be as fast as the older kids, so you try your best.”

Meiselman already sees the cycle in motion. “The freshmen, sophomores and juniors all learn from the seniors,” he said. “As the years go on you move up and you take that initiative when you’re older. It’s a cycle and it will keep going.”

Meiselman admitted, “Having this little competition between ourselves gets us going.”

“All of these kids swim against each other outside of here, but here they are coming together and it’s great to see one pushing the other to get a better time, one helping the other out to get a better spot on the sectional list,” DeNunzio said. “It’s really nice to see some of the older ones say, ‘Hey, stay with me on this first 50,’ and maybe something good can happen. It’s nice to see some of these younger kids be ready to be pulled up.”

DiSanto is in a class of his own right now. The Section 1 champ who will swim for Bucknell next winter owns four individual and one relay school record. He’s the one everyone looks up to and next up is junior single-event record holder David Zoota.

“He’s a great team person, so he is there to help everybody out,” DeNunzio said of Zoota. “When other people see it they’re jumping on it. For him it’s, ‘Let’s bring this together and make everything a little bit better together.’ I think he starts it.”

“The good thing is we have good captains and some of the fast kids are telling kids, ‘Oh, you should do this on the wall,’ or, ‘You should swim like this,’ really giving strategies to help others and they’re passing it along,” Hill said. “And Inga lends so much each year and that helps in developing the team.”

As a freshman, Bryan Manheimer isn’t getting the full experience he’d expected a year ago when he was looking forward to the season as an eighth grader, but his nerves settled down quickly. “I didn’t really know anybody and I’m not really good with meeting new people, but so far it’s been really fun,” he said.

He’s gotten used to the flow of practices and meets and better understands the true inner workings of the team.

“It’s interesting because when you’re young you come and you look up to the older kids and think they’re better and faster,” Manheimer said. “When you come to the realization that you’re faster than some of them you can help push them and they can help you. Everyone on the team can come away feeling good about themselves.”

The Raiders are a unique group in DeNunzio’s eyes.

“It’s great to see a group of guys — and you see it more with the girls — but in boys swimming you don’t always see this camaraderie,” she said. “It’s nice to see and it’s nice to see it grow. It’s only gotten a lot better since I started here. It’s just a nice group of guys.”

“Those are the guys that are ready to take on the section,” she said. “They are looking at other teams. I get a lot of great ideas from them.”

DeNunzio was able to secure one meet for divers Eforo, Liu and freshman Harley Koch, which was a major relief as the team normally has a board at Westchester Community College.

“When we found that out it was just everything,” DeNunzio “That was it. We’re set. Now we have a complete season. It’s one meet, but we’re a swim and dive team, so we needed that.”

Like the regular season, sectionals will also be a virtual meet for swimmers and depending on the event there might only be one swimmer in the pool and there will only be one relay. It will be a race against the clock and the swimmers will have to push themselves like never before as they won’t know what the competition is doing.

“Swimmers are made for that,” DeNunzio said. “For the most part they were built to do that. It’s not like you can see much. You can feel it, so it’s the energy you get they’re going to miss. And the rest. In a three- or four-hour meet you get a lot of rest. I think the events it affects the most are the shorter events. It’s going to be a small amount of time.”

Four meets into the short season the Raiders have taken advantage of every opportunity to compete.

“We definitely have gotten overall better times, which happens as seasons progress,” Hill said. “We have great coaches, great kids and you get better as the season goes on and you hope to reach fast times on every meet and a lot of kids do that.”

Manheimer has enjoyed watching his teammates break personal records throughout the season. Win or lose it’s an extra motivating factor for any swimmer.

“Swimming is interesting,” Manheimer said. “In high school it’s racing against other people, but all the time you’re racing against yourself, racing against the clock. That really pushes you to try to beat your own record. It pushes you mentally and physically and it’s a good workout. It’s a really good sport to take on.”