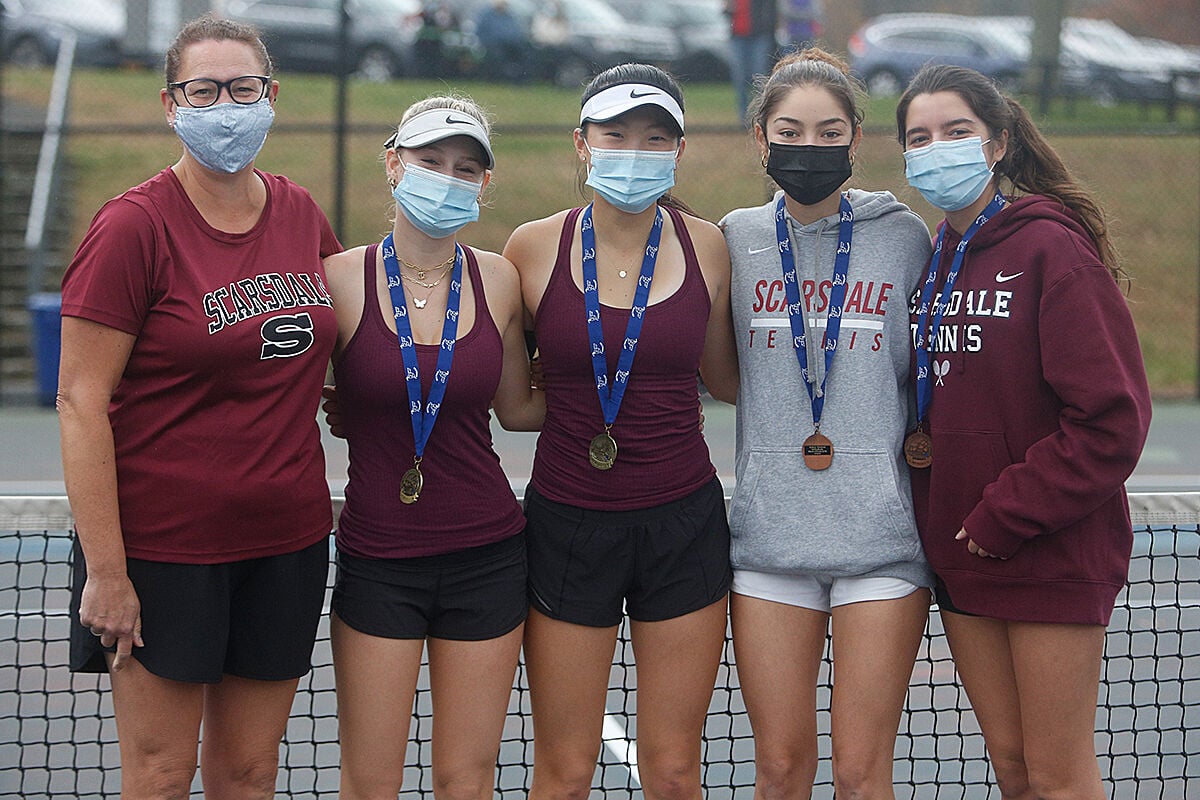 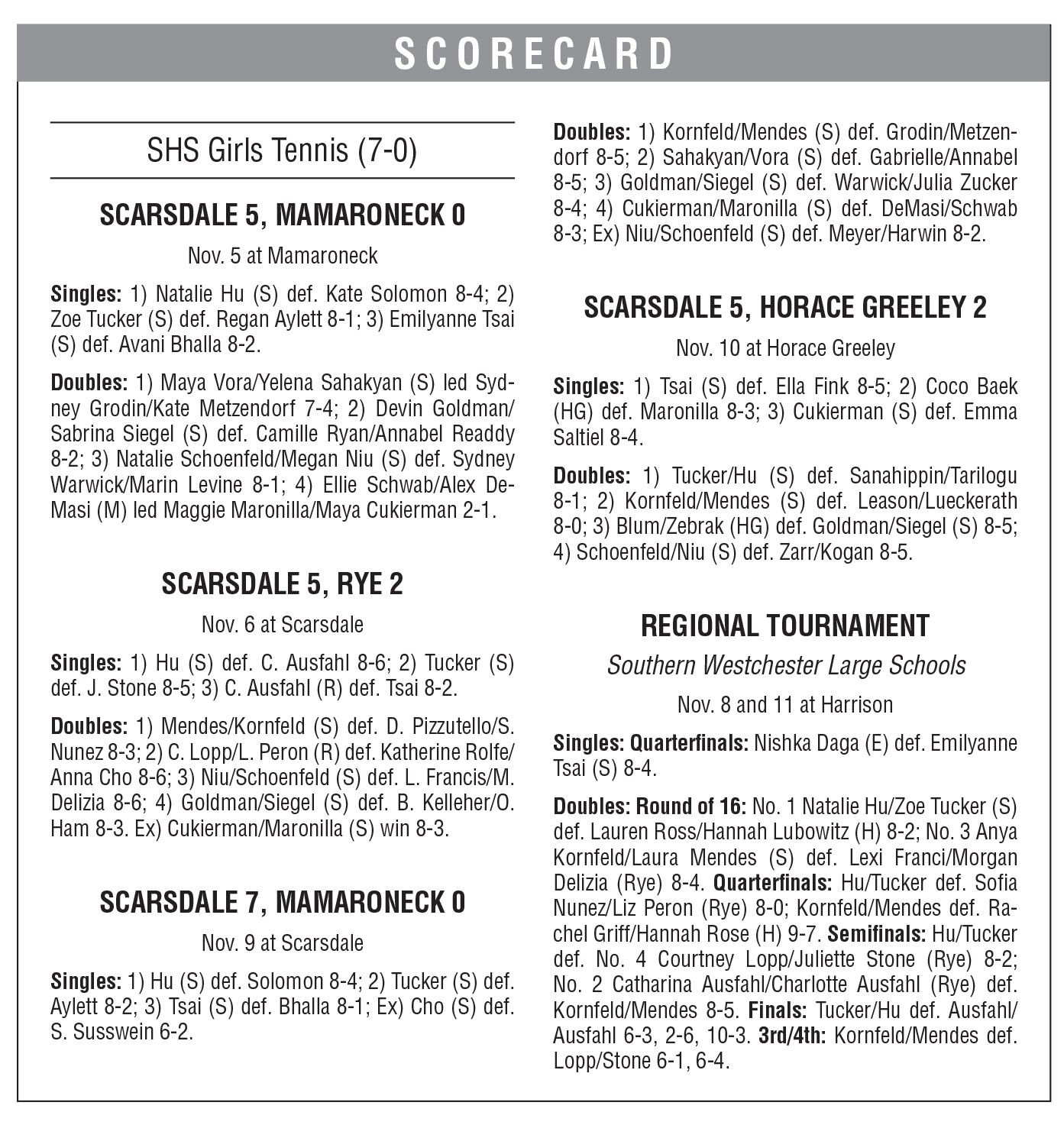 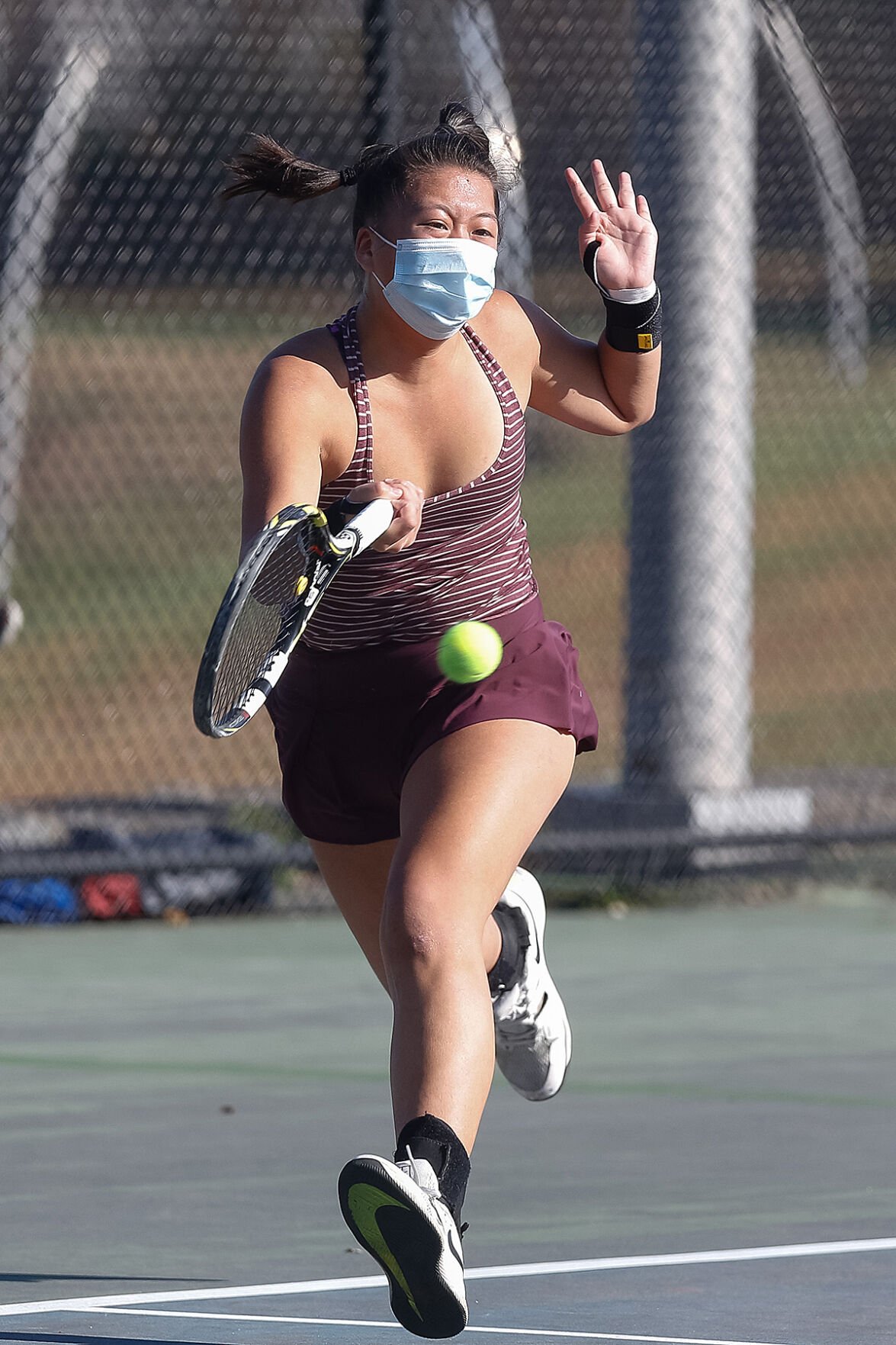 Though it wasn’t the finals of the New York State Championships, it sure felt that way to Scarsdale High School senior Zoe Tucker. Winning the Section 1 Southern Westchester Large Schools doubles tournament with sophomore teammate Natalie Hu was, in this COVID-19 season, the pinnacle of success.

When Tucker and Hu walked away from states having placed eighth last fall, little did they know how much would change in just a year. Despite knowing states were out of the question, the girls focused on having a successful team season — they played No. 1 and 2 singles for the 7-0 Raiders — and joining forces once again for the postseason.

The girls went 4-0 in the regional tournament, winning the finals Wednesday 6-3, 2-6, 10-3 over Rye’s Ausfahl sisters, Catharina and Charlotte.

“This felt like states to me and Natalie and we both put our heart and soul into each match, each point just as if we were at states,” Tucker said. “This was still an amazing opportunity for us and I’m excited for her for next year to hopefully have states.”

Splitting the first two sets made for an exciting match.

“Losing the second set wasn’t about energy, but about a shift in momentum,” Tucker said. “Our points were still intense in the second set, so I knew it could go either way. It wasn’t completely negative because we came back in the tiebreaker and we killed it. I was just so happy.”

Going to a super tiebreaker for the finals was nerve-wracking after playing so well in the first set.

“It was really stressful but we knew we had to have confidence and play,” Hu said. “We knew we could do it. We knew we could win and we put our heart into it basically. I’m really sad we’re not going to play doubles together after this.”

Playing 8-game pro sets for the first three rounds Sunday, Nov. 8, Tucker and Hu won 24-4. “On Sunday we played really well, so that built our confidence for today,” Hu said.

The only break Hu took off from training was when COVID-19 hit in March until May, when she was able to get back on the courts.

“Zoe and I were training the whole summer really hard,” she said. “We definitely got better and I think I improved my mental game a lot. I’m really proud of that.”

It was the end of a two-year era for Tucker and Hu. Tucker hopes to play club in college and Hu has two more years of varsity before she has to make her own future plans.

“I don’t see this as the end of tennis for me,” Tucker said. “I see this as a new chapter and I think Natalie should feel the same way. This was the best right here, so we both had a really good run.”

Coach Jennifer Roane knew the No. 1 seed was “on a mission” this fall after last year’s accomplishment. “Being as our state tournament was canceled, I think their mission was that whatever tournament there is, they wanted to win the whole thing,” Roane said. “They were driven last year, but I could see a little bit more of a laser focus this year.”

The duo communicated well and supported each other.

“There were a few times Natalie missed a shot at the net or there was a time Zoe’s serves didn’t go in and they were there for each other,” Roane said. “They were like, ‘Forget it,’ and they’d move on to the next one. I’ve had doubles teams that when everything is going well it’s going well, but when things don't go well you can see it. They take ownership of it when they make a mistake and they’re also there to support their partner.”

In the third-place match, senior Anya Kornfeld and junior Laura Mendes topped Rye’s Courtney Lopp and Juliette Stone 6-1, 6-4 as all four seeds held in the tournament.

“Both of them you could see they were driven,” Roane said. “They were high-fiving each other — with their rackets — and they were yelling after every point. And this was the first year they’ve played together and in a postseason event. A lot people at the tournament were like, ‘Wow, those two are amazing.’ I said, ‘Yeah, that’s why they’re my first doubles.’”

Kornfeld moved from singles to first doubles this fall and though it was a major change, she made it seem like a smooth transition.

“This is really my first opportunity to play doubles because since freshman year I had been a singles player,” she said. “It was definitely a transition. I had to kind of find my pace. Doubles is a very different game than singles. It was difficult at first, but I knew coming in I would be playing with Laura and we played year-round, so it was a natural match for us. It took a couple of games and practices to get back into it, but it ended up being a lot of fun. I’m happy with how we played in the end.”

While Mendes was more accustomed to playing doubles, she spent the last two years partnered with her older sister, Luisa, so taking on a new partner was her challenge. The Mendes sisters had their own language — not just tennis-wise, but Portuguese as they are from Brazil — and their own tactics.

“Playing with Anya was completely different and in the beginning it was a bit rough, but we played through it to the end,” Mendes said. “We learned each other’s strengths and weaknesses and I think we worked well together. Our communication was great and that’s what made us successful.”

The duo spent the season developing their chemistry on and off the court and it paid off with a season-ending 3-1 record in the tournament. Mendes, the team’s lone junior, spent three years with the team’s large senior class and will miss all of them.

“I’m very thankful that we had a season and I was able to find someone that I liked playing with,” she said. “It was very different than what we had last year, but I still think we had a great season and played well. There’s going to be new players, which is exciting, though it’s sad all nine have to go.”

Kornfeld, like Tucker, was happy just to have a senior season.

“It was certainly memorable, very different than normal,” she said. “It started so late and we normally start in August when it’s super hot outside and school hasn’t started yet and that’s always a lot of fun. We didn’t know up until the week before if we’d have a season, so it was definitely different. We had some matches where we were all bundled up with handwarmers, which was crazy. And now here we got lucky with the weather — I’m standing here in shorts and it’s mid-November. I’m just really glad I got to play.”

Senior Emilyanne Tsai played third singles this year and entered the postseason singles tournament. She fell in the first round to Edgemont up-and-coming freshman Nishka Daga.

Tsai, who played with braces on both wrists, has been battling injuries throughout her four-year varsity career.

“She kept fighting and she kept playing the sport of tennis,” Roane said. “I think she had a good year. She took Anya Kornfeld’s spot at third singles. Even though it’s her senior year she didn’t just say, ‘Hey, I’ll just stay doubles.’ She wanted to play singles and I’m sure she worked hard over the summer and got that position. She’s been a great asset to the team and she’s going to be playing in college.”

The Raiders, featuring seniors Anna Cho, Devin Goldman, Megan Niu, Katherine Rolfe, Natalie Schoenfeld, Sabrina Siegel, Kornfeld, Tsai and Tucker were supposed to end their regular season Thursday, Nov. 12, but school closed down for COVID-19 contact tracing that day. Coach Roane wasn’t sure if the match would be made up. Scarsdale at that point was 7-0 and looking to win a league title with a second straight unbeaten season.

“I can’t believe the season was as good as it was,” Tucker said. “It was so intense — everyone’s energy was there. We were all so happy to be on the court from that first match. I could tell the season was going to be amazing and now standing here at the end of the season I’m so thankful for everyone’s intensity, energy, positivity. Everyone was there to the end.”