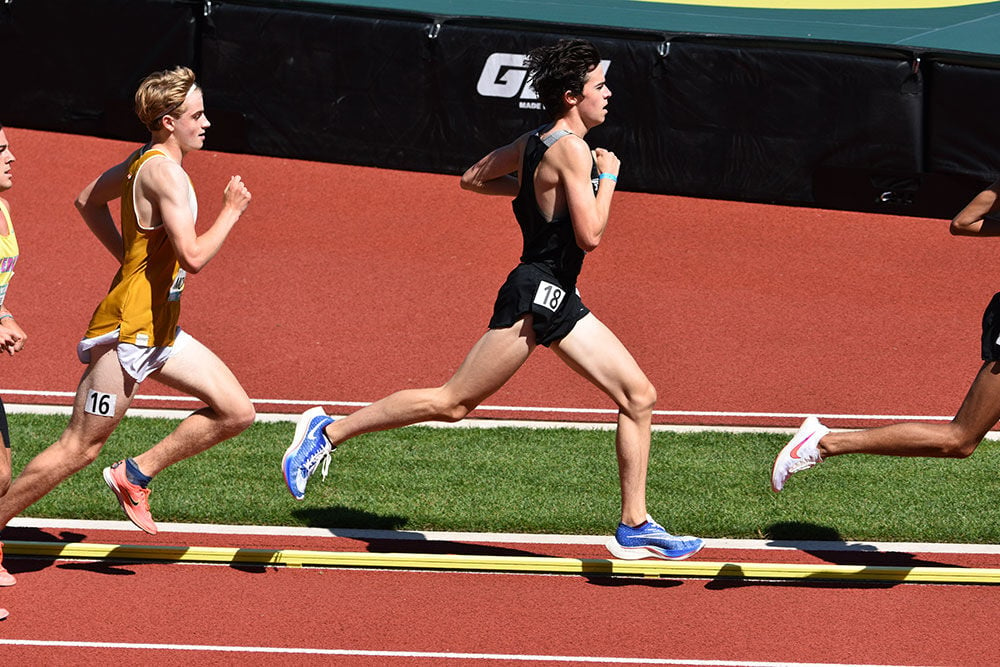 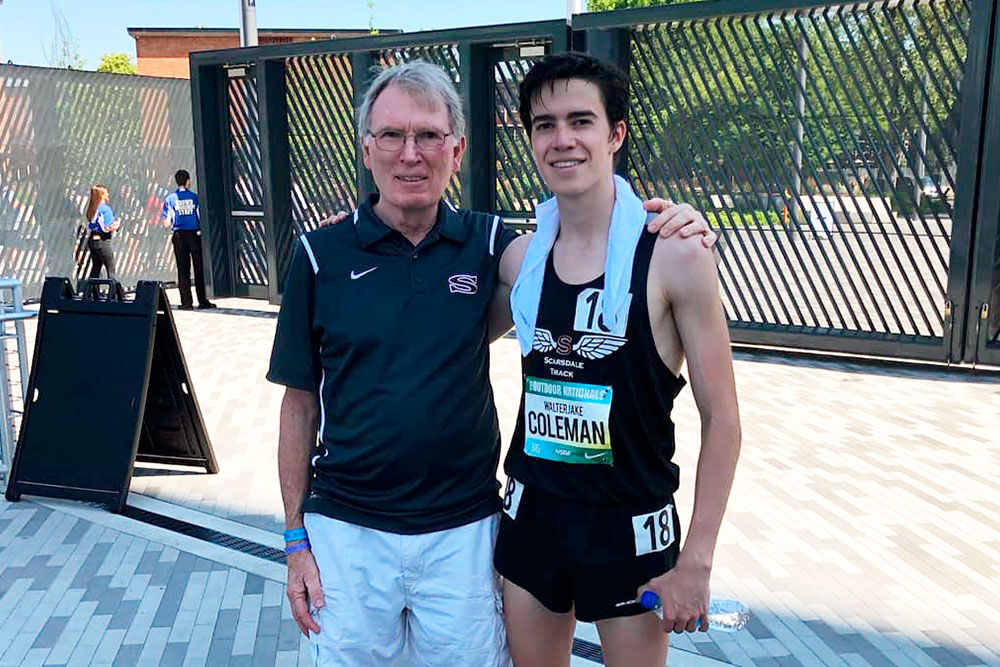 Coach Rich Clark and Jake Coleman at nationals in Oregon.

After running modified cross-country and spring track as an eighth grader, Jake Coleman thought he was a sprinter. By the end of freshman year that would change and his distance running would take him places he never thought imaginable at times he thought he could only dream of.

With COVID-19 stripping Coleman of four chances to run in a New York State championship meet, the recent graduate solidified his place in Scarsdale High School history by breaking a longstanding school record at Nike Outdoor Nationals, the final meet of his high school career.

“I remember coaching against Scarsdale when I was at JFK and they had some really good distance runners and Metz was one of them,” coach Rich Clark said. “Jake was down a little bit and I told him, ‘By the way, it’s a school record.’ Then he had a big grin on his face.”

It wasn’t an easy path for Coleman to get to this point — in more ways than one — as it took him almost a day and a half to travel to Oregon after delayed and missed flights. Still, he managed to get a good night’s sleep before his 10:30 a.m. race on July 3.

“I had never run at a state meet before, so jumping to nationals was kind of crazy for me,” Coleman said. “There were no state meets this year. I had some friends that ran and it was fun watching them in previous years, but it was cool for me to be able to go.”

The competition was fierce with Simon Saia of Niwot High School in Colorado winning in 14:30.66.

“It was the first time I was running a 5K on a track, the longest I’ve ever run on one,” Coleman said. “It was just fun to be there. I was so happy I qualified and the school record was an added bonus.”

The recently retired Clark making the long journey to Oregon meant a lot to Coleman. It was a last hurrah for both and Clark credited Coleman’s “determination” for getting them there.

“He’s been a great coach and mentor,” Coleman said. “I was really happy he came with me. It really touched my heart. I’m glad I qualified because when I qualified I saw how happy he was that I made it. It’s his last high school race to watch as a coach and I’m happy I could do that for him.”

While Clark had Coleman’s brothers for freshman bio, he didn’t have the youngest until senior year environmental science.

“His work was impeccable and that’s the way he did his running,” Clark said. “You never had to coax him or ask if he did this or that. Never. He worked hard. The guy was amazing and what a way to end my coaching career and his high school career. It was just a joy.”

Coleman, who had played sports like football, basketball and baseball, joined cross-country in eight grade to run with friends, though the only one who saw it through to senior year alongside him was Alexandre Friedman. He continued with modified spring track, where he focused on the 100- and 200-meter runs. When Coleman started working with Coach Clark freshman year he started to find himself as a runner. “I saw a lot of growth the first two weeks when I was under Mr. Clark’s training and I fell in love with it,” Coleman said. “When I hit five minutes in the mile my freshman year I realized I was pretty OK at this. That was my very last race freshman year in spring in May.”

It was his first big breakout race as he started the school year doing a seven-minute mile. “I think that was one of my biggest accomplishments at the time,” he said. “I remember I was trying to break five the whole year.

The summer between freshman and sophomore years was the first time Coleman started to put in proper training. The previous summer he was doing “like 10 miles a week,” noting, “I thought that was a lot back then. It wasn’t.”

After “cranking out” the miles, by the end of cross-country sophomore year Coleman was the No. 2 runner on the team behind then-senior Andrew Levy. Freshman year he wasn’t even in the starting seven.

“Cross-country I had a pretty good year and I never expected to be that high up on varsity and I was one place away from qualifying for the state meet,” he said. “Then in track I became the best 2-miler by the end of winter track. I broke 10 minutes in the 2-mile. That was huge for me.”

Junior year of cross-country Coleman was behind then-senior Daniel Asher, who qualified for states, and then as a whole, the indoor track team didn’t have a strong performance at the state qualifier.

“I feel like junior year was kind of average for me,” Coleman said. “In track in winter I did pretty well and PRed by like 10 seconds in the 2-mile, but 9:39, which was OK, but nothing huge.”

Weeks later COVID-19 shut down the schools for the rest of the school year in person. At that point Coleman felt like he had gotten himself back on track for spring, but during the shutdown he hurt his hip and was out until early June.

“I couldn’t run or really cross-train or go to the pool because gyms were closed,” he said. “It was hard to get back into it, but eventually in early June I started to heal and I went to a running camp over the summer and I had a great time there. I got back into it. I wasn’t where I was at the start of the pandemic, but I was getting good runs and I felt great.”

Though it was a shortened and modified season, Coleman was No. 1 for cross-country, with Friedman the steady No. 2, and placed second at the final meet of the season, the Westchester County Large School championship and likely would have qualified for states if there had been a qualifier meet. “I think I had a good season,” Coleman said. “The summer of COVID was tough, but I closed it out pretty well.”

With a delayed winter season and the Armory turned into a mass vaccination center, Clark scheduled four outdoor — yes, in the middle of the winter in January and February — dual meets with Fulton Automatic Timing, but the constant snow put an early end to that idea. And, following the fall 2 season the spring finally kicked off in late April.

Having not competed on a track since the winter of 2020 and with a solid training regimen, Coleman was ready for his final high school season. He actually got it started with the Scarsdale recreation 15K road race — he placed second — and had the confidence to chase his goals. He made small strides in the 2-mile/3,200-meter at first, but then made a major time drop at the league meet to a 9:19.96 in the 3,200, a personal record by 16 seconds.

“I never thought I would be able to do that,” Coleman said. “It was unreal. I did not think I had it in me. We switched up the training a little and did more intervals and I think that helped.”

With plenty more in the tank, Coleman started preparing to try to qualify for nationals as he needed to drop .97 down to a 9:19 in the 2-mile.

After hitting a 9:27.18 in winning the 3,200-meter at the Section 1 Class AA championships, Coleman hit the national cut time with a 9:15.57 in the 2-mile at the New York State Showcase, the final meet before nationals.

Coleman will run at the University of San Diego in the fall. “In the future hopefully I’ll continue to get even better,” he said. “In college I still have a lot of room to grow.”