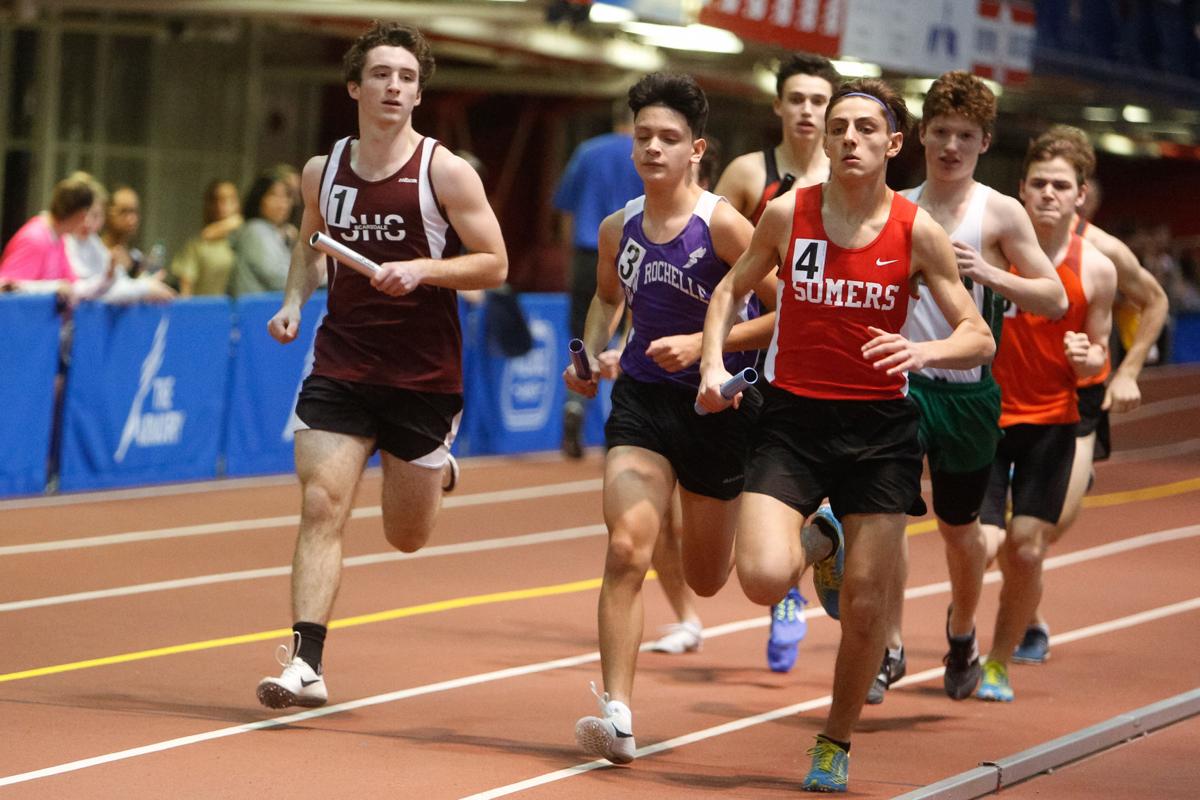 Jack Porter (left) ran the first leg of the Scarsdale 4x800 relay that finished first to win the Westchester County Championship at the Armory in New York City. 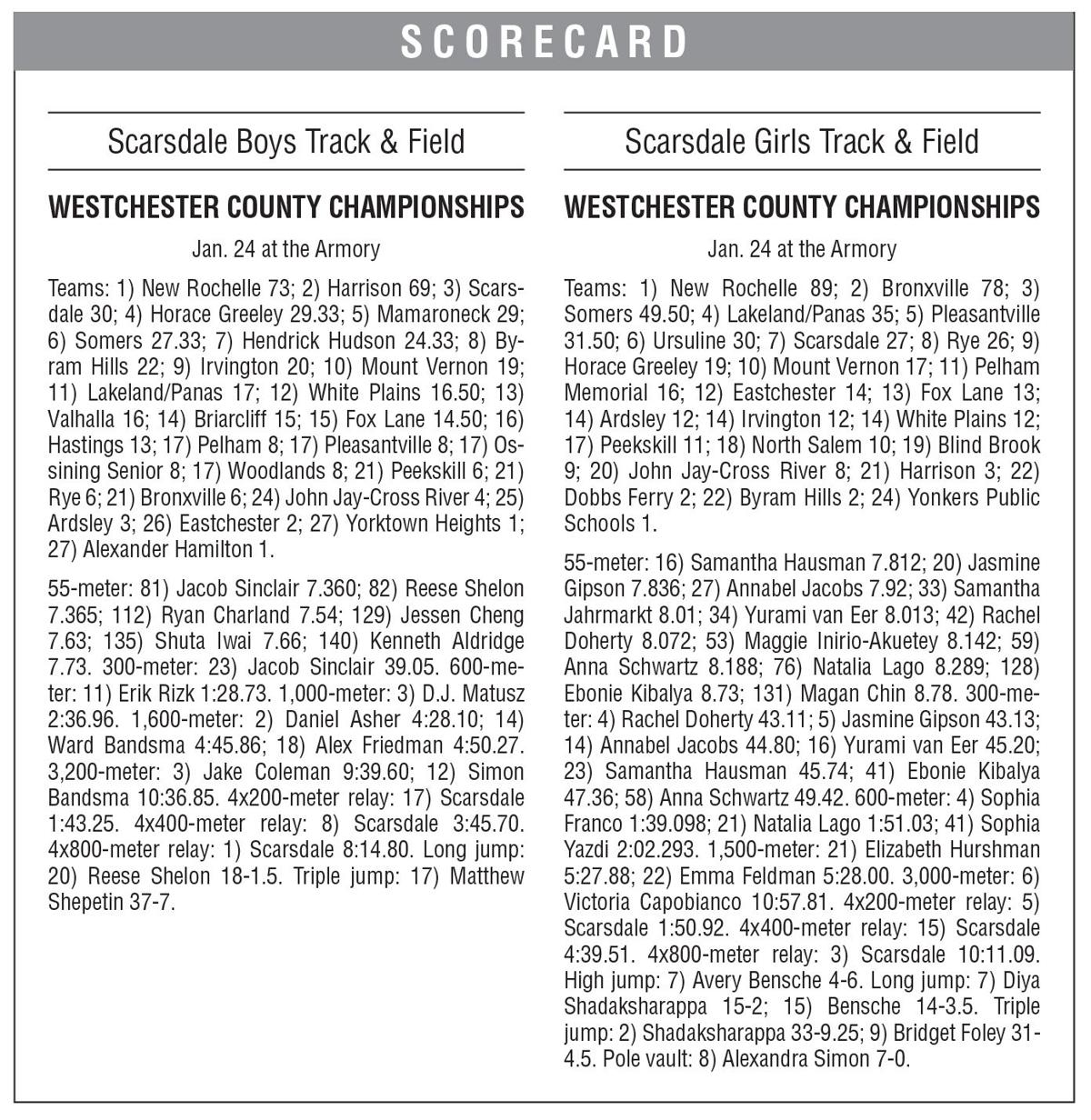 As further evidenced by standout performances at the Westchester County Championships, relays have become a strength for the Scarsdale track and field team.

“All the boys in the 4x8 ran really well,” Coach Rich Clark said. “Everyone did their job.”

The relay’s top time came courtesy of Daniel Asher, who delivered the squad’s lone sub-2-minute leg, despite a stellar performance in the 1,600-meter race, which he ran only an hour earlier. Asher was second in the 1,600 in 4:28, his second best time in that event.

As a whole, the relay team believes it can perform even better going forward. “I think there’s definitely a ton of room for improvement,” Matusz said. “We were either tired, sick or injured.”

Of the four legs on the team, lead Jack Porter was replacing junior Shan Daniel, who missed the meet due to illness. Second leg Jack McEvoy was running on a strained hamstring and both the third and fourth legs, Asher and Matusz, had run races earlier in the evening, with Matusz still having a third race to run soon after.

“I bet we could definitely get our time down about 15 or 16 seconds as of right now on fresh legs and with competition, of course,” Matusz said.

The team is optimistic about their trajectory for how they’ll perform for the rest of the season.

“The boys continue to be among the section’s top 4x8s,” coach Doug Rose said. “If we’re healthy and able to get the right team on the track, we should be one of the favorites to return to states.”

“The girls ran a great race,” Coach Clark said. “They did a great job.”

Added Rose, “[The relay] was a balanced team effort, no single dominating leg, although Alexandra Simon ran the fastest split.”

Despite being down a member, with star Sophia Franco running her individual event injured — and still managing to place fourth in the 600-meter in 1:39.01 — every runner on the squad brought everything they had to the race. Nearly all of them ran new personal bests for the event, or a hundredth of a second slower than their previous one.

“It really shows our character and our motivation,” Capobianco said. “It indicates how strong we are mentally.”

Capobianco, who also ran a personal best 10:57.81 in the 3,000-meter early in the meet, was surprised earlier in the week when coach Vinny Modafferi asked her to be a part of a relay team that was trying to break a school record. She is primarily a distance runner.

“My mouth just about flew open,” Capobianco said. “I was pretty honored and fortunate to be a part of that.”

To then break the record was even more astonishing for Capobianco. “I put my hand over my mouth and started to jump around,” she said. “I was really excited to be part of that team.”

The girls are also optimistic about how they’re going to perform for the rest of the season. “We’re looking forward to seeing how fast we can go if we move Sophia Franco into the relay,” Rose said.

The girls want to lower their time even more. “Knowing that we broke the record, we want to make it harder for the next people to come around and break it,” Capobianco said. “We want to keep breaking records … and show other schools we’re competitive.”

Scarsdale’s top performers didn’t just come in the form of relay teams. There were multiple individual performances that helped the team score in the county meet or qualify runners for future highly selective meets that will occur later in the season.

Junior Jake Coleman had a notable individual performance. His 9:39.60 finish in the 3,200-meter run, taking third place, was a strong enough time to land him a spot in the state qualifier meet.

“He lowered his time by five seconds, so that was pretty good,” Clark said. “He’s a little upset he didn’t get first, but the kid that beat him has a 4:19 mile to his credit, so I think Jake did a good job there.”

Other standout performances included excellent 300-meter dashes from Rachel Doherty (43.11) and Jasmine Gipson (43.13). They both scored for Scarsdale, placing fourth and fifth, respectively. There were also new personal bests from Annabel Jacobs (44.80) and Yurami van Eer (45.20) in the event, to help secure four top 16 spots for Scarsdale in a race that featured 67 runners.

The Raiders will now move on to the Section 1 Class A Championship meet at the Armory Wednesday, Feb. 5. The level of competition will continue to rise there as it did with the county meet, as this team believes it will do anything but crumble under the pressure.