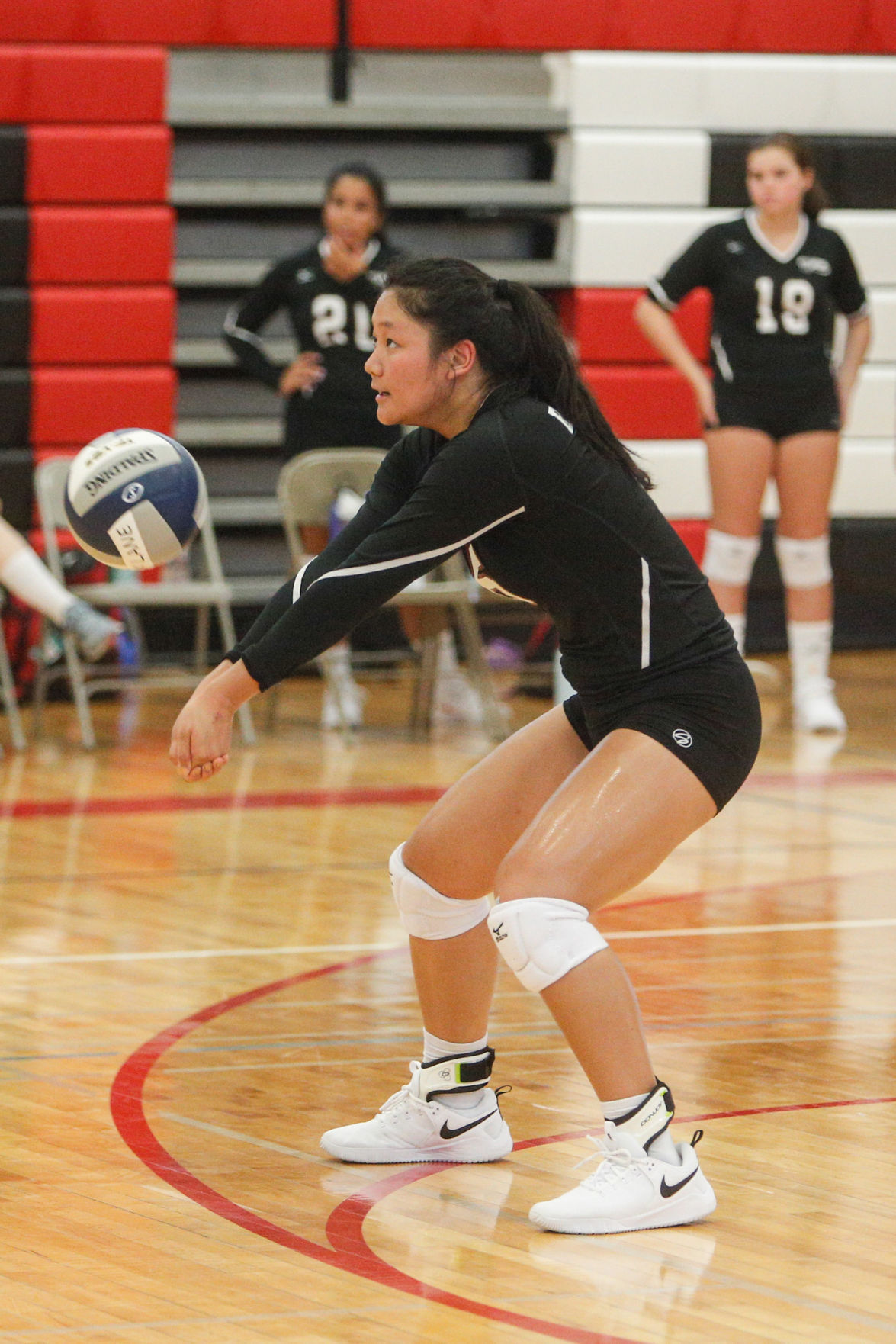 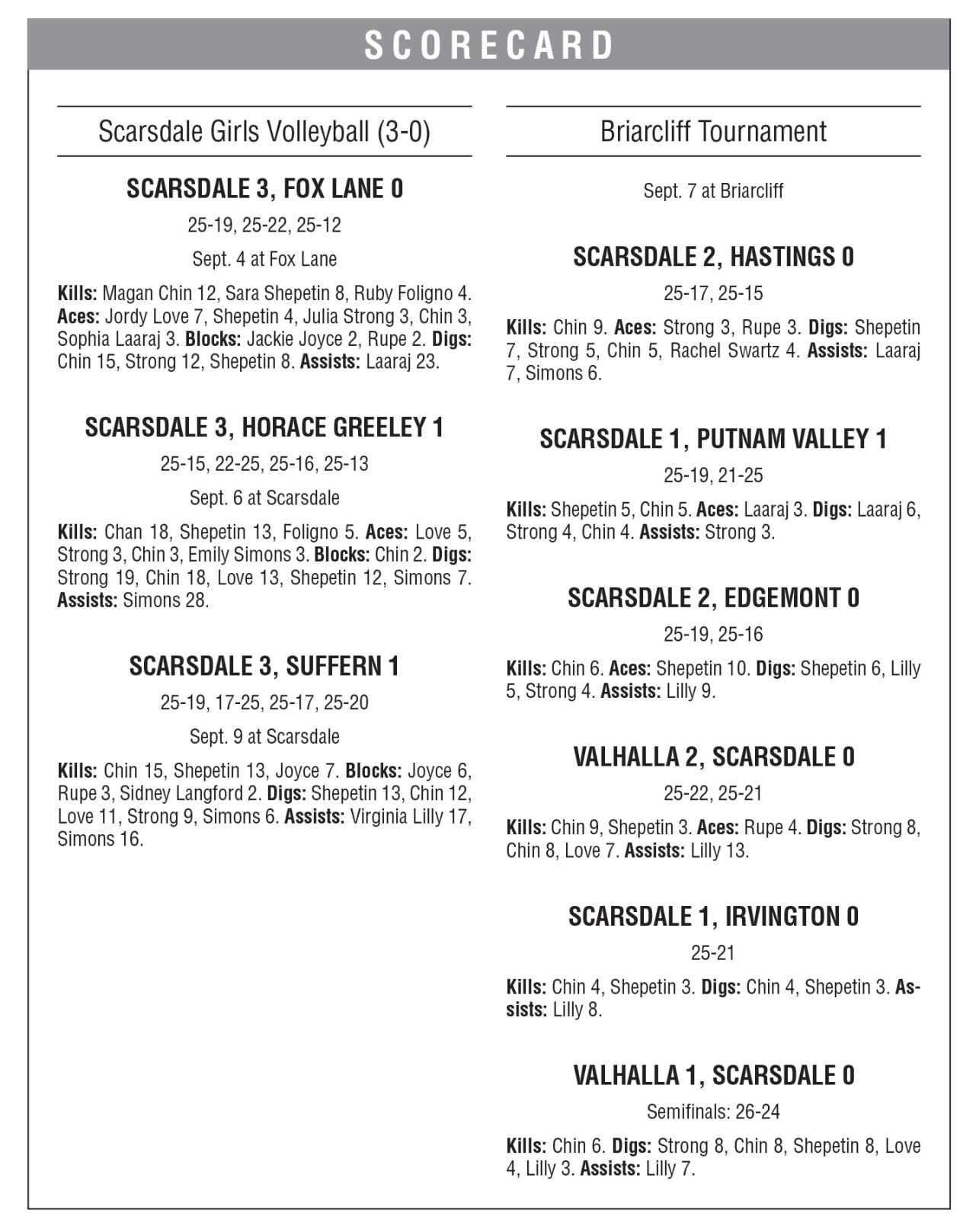 A 3-0 start and a near appearance in the Briarcliff Tournament finals for the Scarsdale girls volleyball team was sparked by returning outside hitter Magan Chin.

The senior had 84 kills, 76 digs, 64 receptions, 10 aces and five blocks over the first six days of the season and was named this week’s Con Ed Scholar-Athlete Award winner.

“She was amazing last year, she’s amazing this year,” coach Ann Marie Nee said. “She has a top-spin serve, which is pretty dangerous, but risky — dangerous for the other team receiving it, but risky because a lot can go wrong. She’s been working on it and it’s paying off and her hits have been amazing. If you put the ball in the vicinity of Magan Chin she’ll figure out how to kill it.”

Chin also plays elite club travel volleyball and has competed at nationals multiple times. Off the court, Chin is involved in student government, is president of the National Art Honor Society, is on the board of the school library, is a member of National Honor Society, plays violin, does Science Olympiad, writes for the school newspaper and is part of the Mandarin Club and Habitat for Humanity. “In volleyball, as well as in academics, and her other activities off the court, Magan Chin is a class act,” Nee said.

“We all gelled really quickly, which is a really pleasant surprise,” Chin said. “Last year it had taken us longer, but we have a really strong connection coming in, which is helping us.”

Scarsdale has 10 seniors this year, and a small group behind them with four juniors and a sophomore.

Nee is pleased with what she has seen thus far. “If you go position by position on this team we are two or three players deep,” Nee said. “There are a lot of options and they’re all good options. They’re really gelling as a team and they work as a unit. “

The transition was smooth in getting new starters in the mix.

“We all had to get used to how we play and how each of us works on the court, but practicing every day has helped a lot,” Chin said. “At this point we’ve all gotten to a place where we are comfortable with each other and can trust each other a lot.

“It would be great to make it to section finals this year and maybe got to states, but we take it one game at a time. Hopefully we end the season really strong.”

New libero Julia Strong has been making her mark early.

“She’s all over the court, a great communicator and she’s someone who is just the example of hard work,” Nee said. “The amount of hard work she put in and the fact that she played volleyball every day this summer, her volleyball IQ is through the roof.”

Defensive specialist Jordy Love brings spirit on and off the court whether she’s playing hard or organizing events. “She’s just the ultimate captain,” Nee said. “We have her playing DS and she got seven aces against Fox Lane. It was amazing. She takes what we work on in practice, which is tough serves, not just serving hard, but serving smart. She’s taken that on.”

Rachel Swartz is a back row backup who makes strong passes. Coco Dweck comes in to play front row for Swartz and has been hitting on point.

Sophia Laaraj is up from varsity B as a senior and played setter against Fox Lane. “The game plan was high to outside and that’s what Sophia did all day long and that’s how she connected with Magan and Sarah,” Nee said. “She did her job as a setter and she’s also an amazing server.”

Rupe is a middle who has been on her game so far. “She’s been hitting all her passes down, she’s been blocking, she’s been incredible as our front middle,” Nee said.

Ruby Foligno has been playing well on the right side after also being testing outside and middle during preseason. “She brings all-around talent,” Nee said.

Nee used a summer league in Pelham, a scrimmage tournament at Millbrook and preseason to get ready for the Section 1 schedule, which got off to a fast start.

The Raiders got to the airport to compete in a tournament in Florida, but they never left New York as Hurricane Dorian forced the team to cancel the trip. The team had to do its bonding and preparation for the season locally.

“I think our team is so bonded this year on and off the court,” Rupe said. “Off the court we’ve been hanging out every single second. We didn’t go to Florida, but we had team dinners and hung out. That really transfers to the court whether it’s the starting six or any other player. We all play well together and have great energy on the court.”

Familiarity is another plus for the Raiders.

“We’re good at knowing where everyone is so we don’t get in each other’s way and definitely covering blocks and tips,” Rupe said. “We’re really good at picking everything up.”