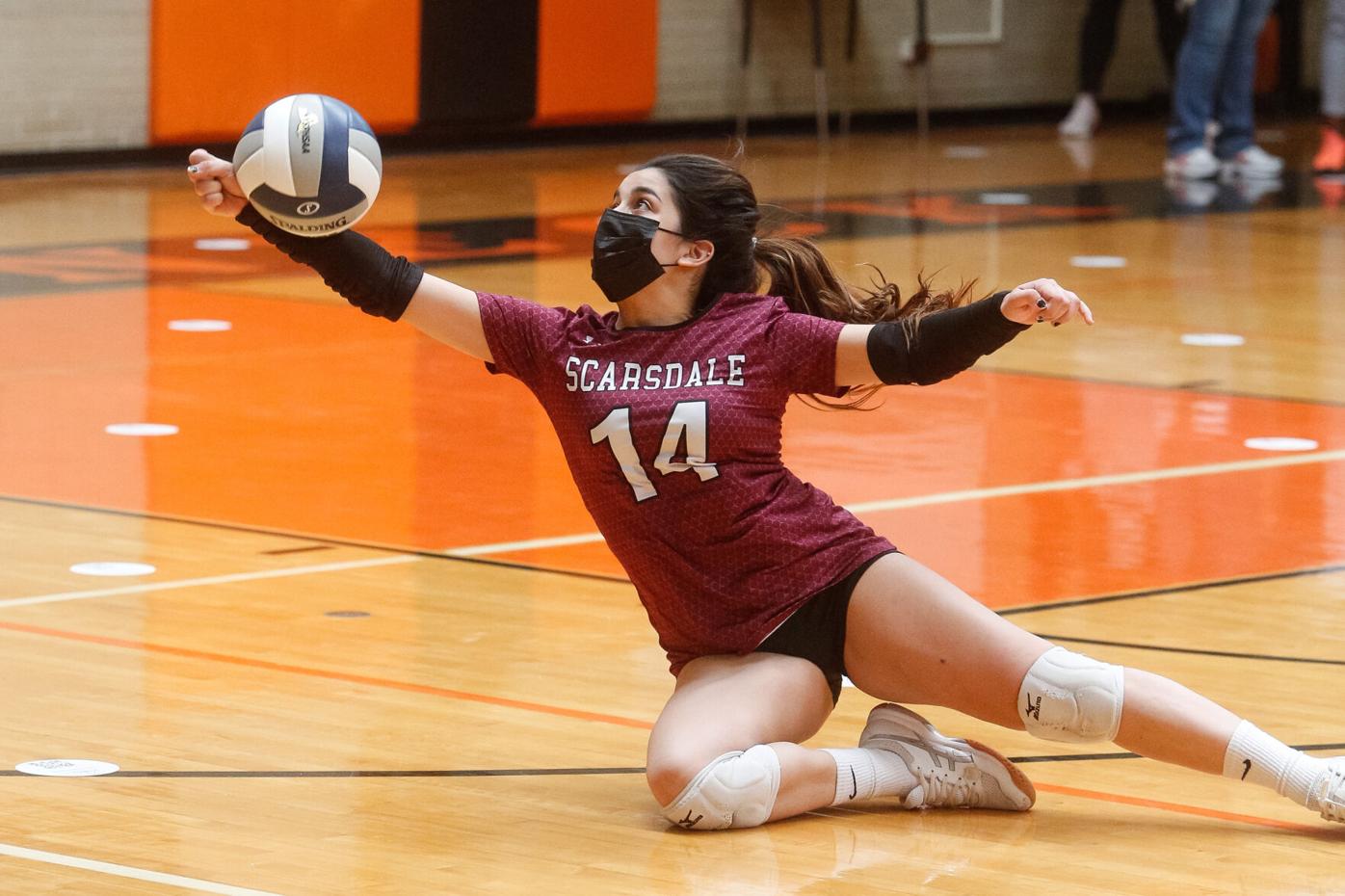 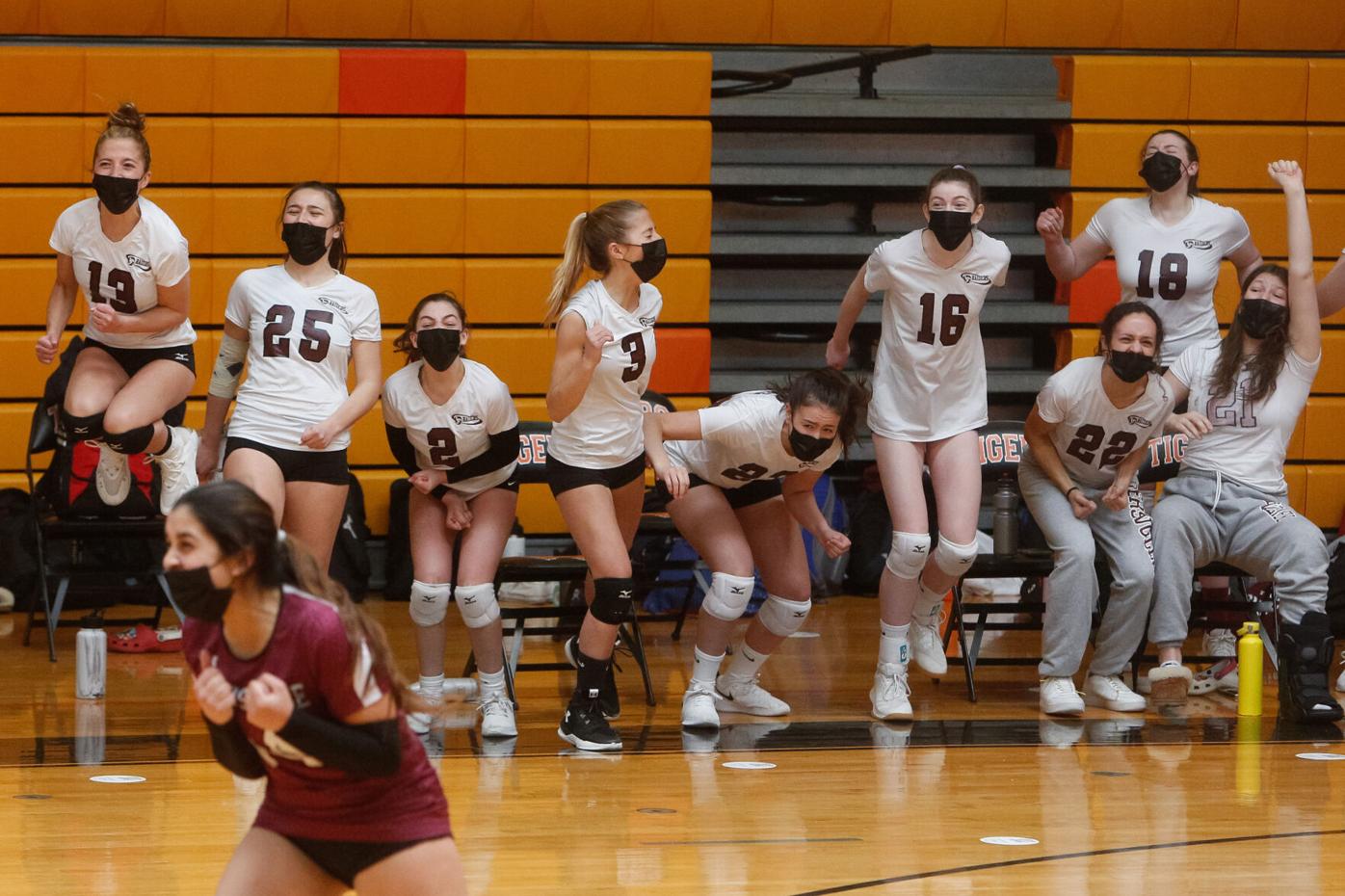 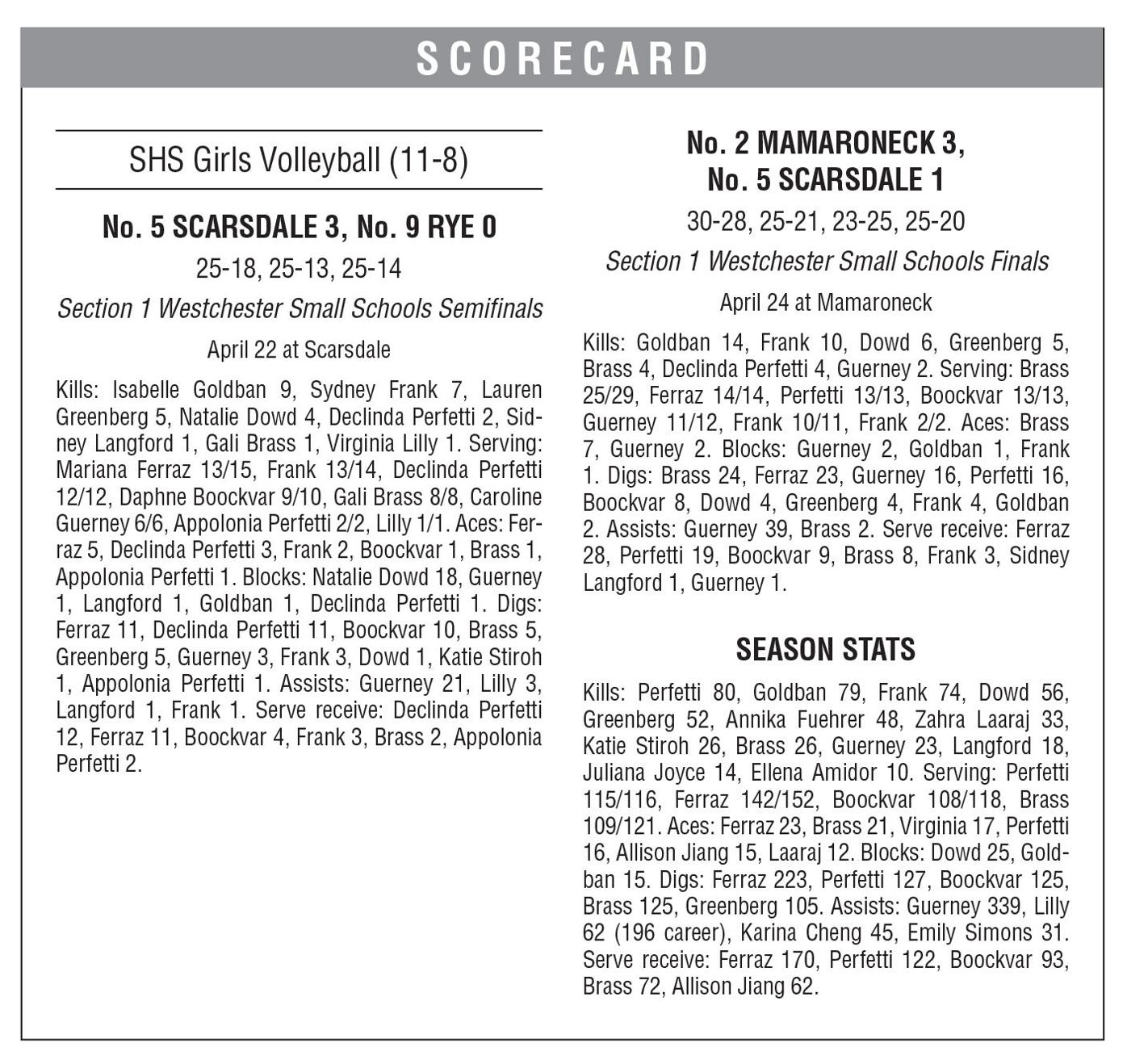 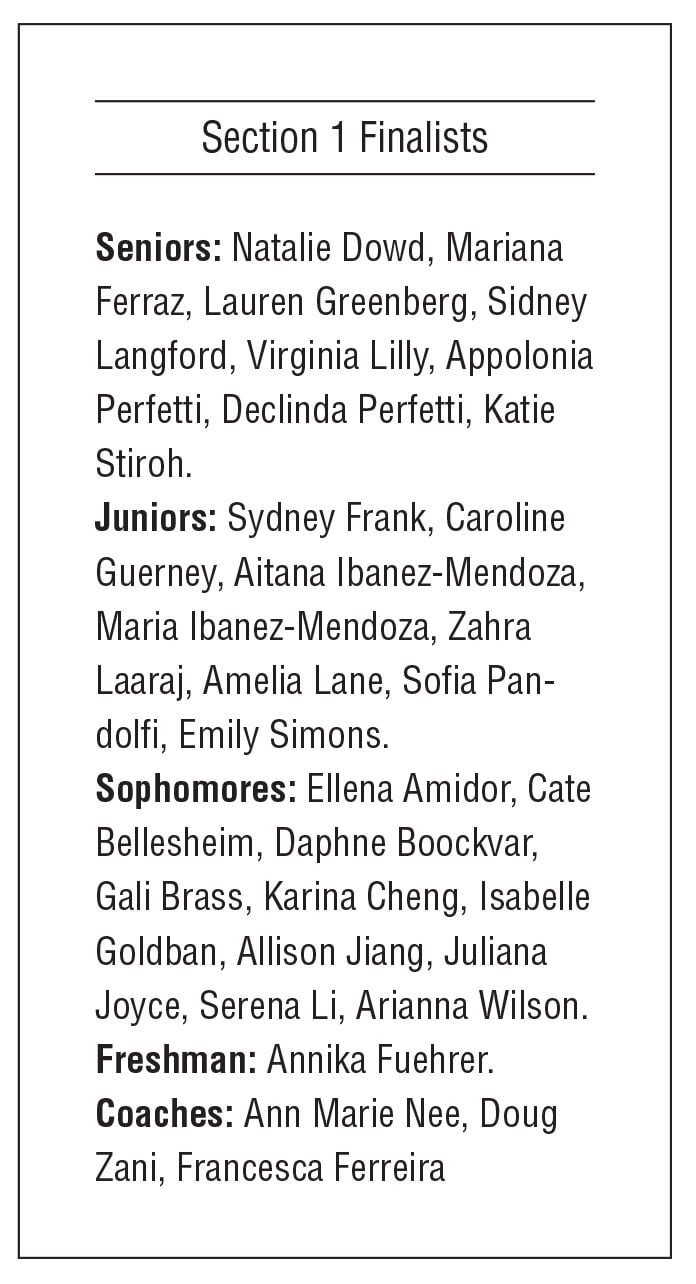 With the goals to play without any COVID-19 stoppages and to go as deep in the season as they could, the Scarsdale girls volleyball team certainly reached that destination. Though in the end they would have liked just one more set. And they came awful close to achieving that.

In the Section 1 Southern Westchester Large Schools Regional finals, the No. 5 Raiders nearly sent the match against No. 2 Mamaroneck to five sets, falling 3-1 after four extremely tight games that featured scores of 30-28, 25-21, 23-25, 25-20.

“I think it’s just an accomplishment just to be here and obviously COVID was going to be our biggest competition this season, so getting here is an accomplishment in and of itself,” sophomore Isabelle Goldban said. “I am proud of my entire team and I know we’re all proud of each other. We fought hard — obviously it didn’t go as we wanted it to — but we’re not going to let that diminish what we accomplished this season.”

Senior libero Mariana Ferraz was extremely emotional after the match, one in which both teams fought to the end of each point.

“I’m more sad that the season’s over,” she said. “I’m not sad because we lost. It’s because it’s my senior year. We played as long as we could and I never thought we would have a season, so the fact that we had a season was already a blessing. The fact that we had so many amazing players was another blessing. This was definitely my favorite season in my four years. It was the farthest we went, but also the best people, the best collaboration and that’s why I’m sad.”

Scarsdale went unconventional this season by not having a varsity B team and taking the four returning varsity players — they had graduated 10 and Jackie Joyce did not return for her senior season — seniors Virginia Lilly, Katie Stiroh and Sidney Langford and junior Emily Simons, and largely last year’s varsity B and junior varsity A players on varsity and splitting them into cohorts for most of the year, later combining them when it mattered most in the season. It’s hard to argue that it didn’t pay off as the team was 8-7 in the regular season and 3-1 in the playoffs, which didn’t include top teams like Ursuline and Pelham due to late season quarantines.

“We couldn’t go any longer and we didn’t have any COVID pauses or anything like that, so we really sucked every minute out of the season,” coach Ann Marie Nee said. “And we want to keep going. The girls are already asking about open gyms and practice next week. Our fall season is around the corner and we have so many returners.”

Mamo took full advantage, going up 8-1 and leading 15-4 before the Raiders, with sophomore Gali Brass at the service line, rattled off seven straight points with big plays by Goldban, who had three kills, junior setter Caroline Guerney, Dowd and Brass. The two teams traded points the rest of the way, and Mamo held on to win 25-21 for a 2-0 overall lead.

The Raiders took charge in the third set, going up 7-1, but Mamo stormed back to make it a one-point deficit at 9-8. Scarsdale won the next six points with Brass serving up three aces, for a 15-8 lead. After leading 21-17, the Raiders lost the next five points to trail for the first time — déjà vu of the first set — by a 22-21 score. The Raiders won the next three points and finally the 25th after a big diving save by Ferraz and a kill by Goldban.

Though the fourth set ended up close at 25-20 in Mamaroneck’s favor it didn’t quite tell the story. The Raiders went up 1-0 and then down 8-1 before Perfetti ended that streak. But Mamo kept pounding away and took a 21-8 lead. No surprise with Brass serving, however, that the Raiders made their way back into the match as Goldban added three more kills, Brass three more aces.

With the Raiders down 23-18, a Perfetti spike was ruled to have gone around the antenna, a big swing point that made it match point 24-18 instead of 23-19. The Raiders scored twice to make it 24-20, but Mamo ended the match on a tip over the net.

Nee made some adjustments in the fourth set with sophomore Daphne Boockvar going out due to injury — she had notably missed the first match of the season against Mamo — putting in Dowd in the front row and sophomore Ellena Amidor in the back. She also used lefty Langford to counter the middle hitter.

“The girls were ready to adjust and go in and they were so supportive of each other in the timeouts,” Nee said.

The Raiders have been resilient all season. After losing the first two sets to Eastchester by two points each, they were down 19-1 in the third set and bounced back to lose 25-16.

“Something so impressive with this team is we don’t give up no matter the score,” Goldban said. “We keep fighting to the end, so even if we’re down we don’t get down on each other and we fight until we have the end result.”

“We always showed that we really cared and that we worked together and that we wanted this,” Ferraz said. “We kept encouraging each other and day by day we got stronger and stronger to build a stronger connection.”

In the finals, Goldban led the team with 14 kills, while junior Sydney Frank quietly put up 10 kills. Scarsdale served well as a team and Brass and Ferraz combined for 47 digs, while Guerney and Perfetti tallied 32. Guerney had 39 assists and Ferraz had 28 serve receives.

“Caroline as a junior was making really good decisions with her sets and Mariana was running side to side getting a hand on the ball — everybody worked together really well,” Nee said. “We had a couple of flubs here and there, but Mamaroneck brought it today. This was the best I’ve seen them play.”

Young players like sophomores Boockvar, Brass and Goldban along with junior Guerney were in the middle of all the team’s rallies in the finals and will be the nucleus of next year’s team, along with Simons, who was hurt, and Frank.

“I am so proud of them and I know they are going to do great things,” Ferraz said. “Gali and Isabelle and Daph and Emily Simons and all the other underclassmen are great people, great players and I can tell they really care and they work hard. I want to see them keep going and come back and see them do great things.”

“I’m very proud of everything the girls were able to do this season,” Nee said. “They really came together when it mattered and put their best foot forward. Today is sad for the seniors, not just because we lost, but because they won’t wear this jersey ever again. It’s an emotional moment. Aside from losing, we’re losing our seniors.

“I’m so proud of the seniors, some of whom I’ve known since they were in seventh or eighth grade, so to see them grow into such amazing young women on and off the court has just been an inspiration to me.”

The returning players appreciate the eight seniors, too.

“We’re definitely going to miss all the seniors,” Goldban said. “They’ve made this season so special and it’s not going to be the same without them, but we have a great young team and I have high hopes for us for next season, the season after that and the future in general. I think we’ll do great things.”