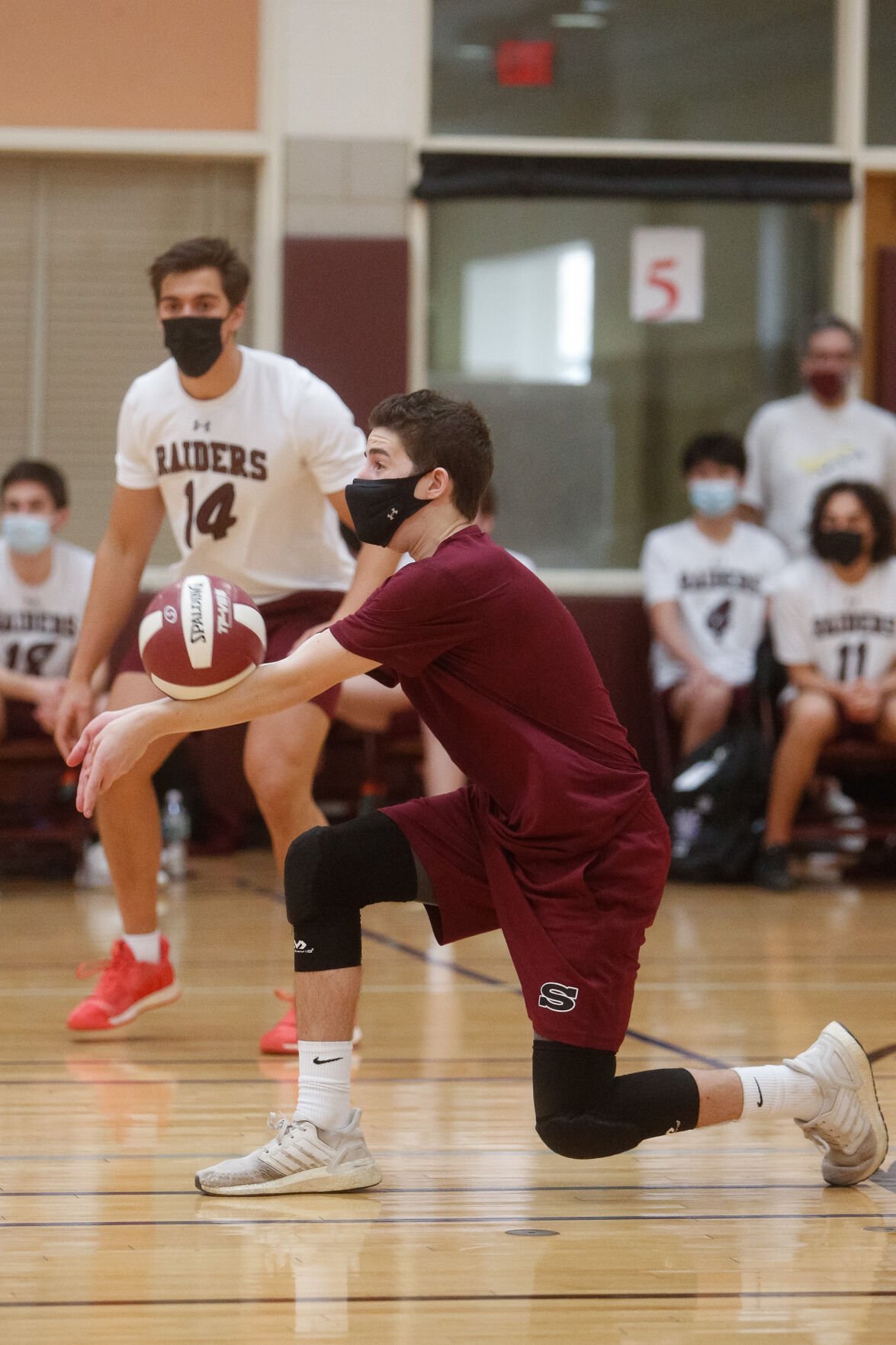 Ben Hoexter has been a rock in the back row for Scarsdale this season. 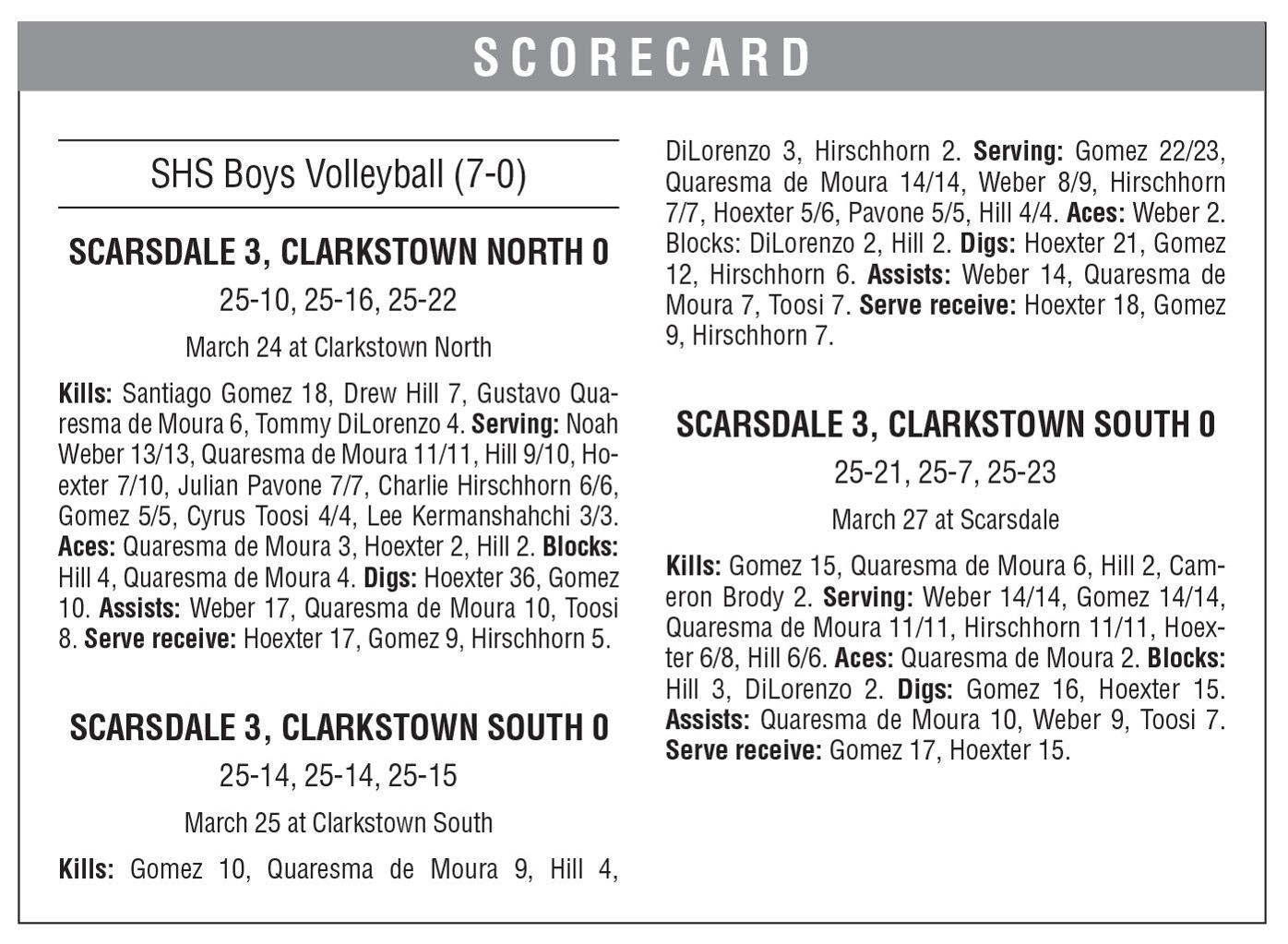 Heading into the vacation with a 7-0 record and rival Suffern up next on Tuesday, April 6, the Scarsdale boys volleyball team was firing on all cylinders and looking forward to what they hope will be a preview of the Section 1 finals later this month. Then COVID-19 struck.

“Monday I got a call from the athletic department saying that a student had tested positive and so the team went on quarantine,” coach Jim Williams said. “I followed up with the athletic director [Thursday] morning and it looks like no more new positive tests and we should be able to go back to play on Tuesday [April 7] of next week.”

The team will reschedule the first Suffern match and play Suffern, Eastchester and Suffern to end the regular season.

In regard to timing within the season it wasn’t terrible. The team last played Saturday, March 27, and had one practice scheduled for Thursday, April 1. Williams took that into consideration when making the schedule light for the vacation week.

“A little bit of conscious luck on my part,” he said. “I think we’ll dodge a bullet and still get our 10 games in and hope nothing else comes up and we’ll be OK for playoffs. The season is so short. If we had to quarantine during a week where we had four games there would really be no time to reschedule those games and we’d have a partial season out of a partial season.”

Scarsdale has not been challenged much this season by Eastchester, Clarkstown North, Clarkstown South and East Ramapo, so not only have the dominant starters had a chance to shine, but the subs, too.

“The guys who aren’t starting are definitely capable players and I think playing and practicing with the starters has really brought their level up,” Williams said. “You can see it with Oscar [Langford]. He’s a freshman and he’s almost ready to be a starter.”

Williams doesn’t regret his decision to put freshman Oscar Langford on varsity. He would have played all the time on JV, but benefits from more intense practices and a “high caliber” in games, too.

Langford’s older sisters, Mary, a 2019 grad, and senior Sidney, are also volleyball players, so he grew up watching them play. Last year he started practicing and scrimmaging with Downstate Volleyball and was thrilled to make the varsity team this year.

“I’d never played a set actually, and my first game ever was our first match that I played in,” Langford said. “I had been playing in Downstate practices and scrimmages, but never a full game. It’s been pretty awesome. I’m happy I get to play and not just sit on the bench.”

Langford is tall and a developing talent. When he goes up for a successful block or kill, his teammates stand and cheer, just like they do for other future stars like Charlie Hirschhorn and Tommy DiLorenzo, both sophomores.

“It’s the greatest feeling to get a full-on block that goes to the other side, done, point, easy,” Langford said, adding that his job is, “To get blocks and help out the team, to not get bad calls in the net, to be a team player.”

Junior Stephen Brockerhoff is another first-year varsity player and he made his way into the starting lineup for the first time in the team’s seventh match of the season just before the break.

“Stephen Brockerhoff has come along immensely,” Williams said. “He’s really coming along stronger and stronger. He started today in the first rotation in the first game. The whole team is playing together and all supporting each other and all cheering for each other. We have depth.”

After two years on JV, Brockerhoff appreciates the jump in level to varsity and has adapted quickly.

“When I was on the JV team a lot of things were improvised, but since varsity is a higher level it’s a lot more formulaic with more teamwork and cooperation,” Brockerhoff said. “I was a little nervous because it was my first time in the starting lineup for varsity, but I feel like I played all right. My coach said I proved myself in practice, so I’m proud of myself in a way. And I think I proved myself in the game, too.”

The middle hitter who focuses on defense likes Williams’ approach to getting everyone involved in matches.

“I feel like Coach has definitely been putting a lot of players in and it’s good for everyone because it gives everyone a taste of what it’s like playing against other teams because playing in a real game is different than playing in practice,” Brockerhoff said. “Getting that experience is beneficial for everyone.”

The junior varsity team under coach Greg Leong also has a host of future stars in the sophomore class that will be able to contribute next year. “We should be good for a few years,” Williams said.

For now the team is focused on being healthy and preparing for Suffern when they return to school and practice.

“We need to make sure we don’t hit it out and give them easy points, just clean up our game,” Langford said. “We have to avoid getting dumb calls against us. We’re excited for the matches.”

Brockerhoff said that even though the team focuses on whomever they are going to play next, Suffern is always in the back of their minds when they are practicing.

“Coach told us several times in practice that, ‘Suffern will make us eat it,’ if we make certain mistakes in a game when we’re practicing, so we’ve known they are a foreboding entity we’d have to face eventually,” Brockerhoff said. “We feel pretty confidence given our win streak and we just want to prove ourselves during Suffern.”

While Santiago Gomez’s hitting, Gustavo Quaresma de Moura’s all-around play and setting and Noah Weber’s setting will be key, so will another of the team’s new weapons, senior libero Ben Hoexter, who looks forward to facing the other top hitting team in the section.

“Ben Hoexter I would never have expected he would be playing as well as he is at this point,” Williams said. “He’s anchoring that back row, playing libero, and making sure the ball stays in play. He’s taking those hard shots and making sure he steps in, he’s anxious to take those hard shots. There is a Suffern kid who hits the ball hard and Ben is looking forward to that challenge.”

Like many of his teammates, Hoexter got the volleyball bug in middle school physical education class and knowing there was a program starting at the high school — this is Year 5 — he decided to focus on the sport.

Hoexter credits Leong for helping get started on a positive path within the program. “One thing I really appreciated about JV is, despite my size, Leong tried to play me all around and tried me out as a back row player,” Hoexter said. “I got experience everywhere and it was really fun. Not until varsity did I really become more of a libero/back row player, but I’m thankful for my experience all over the court.”

In 2019, David Peng was the varsity libero on the Section 1 finalist team, but Hoexter got to practice and play enough to give him an edge this year as a senior.

“I definitely got to develop under the seniors,” he said. “I think it was really important for my maturity as a volleyball player.”

Hoexter is proud of his contribution to the team.

“As a player I’m tough on myself if I make a mistake,” Hoexter said. “I just focus on improving and I talk to Coach to make sure a mistake doesn’t happen again. It’s wild because I still think of myself as a new kid in the program who is just trying to learn volleyball and have fun with his friends. It’s fun to see how full circle this has come being a senior captain and we’re undefeated.”

Though Scarsdale won the first game in the finals last year, they lost the next three and went home with a bit of a chip on their shoulder knowing they were good enough to win.

“They sent us home last year,” Hoexter said. “We remember that. We didn’t sit back and start feeling bad for ourselves. Coming into the season we were ready. We’ve beaten every team we’ve seen, so we’re ready for Suffern. We’re more focused on improving and having fun as a team, but we want to beat Suffern. End of story. We’re ready to send them home this year and win the section.”