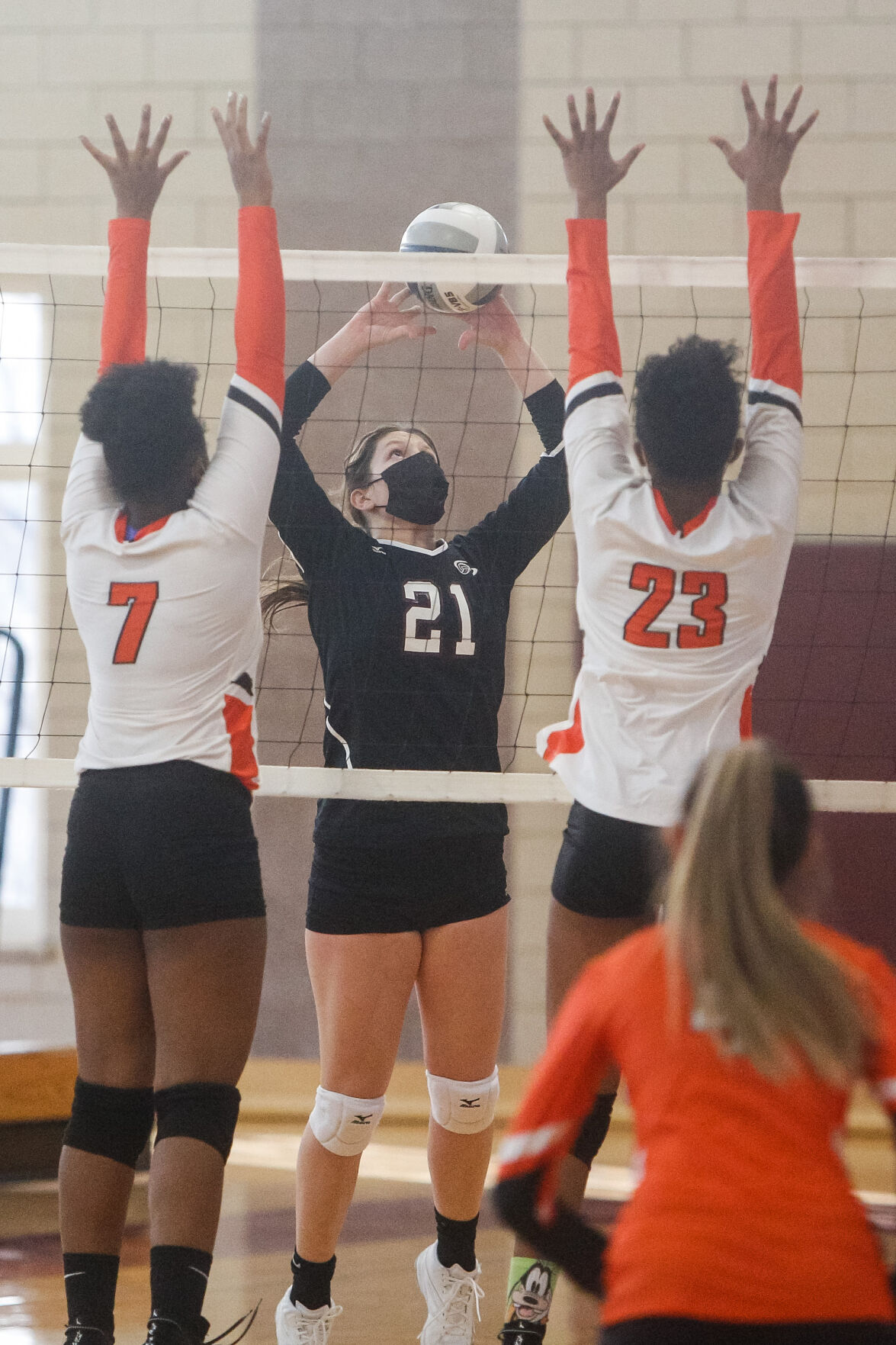 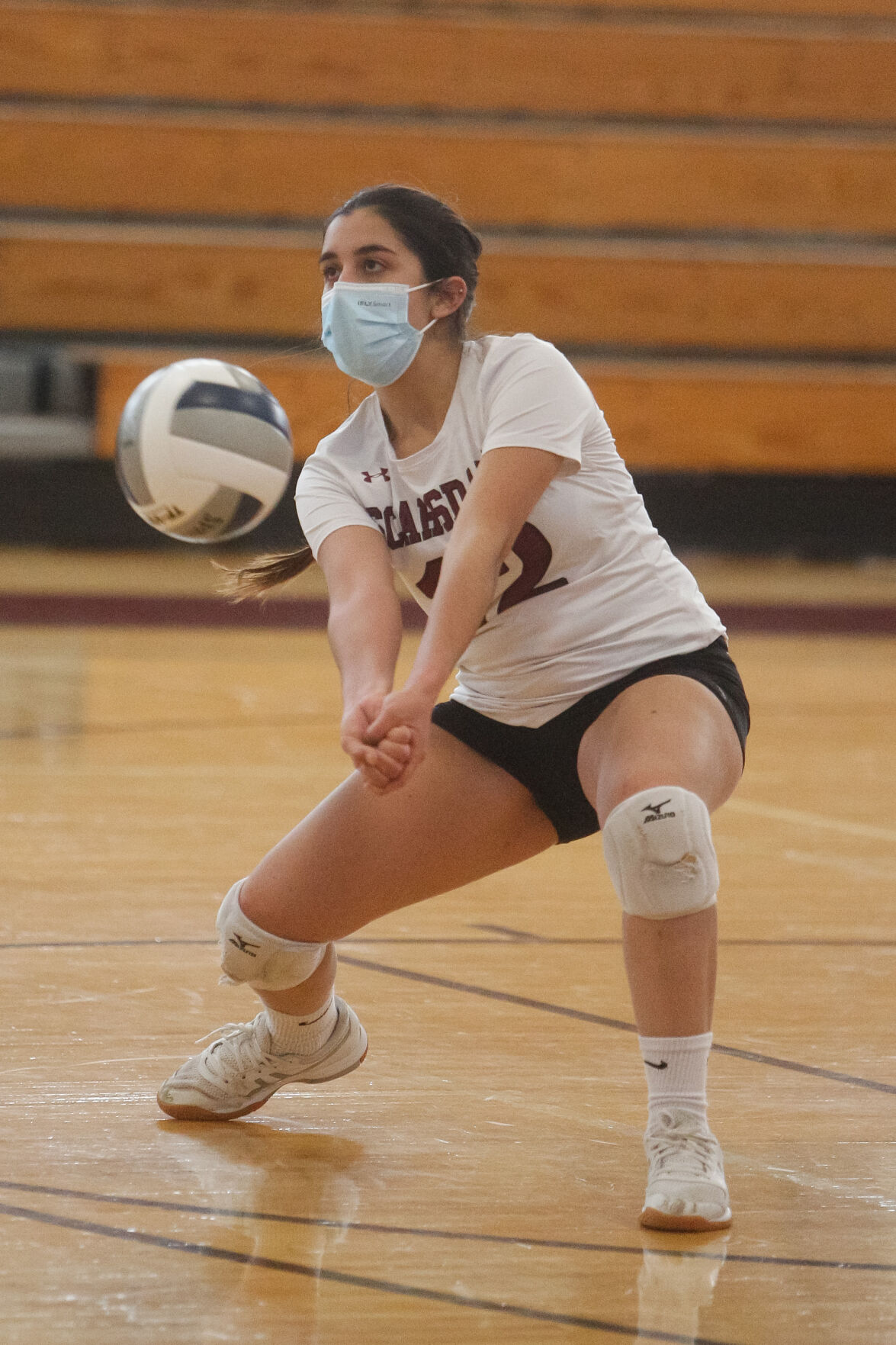 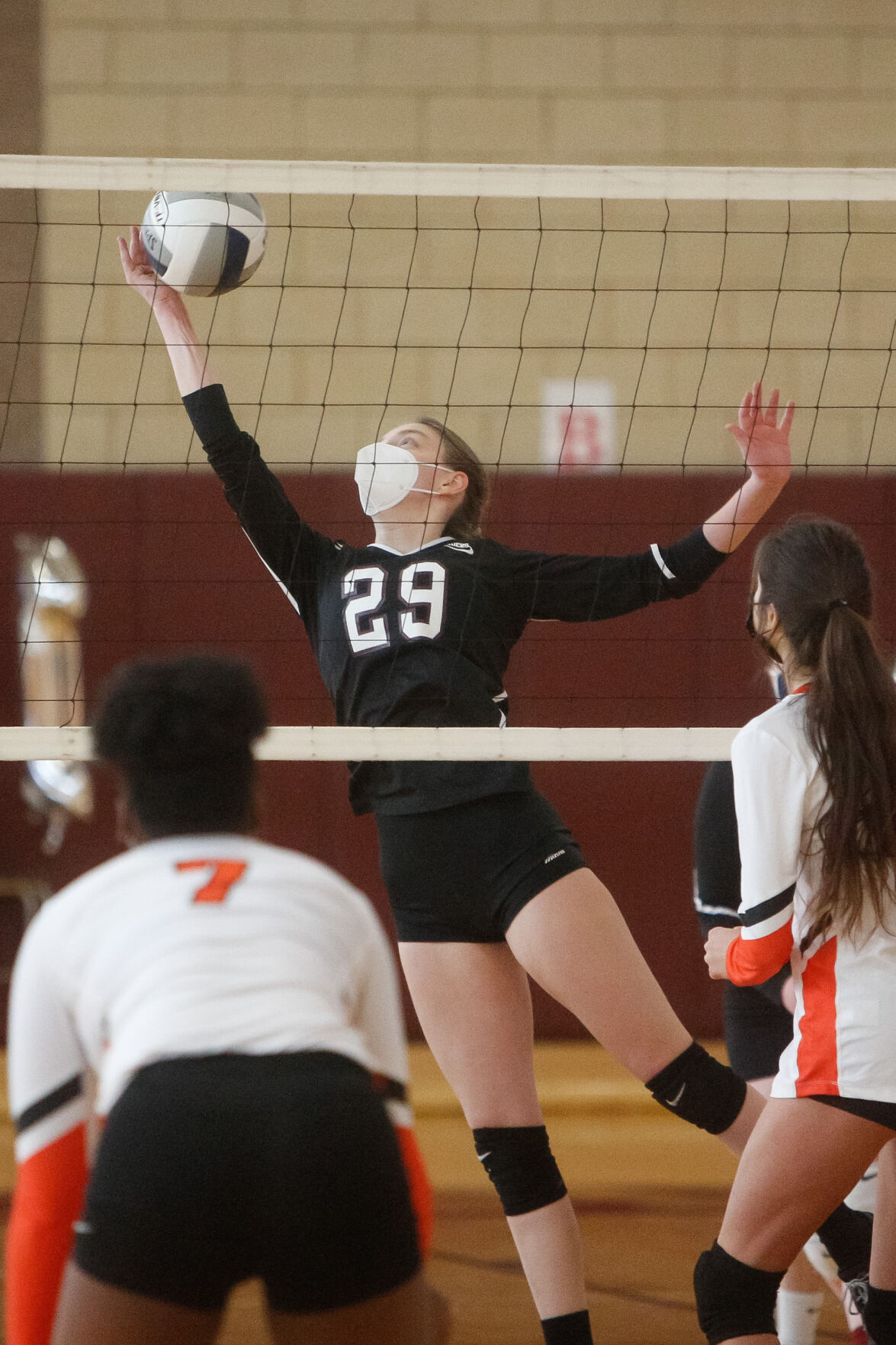 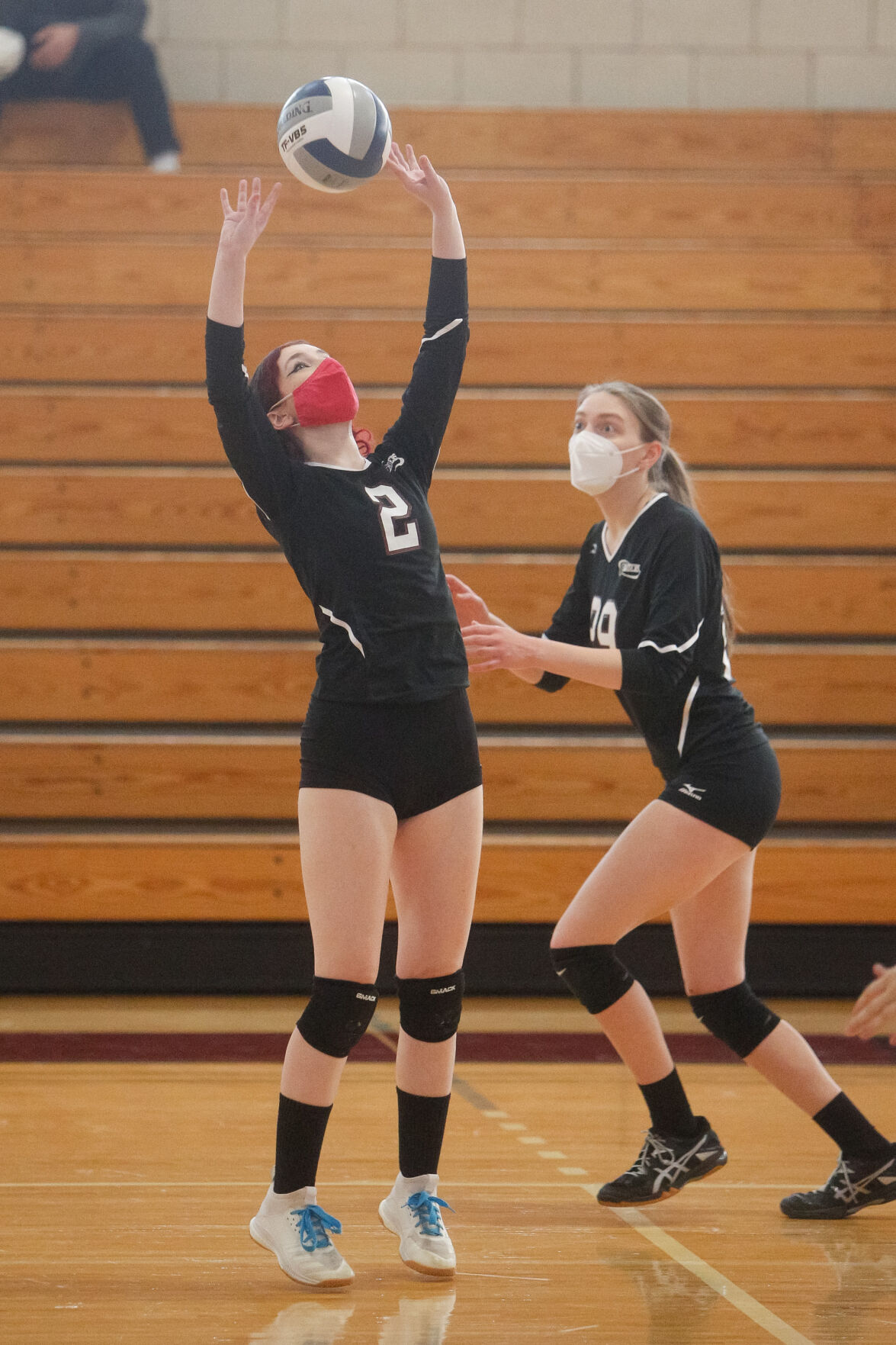 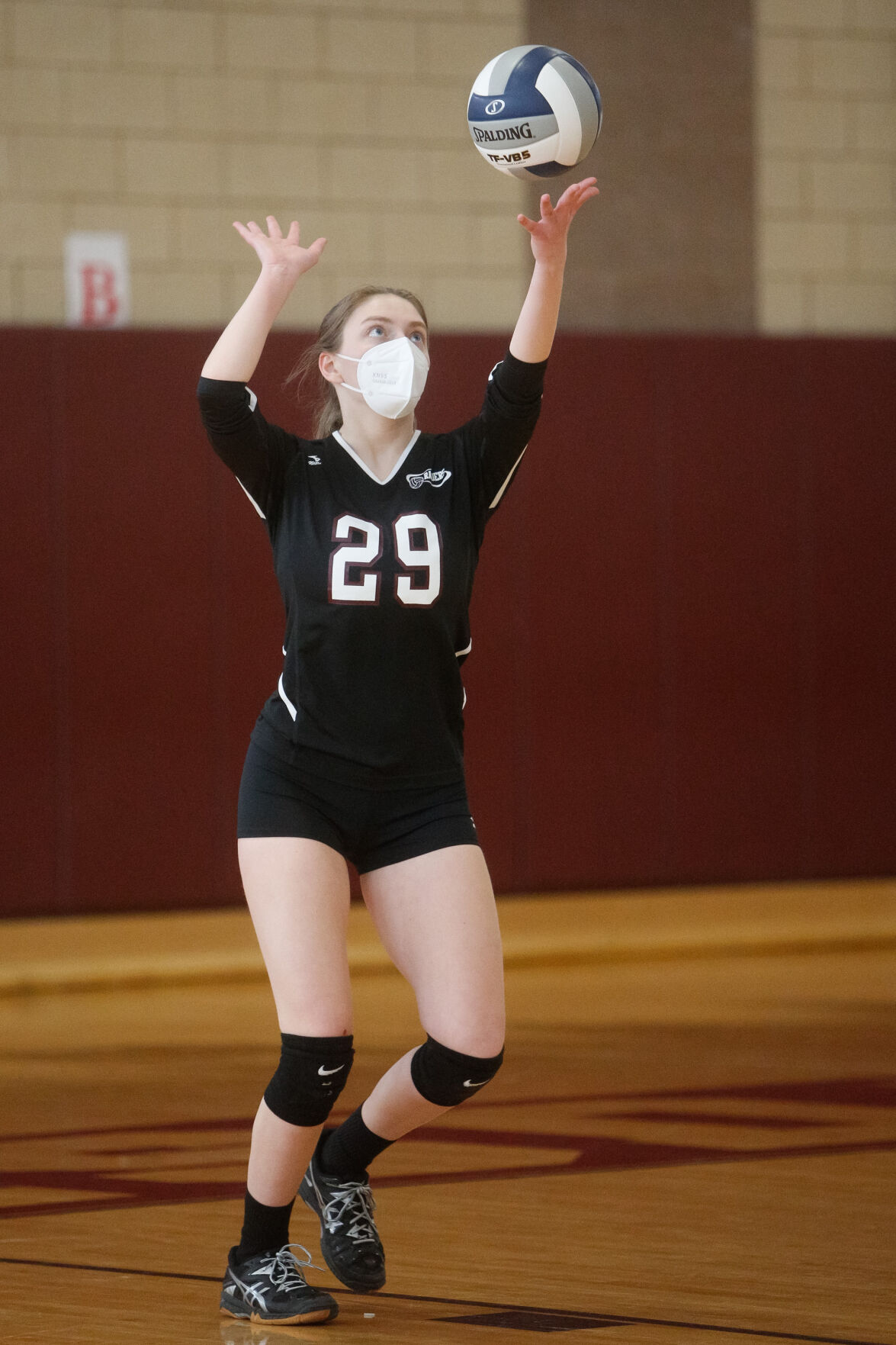 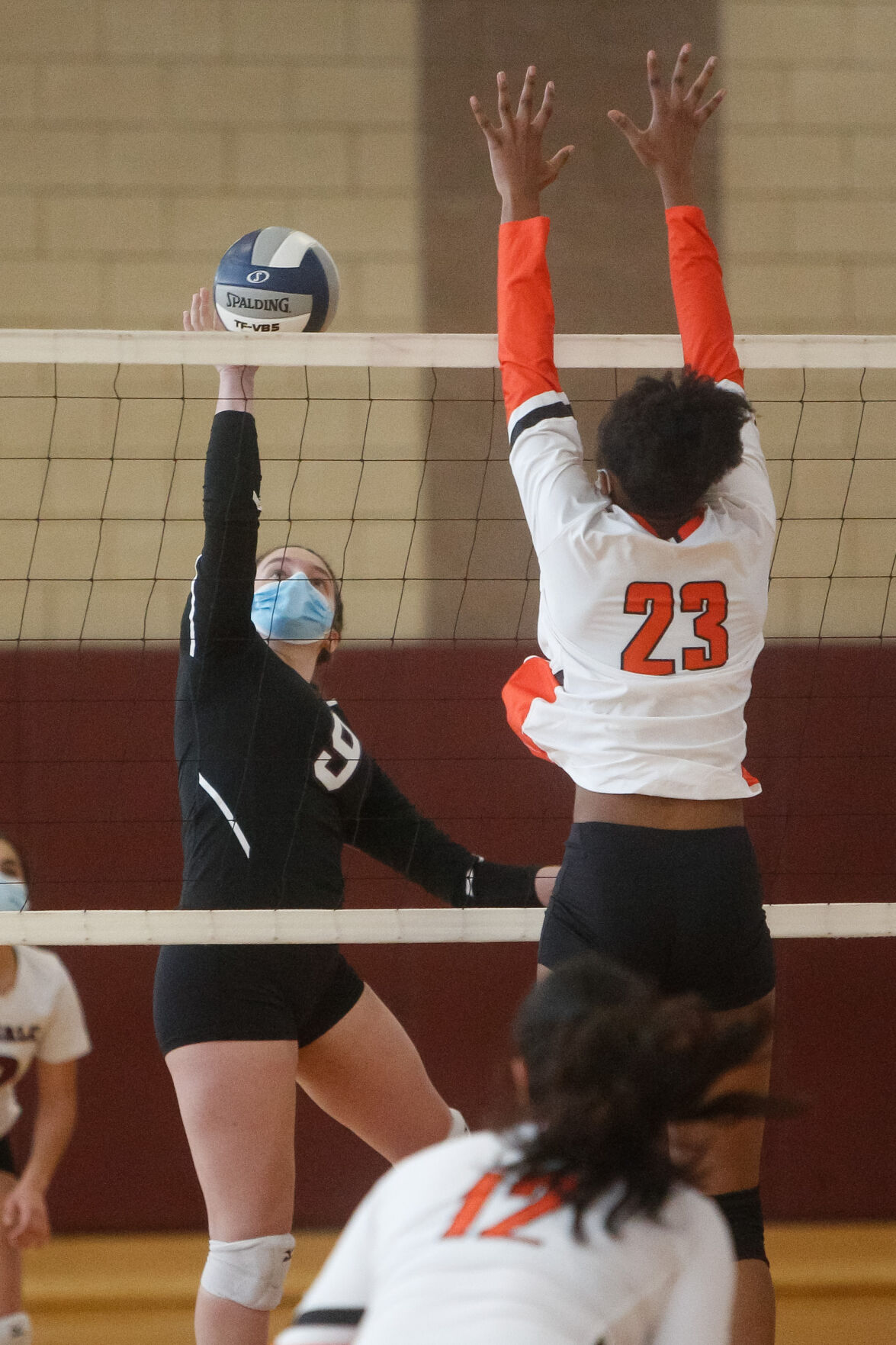 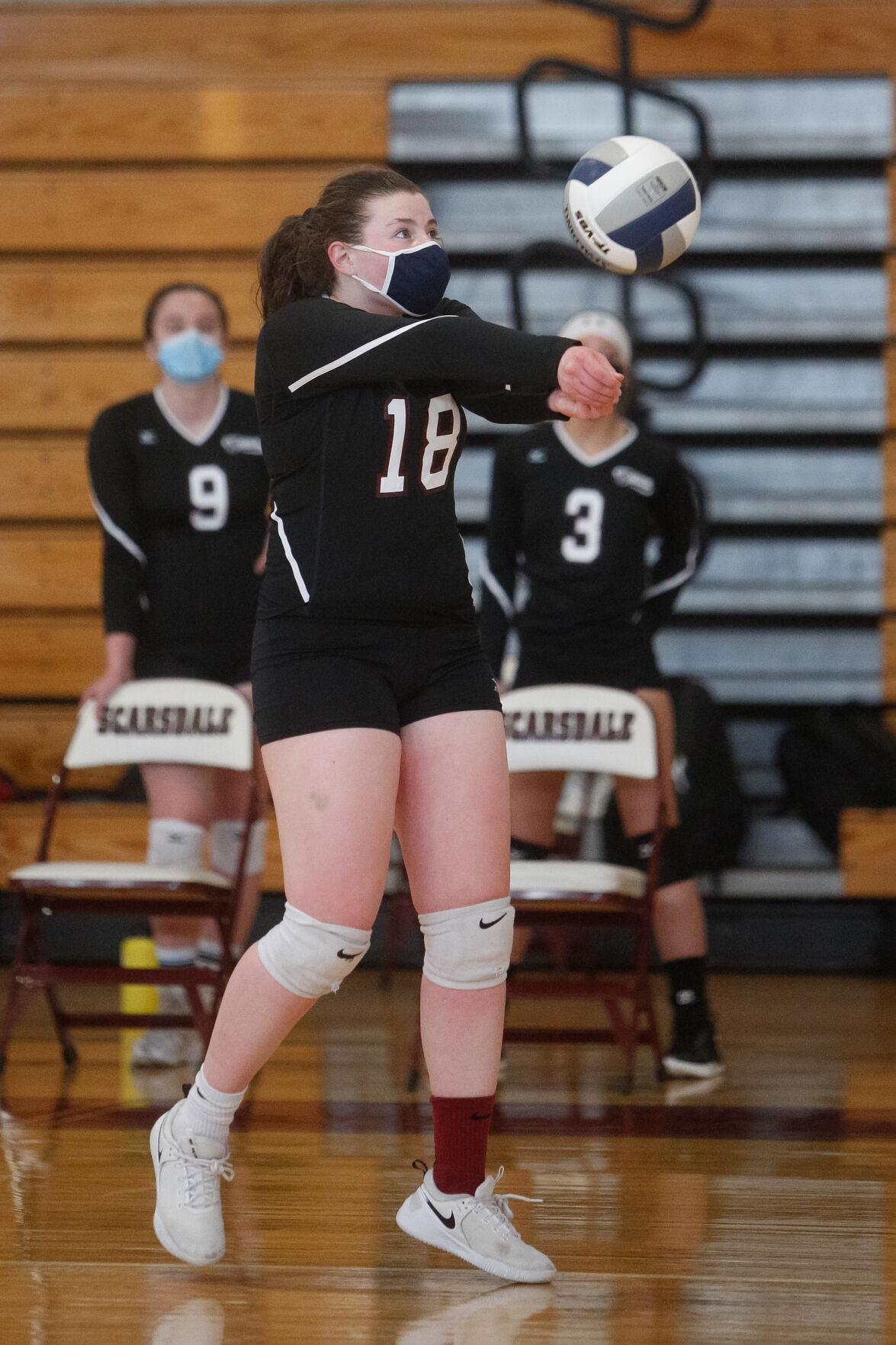 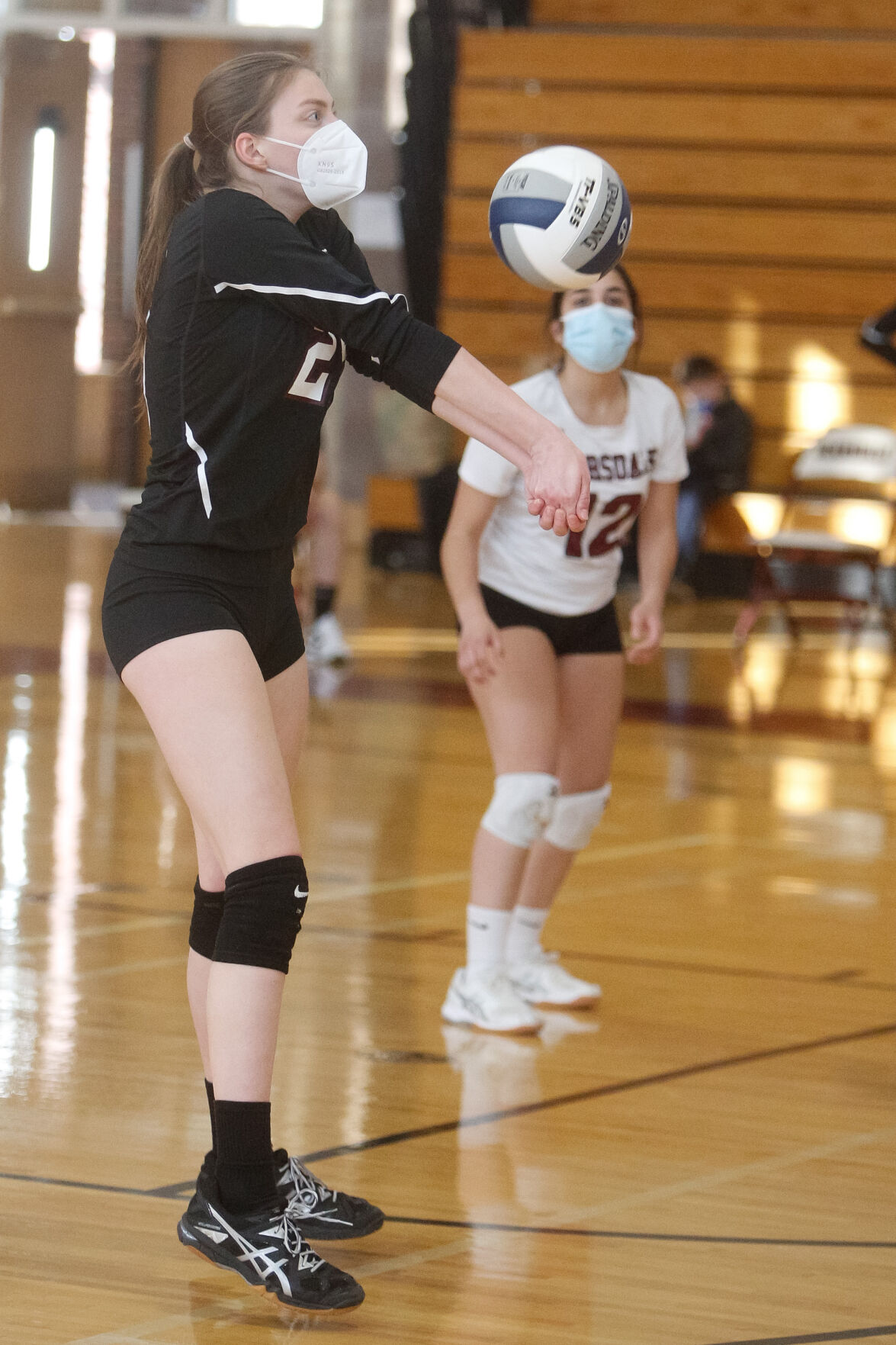 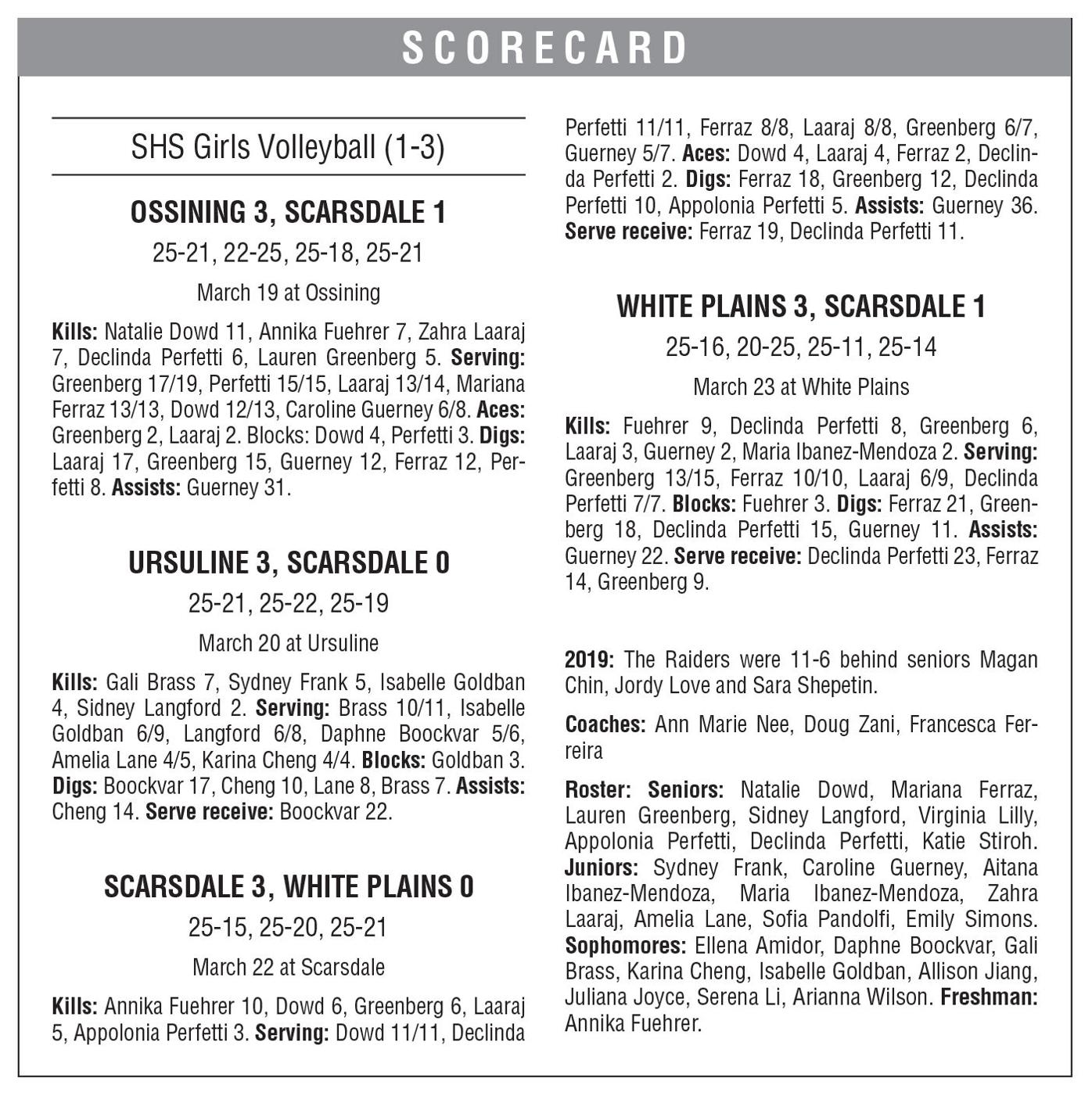 Learning from high-risk winter sports, the Scarsdale volleyball program went in a unique direction for the high-risk fall 2 season. The Raiders, hoping to avoid season-halting quarantines, combined the 26 potential varsity and varsity B players to make one large roster, then split the roster into two nearly equal competing cohorts. Matches played by either cohort, which can have some crossover if a certain specialty position is needed, count toward the varsity team’s overall record.

Coach Ann Marie Nee was looking at the present and the future when formulating the plan for the season.

“Especially with COVID, sports are so important for kids. To feel part of a team, connected to the school and to feel like they had a reason to come back to school, for some kids this is the reason they get up in the morning. I wanted as many kids to experience that especially this season.”

Some of the team’s 15 matches have been preassigned to each cohort, while some have been based on competition. The two groups played for the right to play defending Section 1 champ Ossining, while the other team practiced and faced a tough Ursuline squad the next day. The cohort with five seniors played both matches against White Plains on back-to-back days this week, while the other cohort was faced with Edgemont and Ardsley on back-to-back days.

The coaches run practices for the cohort that doesn’t play that day in the evening, willing to put in the extra time to make sure all 26 girls are getting the experience they deserve.

“Our season is so short, so we thought this would be a good chance for us to stay in it if an individual or a small group of individuals had to be quarantined or a whole cohort had to quarantine,” Nee said. “We’re trying to learn from the experiences of some of the winter teams like basketball and ice hockey, in particular, where they lost 10 days of their season.”

Each group has more experience playing together, so the coaches wanted to keep the on and off court bonds intact as much as possible.

“We wanted to honor the seniors, first and foremost, and make sure they’re on teams where they get some playing time and also provide leadership for the younger players,” Nee said. “We have a lot of sophomores. With five seniors in one group and three in the other they’re all doing a great job exercising leadership skills and passing on traditions.”

“Maroon, we have a really good connection and I jut love everyone on my team,” Declinda Perfetti said. “It’s really good because my senior year I get to play with my friends.”

Perfetti likes both the large team and the cohort concepts. It has a family feel to it and keeps the ball rolling at all times. “Overall I think it was a really great idea,” she said. “Especially with the pandemic, if we have to sit out a game because someone in the other team has the virus the other team gets to play and we don’t lose the season.”

What Dowd truly missed were the two weeks of summer workouts that fall teams typically have in August prior to the start of school. That time together is something winter and spring teams don’t get, including double sessions and lunches and dinners when the kids have no other responsibilities.

“It’s really condensed, so the important part is the people we’re playing with,” Dowd said. “Obviously we’re competitive and we want to win, and we saw that today as we won in three sets [against White Plains], but the relationships we have with other players — I’ve been playing with these girls for years — is really important to me. I’m glad we have the opportunity to play together again because we weren’t sure if we were going to have a season at all.”

After winning 3-0, the Maroon cohort ended up splitting with White Plains, falling in the rematch 3-1, but the team continues to work on communicating and making good choices as to where to place the ball.

Coach Nee picked out some highlights from each match for the 1-3 Raiders. Ossining was a major challenge to open up the season as the defending champs are always a powerhouse. The Raiders held their own over four games, 25-16, 20-25, 25-11, 25-14.

“The game was a nail-biter from start to finish, with each set a back-and-forth matchup that could have gone either way,” Nee said.

Scarsdale was led by junior setter Caroline Gurney, who had 31 assists and 12 digs, and Dowd, who had 11 kills as the middle hitter, while also finding outside hitters Greenberg and junior Zahra Laaraj, and back-setting to Declinda Perfetti on the right side.

Libero Ferraz led the defense with 17 serve receives and 12 digs. Between veteran Dowd and newcomer freshman Annika Fuehrer, the middle was plugged up defensively.

All three sets against league rival Ursuline were close, with Ursuline sweeping 25-21, 25-22, 25-19. Nee credited “unfortunate” unforced errors for the setback, but she expects the team to learn from the mistakes and improve.

Returning junior setter Emily Simons is still recovering from an elbow injury, so sophomore Karina Cheng stepped up to set, served and played “stellar” defense. Gali Brass, another sophomore, played front and back row outside hitter and put up 17 kills. Fellow sophomore Daphne Boockvar had 17 digs as the libero.

“These players, who all played on disparate teams last year, continue to gel on the court during practice and have been working on specific improvements to team play every practice: positional play in relation to each other, hitting strategy, and serving with strategy, not just serving hard,” Nee said.

The seniors led the way in the win, the first home game of the season.

“White Plains has a young team with solid hitters, but Declinda Perfetti, Natalie Dowd and Annika Fuehrer were able to put up formidable blocks to force them to tip, allowing us to set up our offense,” Nee said.

Fuehrer led with 10 kills, while Declinda Perfetti had eight and Ferraz stepped up on defense.

“She communicates clearly, has tremendous spirit, and is completely determined to get to every ball,” Nee said. “She led with 18 digs and has been really working on refining her court position in anticipation of the hit.”

The next day the Raiders made more unforced errors — missed serves and hits out of bounds — and got “outgunned” by the White Plains hitters.

“While we were successful on defense in getting the ball over, White Plains set up stronger attacks that allowed them to dominate,” Nee said. “We are hoping to regroup over the next few days to restore confidence and hit with more conviction on offense.”