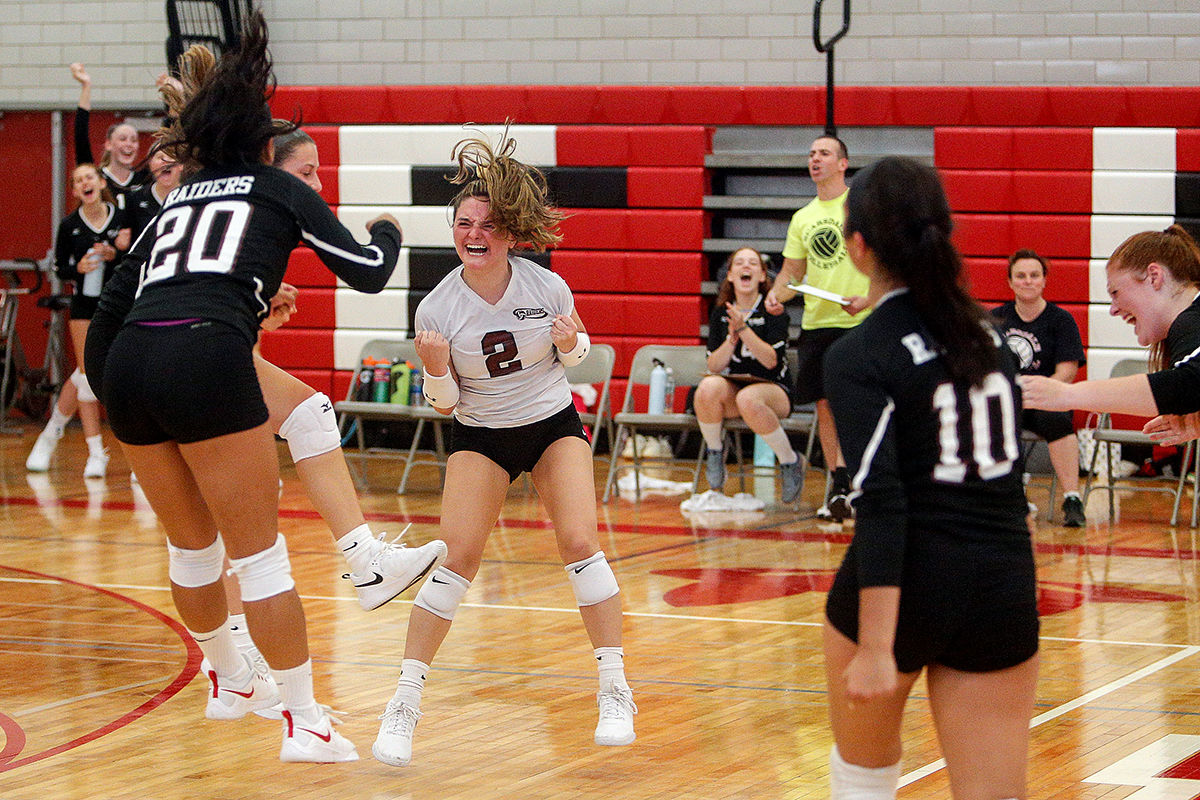 Julia Strong, No. 2, has a knack for getting her teammates pumped up. She has thrived as the starting libero this year as a senior. 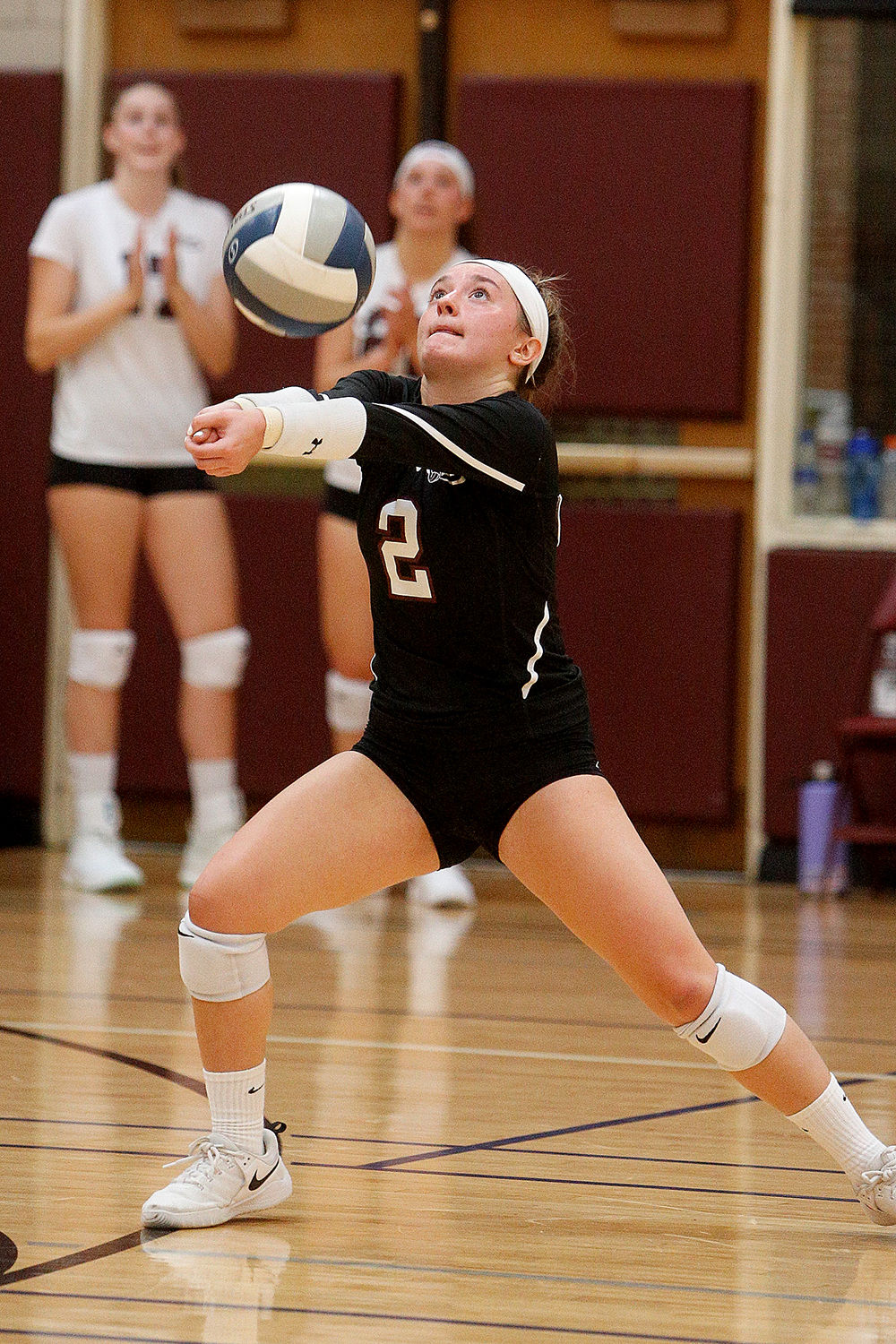 Julia Strong is a force for the Scarsdale volleyball team on and off the court. 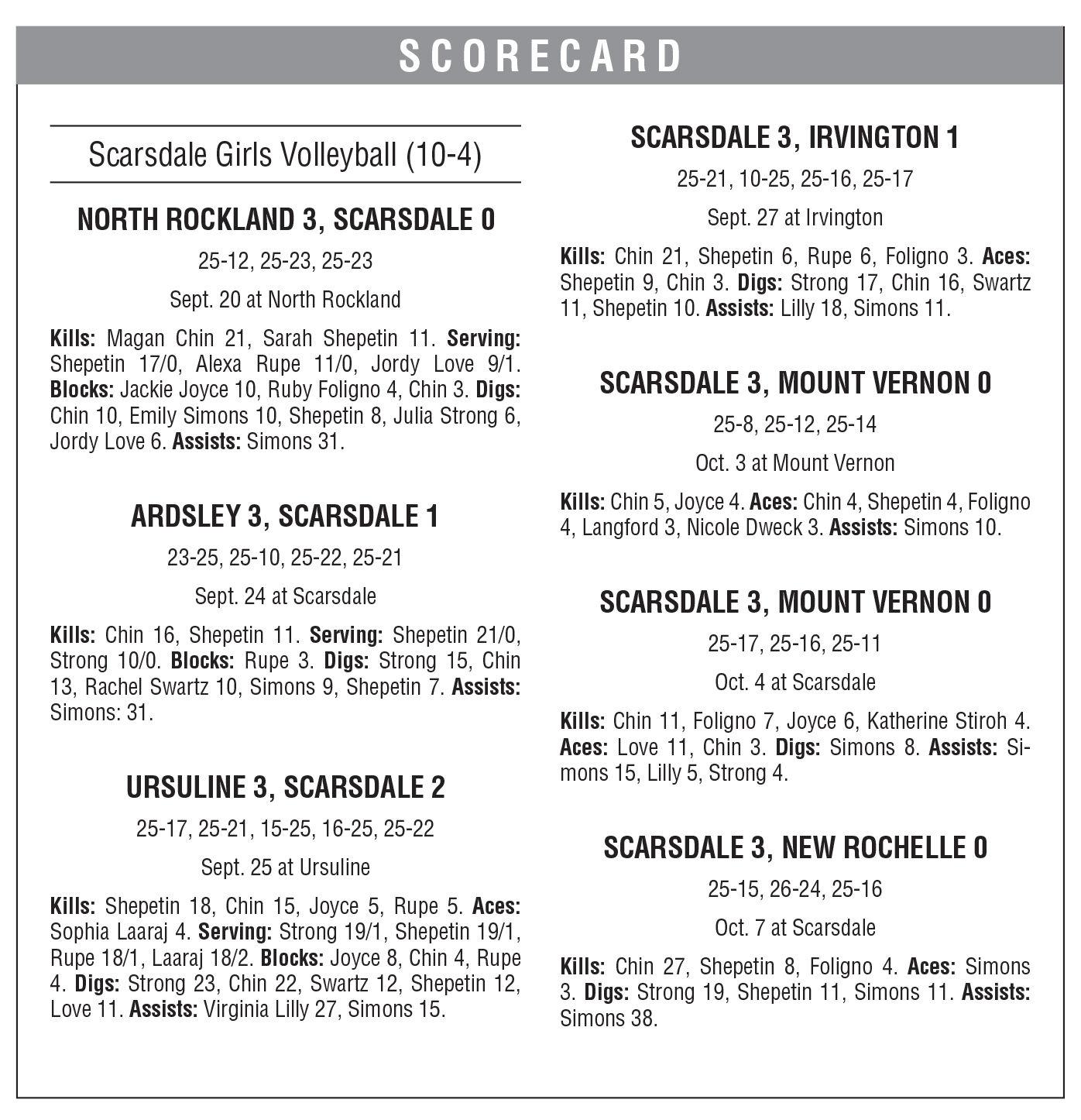 Julia Strong may not be a hashtag (#JuliaStrong), but her name very well could be as the term is often used to denote someone or something that has or vows to overcome adversity.

When Strong joined the Scarsdale junior varsity B girls volleyball team as a freshman, it was pretty much because there were enough uniforms and seats on the bench.

Varsity coach Ann Marie Nee was helping to coach JVB that fall because there was no coach early on. “She nearly didn’t make that team and we can joke about that now, but she didn’t have any volleyball skills to be quite honest,” Nee said. “She was completely new to the team.”

How did she make the team? “Well, we had room,” Nee admitted.

The JVB team was not strong that year and Nee remembers when the Raiders won a set — not a match, a set — against Mount Vernon, the first set the team had won to that point in the season.

“You would think we won the Super Bowl,” Nee said. “Julia was so impassioned and had such school spirit and was congratulating everybody. Her heart was in it. Her skills didn’t match yet, but her heart was in it and she lifted everybody up.”

Now, as a senior, Strong’s skills match her passion and she’s the starting libero, the backbone of the team’s defense and the start of the attack.

Libero is not a new position for Strong, though she said she would play anywhere her coach needed her to. It just so happens that libero is where the team needs her now. That could change, and Strong would adapt with ease.

“Libero is a really tough position because you have to be focused and you’re the director of the defense,” Nee said.

The position is a good fit for her personality. “I have so much fun,” she said. “I love being everywhere all over the court, diving. I like to be aggressive.”

Strong joined a club team freshman year, went to camps and came back sophomore year “totally transformed,” according to Nee. She was one of the few underclassmen on the varsity B team and earned a lot of playing time in the back row as libero and defensive specialist.

Strong made varsity as a junior and despite being “relentless” and getting “everything all over the court,” according to Nee, Strong saw limited playing time behind a talented senior class that included Abbie Vetrone, Maddie McDonald and Manya Kula. She responded by working even harder prior to senior year, playing every day over the summer, including with the Scarsdale program in the Pelham league. “She’s just someone who really, really loves volleyball,” Nee said.

Watching her in the summer league backed up all the text messages assistant coach Doug Zani had sent Nee about Strong’s club play.

“It wasn’t just that she could get the ball, but the fact that she made everyone else on the court feel better about whatever they were doing, good or bad,” Nee said. “It was that hope that they could do better all the time. That’s probably more of an important skill in volleyball than playing well yourself — it’s inspiring everyone else around you to play as a team and be in it together.”

Strong’s love of the game is second to none. “I just enjoy playing,” she said. “It’s not work to me. Anything to get my hands on a ball I did.”

The Raiders are using three setters this fall: senior Sophia Laaraj, who also plays right side; junior Virginia Lilly, who has played in key crunch time moments; and lone underclassman Emily Simons, a sophomore, who was called up last year when the team needed a setter.

“It’s a matter of are we getting everybody in the right position so we’re maximizing their skills and benefiting the team,” Nee said. “We want everyone to be successful. “Julia has skills as a setter, too. We were kind of messing around, but not really, because she has good hands. That’s important for libero because if the setter gets the first ball the libero gets the second ball and has to get the ball and know where the hitter needs it.

“We’re trying to get everyone to be volleyball players and not just a libero or an outside hitter or a middle. We want them able to do everything.”

“It was a hard schedule, boom, three really good teams in a row and we crumbled a little bit,” Strong said. “We got back up and we’re going to see what we can do. Ursuline was really close. Ardsley was really good.”

While North dominated the first set 25-12, Scarsdale lost narrowly 25-23 in the second and third sets.

“The prevailing feeling after North Rockland was we should have had that and what happened?” Nee said. “We had some assist errors. The game was very tightly called by the ref and that’s good — I’m glad she did that on both sides — but we have young setters and that hurt us.”

“We’ve never beaten Ardsley and we had a really good shot that day, too,” Nee said. “We took the first set and then the second set we were overconfident and then they came back swinging. The third and fourth sets were very close.

“That game was not tightly called at all on either team and it led to me getting a yellow card, which I never get. I felt somebody had to say something. It affected the outcome of the game and that’s when I get upset.

“I know officials have a very difficult job, but it was one of those things where how could you not see that? Or it was a do-over when it should have been our point. Or it was not clear but they gave the point to them and if I said anything I would get another yellow card and then I’m out the rest of the game and the next game, which was Ursuline. We just had to suck it up and do the best we could.”

One day later, Ursuline went to five games, with Scarsdale losing the first two, winning the third and fourth handily and falling 25-22 in a close fifth.

“We were a totally different team the [third and fourth] sets,” Nee said. “It was total domination on our part. The fifth set was a battle, very close and they won. We had momentum but couldn’t finish. The officiating there was loose.”

The Raiders had trouble finishing, despite showing fight in each match. They hope to learn from the losses.

“We need to learn to finish,” Strong said. “We always fall apart in the last set or give up. We play like we’re going to lose and we do lose. We have to be strong from the first point and push all the way through. We can’t have a rollercoaster like we’ve been having. We have to be solid and hopefully we can steamroll the next few games into sectionals and see how far we can get.”

Following the defeats, the Raiders topped Irvington, Mount Vernon twice and New Rochelle to improve to 10-4.

“When we work we play really well and we’re all best friends off the court and I think it really shows on the court,” Strong said. “We all know each other so well and we enjoy playing. It’s fun for everyone and we want to see how far we get this year.”

The Raiders head to the VolleyHall Classic in Massachusetts Monday for their usual late season “reset button,” as Nee called it.

“That’s a great time to really come together as a team, try things and play really hard volleyball for 12 hours on a Monday,” she said.

Like one of their newfound leaders, Julia Strong, senior-heavy Scarsdale hopes to find the strength to stand atop Section 1 in the coming weeks.